Describes how to make a lighting-based build that will get you to 20 minutes, and shows potential growth after you got the core of the build.

Note: This is a lighting-based build created by jorrit200 with his opinion.

for your character choose [Spark]

We start with spark because she has a 50% on hit to summon lightning, this will be required for the inf ammo build

for your gun choose [Dual SMGs]

this is for 4 reasons:

This gun has one major drawback, long reload time, but you should never have to reload again after the first boss.

This build works best with spark’s “Charged Up” upgrade 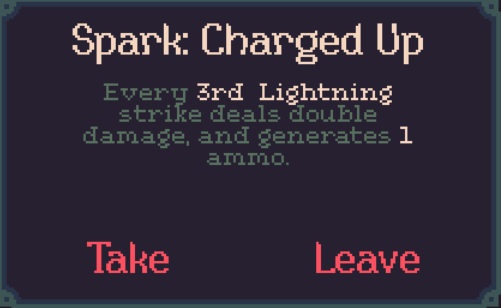 There is a 1 in 3 chance of getting this upgrade, If you dont get this upgrade, the build still works, but you’ll need to focus on bullets per shot upgrades (which are applied twice, so that is advised anyway)

TL;DR If you dont care about why this works, get these upgrades:

This is the core of the build, every thing depends on these few upgrades, so get them as soon as you see them.

Although the order in which you get these upgrades does of course not matter, the upgrades come from 2 paths and 1 is better on its own than the other, so lets start with the best one.

Path of the Electro mage 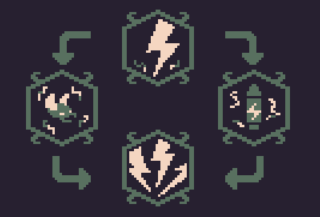 This upgrade summons lighting every time you shoot (the upgrade says every 2 shots, but the on shoot event triggers twice because you have 2 guns)

The second upgrade you want from this path is Energized

This upgrade gives you a 25% chance per lighting bolt to get back 3 ammo.

if you, at this point, already have gotten the “Charged Up” upgrade from the first boss and/or a few bullets per shot. Congratulations, you’ll never have to reload again in your life… until you win and have to start over…

If you already have the required part of the other path (“the quick hands path”), or those upgrades aren’t available, get the rest of this path as well, It upgrades lightning, and lightning will be your main source of damage for a while. 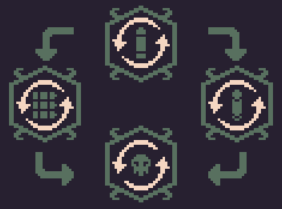 The only upgrade we want from this path is “Kill clip”
This is unfortunately the last one. I say unfortunate because the other 3 upgrades on this path are completely useless for this build.

This upgrade will increase your fire rate with each kill, this buff resets after reloading, but if you finish the core part of this build, that will never happen; Infinite fire rate? Unfortunately the fire rate seems to be capped, but the cap is pretty high. This does mean that you can get as many upgrades as you want that decrease fire rate as trade-of.

Do I really have INFINITE ammo (Math for boring people)

Technically? No. But you’d have to be really unlucky and/or really bad at aiming.
Lets see how much ammo you’d get back per shot on average, one shot takes 2 ammo, so if the average is 2 or higher, you’d need to be quite unlucky to go from 32 (34 if you took “armed and ready” to get to “kill clip”) all the way to 0.
Lets assume you get 2 hits per shot (the average is probably higher due to upgrades that increase bullets per shot).
You summon 1 lighting per shot, every lightning adds 0.75 (3 ammo / 4 shots on average to trigger) to the average ammo per shot, so this is the first 0.75.
Every third lighting bolt adds 1 ammo, so that’s 0.33 per shot. (total = 1.08)
But every hit has a 50% chance to summon lightning, so that’s another lightning per shot on average (assuming 2 hits), which adds another 0.75 ammo per shot on average, but these lightning bolts also count towards “charged up” which adds another 0.33 per shot. (total = 2.16)

Now where it gets crazy, and incalculable (for me at least) is when you get piercing, bounce, and/or splinter. Because if 1 bullet hits multiple enemies, it counts as multiple hits. And the bullets from enemies that die do also count towards hits. From this point on, the chances of even getting bellow 20 ammo are very small.

Don’t get these upgrades, even if they also qualify for the “Good” list

These upgrades work really well on this build

Thanks to jorrit200 for his great guide, all credit goes to his effort. you can also read the original guide from Steam Community. enjoy the game.