New to the Legends of Middle-Earth Easter Holiday Event this year? Take a look at this guide to discover what it’s all about, and how you can compete in this year’s community event!

What is the Easter Event?

The LOME Easter Holiday Event is a yearly tradition that started in 2020. The goal is to bring a competitive map for the community to play and compete for the highest score. It’s a fun holiday celebration, and it helps liven things up!

If you’re new to Legends of Middle-Earth, and would like to give the mod a try, you can find it right here on the workshop! You can also join the LOME Steam Group for updates, and find other players interested in the mod!

This year’s map is a single player survival based map about keeping your Easter Eggs safe and sound from angry, egg smashing orcs! 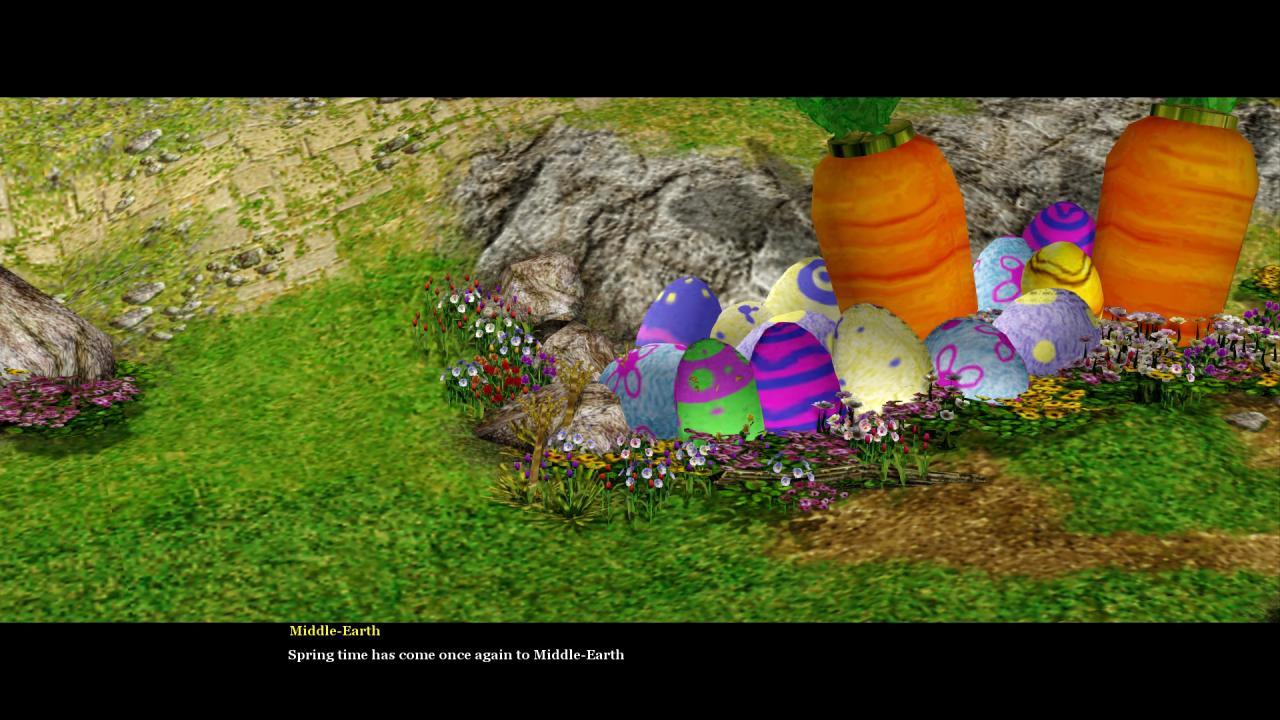 How do I find the map?

The map has been included with a content update as of March 1st, 2021. You can find the map by navigating to Single Player > Campaigns > Holiday Events > Easter 2021
There are no difficulty settings for this map, so the option will not make a difference during the game. 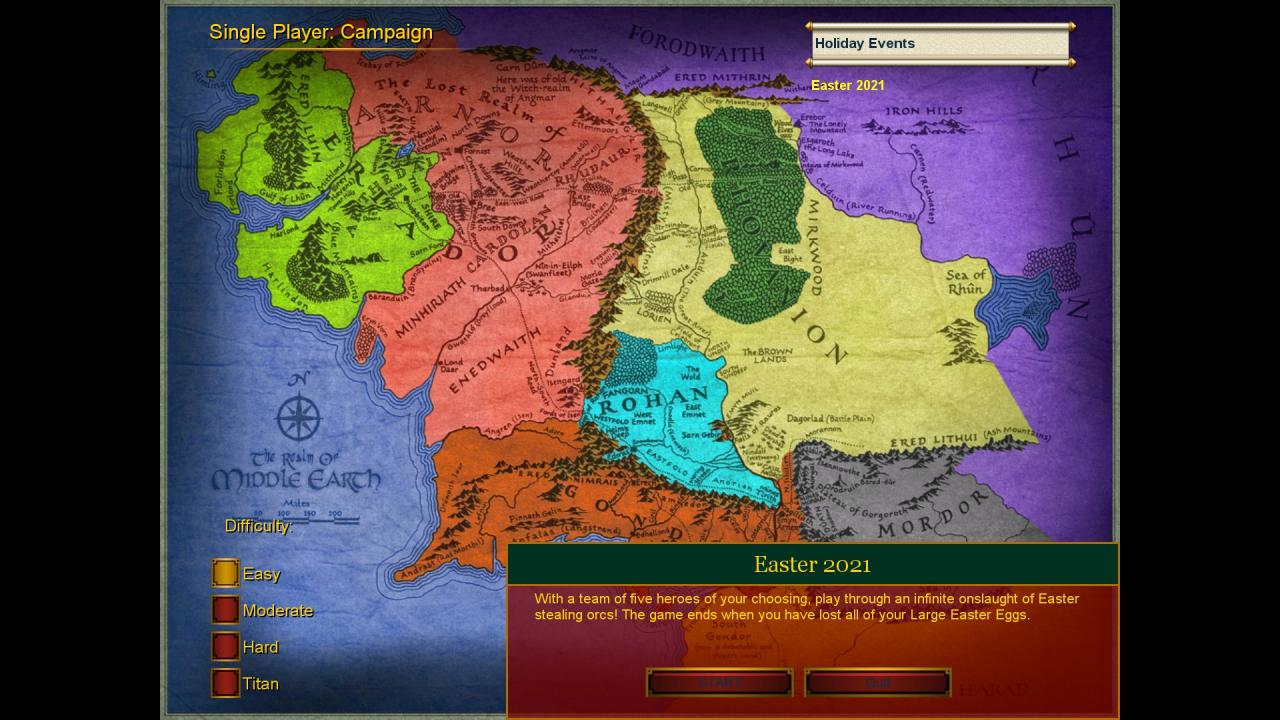 IT IS VERY IMPORTANT TO RUN THE MAP FROM THE CAMPAIGN LISTING, AND NOT THE EDITOR! The map is programmed with some anti-cheat measures, and will explode if you try to run it from the Editor.

Starting off the map is simple! After the cutscene, you’ll be presented with a pool of heroes, of which, you are allowed to pick five of to be your team! To choose your team, place five heroes at once into the Sky Passage, and cast the “Rain” god power!

There are a lot of choices to pick from, and it’s recommended to strike a balance, with at least one healer, two ranged, and two melee, but don’t feel afraid to experiment! 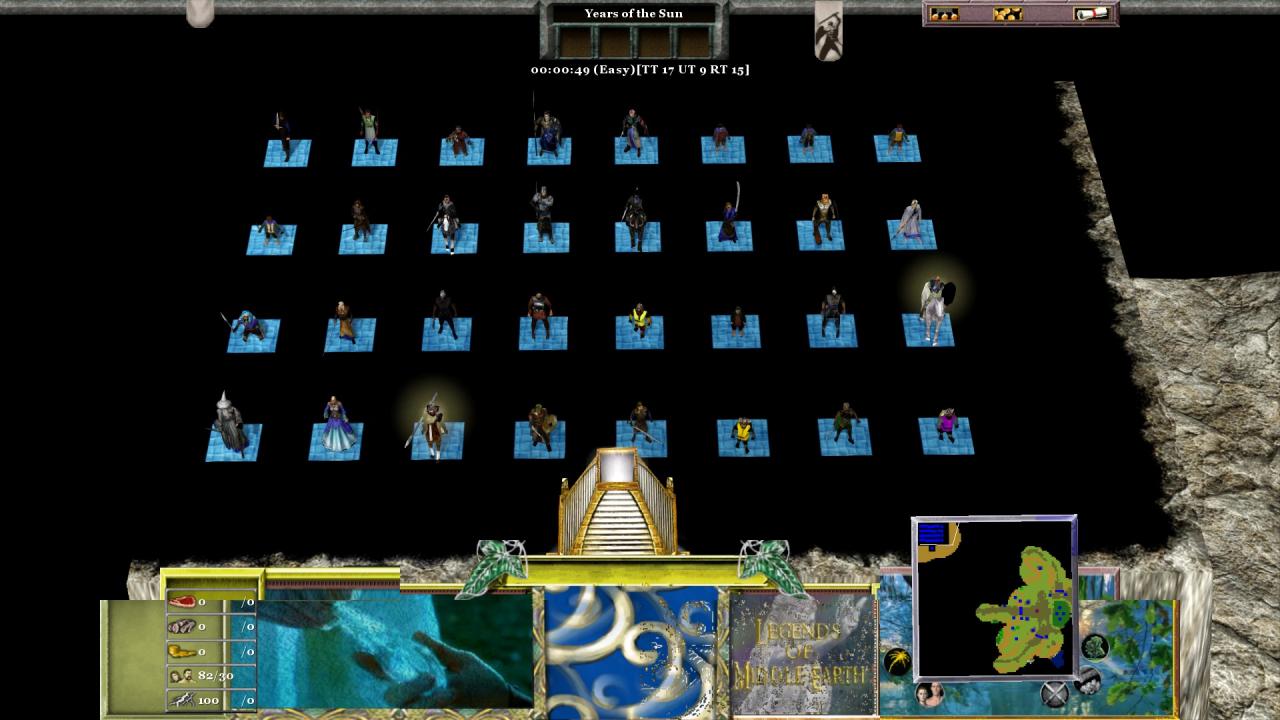 TIP: You can form specialized teams by picking from a “theme” of heroes. Try forming a team of all Dwarves, Elves, Hobbits, etc! These special team compositions will give you a unique bonus throughout the run! There are several combinations you’ll have to think out! Give them all a try!

Once your team has been chosen, you will be teleported away, and the game will begin!

Waves of enemies will begin to march their way to your Easter Eggs, prepare to defend them! You’re not alone to start with, as gates and towers will complicate their advances. Over time, the waves will become stronger, and harder to deal with. Mobility is often key! 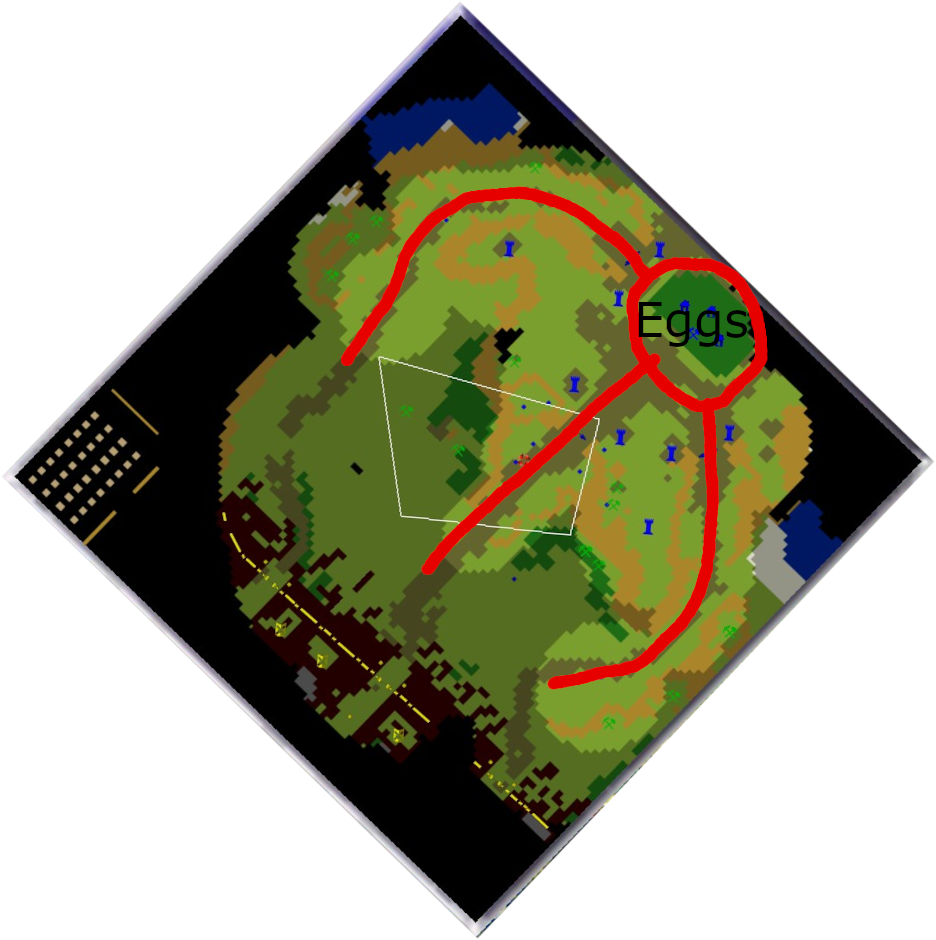 There are three notable avenues to your base, all of which will be periodically attacked by enemy waves.

TIP: Create a unit group army for each one of your heroes to keep track of them!

As the waves go by, you’ll eventually fight a boss! Much bigger, and stronger than normal units, a boss will pose a greater threat, and once they are defeated, their unit type will join the ranks of the enemy as normal units. For example, defeating the Warg boss will cause Warg type enemies to join the enemy attack waves! 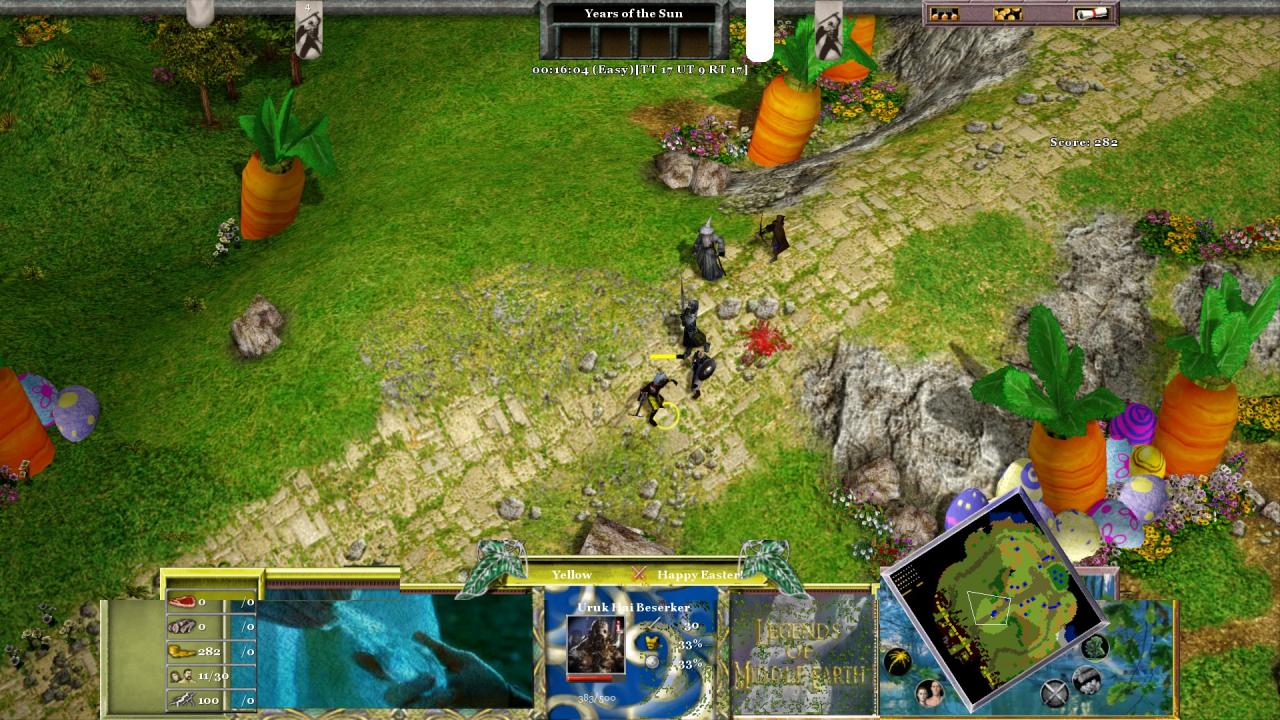 Upgrading
After some time fighting, you’ll earn a quick biscuit break, in which you will be able to think about how to spend your gold with a little bit more ease. During a break, a villager will spawn, and if you have enough gold, you may build an Armoury to instantly Age Up. Aging Up will allow you to access the next tier of upgrades. 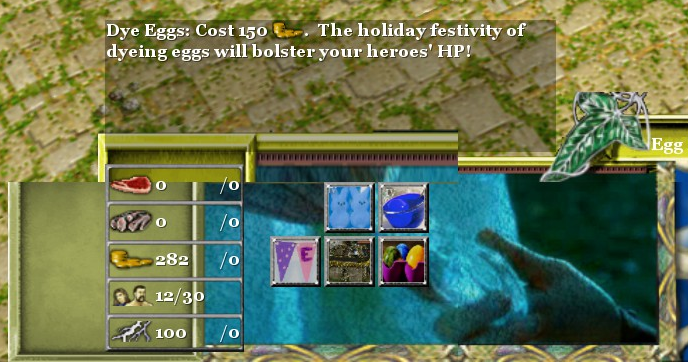 There are two different types of upgrades, on the top row are smaller upgrades which offer basic bonuses in either attack speed, HP, or damage to your heroes. The bottom row of upgrades tend to be a bit more complex. In each age, you will have the chance to choose only one of the three bottom upgrades, so choose wisely!
In order to find these upgrades, you must select the special Easter Armoury building! Unmistable by its blue colour, with flowers painted on it!

Entering Into the Contest

The goal of the Event is not to win, but rather, score as high as possible, and there will inevitably be a game over for you. When this happens, you will be presented with your final score, and a camera cut of a bunch of boats. These boats are a tally of your final score, and you will need to take a screenshot of your score when it shows up here. You can do this several ways, through ctrl+printscreen, OR by taking a Steam screenshot. The default screenshot key is F12. 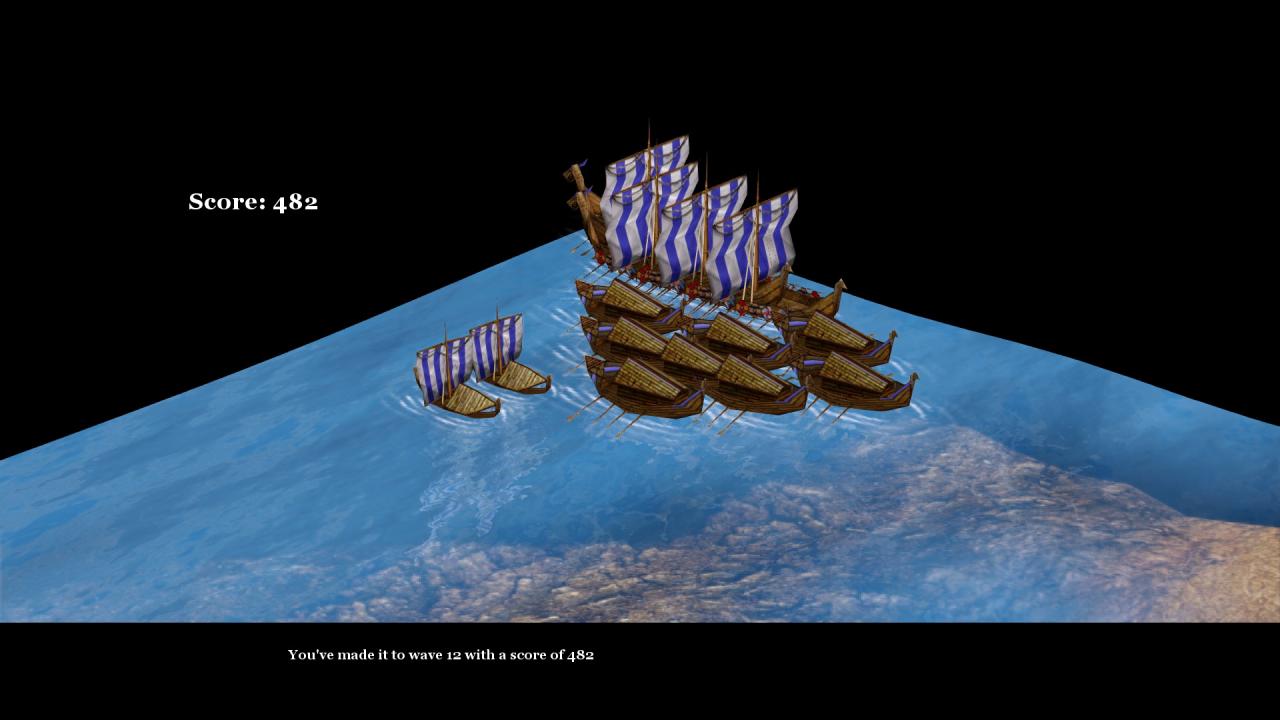 In order to enter your screenshot, you must first be in the LOME Discord, which you can join via this link here[discord.gg]. Once you have joined the Discord, you will simply need to select your role, and the Discord will become unlocked. Currently, there is an occasional bug with the bot not assigning a role, if this becomes too much of a problem, I will have the role requirements disabled, so don’t be afraid to stop by!
If you are already in the LOME Discord, then all you need to do is post your screenshot into a special channel called “contests-channel”

There is no limit to how many time you can enter a screenshot. If you have improved your score from your last submission, then feel free to enter a new screenshot! It just has to be done before the contest’s deadline on May 1st!

Remember to report anything that isn’t working right, and let me know what you think about the Easter themed event! And a big thanks to NickonHawk for taking this map under his wing and helping me out with its creation!