The Bare Minimum for Xiandao Cultivation and a few Headers

Xiandao Golden Core Cultivation is the Starting Law for any playthrough and most likely the more complex and detailed path to immortality, I’ll try to address the core mechanics for it.

TL;DR Use the Manual Pavilion

At its core Xiandao is easy to progress, you just sit down and cultivate until you reach a limit, breakthrough the limit and move on until immortality.
Xiandao Cultivators go through 5 stages:

Every law has a different progression and when choosing one for the cultivator you’ll be briefly informed of what that law has in store for you, like the seven slaughtering that has to face multiple tribulations in cultivation, or the reincarnation law that loses its power after the start of each phase
I’ll talk a bit more about tribulations and golden core in a later section

When compared to the other Cultivation methods, Xiandao shines because of one thing, sharing knowledge, you can obtain buffs and skills from any other Xiandao Law by using the Manual Pavilion Building (Located in the sect section of the build menu), to use it effectively ensures you get the most of your Xiandao Cultivator, you’ll want to build many of those early, transcribing every Supreme Law you have and hunting down the other Supreme Laws and Primordial Spirit Laws

You start off with only the supreme law chosen on the character creation (pick heaven stealing, hardest to get later), but on the first few events (Secrets) on the game you gain access to the complete 5 supreme laws from the Taiyi Sect:

You can get the Supreme Laws from the Kunlun Competition, which happens roughly yearly on the game, winning it is hard early on but after getting a “Primordial Spirit Cultivator with Max Luck and Maxed out on the Tiered Knowledge (bottom left of Skill Panel)” you’ll be winning those competitions with ease

The other kinds of Law asides from Supreme (Primordial Spirit, Ascension, etc) are also very important on getting a strong Xiandao Cultivator since they bring A LOT of knowledge to learn, most of it being very useful, like the protection and spell knowledge, the extra stat buffing ones and the stamina knowledge

There are 2 major ways to get these Laws, the easier way is to learn from unconscious enemies, every cultivator that attacks your sect has a Law, and almost everytime it will be a Law you’ve never seen before, you can get those Laws from them through two methods, either you take the unconscious enemy into your sect, using the Incantation of Consonance Miracle, raise his Loyalty by keeping his mood up (regrowing lost limbs, giving a weapon and artifact or just spamming panacea on them until the stacks of “A Miracle” work his mood up), when Loyalty reaches 100 the cultivator shares the Law with you, you can then add it to your Manual Pavillon. The other way of getting the Law is on taking a dying enemy to a very bad feng shui room (Hell Gate) and using the Soul Inquiry Miracle, which will likely get you his law and some evil sect reputation 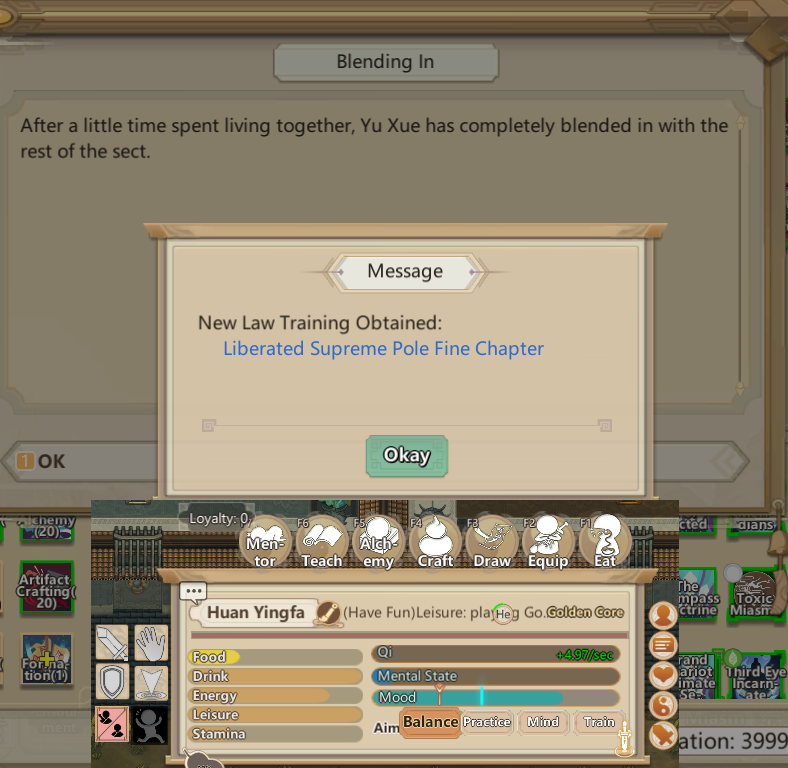 Loyalty and opening up to the Law

About Inspiration XP, the cost of learning something will rise for each thing you learn, its connected to a number called “Attainment”, viewable on the cultivator stat panel, while high attainment is needed for some events its usually not desirable to have since anything will cost absurd numbers of XP, to avoid high Attainment don’t acquire knowledge that is marked with COUNTERACTIVE when you hover over it, you’ll notice that the attainment increase is much higher than it should be, which knowledge will carry this tag is related to the cultivation law, to easily obtain a lot of inspiration XP work with the power tab and offices in other locations, I’ll go over this in another guide, without these XP is very hard to come by 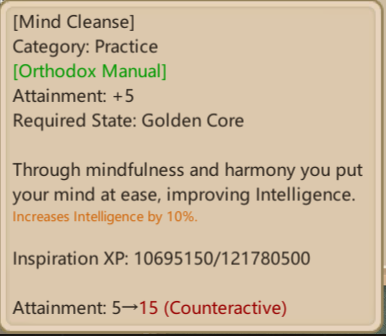 There are other methods for obtaining supreme laws, such as ancient caskets obtainable through mining, I would consider caskets farmable because of the Mountain shaping miracle, that spawns ores back on the map so you can mine them, you can also obtain supreme laws through the event “Manifesting Mandate”, the event is rare and you’ll obtain the law if you’re compatible with it, choose the second option and spam it with different cultivators until you obtain it, or just have a “jack of all trades” cultivator get it. the only supreme law not obtainable through the kunlun festival (Heaven Stealing Law, which develops around lifespan), can be found in these methods 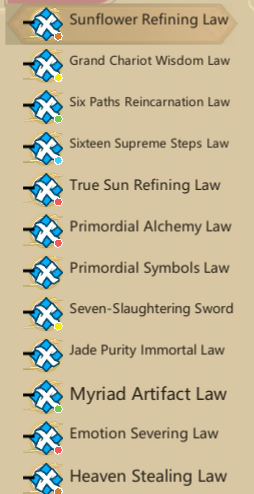 The highlight of cultivation progression is the creation of the Golden Core, its importance is connected to the importance of a high Max Qi pool, since Qi is essentially a Xiandao Cultivator HP and MP stat, a high tier Golden Core carries a far higher base Qi which turns into a very large ammount of Qi after every Max Qi buff you carry

While molding the core the cultivator uses all its available Qi to the best of its skill to create a better core, usually the best result you can get is a GC Tier-1, but the process keeps going after tier 1 so there’s not much of a clear limit, however Tier-1 is still the best you can get without minmaxing way too much

Before anything boost the Max Qi of your cultivator to the highest you can, the easiest way to increase is through Manuals from the Manual Pavilion (use the search function, IT WORKS just type “Max Qi” there) and use certain elixirs, some easily available and some not, detailed bellow

All of these items have their performance increased when Spectre Refined (Spectre Refining Miracle, uses Anguish Soul Gem), but this usually costs too much and takes a lot of time, you might not want to minmax that much

There’s also some sort of glitch to get a bit extra Qi on your cultivator WHILE he’s going through golden core shaping. by keeping the banned spiritwood in the positions shown in the room example above they naturally gather Qi, when you start the golden core forming you’ll wait one hour from the start and place a Tictactoe building right on top of ONE banned spiritwood, you should do this every hour until the 4 spiritwood have “jumped” (you’ll notice the little jump when you place the Tic-tac-toe), the Qi from the spiritwood will hop through the room and your cultivator will benefit from it, you might get a T1 from an estimated T2 this way

The easy part, cultivation is simply sitting down for a long while and filling the required Qi, there’s just a few mechanics that you should be mindful of

The other cultivation buffs are mostly explained in the Golden Core part, so do check it out.

You shouldn’t worry too much about the heavenly tribulations, what you will see is a thunderstorm hitting your cultivator a few times and then its gone, but in order to not lose the cultivator you should do a few things 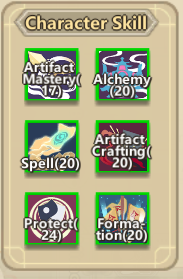 The Skills, bottom-left of the manual inspiration menu

Thanks to Locksmith for his great guide, all credit to his effort. you can also read the original guide from Steam Community. enjoy the game.

Since the number of hints I can give in the game are limited, I decided to make a walkthrough in case someone gets seriously stuck. Spoiler...

The game has several major concepts and the guide will be broken up similarly. I'm not putting a ton of effort into making this guide...

This guide shows you every new detail in the new Halloween-themed lobby! From secret messages on the walls, to even jumpscares! Though if...

A detailed how to guide on completing all the Achievements for The Corridor. Includes videos for each Achievement.   Reverse...