Video Guide to the Kerensky Achievement

As you can see from this image, I managed to obtain the Kerensky Rank. I actually achieved the rank at day 120, and then proceeded to a perfect score at day 45.

In the video guide, I’ve included all the tips, rules, and strategies that helped me achieve this rank. I hope it helps you. 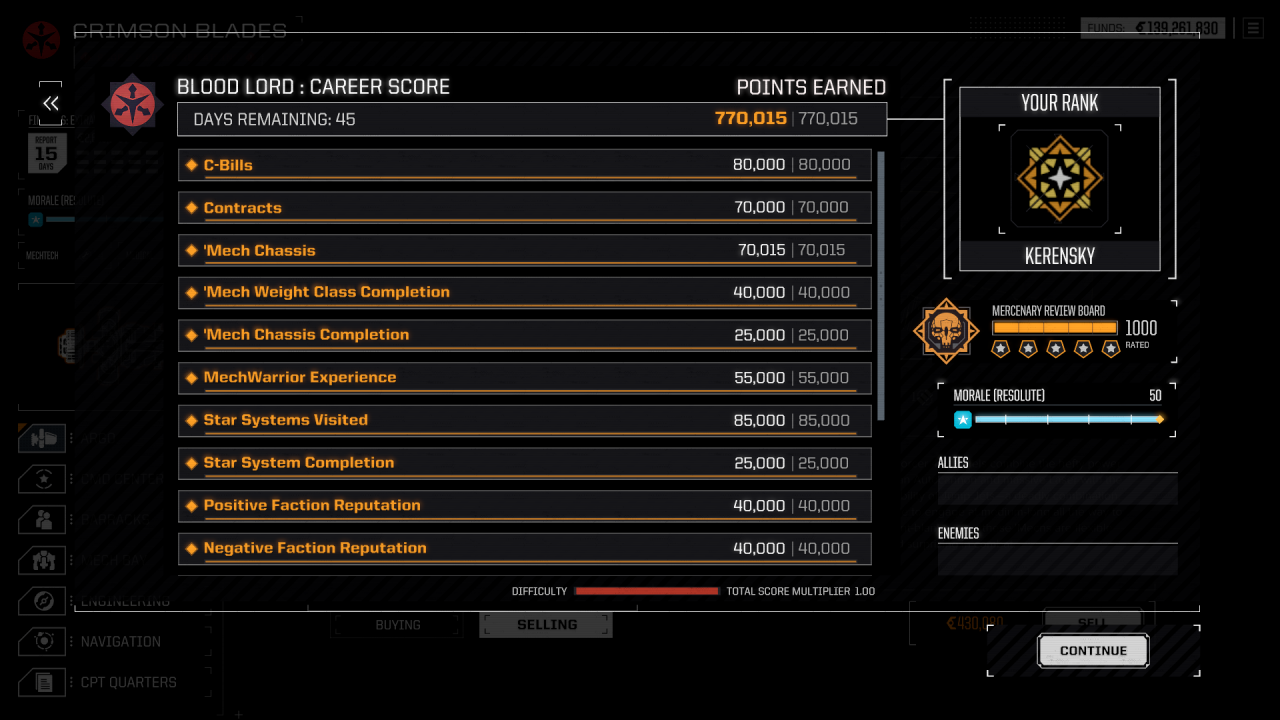 Since folks often ask about these first, here’s the settings. I cover them in the video guide as well, but for a lot of folks this is all they care about, so here they are:

Kerensky is basically impossible if you don’t do this

I had my Argo drives fully upgraded by day 820, so every system I stopped at after that point had the shortest distance possible. It was probably possible to get this done sooner.

Tougher mechs get you better chances to earn Heavies early. Mitigate this danger by sticking to 1/2 skull systems until you can outright buy your first Heavy, a Marauder 3R. When your pilot skills catch up and you get first real sniper (Someone with Gunnery 10 and Tacticts 9 for Called Shot Mastery) then all of a sudden you’ll be gunning this harder mech forces down, and earning all kinds of scrap.

None of your mechs should ever get so hurt their center torso goes ‘boom’. If any of your pilots die, it should be to an unlucky headshot.

This is critical for the C-Bills. Can’t get Kerensky without it.

You’ll still find some, but your best Mechwarriors are going to be the folks you start with who earn the early XP. I never worry about this too much, because the Training Pods give your greenhorns a decent leg up, and the way I play (using Catapults and Stalkers on middle-tier missions) ensures my greenhorns can contribute and earn XP.

You need this money early on, so don’t go Stingy and try to trade for some other difficulty choice. In the early game, this is how I was able to farm just the 1/2 skull systems for cash and outright BUY a Marauder. It would have taken me a lot longer to salvage a Heavy mech through combat, and I’m sure I’d have lost a pilot or two in the process. Doing it this way, I end up with a Heavy Mech that headshots, and living pilots with several missions of XP to poke into necessary skills.

They’ll earn more than enough XP over time. Really, it’s about getting your early pilots XP, leveling them up, and not having them die. They become the base for everything else you do. Then you can mix in the greenhorns on easier missions and gradually the whole crew grows up.

I want the rare salvaged parts to outfit the naked Mechs I’ll assemble. Getting + and ++ weapons from salvage really helps, I feel. Plus they sell well.

Thanks to ColorsFade for his great guide, all credit to his effort. you can also read the original guide from Steam Community. enjoy the game.