Blood of Steel: Armour Guide (How to Make A Good One)

In this guide I gonna describe how to make a good armour set up.

1.Open armour interface
Go to the main menue and click on the left side on “Hero Gallery”. Then click on “Armour” and you should see this interface: 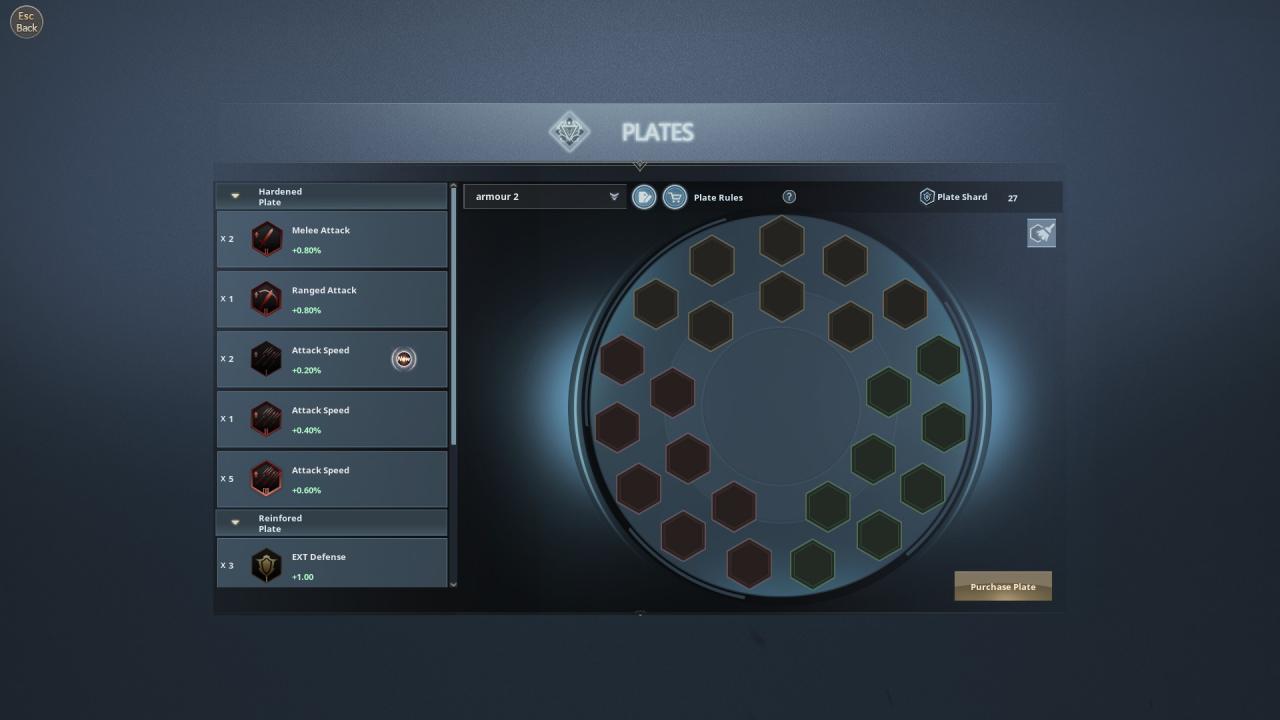 2.Buy Armour Plates
Click on the “purchase Plate” button on the right side to open the Armour Plate store. 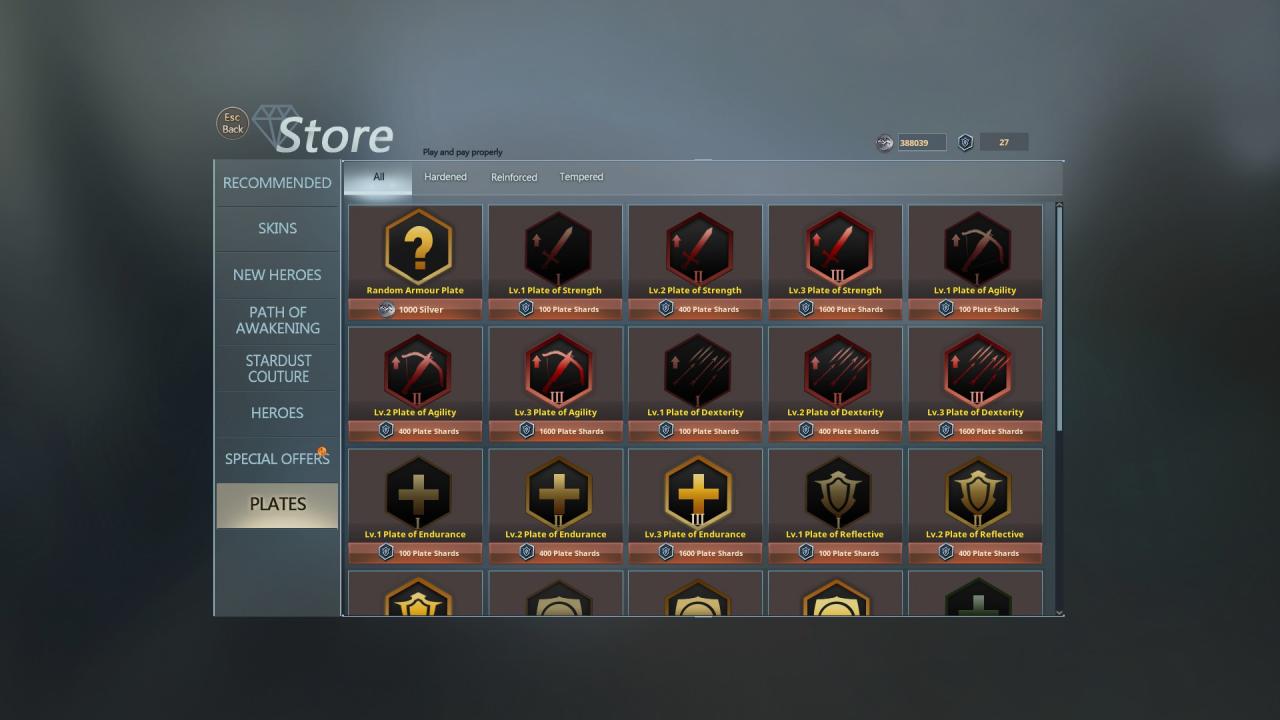 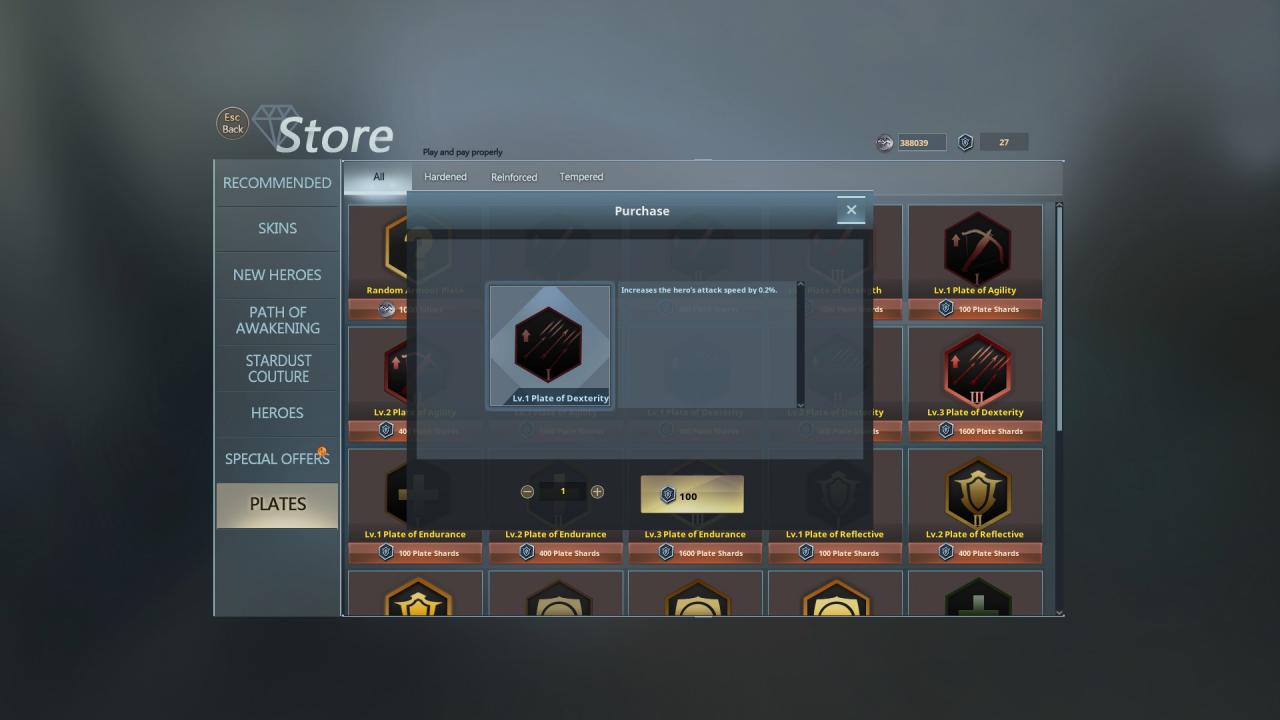 In this example I clicked on the “Plate of Dexterity” level 1 and we can see it boosts our attack speed by 0.2%. If you click on the golden button you are going to buy the selected Plate. Buy now one level 1 armour plate of your choice.
3.Insert the Armour Plates
After you have bought a plate click on escape to get back to the Armour interface. 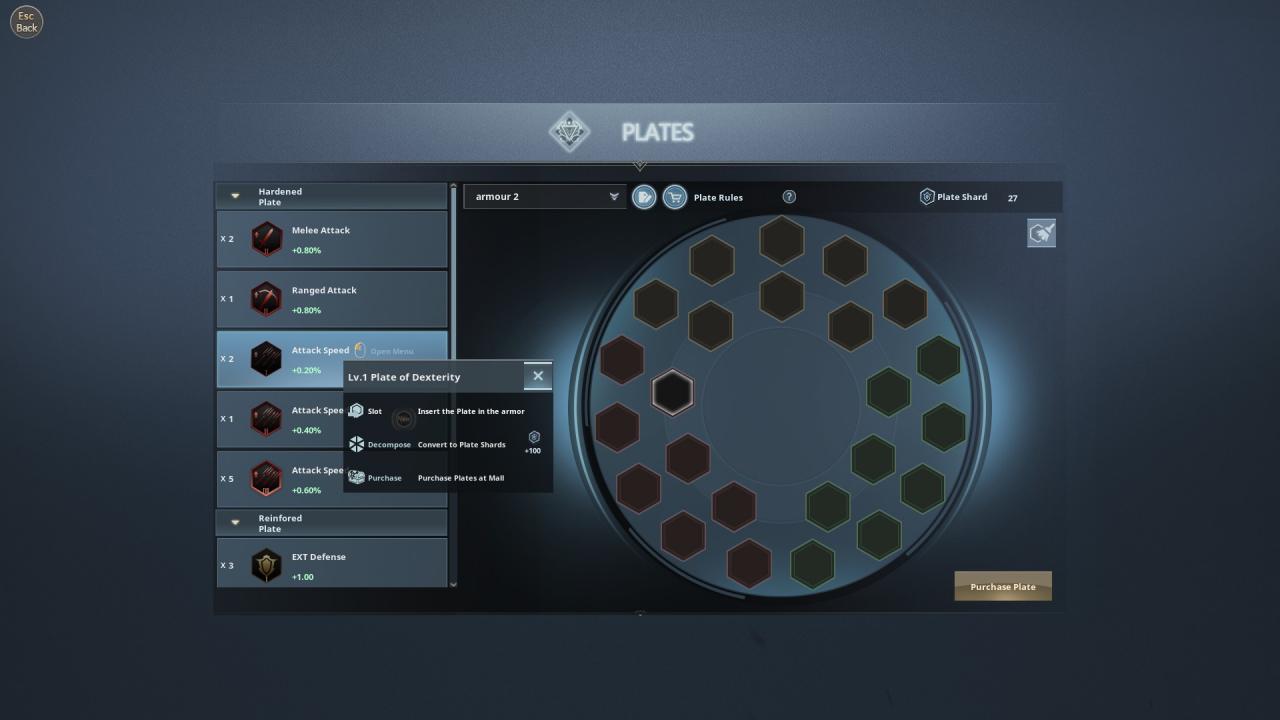 If you do now a left click on the Armour Plate a small menue opens up with 3 options. Click on “Insert the Plate in the armor” to fill one of the slots. You will now use this Armour Plate and get the effects in the battle when using it. You could also do a right click for a fast insert. Also by right click you can remove armour plates by clicking on them in the slots or use the “Unload All Plates” button to remove all plates and they will appear again on the left side.
4.Decompose Armour Plates
As you remember we could open a small menue when we left clicked on Armour plate on the left side. The second option in this menue is called “Decompose”. If you click on that button you are going to lose your armour plate and receive some plate shards again for it. Here are the decompose stats for the different levels of the Armour plates:

5.Categories, Effects And Recommendation
As you can see our armour has 24 slots, 8 for each category. We have red, yellow and green Armour Plates.

Recommendation: My personal favourite is the “Plate of Dexterity”. As I often play warrior I found it really useful against troops and especially enemy heroes. As melee hero you already deal alot damage and sometimes you get overkill on units, so more attack speed allows you to attack more units within the same time. Especially when it comes to a duel situation between 2 heroes the “Plate of Dexterity” shows effect. If you have higher attack speed than your opponent your hits will interrupt your opponents attack, so even if your opponent has a super high melee attack he can not win if you always attack faster and he can’t strike himself. But not only for melee heroes, but also for rangers this plate can pay off very well. In a ranged combat the side that takes out opponents faster gonna take the victory. I also thought of that ranged units can fire on command. So if you increase your attack speed and your soldiers always fire together with you, you maybe even increase with that the attack speed of your entire unit. But I don’t have any proof for that, it is just a suggestion. However “Plate of Dexterity” is the best for ranged and melee heroes in my opinion and should be taken at first to fill the red slots(if you later have many plate shards, that you can afford other Armour comps feel free to try it) 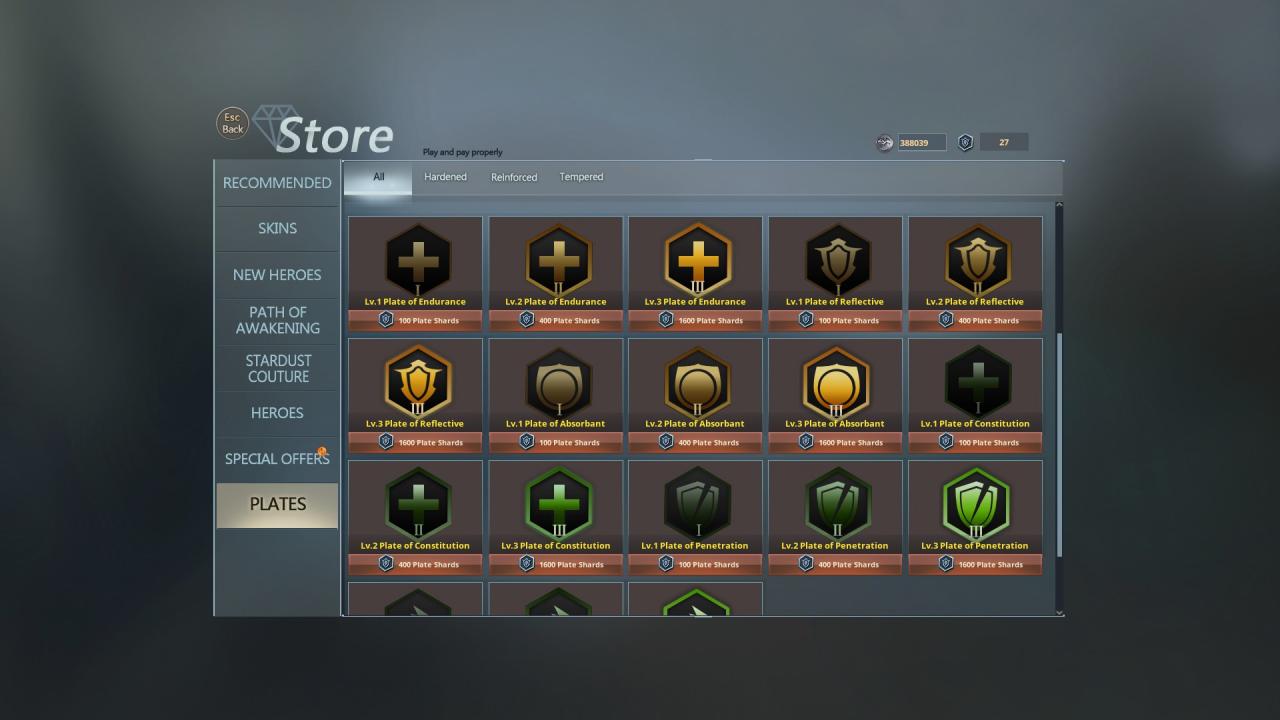 The yellow Armour plates are used to enhance your survivability. The “Plate of Endurance” increase the heroes max. health points by a fixed amount. This can be good for heroes with ranged units as they tend to have a low amount of max. HP. The “Plate of Reflective” increase your armour stats and gives an extra protection bonus against stab damage (down attacks). The “Plate of Absorbant” also increase the armour stats and gives a protection bonus against blunt damage (crushing damage, dealt by heavy weapon units such as the Hammer Vanguard of Frederick I and some lancers). 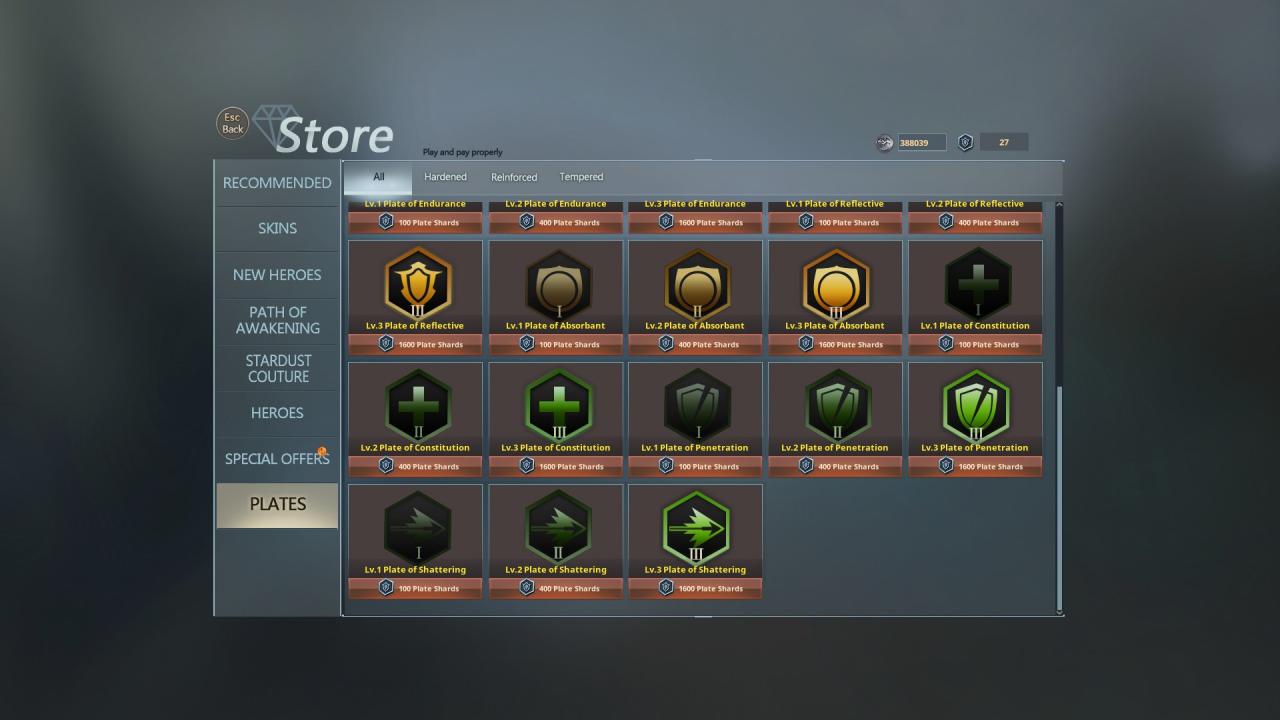 Recommendation: My favourite is the “Plate of Penetration”, because with my playstyle I am not in the need of an increased amount of max. HP so higher damage against soldiers can never be wrong. But why the bonus against external defence? Well you can look into hero statistics to find out in which way they are armoured like in this picture: 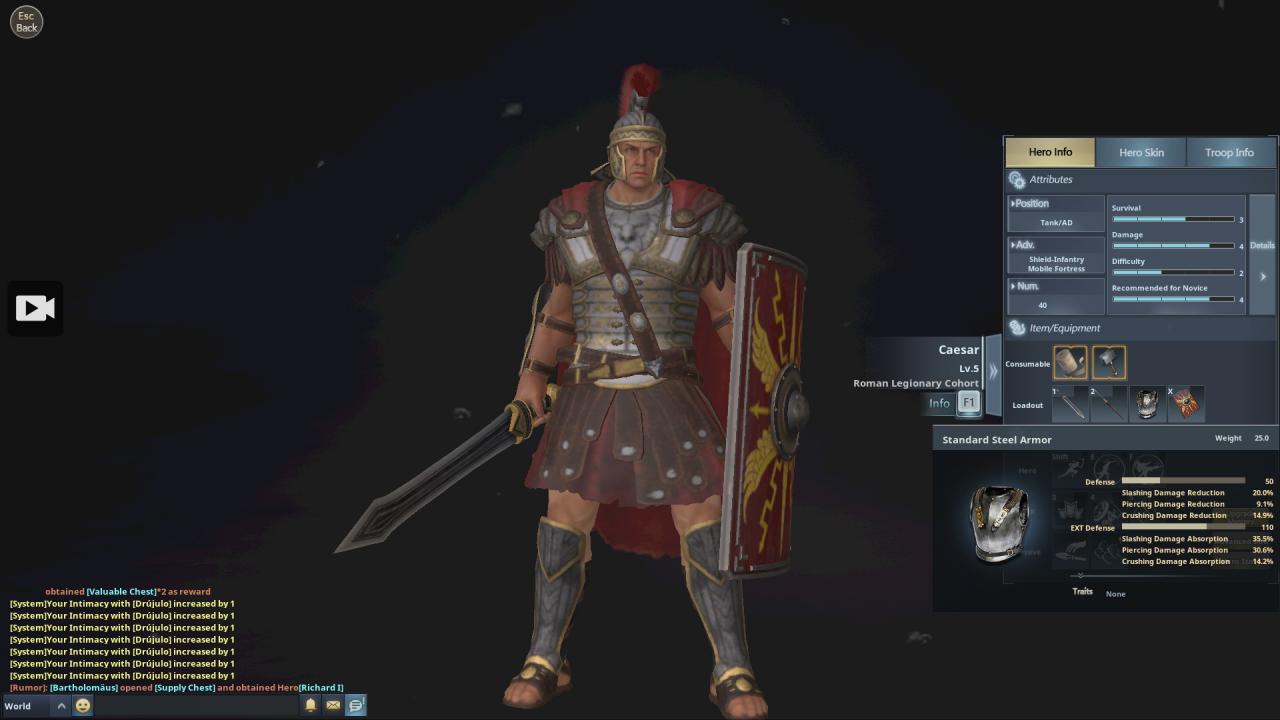 I have chosen Cesar, because he is one of the most played heroes in the game and many well armoured heroes(and soldiers) have similiar stats. You can see his external defence is way higher than his internal defence. So I assume (not sure) that the bonus against armour is granted in a percentage amount. So it should be way more effective to go against the higher number (external) than the lower (internal) one. I just know that increased max. HP don’t seem worth for me, because even if you have 8 times level 3 Armour plates you increase in Cesar example the max. HP by 84 (875max. HP x 8 x 0.012) and he has one of the highes max. HP. 84 is actually not that bad, but against most other heroes it means you can just receive one more hit before you would die. For me 1 more hit does not compare to increased damage of a hero against units.

6.Good advice
As you know now the plate effects you decide for yourself which plates you want to insert in your armour. If you are a new player I recommend this methods:
7.End
I told you know my knowledge about Armour plates. Still keep in mind that not everything I mentioned is a fact, but my view on some things. I have my biggest uncertainty with external and internal defence. Another explanation for this differentiation between those 2 types I heard from someone is that external and internal show the defence ability against melee (external) and ranged (internal) attacks. That would be a contradiction to the Armour Plates description, but as translation errors are quite common there is no safety to anything. So feel free to comment your experiences and tell me that I was talking mad ♥♥♥♥ 😛
By Trebor797

This is a build for the Mage class. This is a Mana-Stacker build that scales based off the number of enemies you...

Good day guys! This is complete list of current available Slorm Reapers (Weapons) for all 3...