In this guide, I’ll help you defeat the Core without taking any hits, I’ll detail the attack patterns and explain how you should react. The Core is the toughest boss during a Hard Mode run and you should be prepared to die multiple times.

Preparations
You will have to use two weapons during the fight, one for attack, either Polar Star or Machinigun and a defense weapon, the level two Blade, to lower the blade level go back to the maze and take damage to the white enemies, they only deal one point of damage, this is important in hard mode, remember to go down to the end of the exp bar or you will eventually level up with the exp dropped in the fight. The level 3 Blade sucks, it’s RNG based and will let you die.

THINK FAST WHILE CHANGING WEAPONS, with the Polar Star you will spam the fire button but with the Blade you will be more punctual with your shots, know which weapon you are currently using all the time and know which button to press whenever you change for one of the weapons. 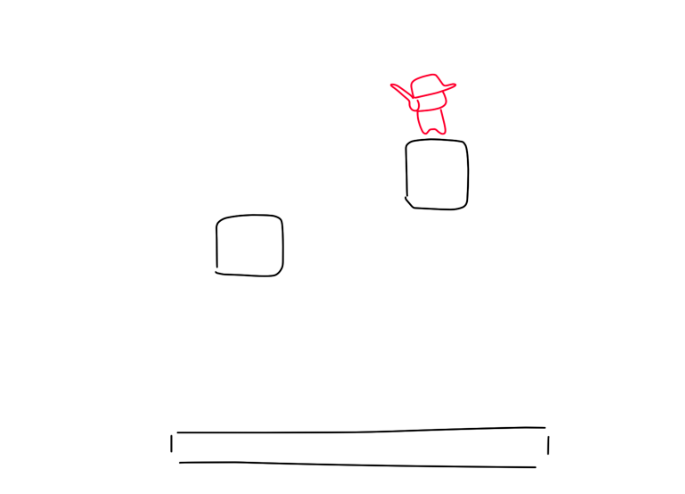 At the beginning of the fight, quickly run to the right side of the room and position yourself on this platform, equip the Polar Star or the Blade, you will start all your attempts like this.
Patterns and how to react
First you must understand the fight itself, the Core doesn’t fight alone as you may already know, their fragments also attack you and during hard mode they can screw you more than the main part of the boss, the Core fight pattern is basically: at the start the core is invulnerable each of the fragments fires two shots that are aimed at you, after that they change the battle position, the Core opens it’s eyes, attacks you, then the fragments fires for the second time, after the final wave of attacks they change the position again and everything repeats, I’ll call this pattern a “Wave”. After one full wave the water level increases and lasts other full wave, after four waves the Core will blows you away and shots three big spheres. in short you will deal with a lot of ♥♥♥♥.

Starting with fragments and luck draws, do you remember when I said that the fragments changes the battle position during waves? this position is random and based on rng, you will have to deal with some position types that I will mention below.

Surrounded
The five fragments will surround you from all directions, in this situation you can dodge by jumping and hitting some of the shots with the blade, if the core is attacking , this will be very risky, I recommend retreating if you want to play it safe.

Horizontally
In this formation the fragments will be aligned horizontally, arguably the best formation to deal with, play aggressively switching between the blade to defend and the polar star to attack, maybe some fragment will be a little above you, in this case it is recommended to jump and shoot it away with the polar star.

Random positions at the top or bottom
It is very easy to dodge jumping at the right moments, if you are not confident there is always the option to shoot with the blade both up and down.

The Second Phase
After a few waves you are thrown back and you will have to reposition yourself in the left part of the arena, in this part you will have a horizontal platform with plenty of space to avoid shots, apply everything you learned in the first phase but try not to retreat too far, otherwise you will lose ground, pay close attention to the shots coming from below, don’t get cocky and dodge even if you don’t think you need to. If you managed to get here the victory is close, be VERY aggressive not to lose ground and run out of space to retreat when necessary.

Thanks to DárioSparks for his great guide, all credit to his effort. you can also read the original guide from Steam Community. enjoy the game.