Strategies that help keep RNG from ruining your runs. Includes how to find Hidden Chests.

2. Using ID Scrolls
Use them to find your lifting scrolls. After that, I tend to ID my scrolls first then potions. 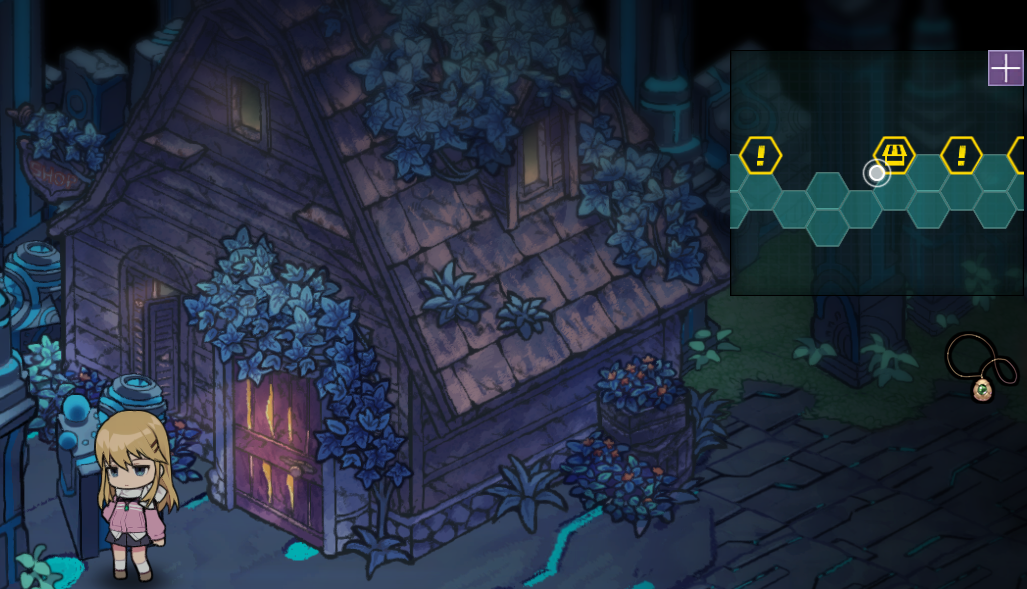 ALWAYS buy all the keys until you have enough to get through the White Grave stage (3-1). If RNG grants you a key as a drop, make sure you still buy all the keys since some shops only offer 1.
Buy lifting scrolls so you have at least 1 per stage, and buy ID scrolls since they’re cheaper than using the shop ID. Also buy the white Skill Book if you have enough.

Hasty Counter is typically the best of the frequent skills. Effective Plan is pretty rare. Otherwise Fan Out, Ray of Light, and other character draw skills are pretty decent. 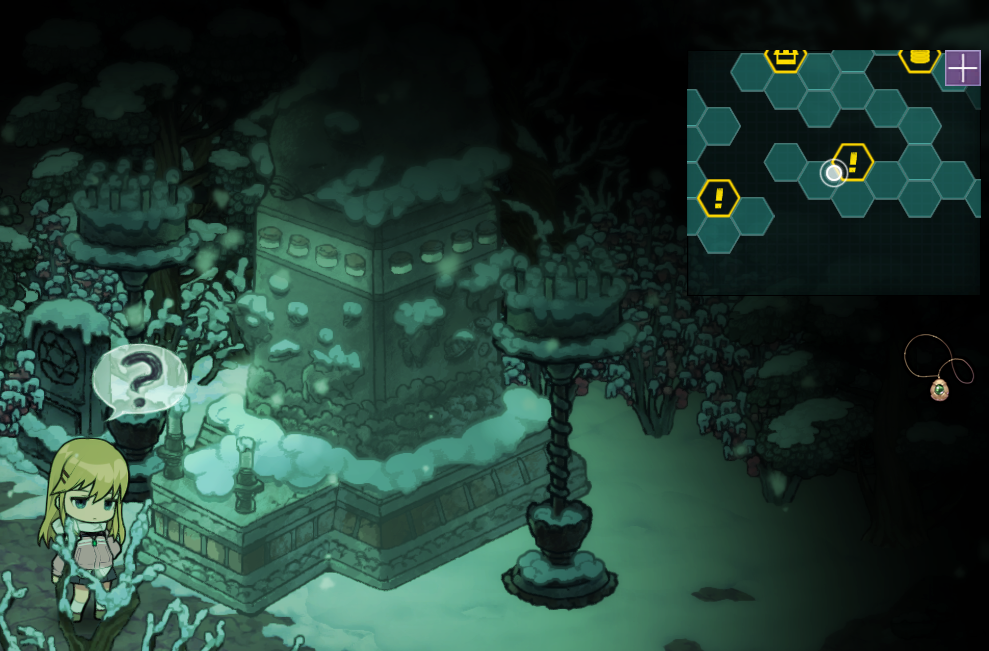 I always use all my bread. Possible item drops and gold are worth it. 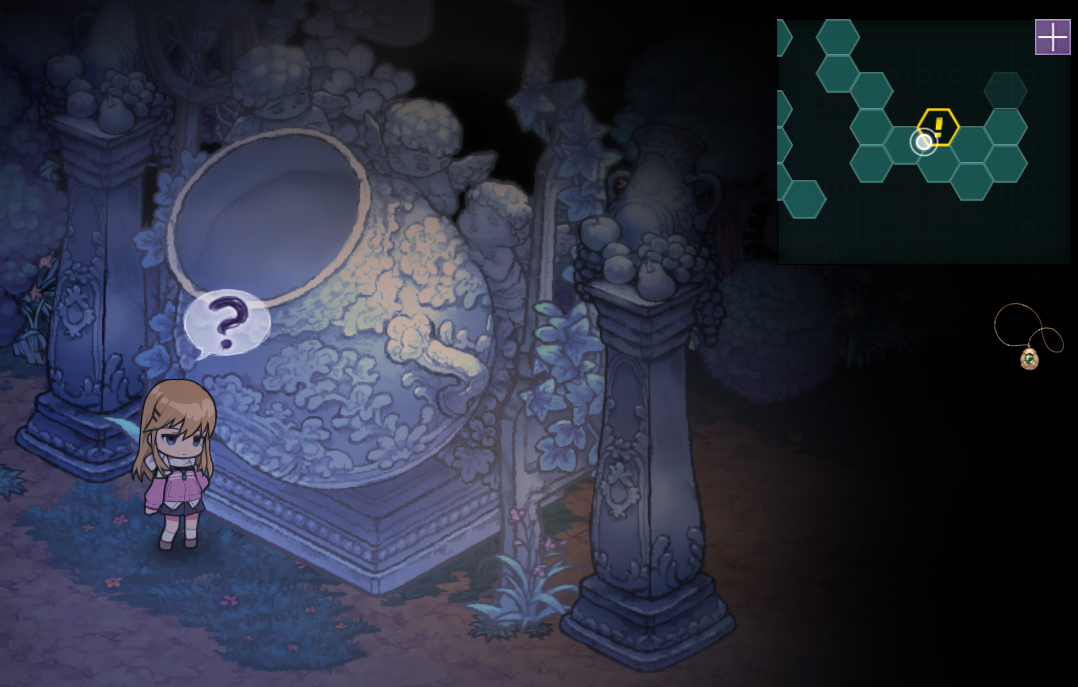 Get a random scroll/book/gear or heal every ~2 inputs. I typically put in tablets, useless scrolls (ie transfer), and skill books if I don’t expect a library to show up. TBH I usually skip the Jar…
Using the Golden Apple will give you a random relic. 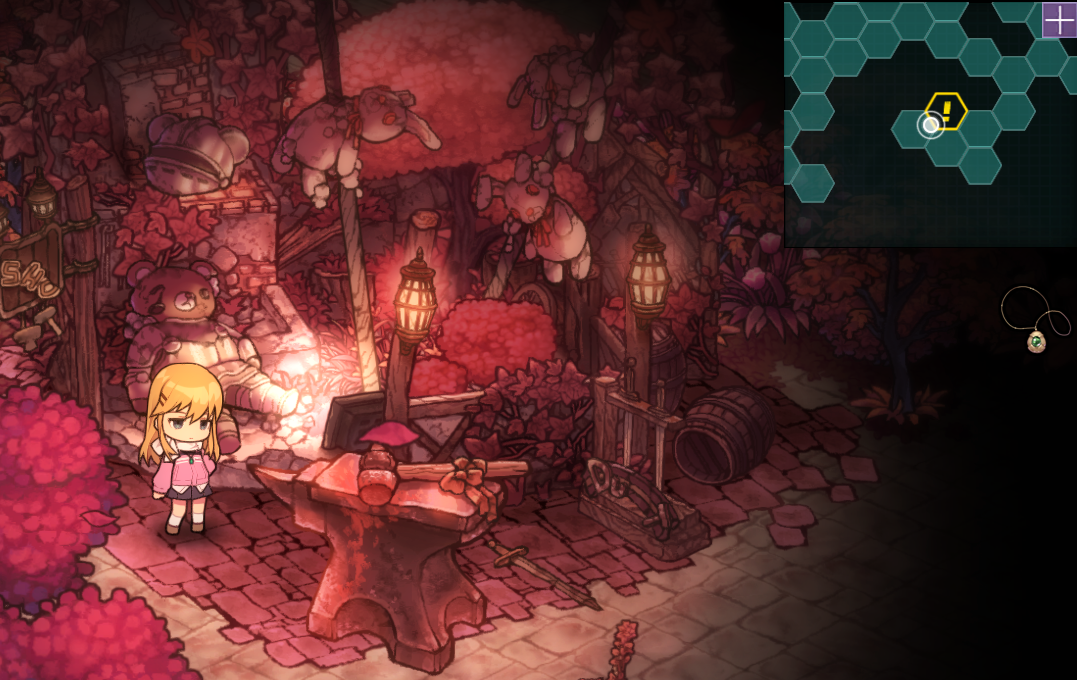 Combining 2 orange/legendary gears gives you 1 orange/legendary, so don’t do it
Golden apple can be used in place of a purple/epic gear
Try to get as many purple/orange gear due to their unique effects
Try not to pay for re-rolls… it’s easier to save gold for keys and gear pieces in the future. Just hope you get a forge again in a later stage…
If you somehow have the money though, save the 50% price for a legendary gear re-roll. 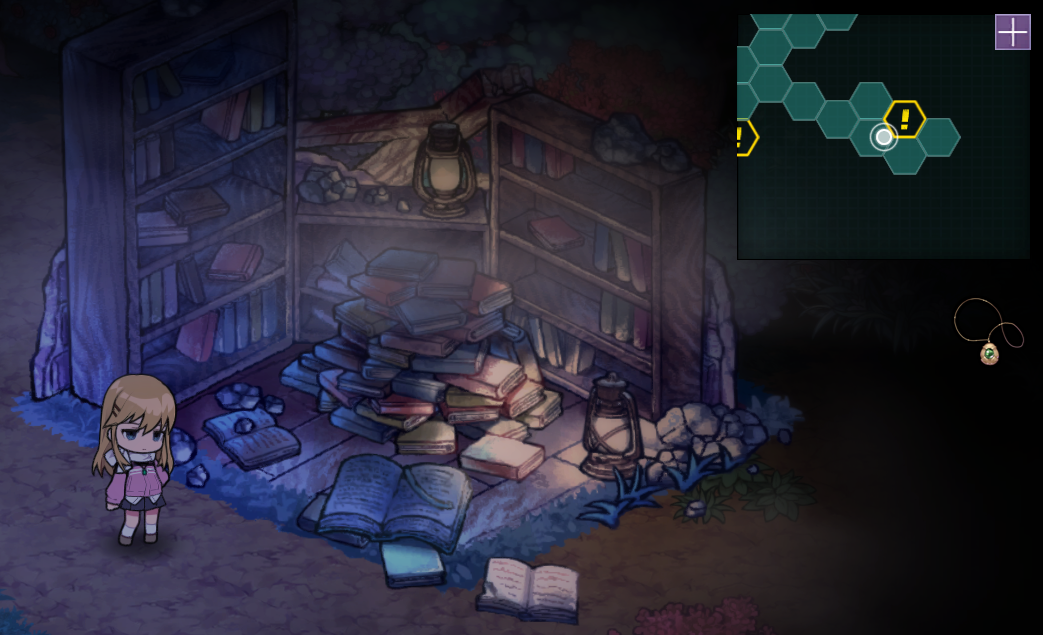 I avoid upgrading gear due to better uses for gold. Good for re-rolling Lucy skills or for turning books into scrolls. Best place to get mapping and purification scrolls.
Golden Apple gives a black skill book and Lucy skill book.

Process for maps and campsites: 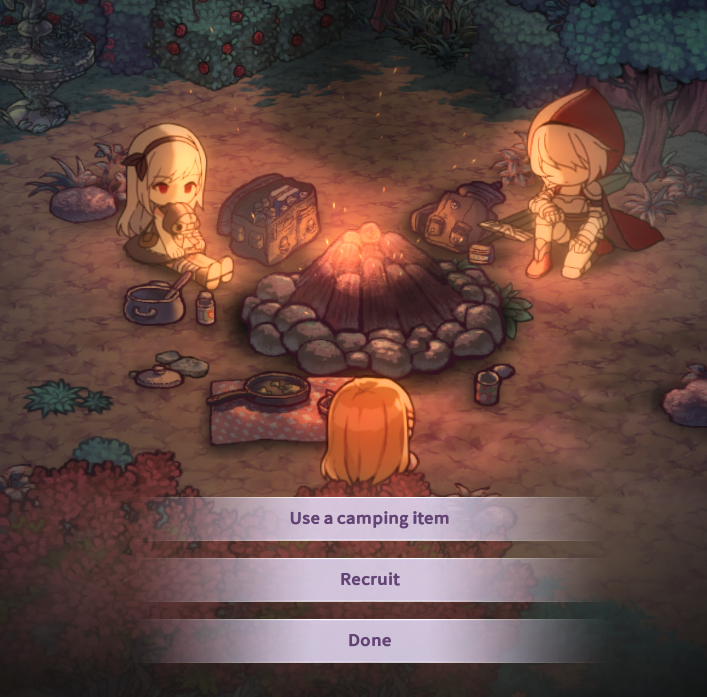 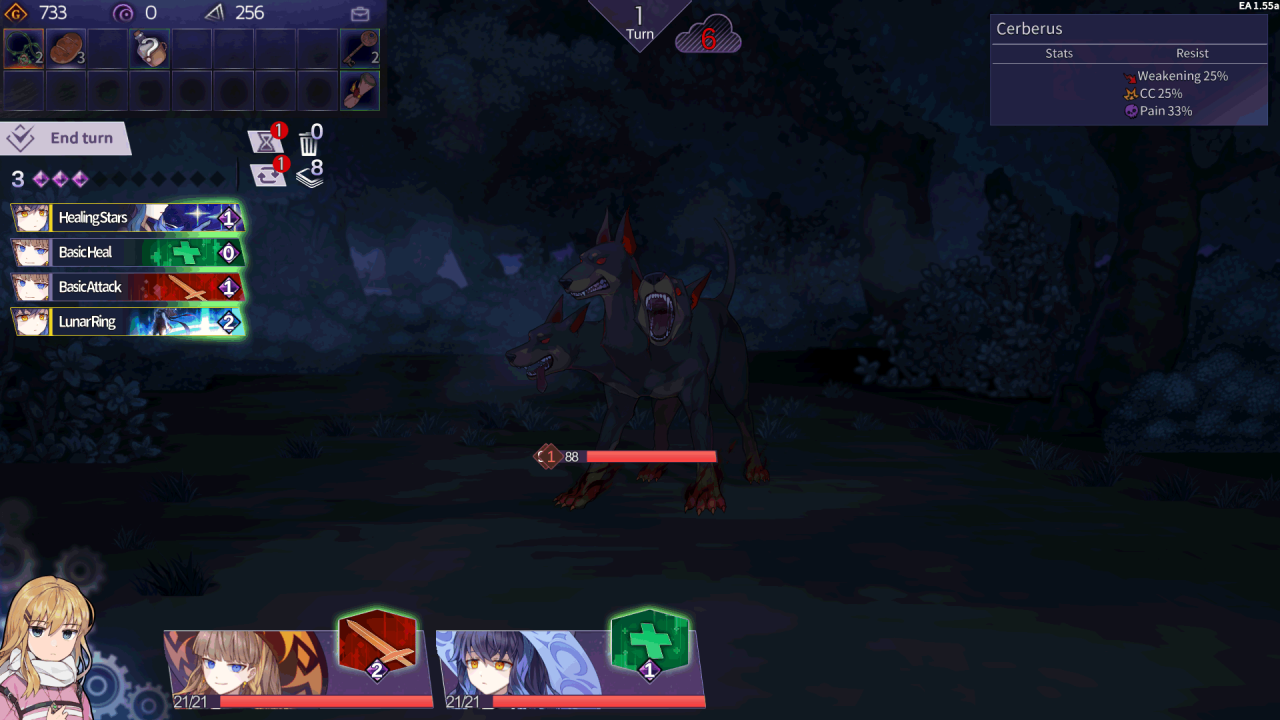 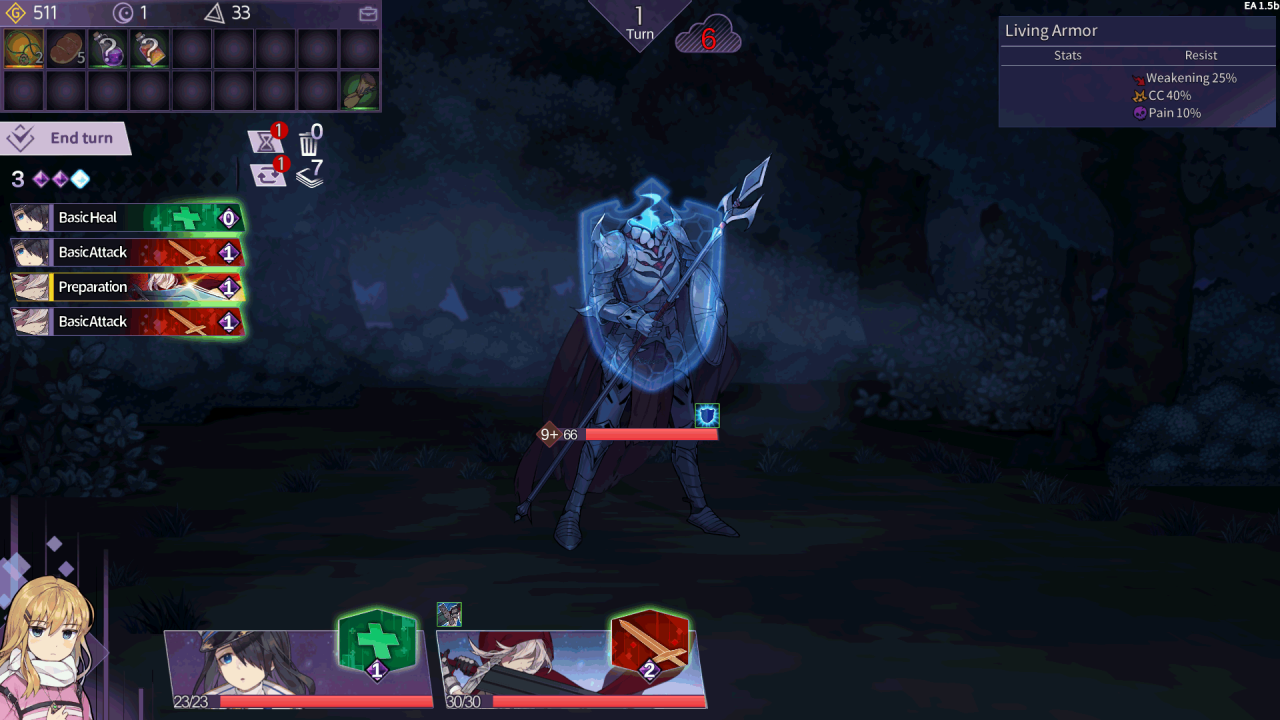 Uses a shield that lowers first dmg to 1

1. Fountain of Oblivion – Replace Acceleration with another Lucy Skill 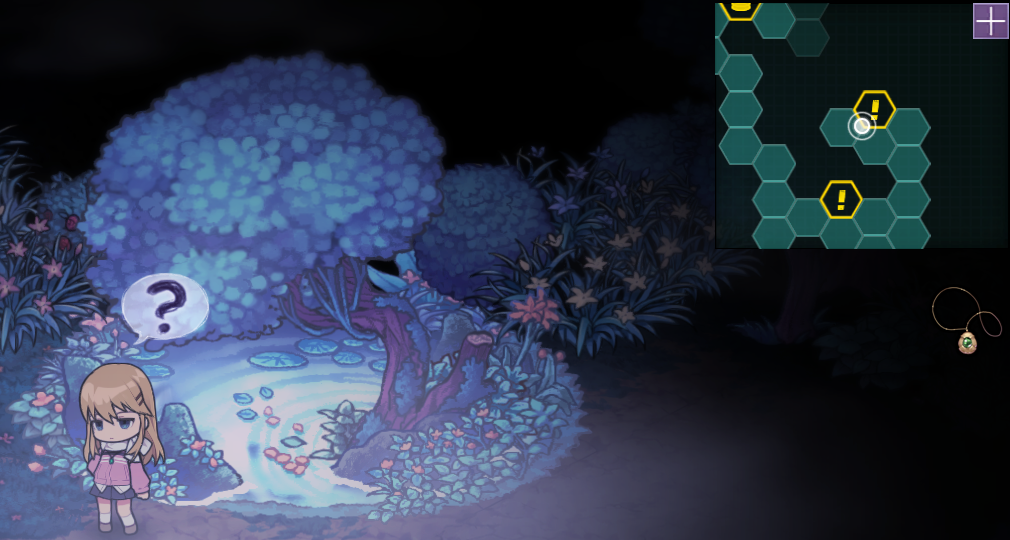 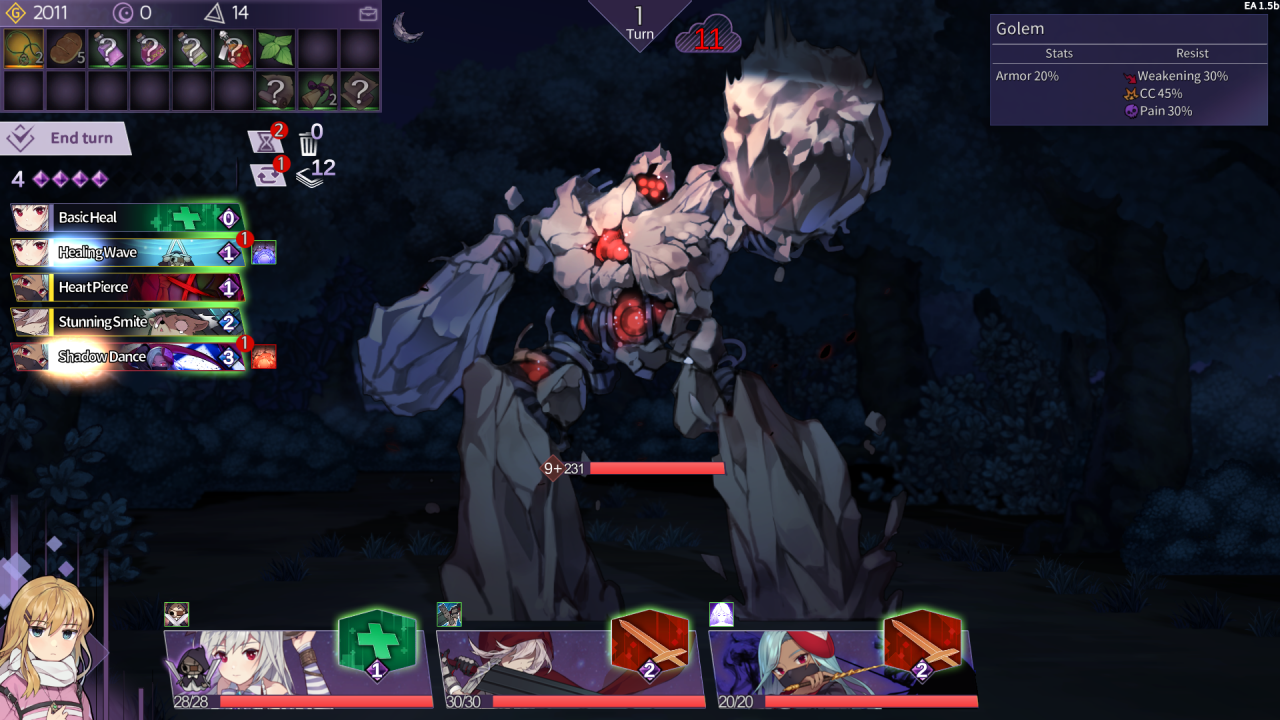 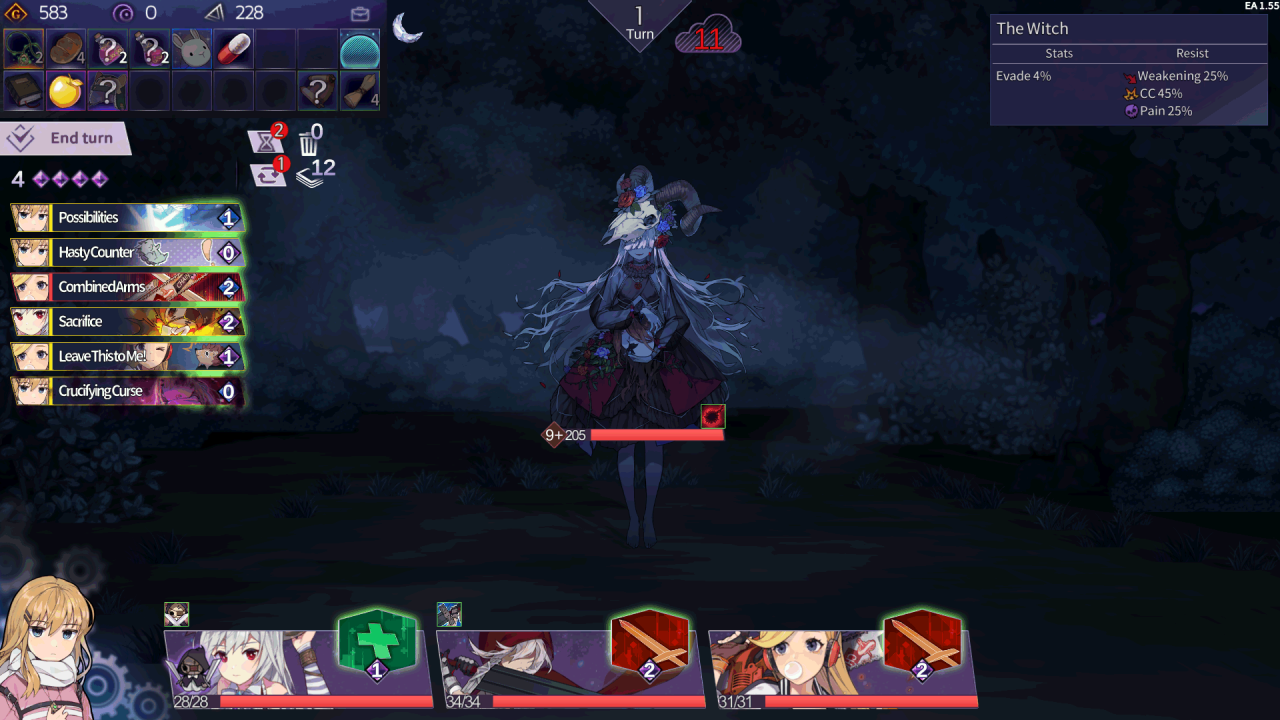 Summons a butler (+taunt) and maid (can cause bleed) if not in battle; heals/buffs one if they’re present
Creates a pain curse (5dmg/turn for 4 turns) or weakening curse (Atk/Heal -10%) you must apply to an ally each turn 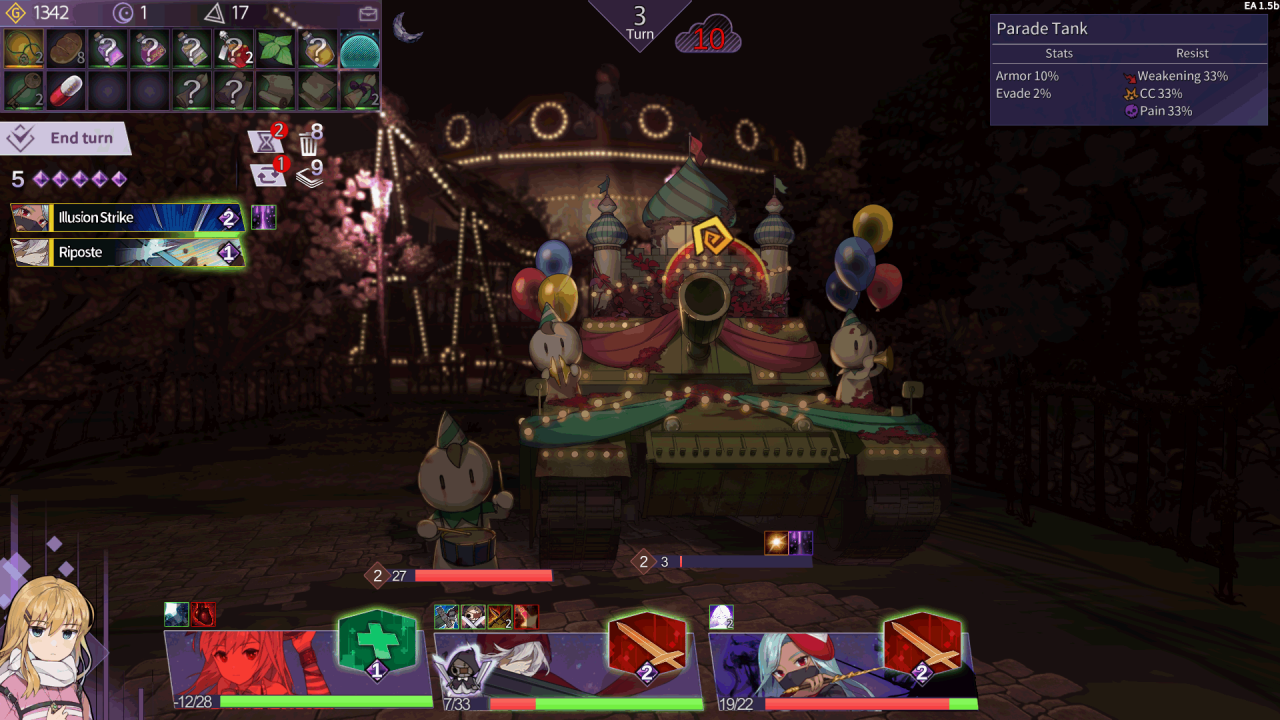 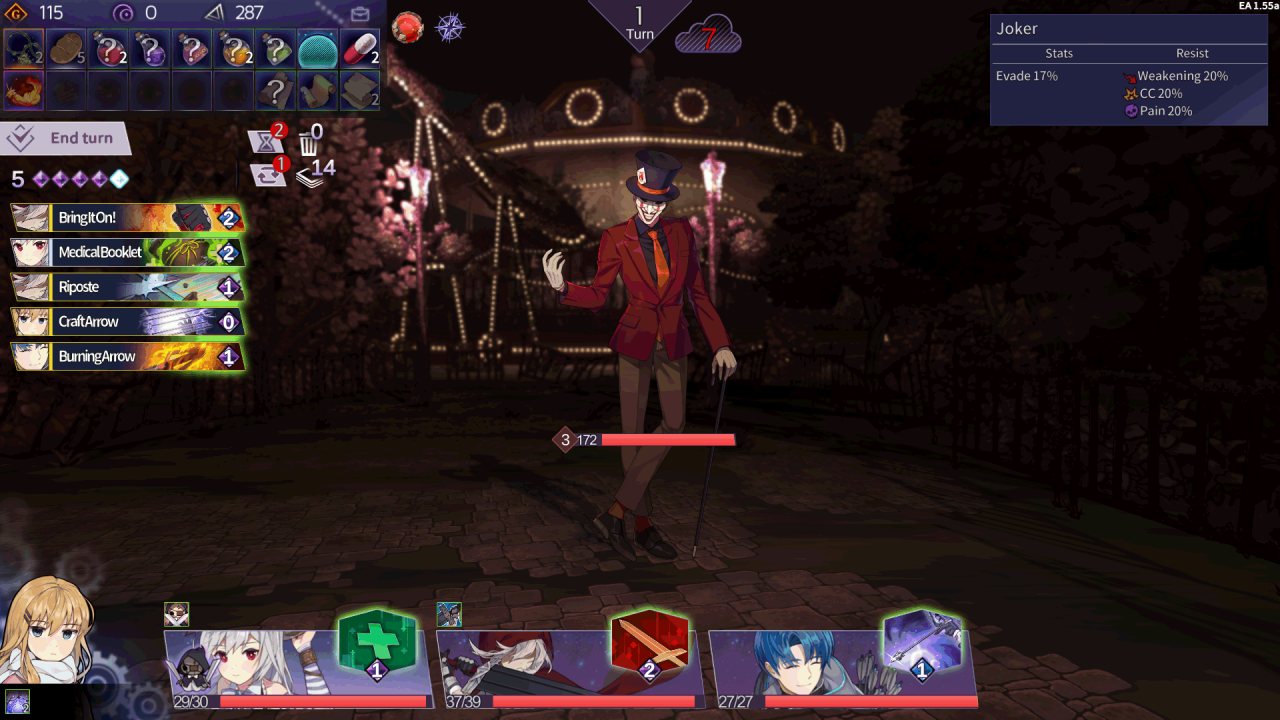 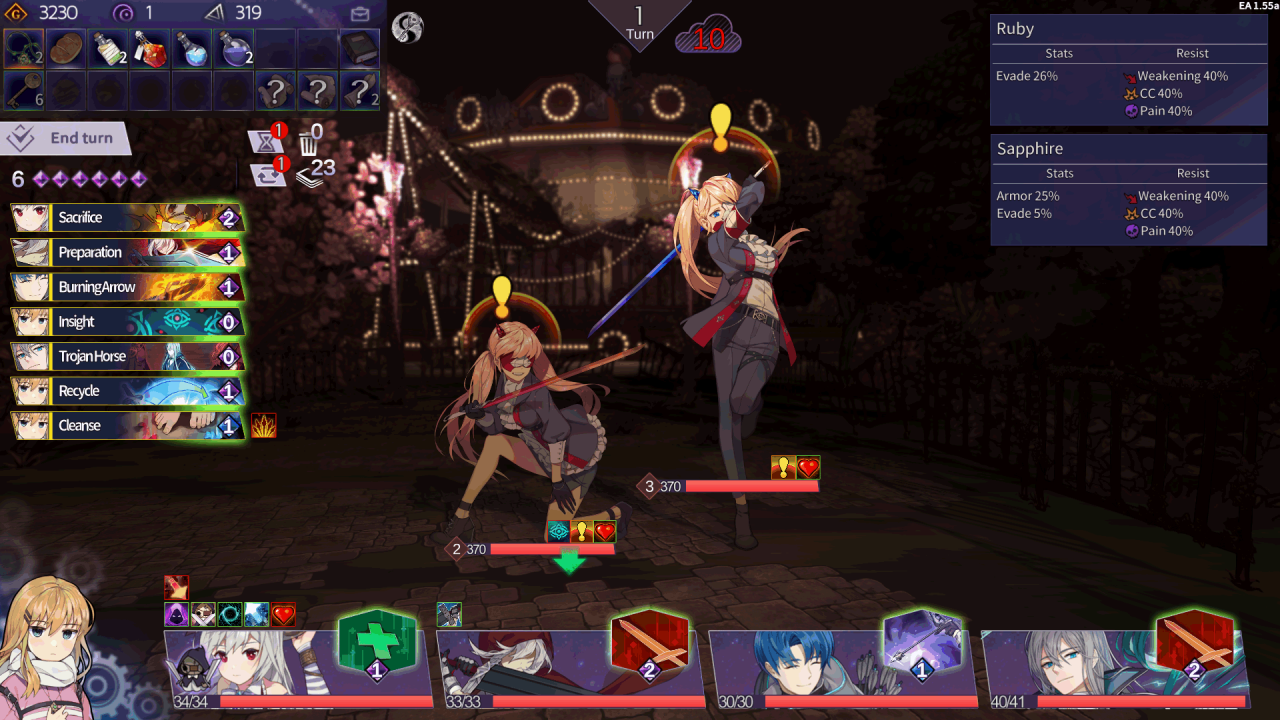 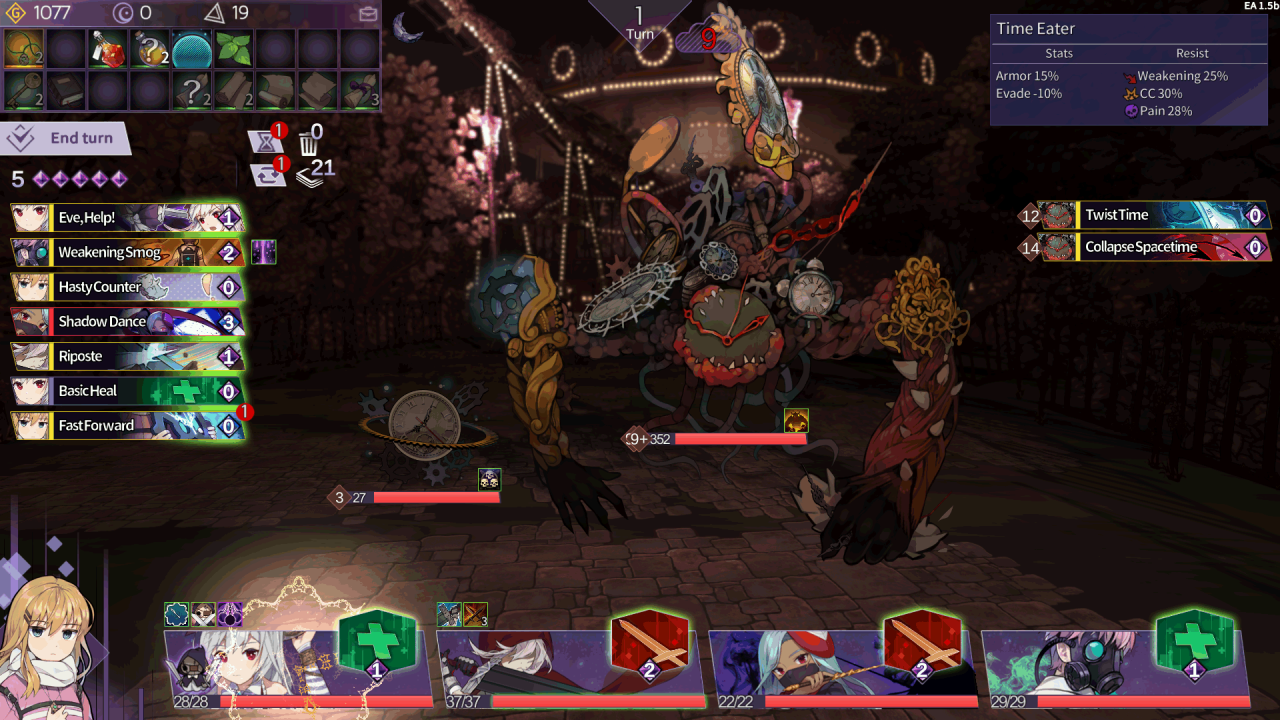 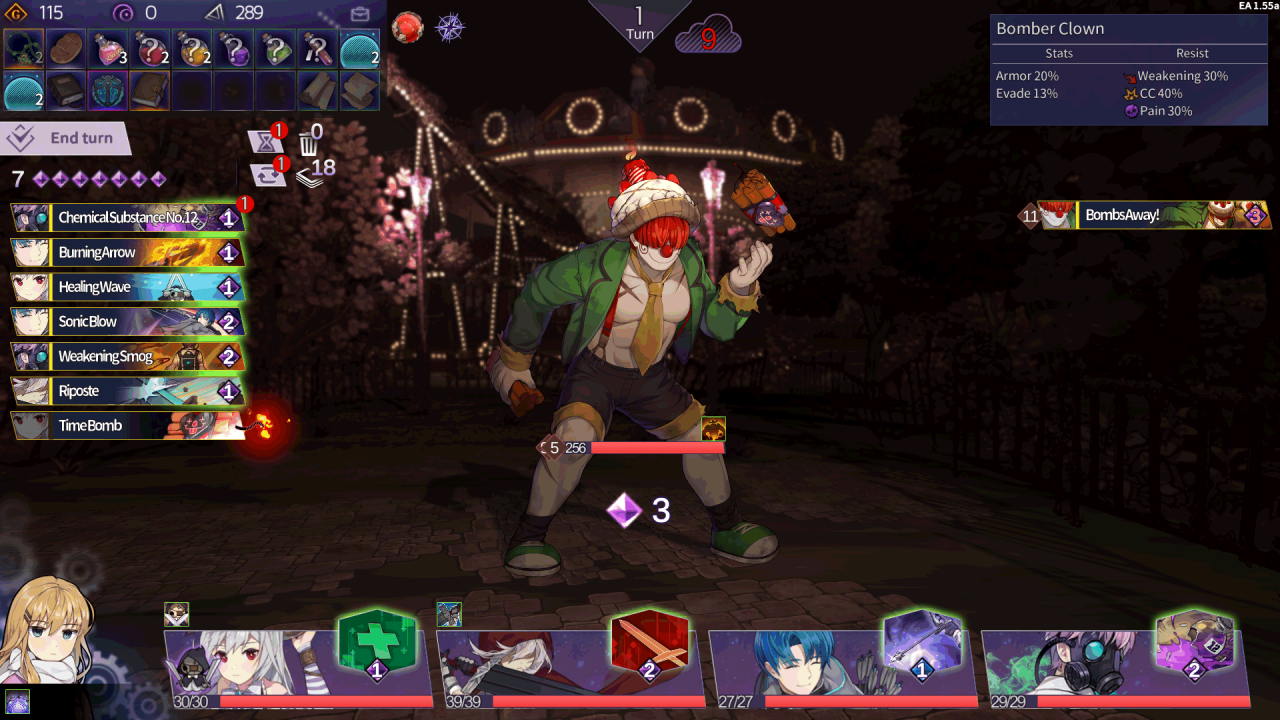 Adds bombs to hand
Top skill is discarded at end of turn if not used
If bomb reaches top of hand, random ally receives 15 dmg
Inflicts dmg based on number of skills in hand with a certain mana cost 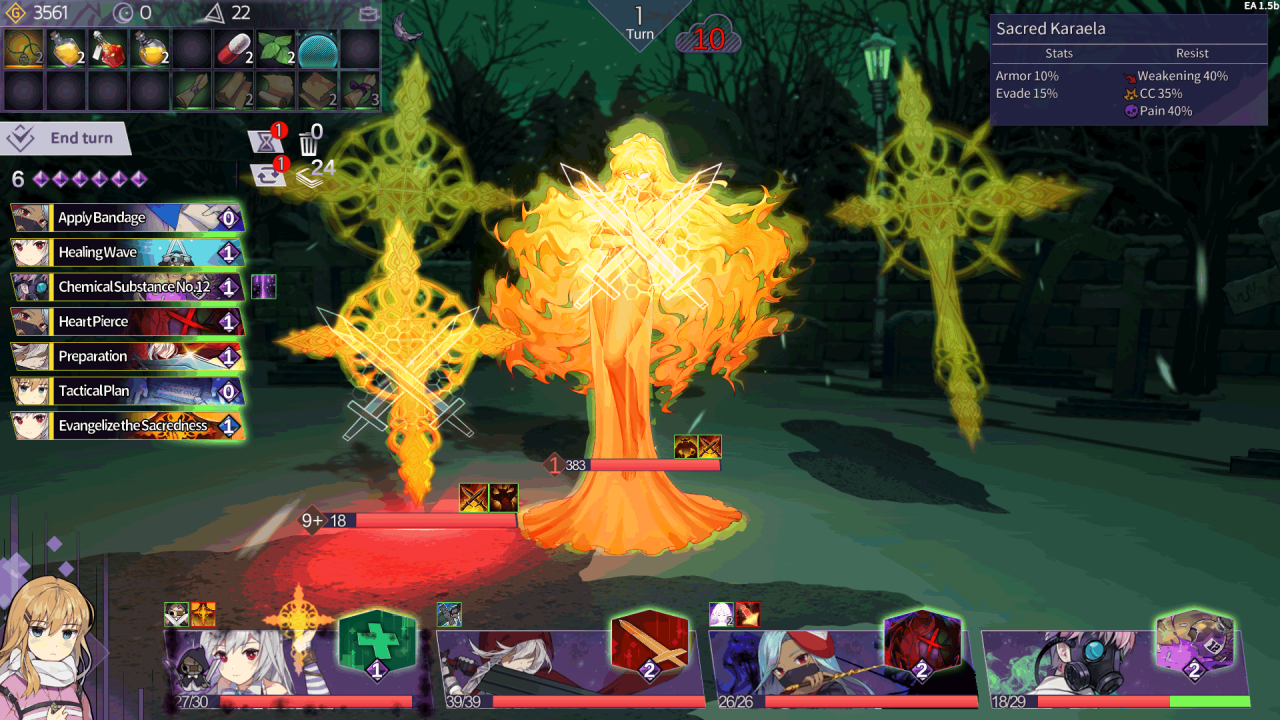 One ally receives a debuff causing -100% heal received
Can be passed to another ally, and allows that next ally skill to be repeated by previous ally
Summons a burning cross each turn
Burning cross and boss have counter buffs which deal more dmg to allies without the heal debuff 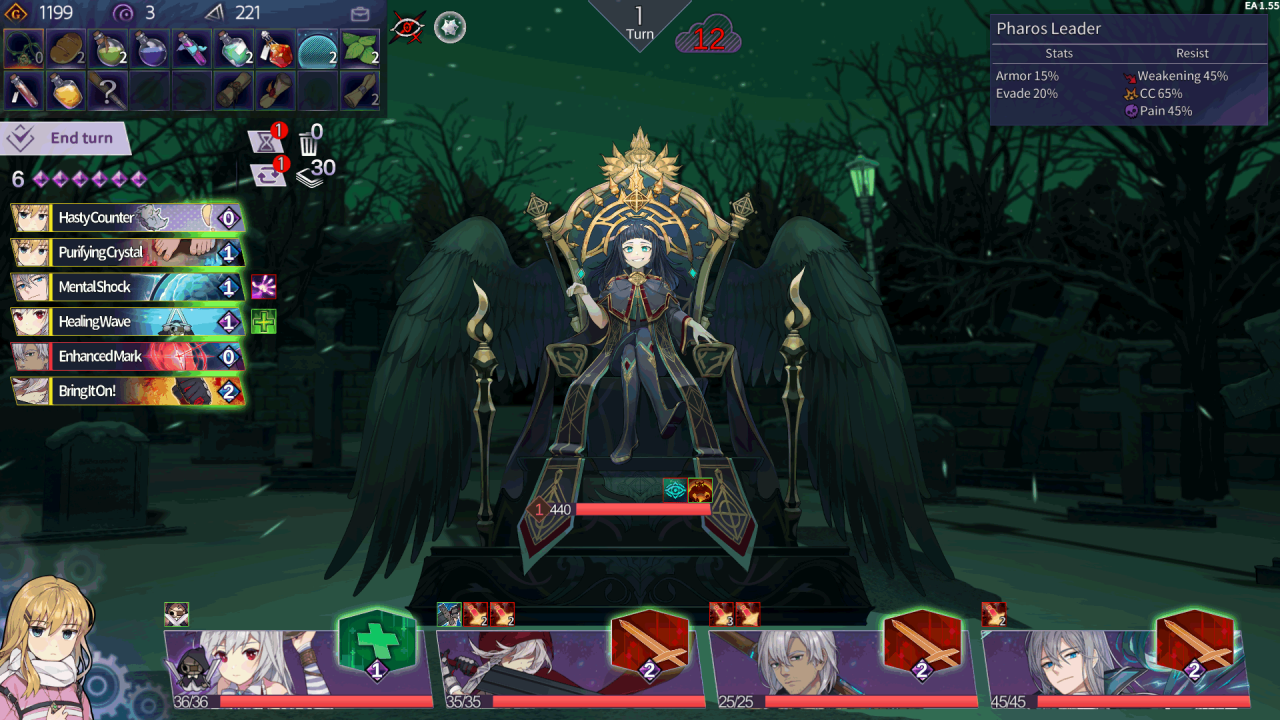 One dmg skill must be inflicted on an ally each turn before usable on boss
When HP ~50%, inflicts mind control debuff causing the ally’s skill to be unusable
Controlled ally casts a skill on other allies unless damaged 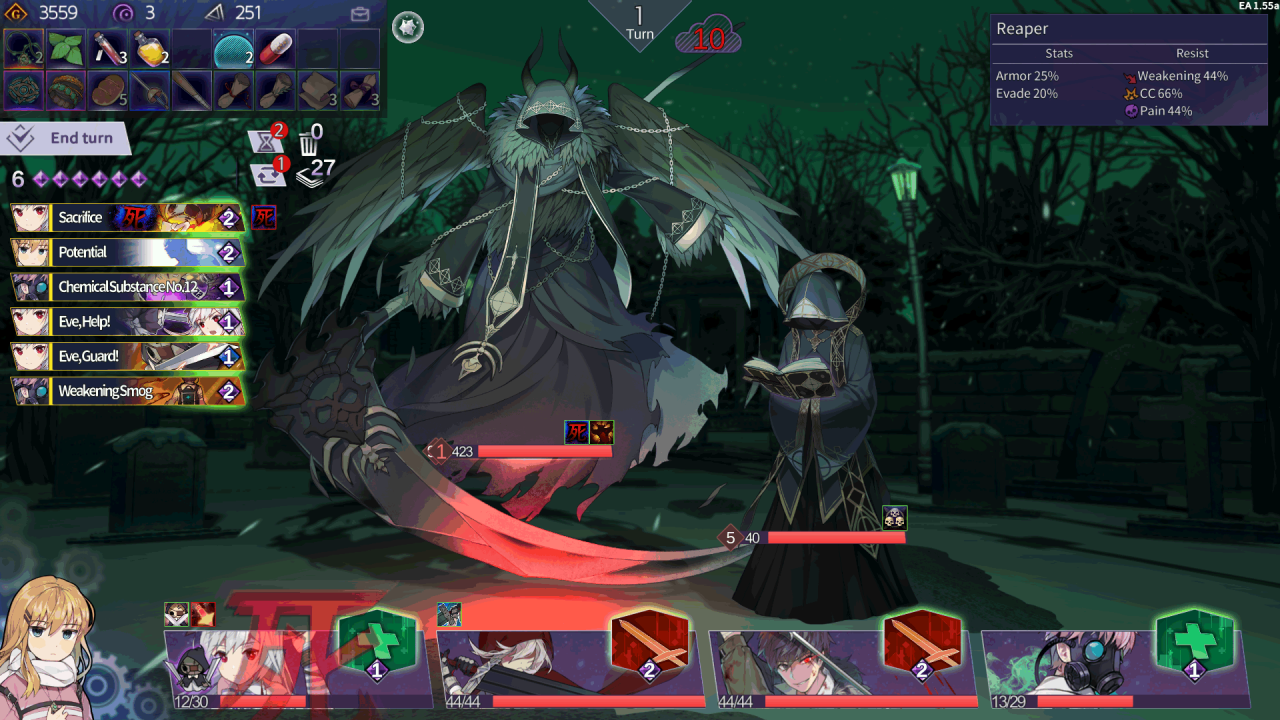 Inflicts a 3-turn debuff on the ally with the skill at the top of hand
If debuff is stacked to 2, all allies receive strong AOE pain dmg
Summons a Pharos High Priest if not present; if present, receives dmg buff

Map is split into 3 parts with a 1:2:2 event placement. The first location is unguarded; always use it. The next section has 2 locations guarded by 1 enemy. Only one location can be used. The third section is the same as the first and contains the merchant. 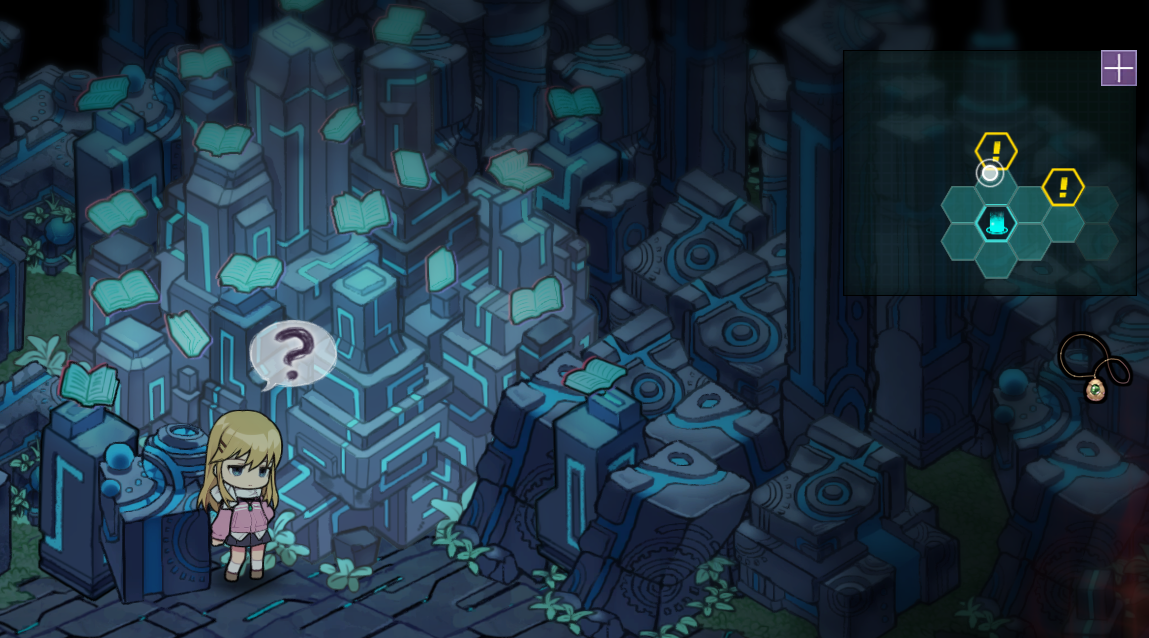 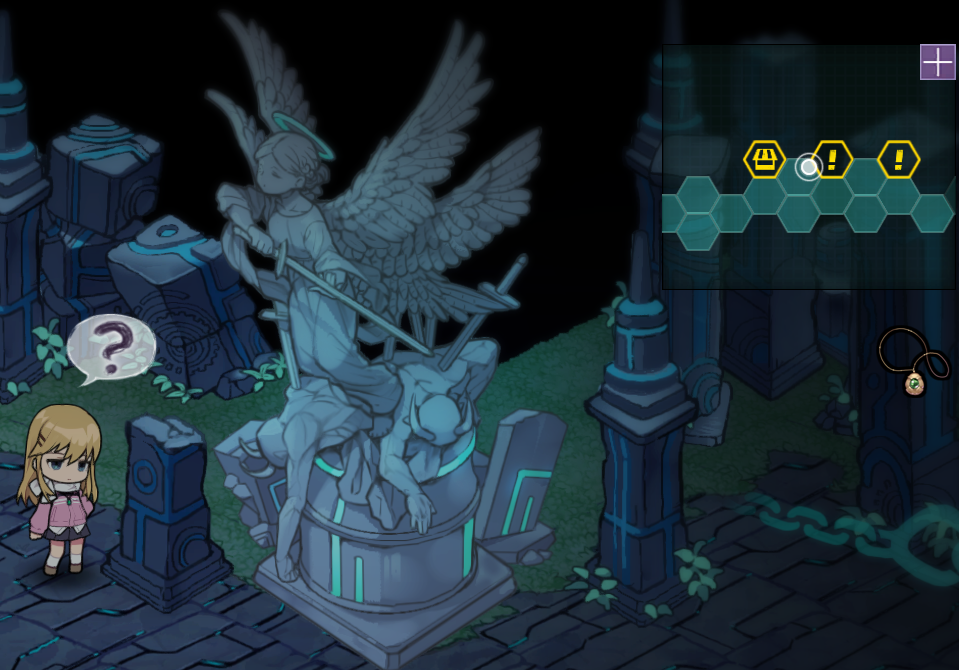 Forget 1 skill. Pick a skill for that character to learn. Options are skills learnable by any teammate. 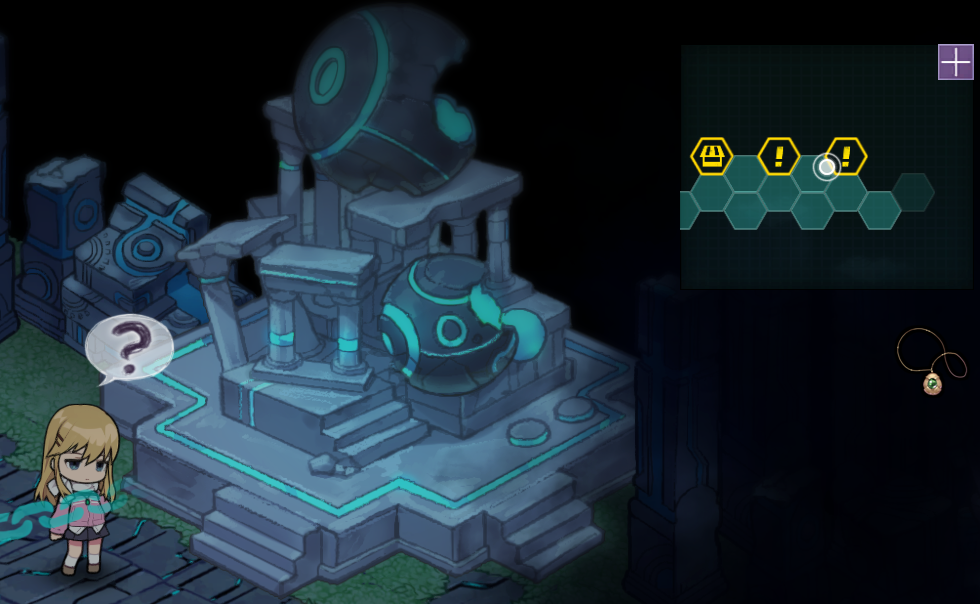 Choose 1 gear to be in inventory on next run. Only works if you fail the current run (or forfeit)… 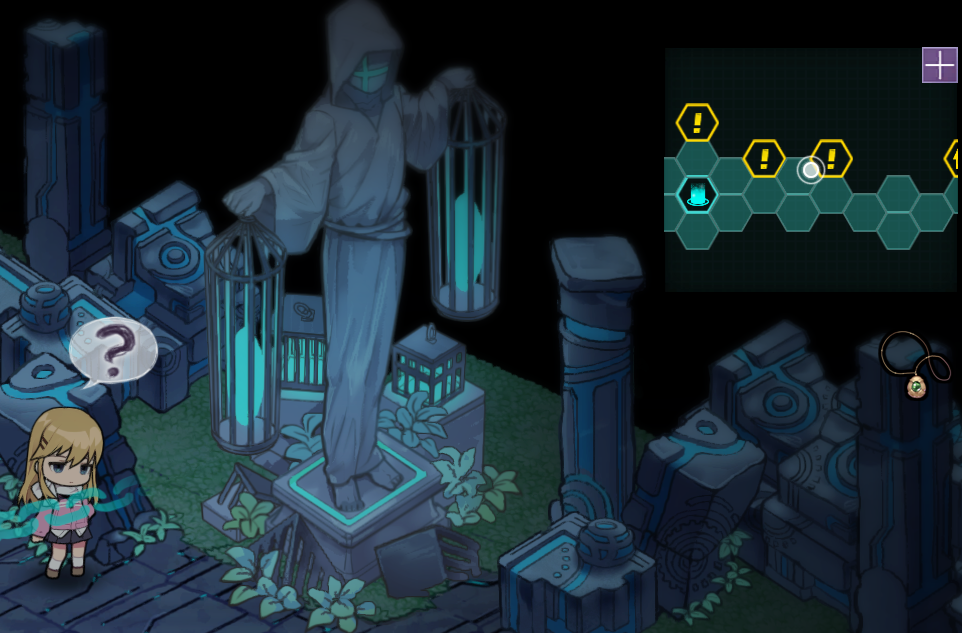 Pick 1 of 3 relics. Able to open relic display at any time. 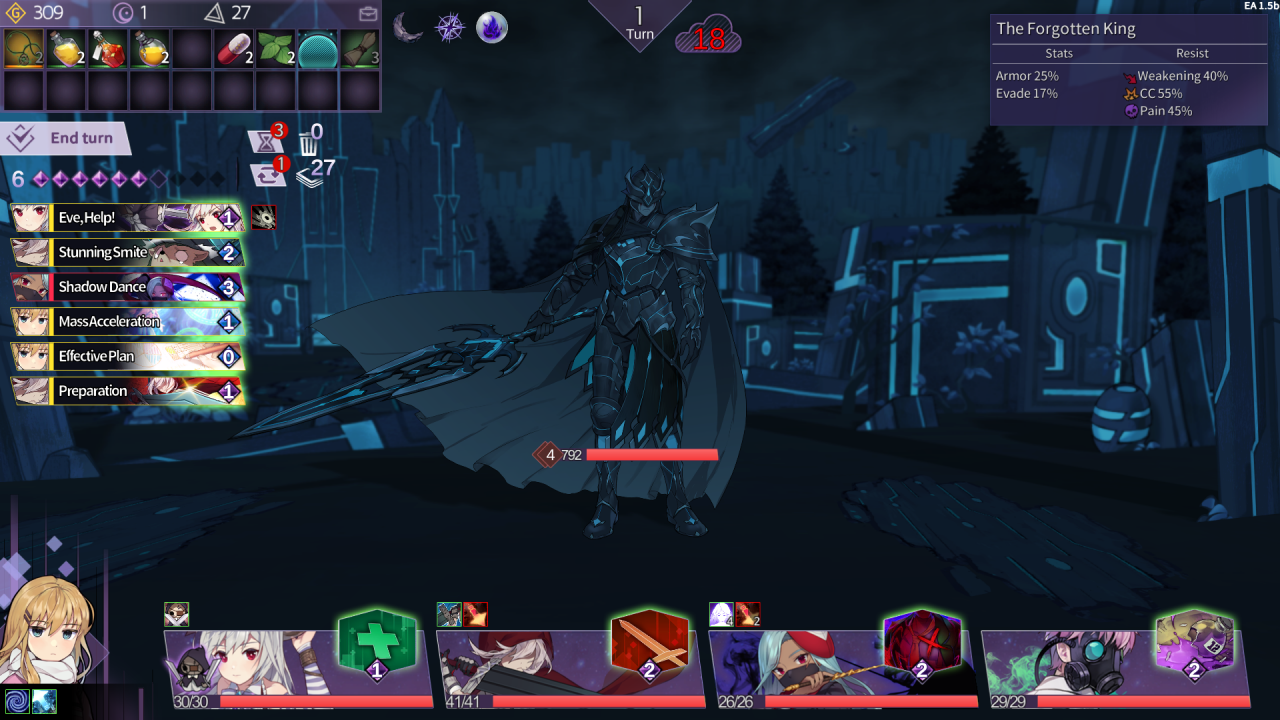 Phase 1:
Boss receives buff if certain skill is used
Can shackle an ally making their skills unplayable until a crystal is destroyed
Ally dies in 3 turns if not unshackled

Phase 2:
HP ~50%
Boss is shielded; dmg = 0
Summons 3 crystals; once destroyed, discards all skills of the ally who destroyed it
Create 2 Purifying Lightning skills each turn causing 40% dmg that scales if repeated on an ally

Phase 3:
Bleeding skills are used more often
Must choose 1 of 2 skills to exclude from deck (2 times/turn)
Fixed skills can are debuffed with once

nb. Phase 1 -> 2 is dangerous since boss attacks twice the turn it shields then uses a strong AOE the start of the next turn. This majorly depletes healing gauges and can even faint an ally at full health.

Lian basically absorbs damage. Her natural Armor stats are high, especially with Grand Reflex. Since she covers for other teammates with parry and can preemptively attack with Preparation, playing without her on the team makes a run so much more difficult.

Sizz is probably the most reliable AOE healer. Enemy AOEs typically don’t hit all characters so the incomplete AOE of Healing Wave is bearable especially due to its high Heal:Mana ratio and debuff removal.

Sacrifice makes Eve unusable, but a healing skill the next turn will bring her back. AOE dmg and a party barrier makes sacrifice useful.

Lol, apparently most people choose Joey as a healer. However, use him as a dps and at 5 stacks of intoxication he can do like 40 dmg/turn. Against bosses and annoying enemies like the wooden carousel horses, he works a lot better than other DPS characters. Also the best character to give the Rod of Faith ( +6/-3 ATK/Heal stats based on class)

When at a loss for the best 4th team member I just typically choose Narhan. Other characters typically take the ATK, Heal, and Armor items, so at least he can make use of HP items they don’t use. Mental Shock is decent DPS, and Cold Hearted practically nulls a strong AOE attack by bosses; even better, it’s only one-use, which allows DPS skills and Heal skills to be drawn more often. At high HP, The Mentalist can give like 30 barrier for 2 turns.

Miss Chain – Decent Skill Effects and Pain Debuffs. Burn effects are useful, but you have to use a skill to access them. Decent DPS, but kind of lacking as a tank.
Leave This To Me > Engine Burner > Combined Arms > Zoom > Engine Reload > anything else

Johan – Decent DPS and Burning Arrow. Good in beginning, but weak in end-game.
Burning Arrow > HookShot > Rain of Arrows > Sonic Blow > anything else

Helia&Selena – Decent DPS and Heal. Unfortunately they come as a pair and lunar curtain/solar flare effects can be difficult to coordinate. Seleneurion is a “1-cost” swift skill that deals 65 dmg (if you can even manage to get 2 specific rare skills in a single run).
Combustion > Sun Ring > Prominence = Black Sun = SolarBolt > anything else
Star Breeze > Lunar Ring > Healing Stars = Power of Full Moon > anything else

Silverstein – Never really tried to use him due to his high mana costs.

Huzz – I don’t even know how to use her. I feel like she’d just get my whole party killed off…

Phoenix – In a game where RNG matters, I don’t need a mildly useful character that can fail if I don’t have enough bread…

Knowing how to find the hidden chest gives you a HUGE advantage for getting good gear for the run. Unfortunately, it’s not easy to find and you can easily spend 4 lifting scrolls and still not reveal it…

However, here are some tips that help tons.

1. Look for areas surrounded by tiles
2. Look for paths blocked by enemies but can be passed if a hidden block shows up
3. 1 Hidden Chest per stage except for Misty Garden 1 and Final Stage 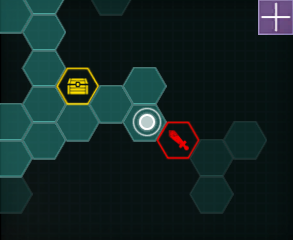 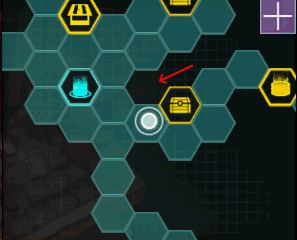 – Tile is surrounded on all sides 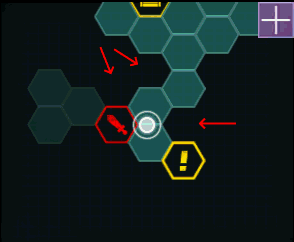 Throw a brick if the chest isn’t here 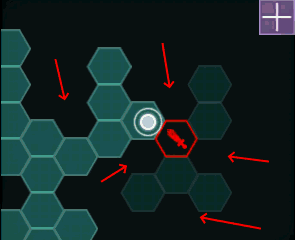 To reveal the chest use either a lifting scroll or purification scroll next to the tile. Thankfully it works from about 2-3 tiles away, so if there are multiple tiles in an area, use the scroll in the middleground.

If you don’t have those scrolls, teleport scrolls have a rare chance of teleporting you to the tile too. I feel like they have a better chance if you are right next to the hidden tile, but who knows…

Other Tips
1. Transformation Potion
– A rare potion that randomizes an ally’s gear
– Save it for re-rolling Legendary gear

4. Oblivion Potion
– Use on an enemy to stun

5. Credits
– You get about 20 credits for completing a run on casual