To beat the game for 100%, you have to complete all Monster Hunt missions in order to open all necessary leaders.

While the game doesn’t have any kind of story mode, this guide might contain spoilers still, so if you want just to enjoy the game first, go on, and leave this page for a while 🙂

Btw, sorry for any mistakes, english is not my native language.

While first three achievements are quiet easy to get for any unexperienced player, the two remaining are really rough. I tried many options, but got achievement with this one, which still requires some fast build/development skill and a bit of luck: 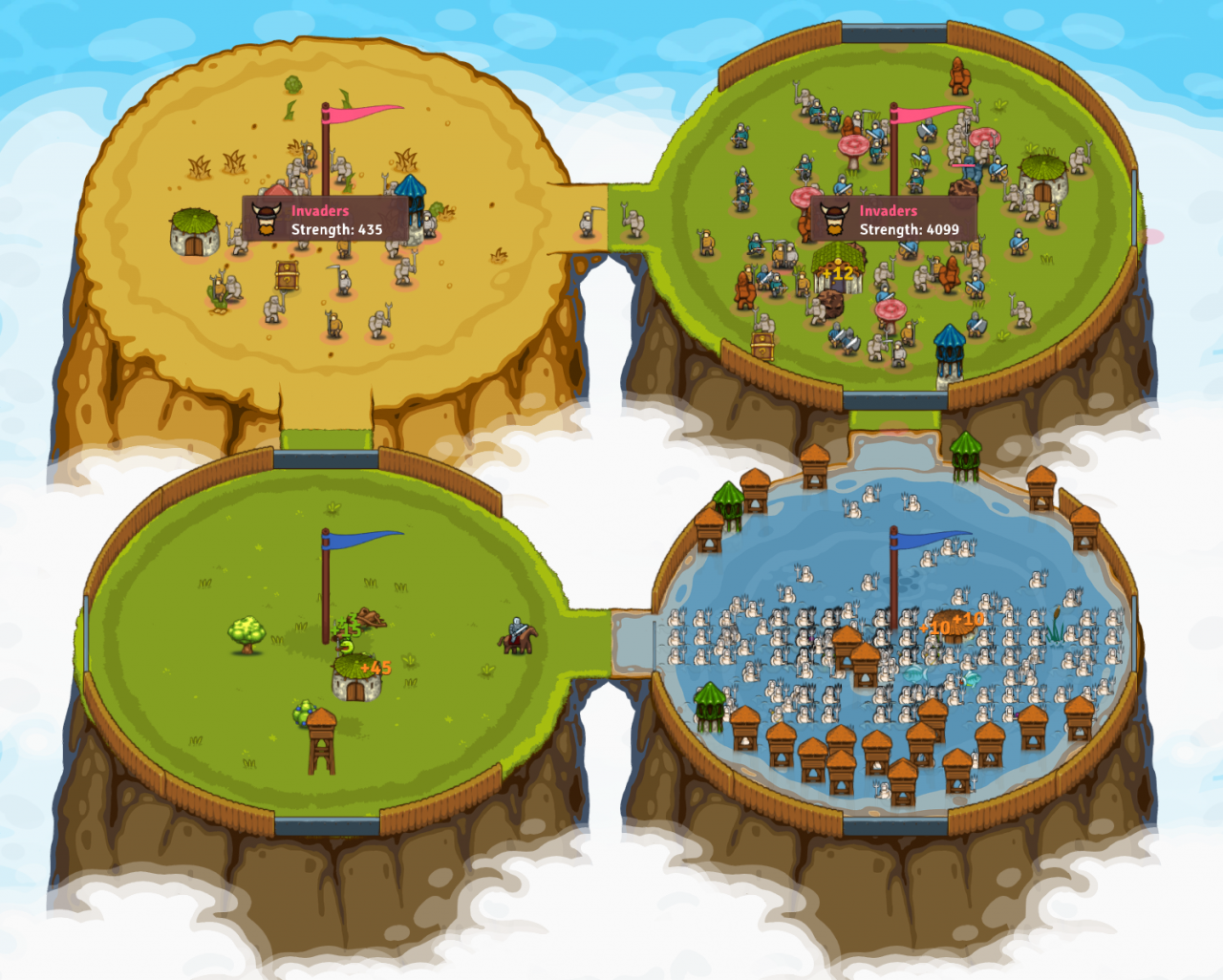 These ones aren’t that bad as Imperial Conflict, but the last one is still tricky a bit. I can only advice here not to play on very big map size. The higher the difficulty, the more simultaneous attacks you will get. Might be annoying a bit, but sometimes there’s no reason to react them all: mostly I just left five workers on island and made my army go further. In this mode I don’t use towers at all: better to waste resources on army upgrade or for better units and then just wipe all the enemies from map.

The first three or two you will get while Monster Hunt completion, without any special moves. As for remaining ones, while playing on 7×7 map, just leave one island untouched and keep mining resources. Build banks on every of 48 islands (toxic island won’t harm the bank), and keep waiting. Check if all you workers are busy mining gold if there any on island 🙂

No need to set very high difficulty, but such as Normal or even Experienced might be boring sometimes. Find you comfortable one.

As for the bosses, just kick their asses one by one, nothing more, nothing else. No need to wipe all the islands, once you’ll kill the boss, the mission will complete. They won’t have some special stuff at all, and usually behave as just bigger versions of other mobs associated with them. You’ll recognize boss by skull icon above his head.

The game will count all the battles you won or lost into some global stats, these achievements are made for such progress.

The first three you’l easily get while Monster Hunt completion or maybe a bit later.

For the last one, start 7×7 map, wipe all the island except one. Manage some resources, buy more armies, towers, check if all the workers busy (build pumpkins for islands which ran out of resources). When all done and you feel satisfied, go save the game and wipe last island. Then complete level, load again and win again and… so on. 60-80k of total score will be enough to get this achievement fast.

Easily got while Monster Hunt Completion.

I don’t remember if you’ll have this achievement once you buy the healer or once you’ll unlock him. Anyway, this will happen really soon, as this is the first popular achievement made by everyone.

Vampiric Tendencies
Have a vampire in your army

Not that hard, you’ll be able to buy him once you’ll unlock Camp. Camp is unlocked when one on your workers will get higher level, no chance to miss it.

Two options: when you’ll conquer new island which have pumpkins, just don’t spawn workers and wait till it’s grow to maxlevel. Or you might spam a lot of them on one of you islands, workers won’t have time to collect them all, and one will grow eventually.

Elite Force Strategy
Have 10 or more knights in your army

Self-explanatory, mkay? While playing on 7×7 islands you’ll have much more, no way to miss.

Dragon Tamer
Own your first dragon

No way to miss it.

Spam a lot of them before winning the game or play bigger maps.

The cheapest guys in blue costumes, but they are quiet effective on very first encounters. Gather bigger army of them and rush couple of easy islands, not that difficult.

Spam them before completing any 7×7 game.

Wizard War Council
Have 3 or more wizards in your army

Healer Community
Have 10 or more healers in your army

Rainbow Guard
Construct 4 types of towers in one circle

Maximum Size Haunted Pumpkin
Get a maximum size haunted pumpkin. Can only be unlocked during the spoooookiest time of the year.

No need to wait for October, the developers released patch recently. Once you’ll find an island populated with funny pumpkin guys, there will be couple of scary pumpkins. Conquer the island, but don’t harvest the pumpkins while they are not max-leveled.

Necromancer Pact
Have 3 or more necromancers in your army

Goblin Hero
Have a max level goblin in your army

Same tactic as for Military Career.

Standardised Warfare
Have 100 or more swordsmen in your army

Spam em before winning the match.

Vampire Lord
Have a level 4 vampire in your army

Vampire King
Have a level 5 vampire in your army

Legendary Vampire
Have a level 6 vampire in your army

Pick any Leader you’re comfortable with and who have ability to spawn Vampires, no matter with Camps only or not. Start 7×7 map, get some beginner mixed army, then keep to buying only Vampires. Got this achievement while crushing islands with 30-40 Vampires in total, one of them eventually will get the highest level.

Undead Army
Have 100 or more zombies in your army

There are few Leaders who can spawn them for food, such as Xee and Xess. You might spam em before the game ends, or whatever. Don’t know if using Necromancer counts.

Be a better brick
Research “Masonry” upgrade from the upgrades menu

Once you’ll get it on some bigger maps.

Killing in the name of..! There are rare islands with 2 or more catapults, cannot be missed during whole game, I think.

You’ll need to buy each upgrade from the second page like for 4 or 5 times, I didn’t count 😉

Ghost Army
Have 20 ghosts or frost ghosts in your army

Goblin Army
Have 100 or more goblins in your army

Pretend yourself as The Night King.

Start the Monster Hunt game against Ne-Morg the Master Necromancer. If you’ll see any tower with pink roof, don’t destroy it, only kill some necromancers and runaway. Repeat N times, profit.

Build em, shoot em, that’s all. Not sure, maybe you’ll need enemies nearby.

On some big map, build three banks in the beggining. Banks will get level as they will produce enough gold. You can see the progress by holding left mouse button on the bank or just clicking on it.

Dragon slayer
Kill 3 enemy dragons in one game (any level)

You’ll get em closer to the end of Monster Hunt missions.

Use Wyone the Water Queen as Leader, go on.

Pumpkin Darklord
Spawn 10 pumpkin necromancers
Use Puck the Pumpkin King as Leader, spawn them. I don’t remember how to unlock him, maybe just by completing Monster Hunt, hope someone knows better.

Pumpkinmancy
Spawn 10 pumpkin-men. Quiet tricky, but simple. Once you spawned ten pumpkin necromancers, build a pumpkin close to them. That’s all! They’ll turn a pumpkin into ally, repeat ten times.

You’ll get by killing pre-last boss from Monster Hunt missions. If not, you can send low-level meat to any evil dragon on the map, make him uprank and than crush him with real army.

Almost same as Death Rights Protector achievement. But this time, try to find towers with skulls and stuff, which means they are more-leveled. They will spawn Vampires sometimes. Don’t destory towers, only kill Vampires, run away, repeat. Might be tough, make sure you have enough army.

Start 7×7 map, build many banks from the beginning, you’ll need many gold in the end. Spam em before finishing the level.

Use Wyone the Water Queen as Leader, go on.

Pick Swifty the Scavenger Lord as Leader, use tactics from Military Career achievement.