This is the guide you should read if you’re trying to understand how my work-in-progress TF2-inspired map works. And because it is a work-in-progress, things in this guide will likely change up to the map’s completion.

Cobalt 2fort is essentially capture the plug made to function like a game of TF2 capture the flag. The goal is to capture the enemy’s “intelligence” by taking it from their base (identical to yours). And like TF2, there are classes and ammunition is limited. But, since it is being made in Cobalt, there are quite a few things that work differently. 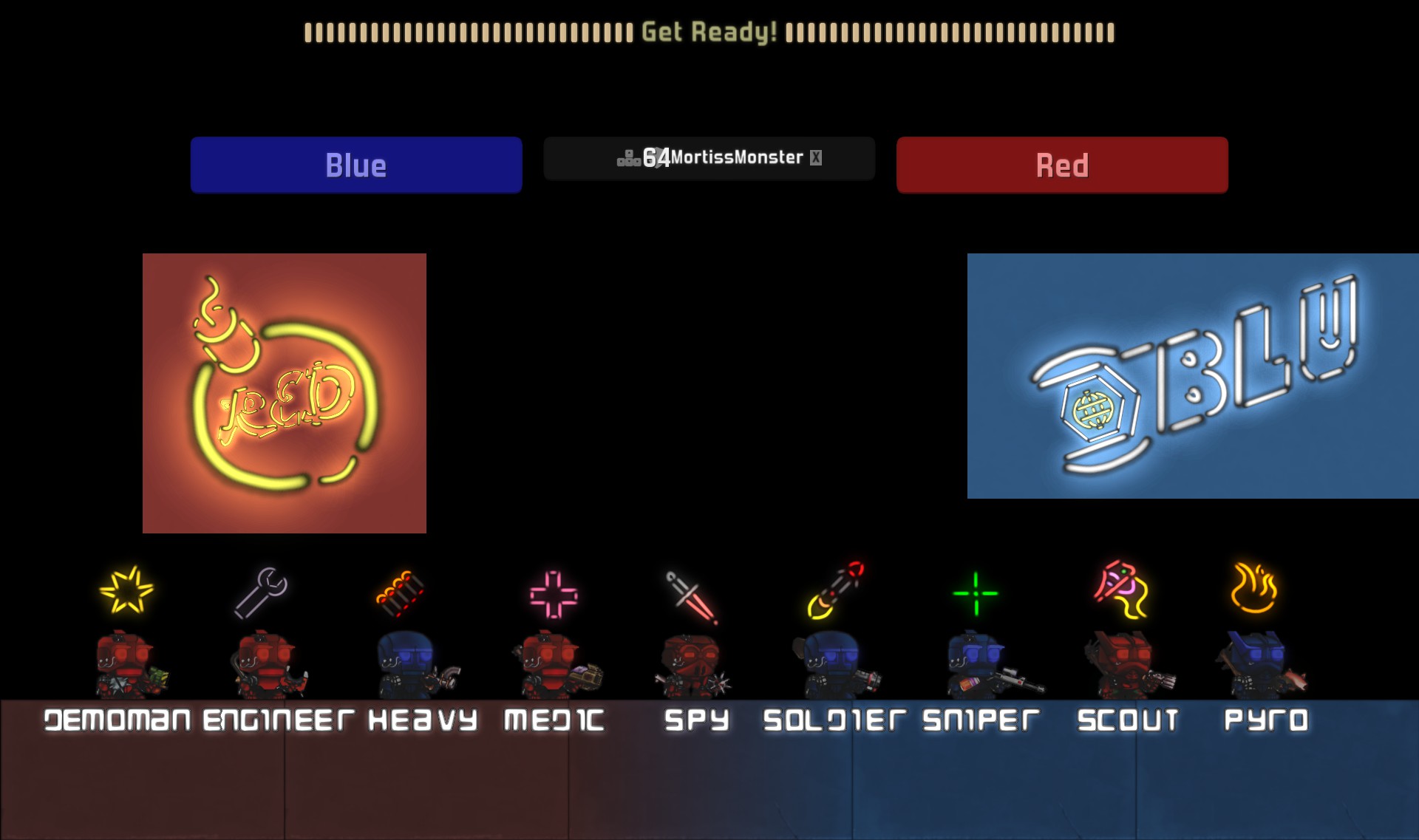 This map uses a class system based almost entirely on the classes from TF2. Each class has their own hull and weapons/equipment that they spawn with. Below are their current loadouts.

If you have survived for a long enough time that you need to restock yourself, chances are you’ll be visiting a safezone. Safezones, like in TF2 2fort, are areas where players of a team spawn, restock with ammo, and retreat to safety. In Cobalt 2fort, there are two safezones on either side of the map; 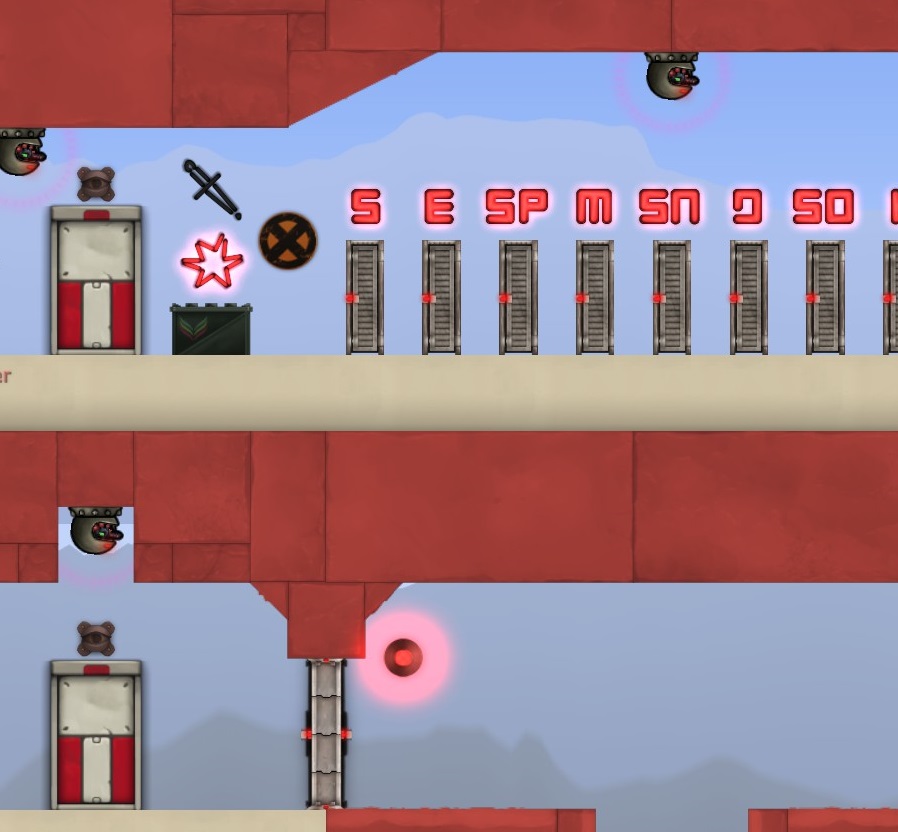 and another inside the base 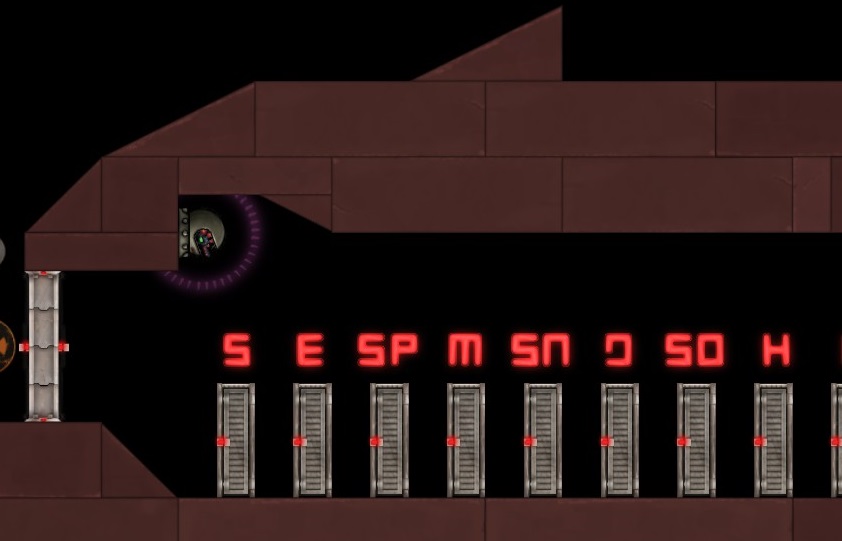 In these safezones are ressuplying lockers specific to each class, labeled with the appropriate letter(s):

The lockers can only be opened by their accompanying class, so a medic couldn’t open the same locker as a heavy, and vice-versa.

On the start of a match, the lockers will initially be inaccessible to all, but open up later on (give it about a minute or so). After you open them and recieve your supplies, the locker will not be accessible again for a shorter duration.

Some classes have items that they recieve solely through special containers located in the spawn safezones. (Most) of these can be opened from the start of a match and have a delayed restock time. 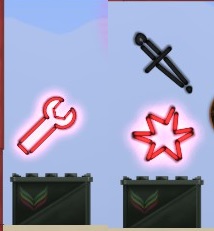 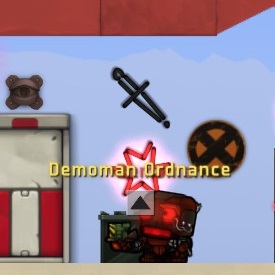 – Available from start of match 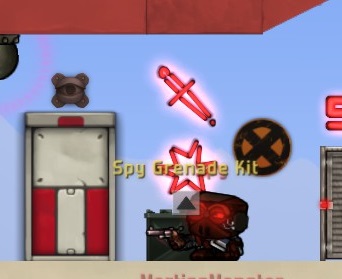 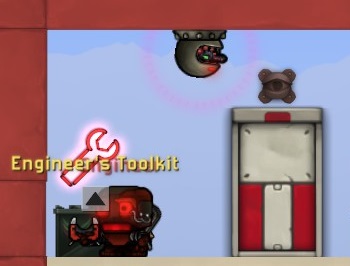 – Available from start of match

Supply crates’ availability are indicated by the lights above them. If they are lit, they are full. If not, empty.

There are some special game mechanics at play in Cobalt 2fort that allow the engineer to function.

Of the buildings constructed by the engineer, the sentry is key to his defensive capability. So naturally, you are given portable sentries from the toolkit at your spawn, along with some other emptied weapons. Why the weapons, and why are they empty?

If you don’t already know how portable sentries work, they’re throwable summons that use whatever weapon you’re currently holding, and have infinite ammo (unless the weapon you gave it was broken). For engineers, the empty weapons are useful because, while they cannot use them, they provide a powerful defense for the sentries (and whatever you’re using them to protect). Beware of hack grenades! 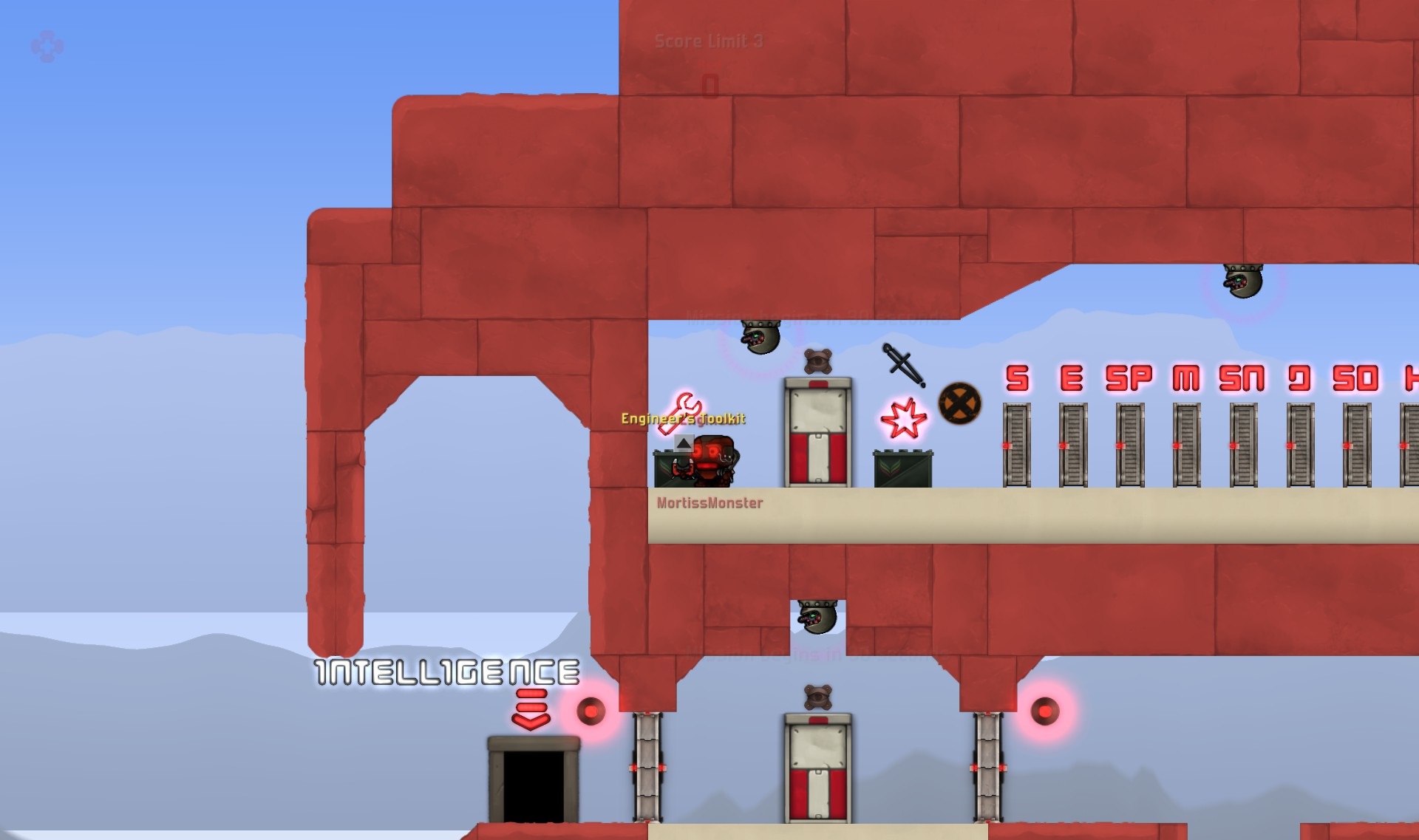 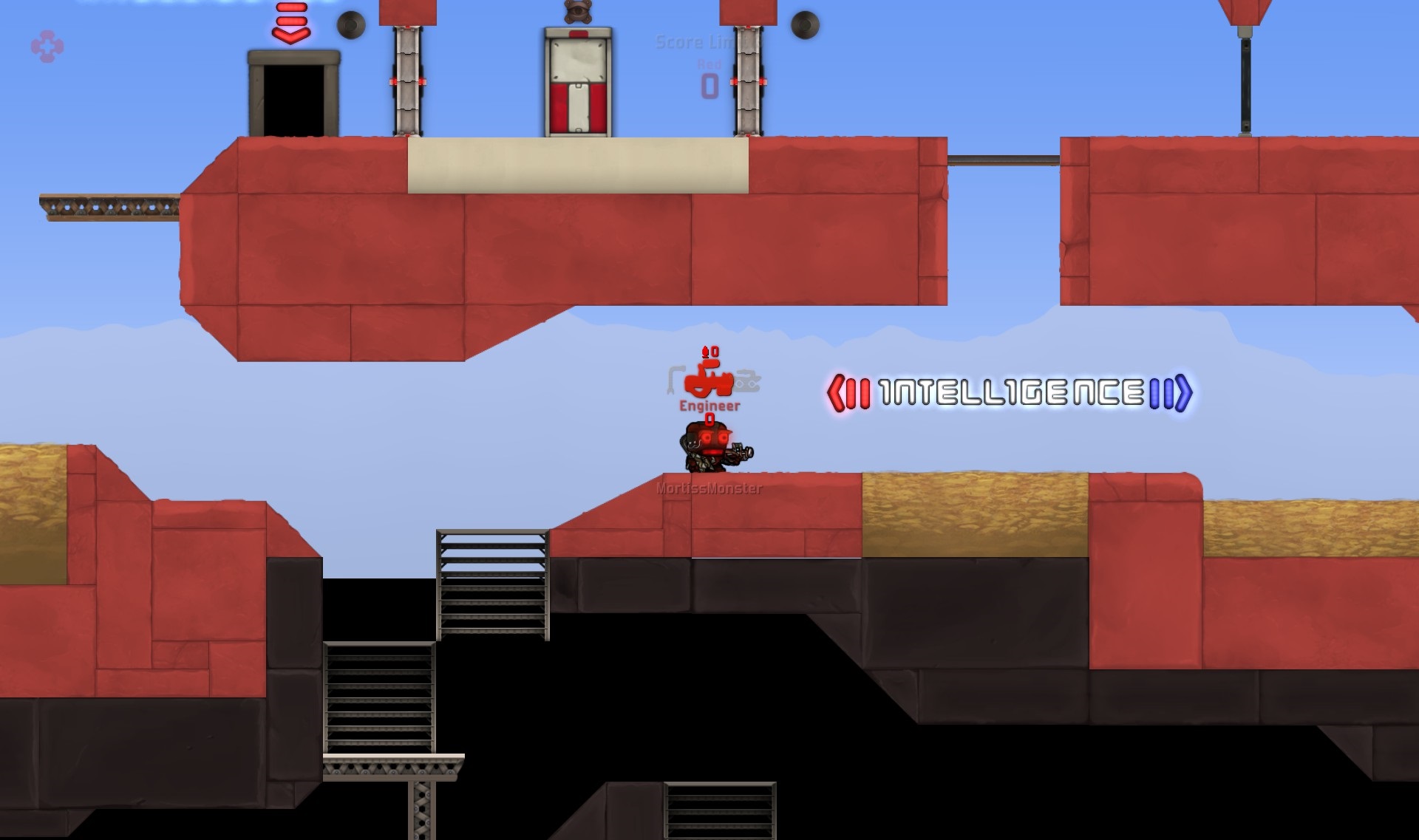 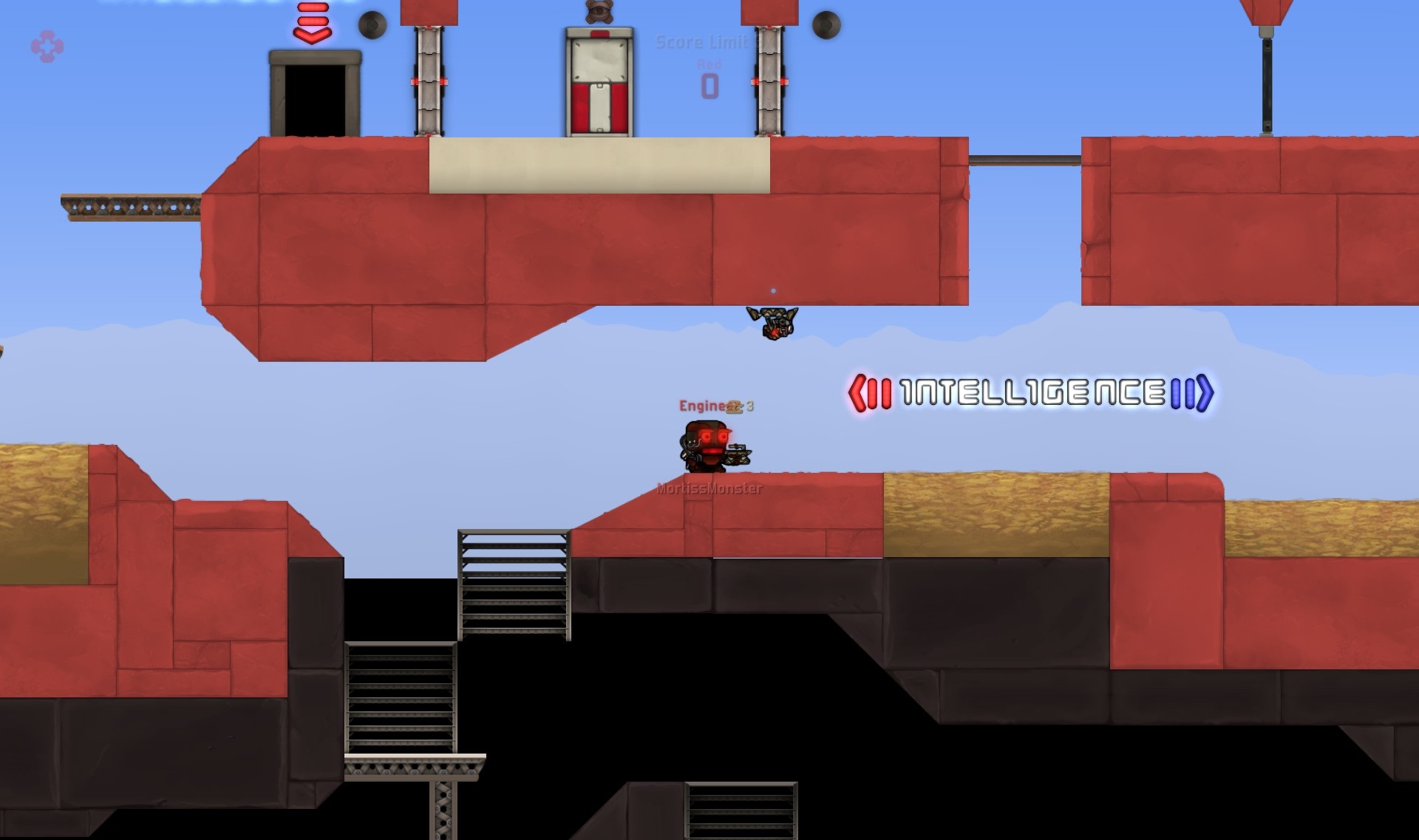 To prevent severe class imbalance, there are two zones in each fort where engineers’ sentry weapons will despawn (be removed fromt their inventory). These are indicated by circular signs crossed over with an ‘X’.

One across the way from the toolkit:

And another in the base: 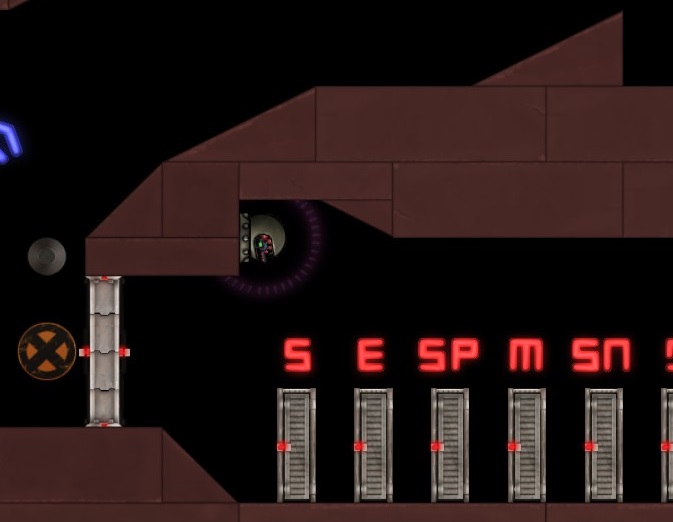 Going beyond these signs will result in having your sentries’ weapons taken away*.

* Note: Picking up items from engineer’s toolkit as anything other than engineer will result in the weapon being removed from your inventory

All of the doors surrounding the safezones are team-sensitive, meaning that a blue metalface shouldn’t be able to get into red spawn, red into blue, etc. 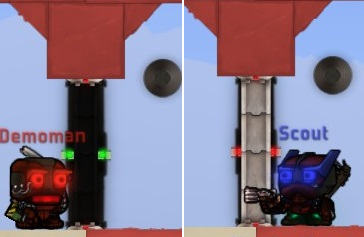 Under special conditions the doors will be locked.

At the start of a match there is a buffer period of about 30 seconds after the first player spawns. A voice will periodically call out “Mission starts in [X amount of time]”

After the 30 seconds has passed, an alarm will sound and the doors will unlock to players. This is shown by red lights near the doors that will deactivate when the doors are passable.

Another condition where the doors will be blocked is when one or both of the teams’ plugs have been captured. In this case, the team with the enemy’s plug will not be able to access their safezones from the outside. Teammates will be able to leave, but cannot re-enter until they die or the plug has been returned/captured. 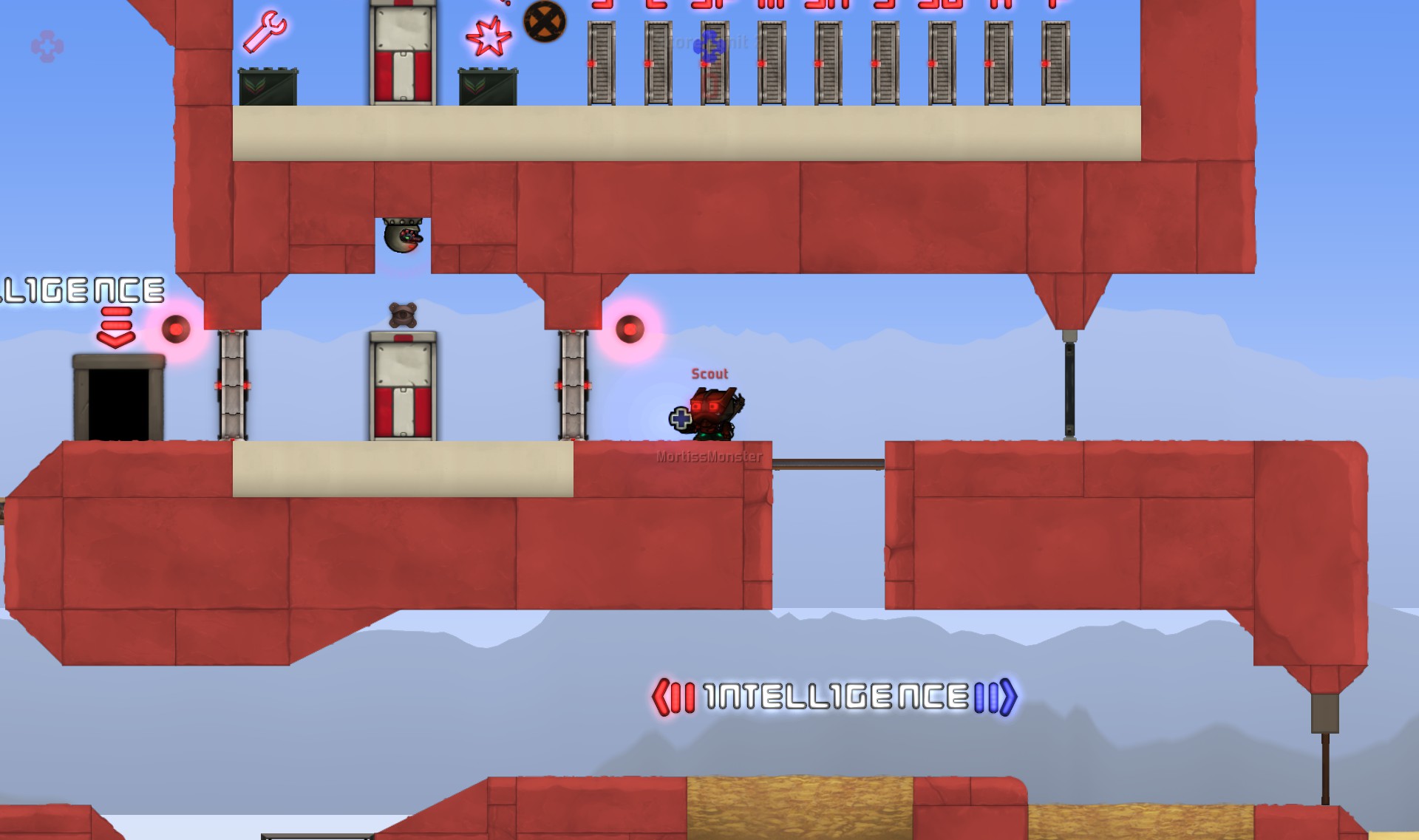 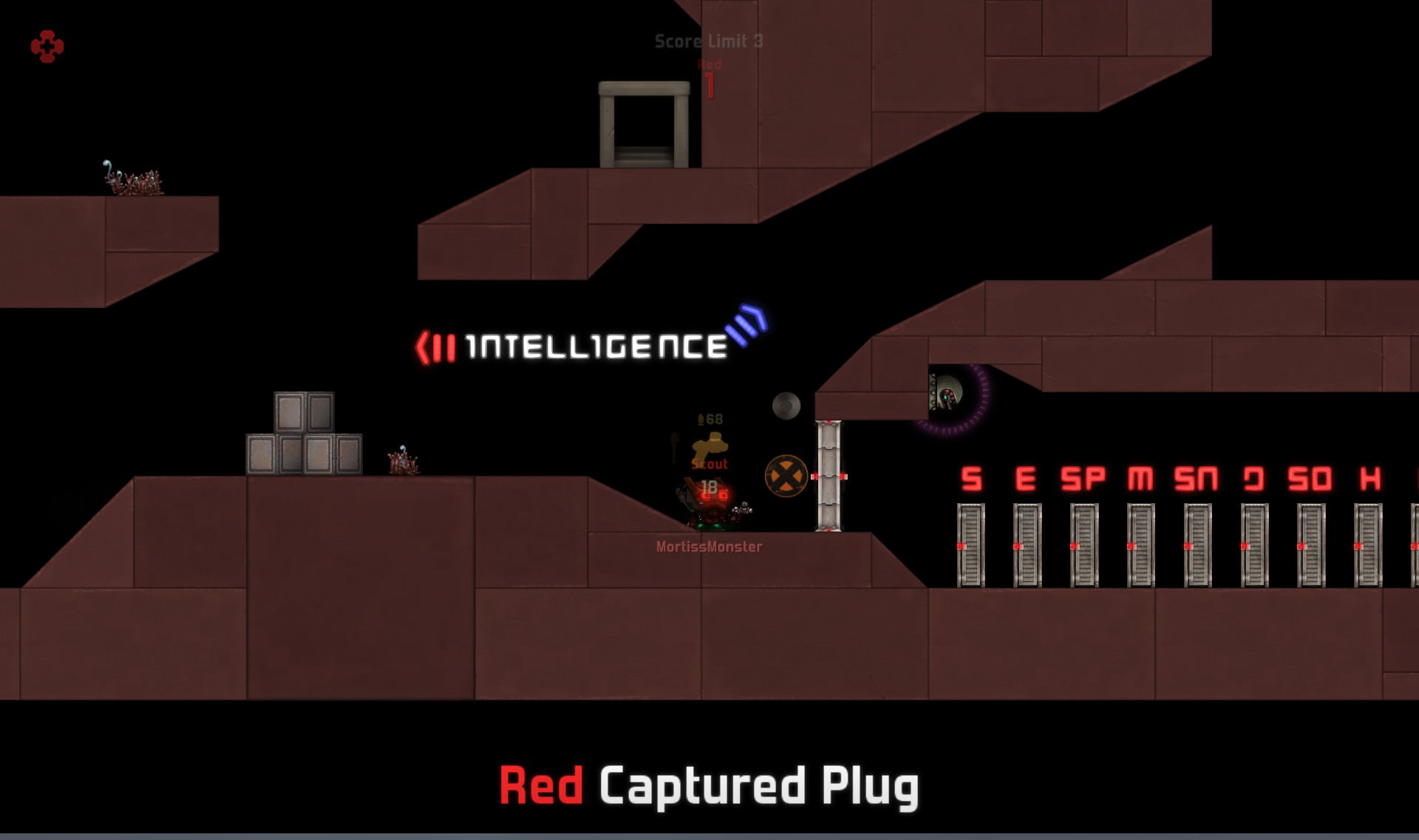 … And if one were to somehow sneak into an enemy team’s safezone… It wouldn’t be very fun. 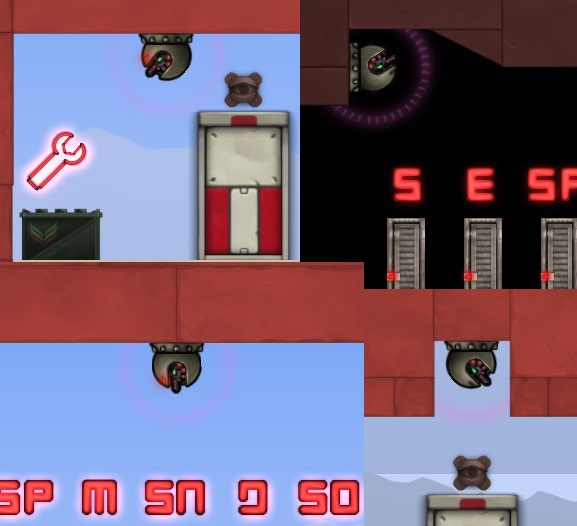 The Gamemode (and Its Limitations)

Cobalt 2fort uses scorematch , a uniquely customizable gamemode that allows for such a map as this one to exist. In scorematch you are able to create classes like the ones from earlier and select them on spawning.

After you spawn, all you need to do is select the class (shown as the metalfaces you can play as) by pressing the arrow keys and confirming (default key X). 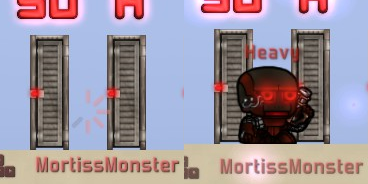 However, there is a catch. Once you pick out your teams, classes, and then spawn, you are stuck with your class until the next time you load the map. Because of this, it would help a lot to coordinate strategies with your teammates. (continued in next section)

Since you are not able to switch classes after the start of a match, communication and planning will be critical to your team’s success.

I suggest discussing strategies with your teammates in the round preparation stage before you pick your class. Using team-chat would be very helpful for this (and general gameplay in the future). If you don’t have a keybind for it, I’d create one. 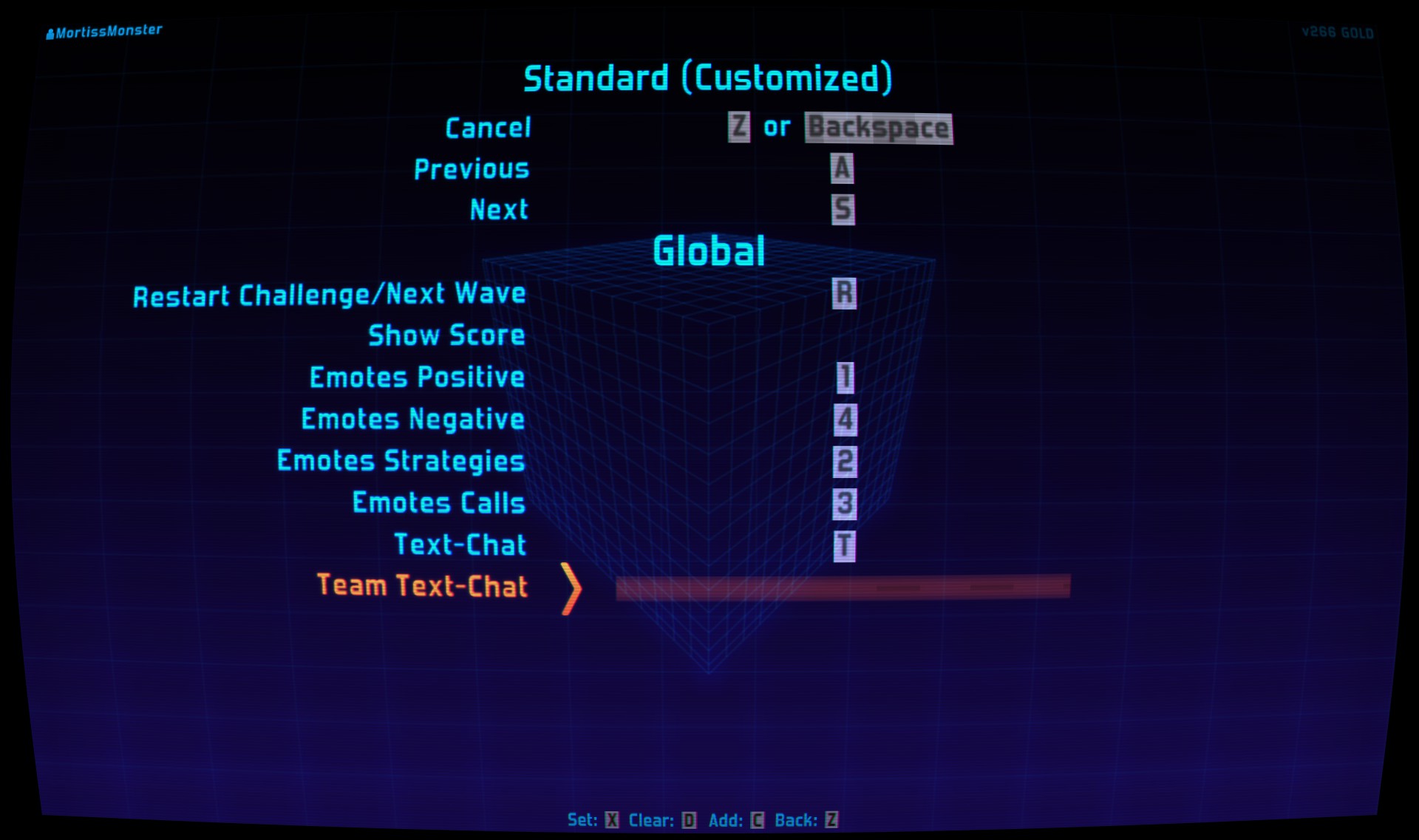 To have a fair, fun match, host with a bare minimum of 6 players (3 on each team). Any less defeats the point.

IMPORTANT: A bug in scorematch causes the host’s game to crash when players join in the middle of a match, kicking everyone else out at the same time. To avoid this, make sure everyone who is going to play is in the lobby and set it from invite-only or public to private.

How to Host Cobalt 2fort Online (and Where to Find It)

The prefix online scorematch (also called custom deathmatch) uses for its files is “d_”, which puts in in the deathmatch category, which is where you want to look when trying to host.

(make sure your lobby is on public or invite-only so people can join!) 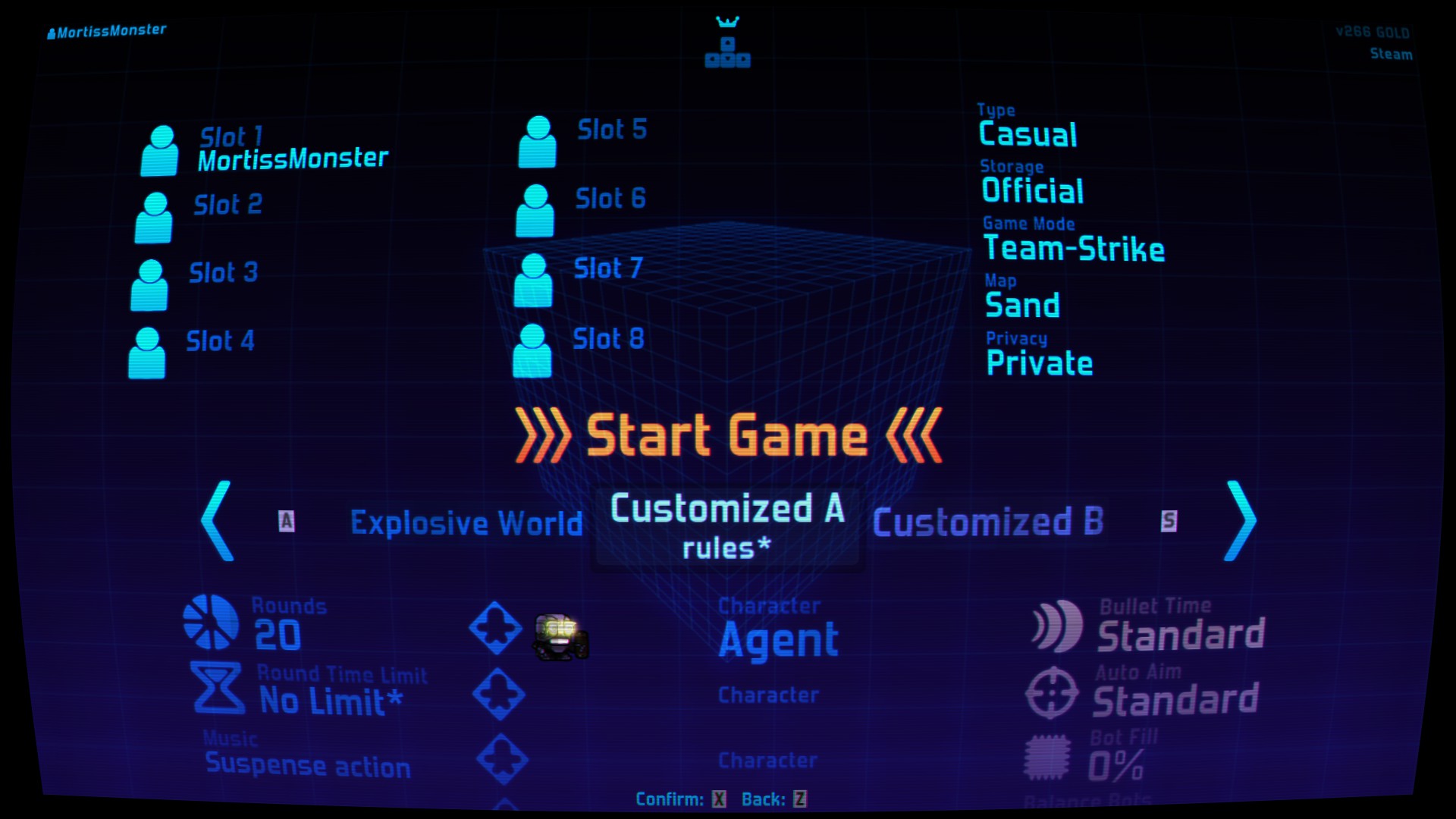 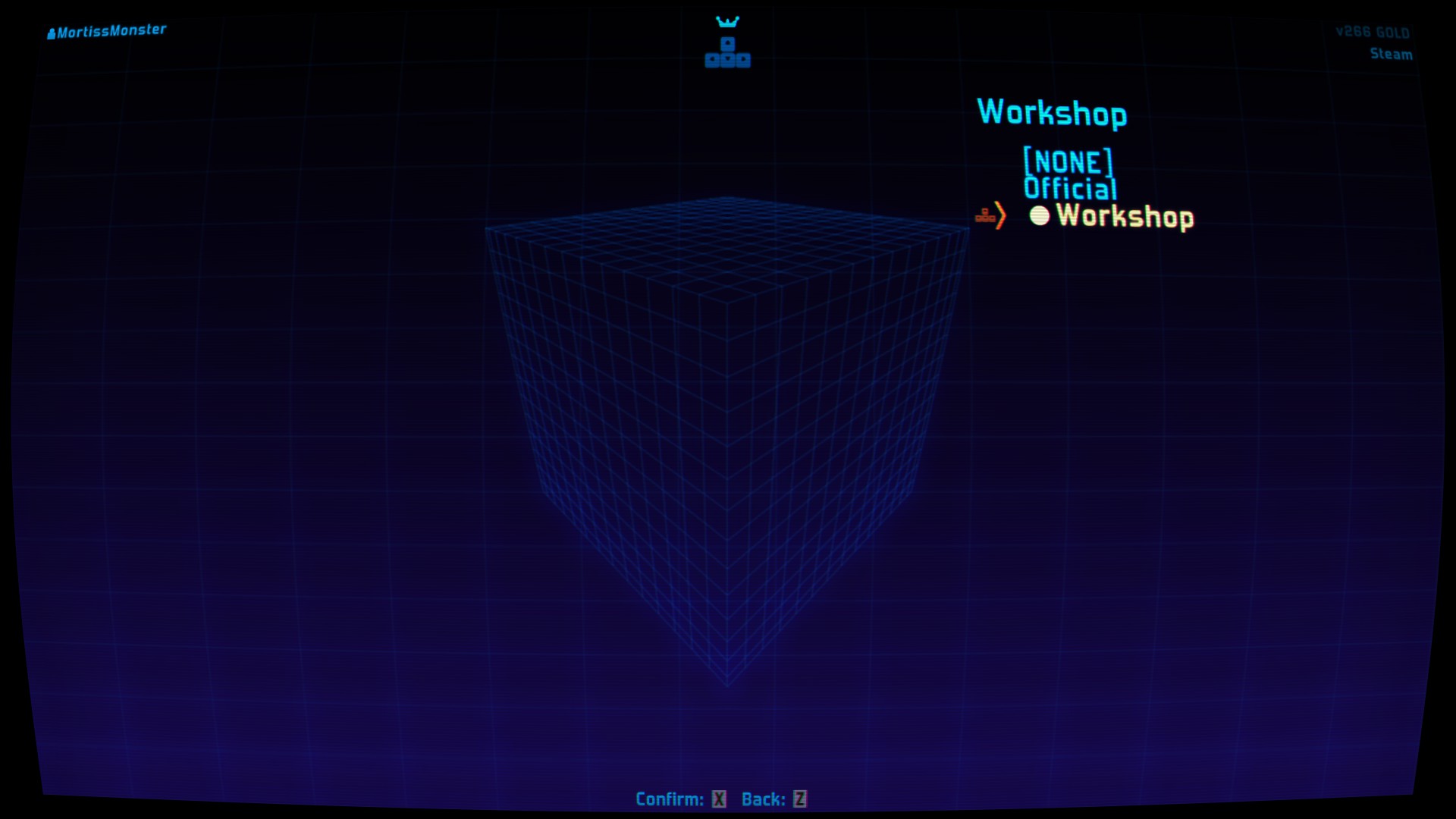 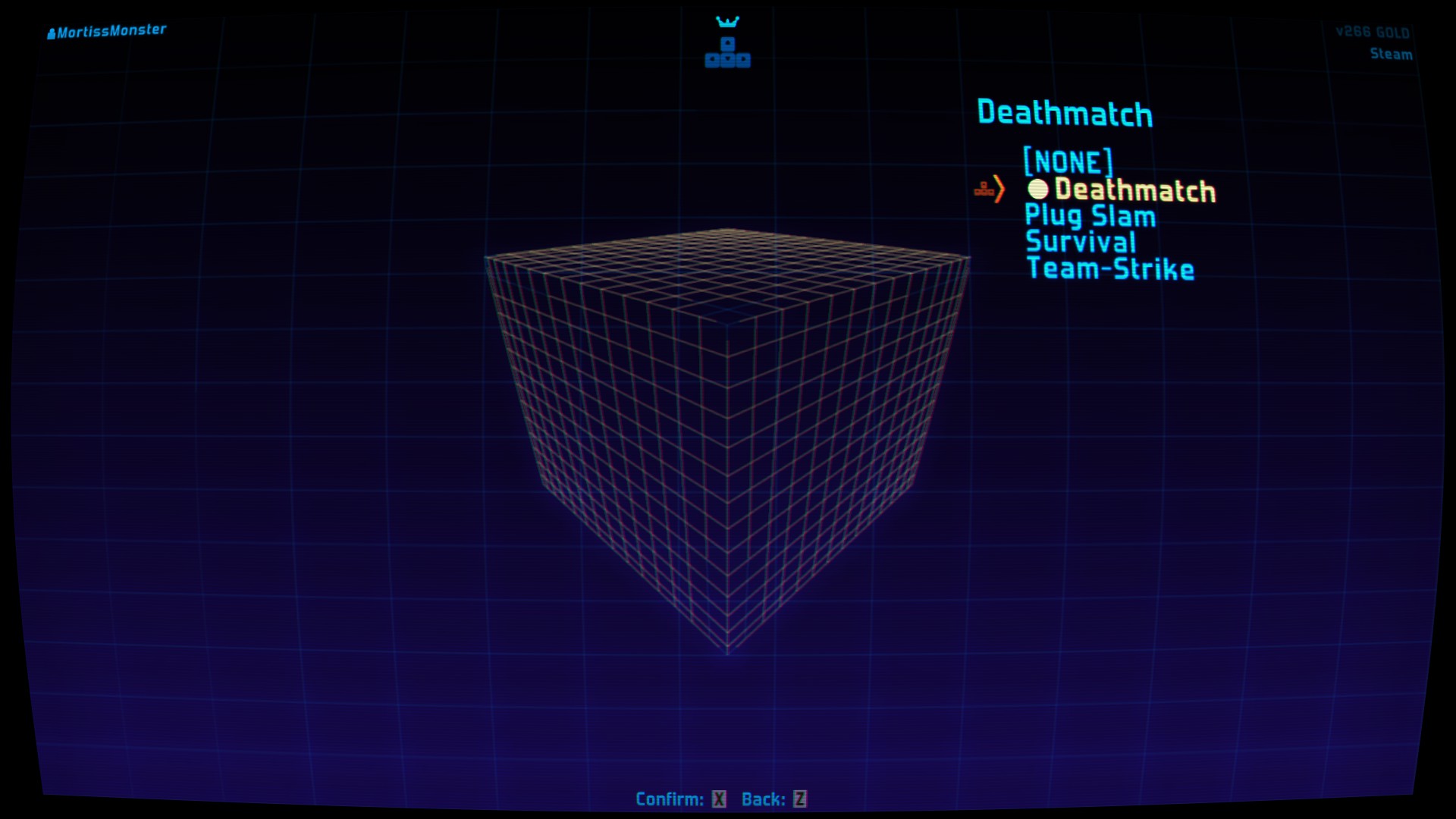 These are the bugs to my current knowledge. More may be added or taken away in the future with further testing.

– game crashes when player joins from out of a match

– actor displayNames can’t be seen by players other than host

– players can grab their own flag sometimes (rare)*

Cobalt has released on Feb 2, 2016 on steam, this guide was written by MortissMonster