A detailed Elementary Evil Guide provided with advanced maps. In here, I’ll give you some tips on how to complete the level more efficiently and maybe even score S rank.

This level contains 283 Soul Shards split between the two zones — 127 in the first and 156 in the second. Let’s talk through each zone separately.

Here is the map: 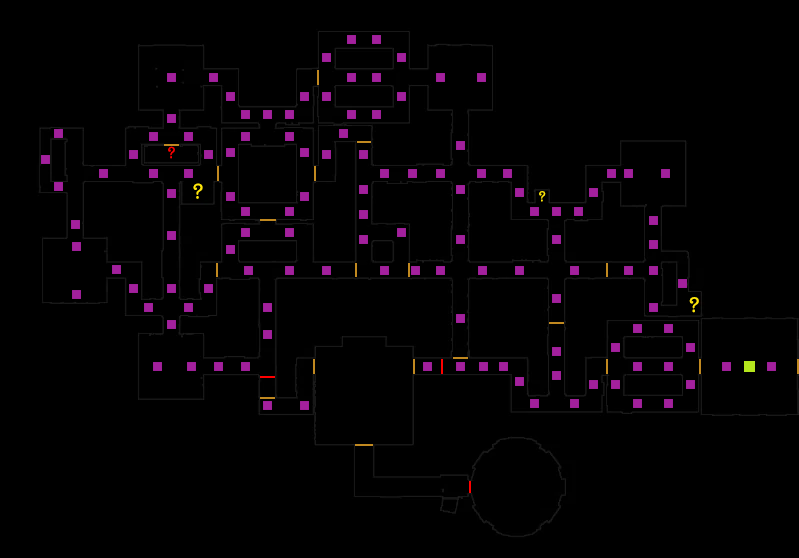 Yellow lines on the map are doors, and red lines are barriers which can be broken through using Speed Boost. Red question mark indicates the mysterious room, but it doesn’t count as the secret in level results (hence not necessary for S rank) — basically, it’s just a lore element.
Your only enemy here is Agatha. Once you hear her say “Ready or not, here I come!” after breaking the barrier, she spawns in here: 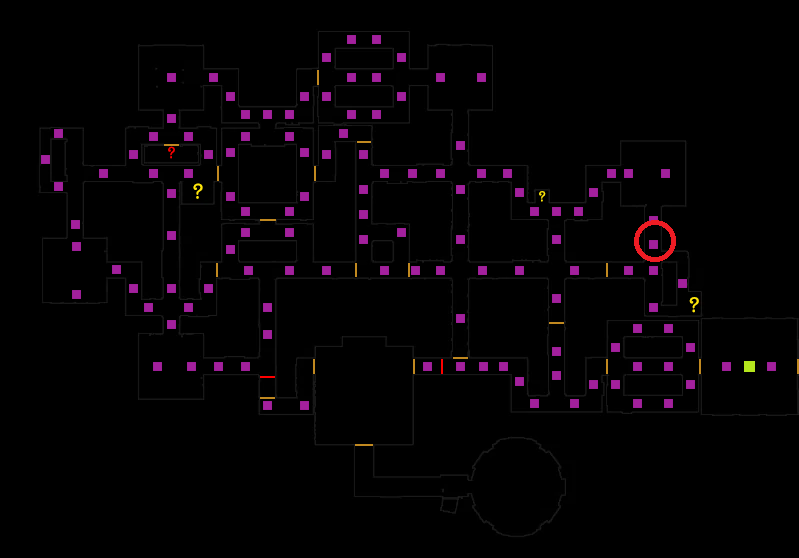 Let’s talk about her tactics in detail.

Her AI rules are as follows:

And now, let’s get to your tactics.

First of all, you’d really want to play with earphones: you’ll be able to tell the direction and loudness of Agatha’s sounds — whether she’s at the left or at the right from you and also how far she is. (If you hear the sound with both ears, this means she’s either ahead or behind). It’s really vital for completing this level.
Then, your route. Tough point here is that Zone 1 is has oblong shape and some pretty long hallways where Agatha can very likely spot you. Also, regarding the fact Agatha’s following you, you might end up turning around right into her arms ’cause you’ve got to the far right side of the map. It’s like, first she was coming after you, then so came you after her. To avoid such unpleasant situations, I’ve devised a starting path for this zone. 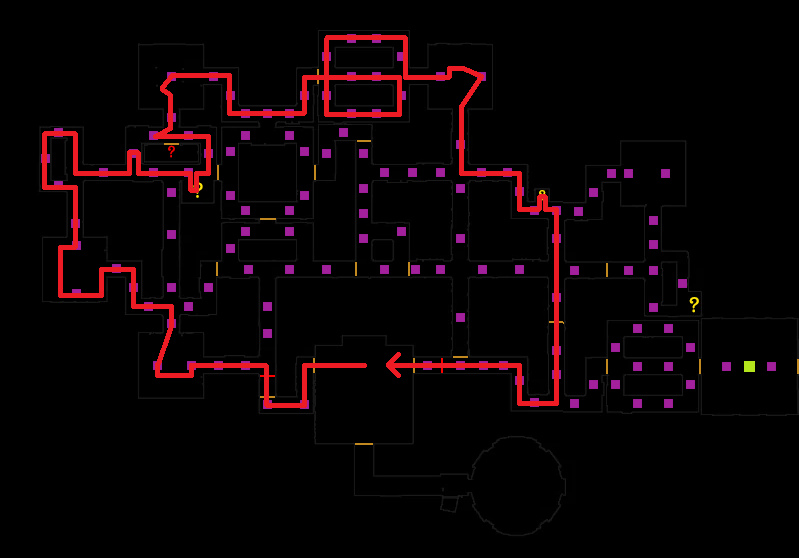 If you’ve watched my Monkey Business Guide, you’ll see that the idea here is similar: you take the outer-most hallways and collect a streak of secrets, not taking Stun Orb and Reveal Shard if they appear on your way. But I’ll also highlight that here you should try not to bump into walls or desks and use Speed Boost whenever possible. Here’s why: at the end of the path you’ll need to take a steep turn right and if you weren’t fast enough, Agatha will spot you, while what you actually need is to mislead her and sneak back to the auditorium.
Note: I haven’t included all the secrets in this path like I did in the previous guide, ’cause if you haven’t beaten Elementary Evil yet, your Speed Boost level won’t be enough to get ahead of Agatha unspotted from the far right side of the map (unless you fool her somehow — there are two directions out of the secret corner letting you mislead her). After all, you may take the remaining secret later.
So, if everything went smoothly, you ended up right where you started, safe and sound — but it’s not over yet. You need to advance further and collect the remaining shards. That’s where the left Stun Orb and Reveal Shard are coming in handy — you’d most definitely want to use them in order to safely collect the rest of the shards. 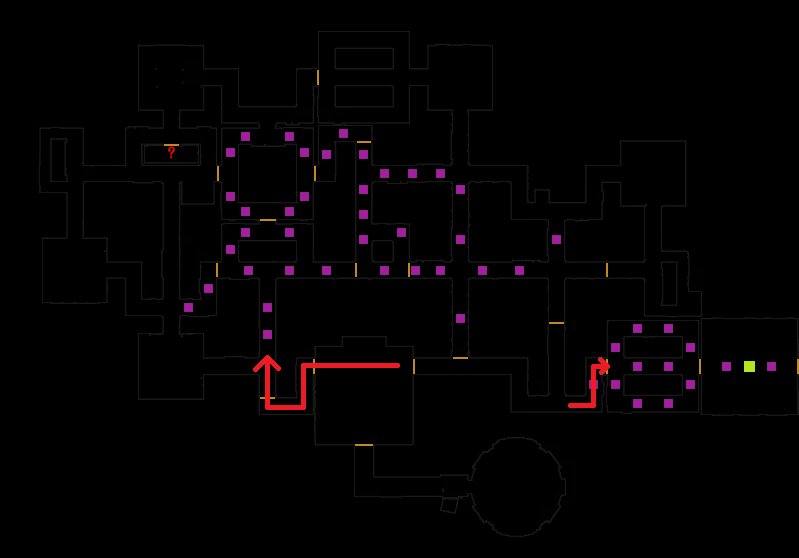 After you’ve collected all the shards in the main area, carefully proceed to the lower right angle where the Ring Altar is placed and collect the shards there (note & remember the trick used — leaving what’s near the exit for the ending). Agatha will disappear after you collect the last shard in this zone.
Also, the tips I haven’t mentioned before: 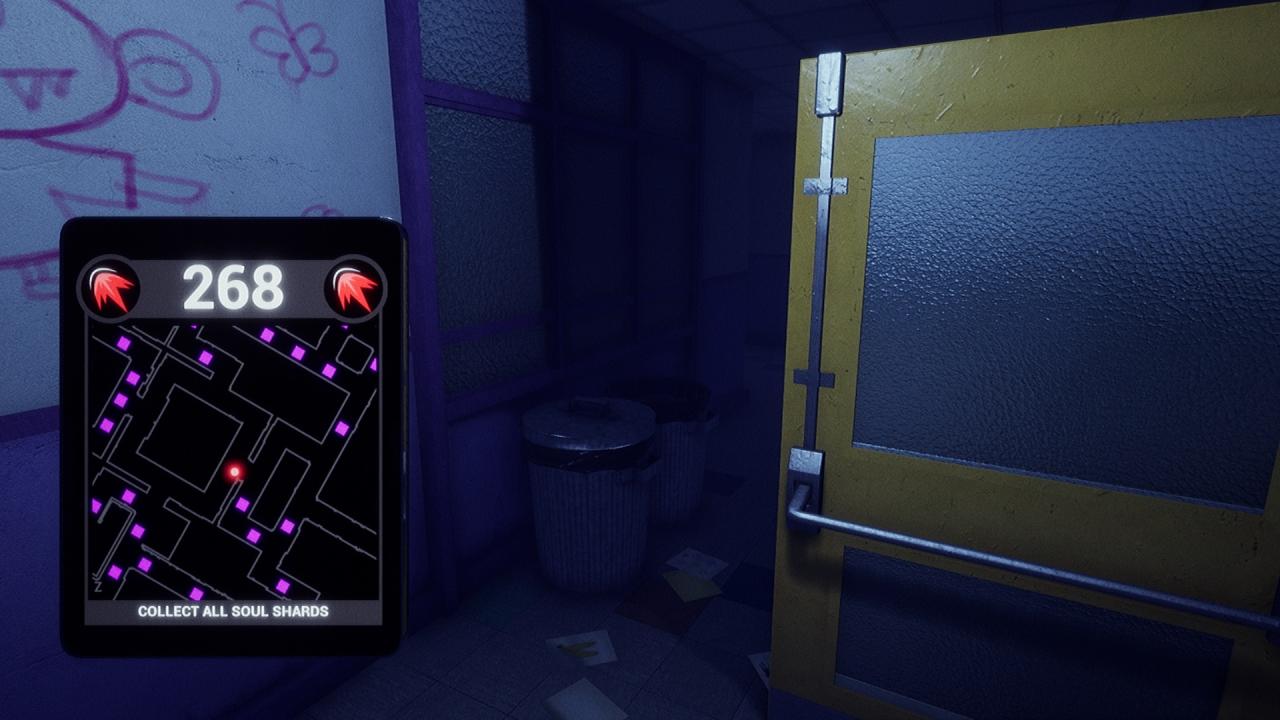 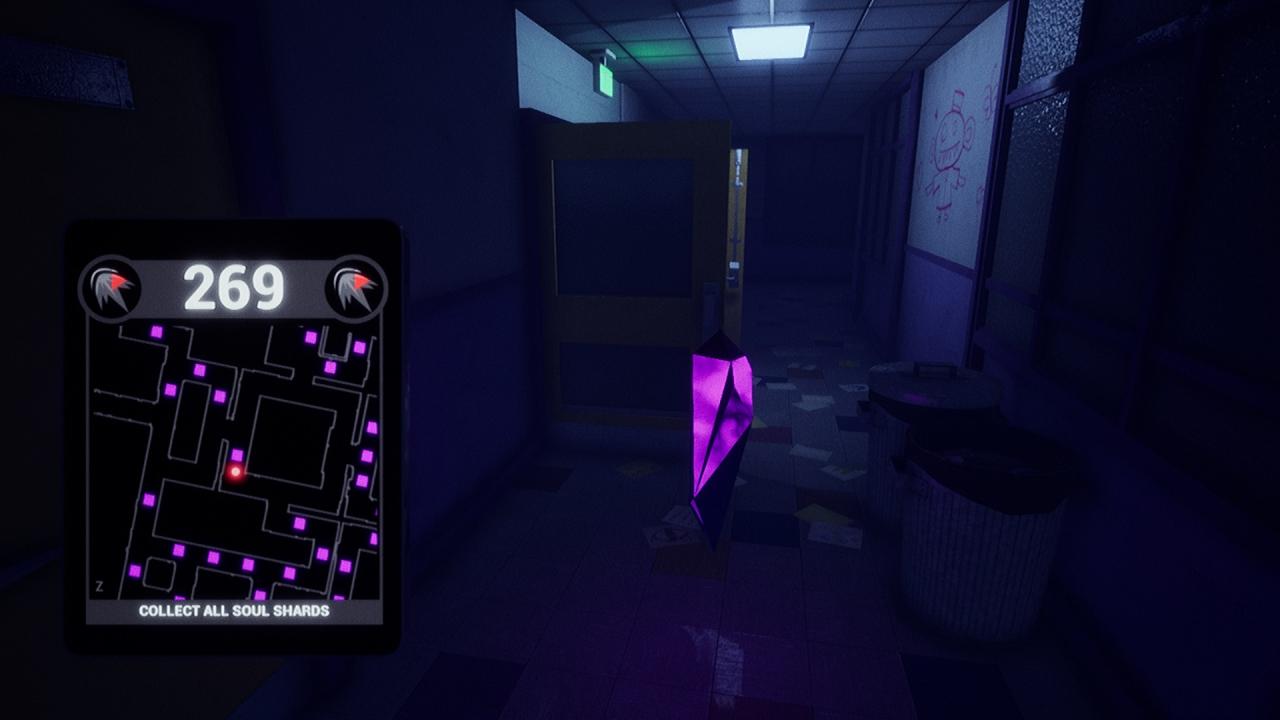 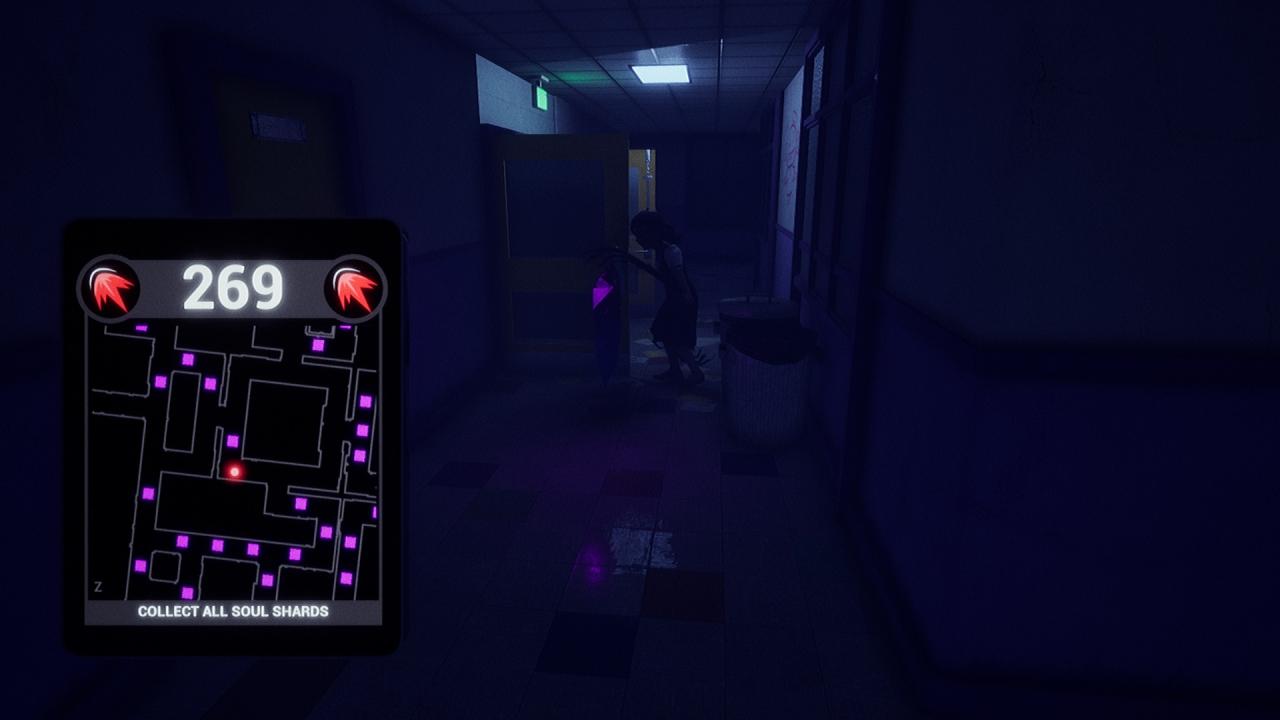 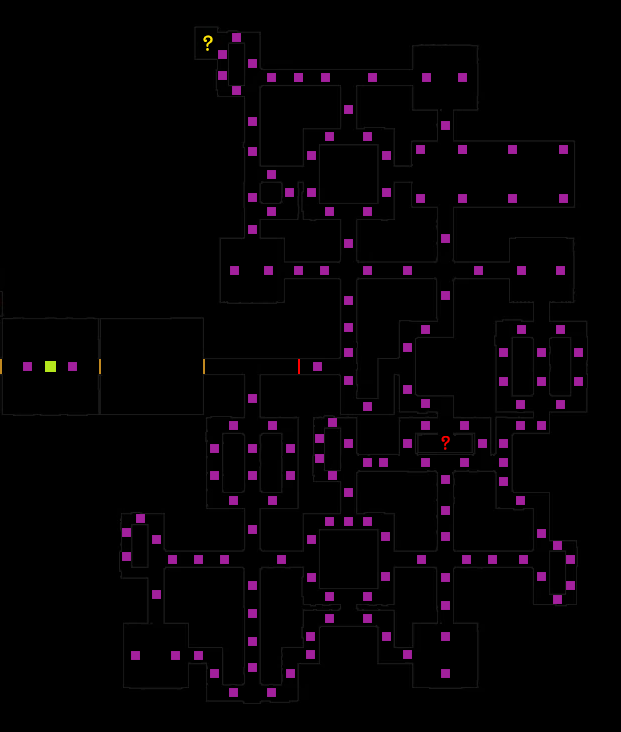 This map has one common secret and one mysterious room. Again, the latter isn’t required for S rank, but, if opened for the first time, it grants you the Steam achievement.
A few seconds after Bierce’s voice line “It’s her victims! This school has become her dollhouse!” Agatha says “Ready or not, here I come!” and spawns here: 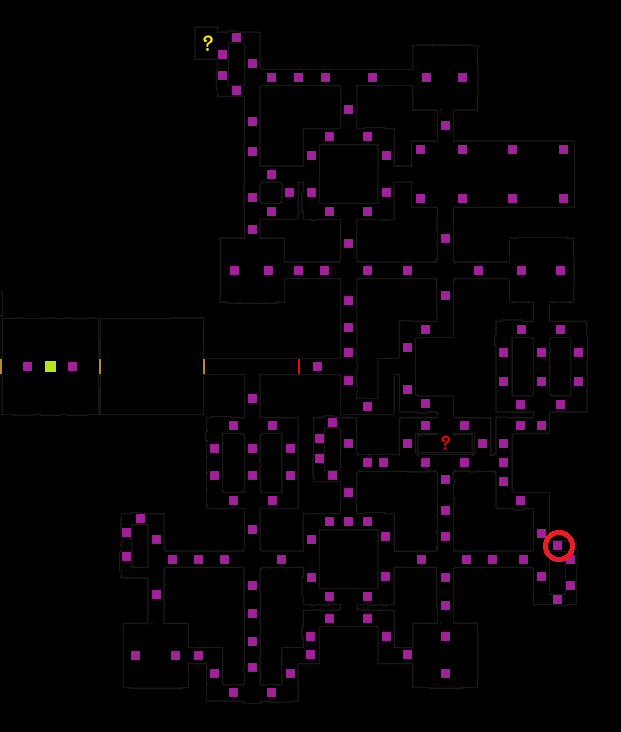 And, like in the previous zone, Agatha is your only enemy here. But what Agatha?

Very sly Agatha, here is the answer. Remember how she picked on you “cheating”? Well, now it’s she who cheats. Not only she can now teleport through doors, but also at random places on the map and, while pursuing you, in the direction you’re facing. Everything else remains the same. Here are some important things to note:

First things first, the starting route. The tough thing is the randomness of Agatha’s teleportations which can ruin the whole route idea. But, here is some pivot one I’ve come up with while playing: 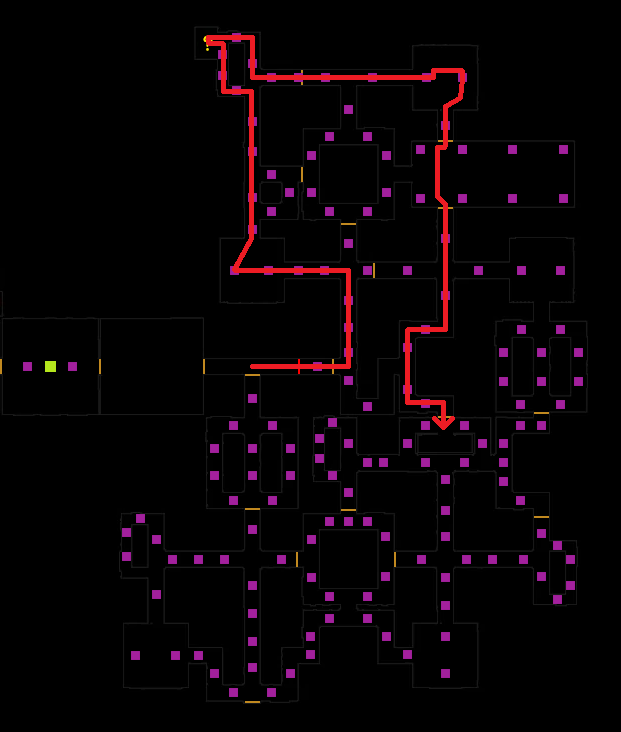 The secret is not the main reason I’ve devised it like this (in fact, you may even leave it if you’re just aiming to complete this level anyhow, this will give you more time). The point is that, if you take right instead of left at the beginning and head to the center of the map, you’ll be more likely to encounter Agatha, if not even say — bound to. Why? The answer is simple. Sure, Agatha may be teleporting now and then — but remember her primary goal is still tracking you down. And, of course, she’ll have more chances to succeed if you’re heading to the center than if you’re taking far left side of the map, ’cause the distance between you and her is less (recall where she spawns). And that’s virtually the motivation for going left.
However, you should still be careful and, again, use your Speed Bost whenever you can (sorta twice on this way), try not to bump into the walls and pay attention to Agatha’s sounds’ direction. By some accident, she might spot you, so you have to be ready for it. And now let’s talk about your tactics in detail.

Once you’ve taken the ring piece, there will be a short cutscene where Agatha scolds you. After that, Malak himself will chase you on your way back to the portal through Zone 1. But here come some additional obstacles — fake portals. 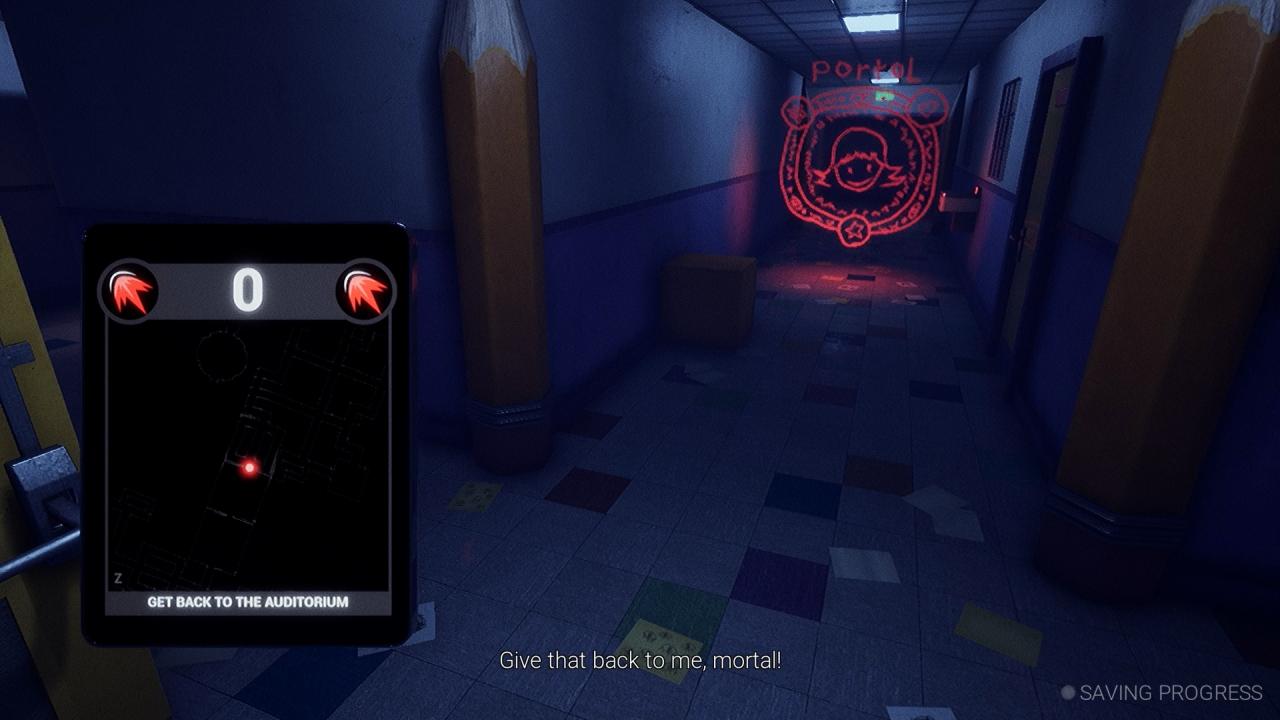 Don’t enter them — unless you haven’t had enough of Agatha chasing you for two zones and want some more. If you hit such portal, Agatha will spawn ahead of you — with Malak behind still chasing you it’s almost a certain death.
Fortunately, these portals have predefined positions and there actually is a safe way around them (and respective Steam achievement if you follow it, btw). Here it is: 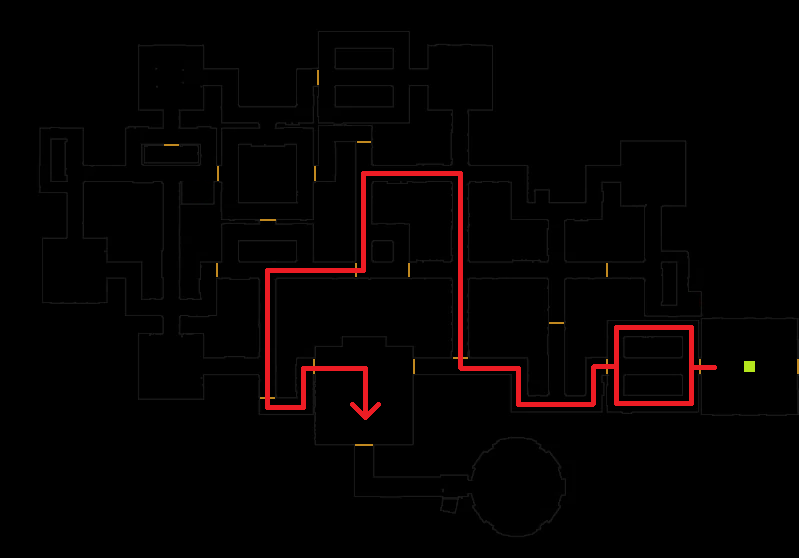 Forked line in its beginning means that you may take either way, both are free of fake portals. This is also the shortest pathway to the auditorium. But wait, how can it be? There’s actually the door before the long turn that leads right to auditorium. Yeah, right, and Agatha knows that, too — so if you try to enter it, it will slam at your very face with a snide Agatha’s “Ah-ah-ah! No shortcuts” — and hello Malak from behind, he’ll be already right there to catch you up. So, just follow the path instead.
When you enter the auditorium, the door closes and pursuit ceases. And when you head to the exit door, there will be a little scary cutscene — Agatha appearing right in front of you, saying “Going somewhere?” — then teleporting back and creeping to you, trying to finally end you. But Bierce opens the door, and, while Agatha is surprised, just quickly speed boost out of there and get to the portal; there will be really enough time so that she won’t catch you up most definitely. Remember, however, that there’s the school bus obstacle which you may run into. And that’s it!

Have fun and good luck!