This walkthrough contains gameplay mechanics and will walk you through all of the main game. It doesn’t show all the secrets or achievements or mini games, but does explain how to look for them. Obviously, there are spoilers.

Right-click anytime to get to the menu, scroll by dragging up/down, select by left-clicking.

Part 1: The Dark Beginning to the Title Screen

Train View: This is the front of the train, covered with sheets of metal. There is a lightning storm. Time to wake the train up and get rolling.

Tower (Dark): It’s too dark to see. Let’s get some power going and brighten it up.

Train View: Run over the chains for the piece on the lower-left. The metal comes loose and hangs down, revealing a Car with a leaf shape and a covered port under it. This is the Leaf car. The Leaf is dark, so there’s nothing to do there yet.

Under the Leaf car is a panel. It has little lights when you hover over it.

Front Engines: The rivets have a wedge shape cut in them. They match the shape of Ann’s feet.

Train View: The train continues on. Title Card. The train busts through a barrier. The Leaf symbol is lit. Enter the Leaf Car.

Train View: Sweep Ann over the chains of the metal sheet to the right of the Tower Car. They fall, revealing the Cross Car. Under the Cross Car is a button with a flame on it.

Cross (leaves): You need to illuminate this car. At the bottom of the screen are tiny candle flames.

Inside the Chapel: There are 4 gravestones with clocks on them. Note the times:

Each of the stones also has part of a wreath (Nest).

Train View: The Leaf Car is illuminated. Go inside.

4. For now, fill up your fire and switch the button so the flame is pointing down (down = deploying).
5. Leave.

Train View – Boar Encounter: A mechanical boar will attack from behind. Press the Fire button on the bottom of the train to burn the boar.
Scheduled Stop: Fire Fighting: A vehicle in front of the train stops the train in front of a burning building.

Train View: Remove the rest of the plate from the top-left chimney. You will see a button with wavy lines. The Wavy button diverts power from one system to the other, so the sigils can light up.

Leaf (smelter): There is a gear mold at the front of the beehive-shaped building to the right. You need to make a gear for the Chapel in the Cross Car.

Tower (leafy): It is raining.

Cross (dark clock): The last time we were here, the Chapel was available, and there were clock faces on gravestones.

Car Change: Use the Crane to swap the Tower and Leaf cars, so the order is Tower – Leaf – Cross – Snow, with the Leaf and Cross cars lit. Go to Leaf. 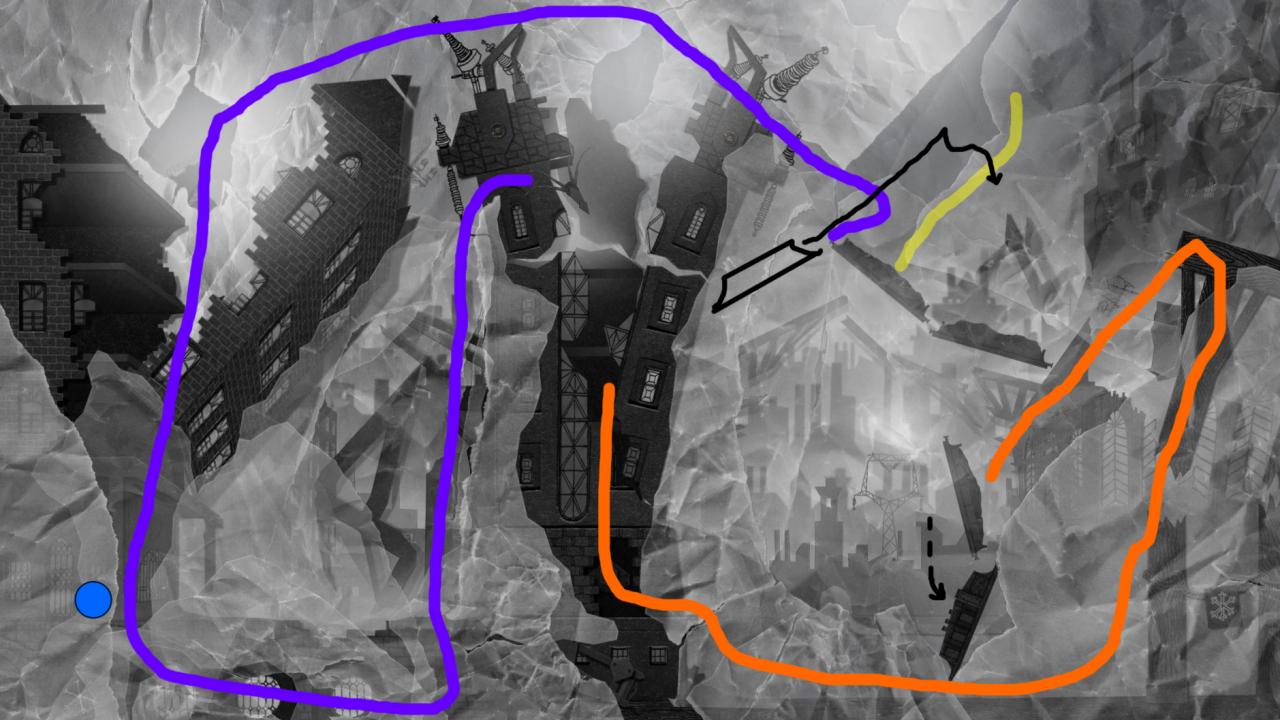 To push the car to the foreground (purple line):

To get to the car in the foreground:

Scheduled Stop: Boar attack: Another metal boar attacks the train from behind. This time, it will hold on and the train will stop on an Elevator with a Boar sign. There is an arrow pointing Left and another arrow pointing Up. *Using the target display here will get you a Neon Boar Head collectible. Go in whichever direction you’d like.

Enjoy the cut scene. The train will pass the Abnormitron. Eventually you will reach the other side of the elevator. Select the Left Arrow to continue.

Scheduled Stop: You are forced to stop in front of a tree building. Go to the Control Room and enter the Targeting System. Send Ann into the hole in the glass above the neon tree sign.

Electricity Puzzle: The goal is to light up all the buttons on the sides of the chair, which will send electricity through the big power cable to the power sign on the right side of the screen.

Tree Room: This room has two sections: Root Level and Tree Level. You must move Ann around the edge of the floor to get between the sections.

Train View: Fill up on water if you need to, then grab some lightning.
Change Car Order: Snow – Tower – Leaf – Cross. Go to Tower.

Tower (tornado): The goal is to shoot the spirits away with lightning beams.

Scheduled Stop: The train will be stopped on a Power Elevator.

Train View: At this point, your train will stop behind some waving Chimney Sweeps, and the engine will break.

Cross (light): The Claw lowers to give the sword to the statue on the right side. This causes two hook chains to drop by the Chapel.

Leaf (dolmens): Note the drawn Globe Chandelier. We need that for the shop in the Tower car.

Scheduled Stop: The Train breaks down, giving you an excellent view of the Purple Cathedral in the distance. Your Chimney Sweep passenger cleans one of the stacks to fix it. Go to Tower.

Leaf (warm): The Claw drops off the Blue Potion.

Train View: Change Car Order: Cross – Leaf – Tower – Snow: Go to Cross
Cross (yellow fog): Skele-squid is here, in the background. The Claw drops the Birdcage. You know what to do.

Leaf (snowy): It’s another constellation puzzle, so get wiggling.

Tower (flood): The claw places the Little Moon into the sky.

Train View: Go to the Library

Cross (forest): The Claw will drop the crates on the Crab, who will smash them.

Cross (webbed): There are no spiders in this game.

Leaf (frozen): The Claw will drop off the Triple Stone, which expands to show six Holders with web strands. It is set up in front of six trees.

Snow (melted): The Claw drops off all Gems.

The train stops, and a crate is added to the Snow Car.

Enjoy the cut scene. You are in the mountains. Time to release your bird friend.

Having trouble falling for the glasses wearing girl of your dreams? Well, this guide is for you.   General Overview This game...

Yorkshire Gubbins is a comedic point and click adventure game. In this guide we will walk you through the game earning every achievement...

Screenshot guide with written explanations about collectibles and achievements + ~80mins walkthrough with all collectibles...

Here is the co-op campaign walkthrough for Secret of Harrow Manor game.   Manor This is the first area of the game. There are...