the only way to learn how to mod from scratch is by looking at the document in the dead cells installation folder but no one wants to read that, so this guide will simplify that document just into how to replace the music files and make a mod out of it

First of all, you need to find your Dead Cells installation directory.
Directories

To copy paste one, just select it with your mouse and it’ll highlight the entire thing.
The Dead Cells Directory

Your Dead Cells directory usually found a “C:\Program Files (x86)\Steam\steamapps\common\Dead Cells”, but it’s not like that for everyone, so: 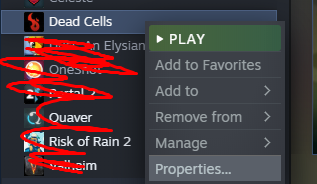 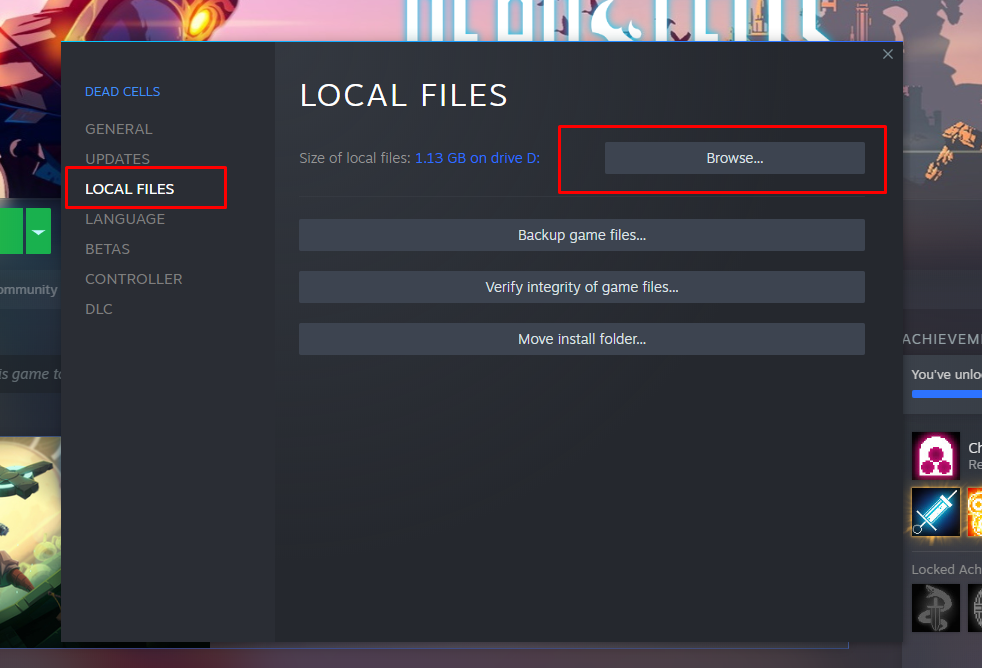 Whatever folder it brings you to is the directory of the game.

You may want to verify the integrity of the files in case something got deleted from the Dead Cells directory because there are tools included inside the directory that will help unpak the files.

“Unpacking” is basically extracting the files out of “res.pak” because it contains all the files that is normally hidden away. These files will be the ones we’ll edit so we can mod the game. 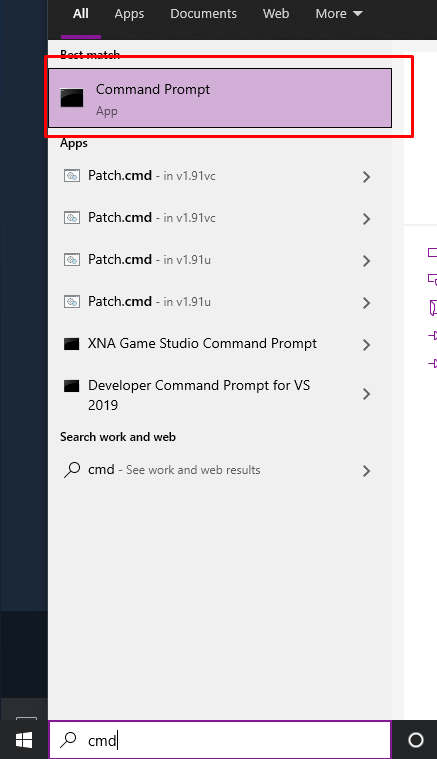 First, depending on the drive your Dead Cells directory is in, input that letter into cmd and then press enter.
D: Drive Example:

THE CMD LINE BEFORE COPY PASTING THE CODE MUST BE ONLY THE LETTER OF YOUR DRIVE, NOTHING ELSE. If there is something else, it’ll execute the code from whatever extra is added, and not from the beginning of your drive.

Put quotation marks (” “) on both sides of the any directory you copy paste into cmd because if
you don’t, cmd will count them all as separate commands and then this will not work.

(Output Directory): This is where the files will unpak, you can make any folder on your computer for this, just copy paste the directory of wherever you put it.
(Your Dead Cells Directory): Exactly what it says, use the directory you got from earlier in this guide.
[Don’t forget the quotation marks!]

If this is all done correctly, this line should show up:

Once that line shows up, wait a little while and eventually, all the files will extract to where you made your output directory.

If that line did not show up, recheck all the steps on this section and make sure you didn’t forget anything.

Navigate to your output directory and locate the “music” folder

You can mess around with the other files if you want to, and if you accidentally ruin the files, just repeat the unpak steps and all the files will replace and overwrite each other. This can also be used if you want to make more than one mod and need clean files. 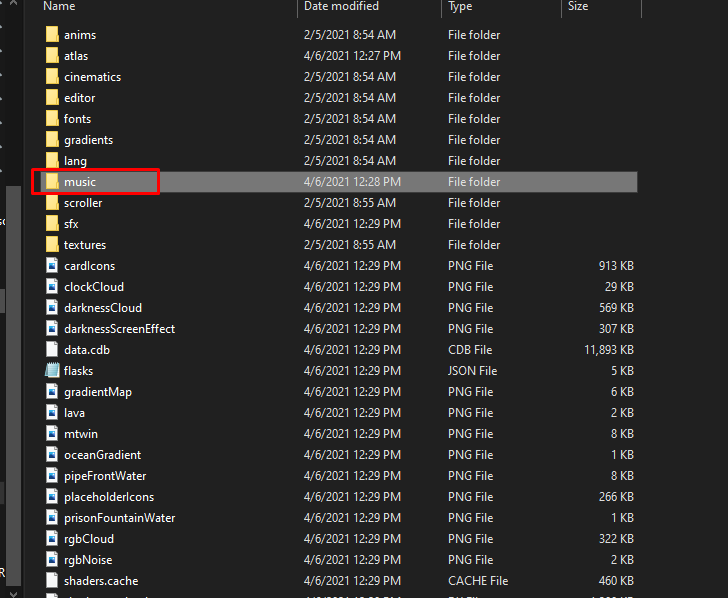 All the files in the music folder are named weirdly and most of the names aren’t even related to what it’s used for, so here is what all the important files represent.

ALL SONG FILES HAVE TO BE .OGG
(I recommend you use audacity to edit the songs to work in the game. For instance, delete any fading or silence at the beginning or end of the song because it’ll make it sound smoother in-game.

Note: “loop” and “intro” at the end of file names represent when they play. For example, loop plays when intro ends, but once intro ends, loop plays forever. Though, not every song has a intro for some reason and it’s just loop. Loops will be described with ^, which means it’s pointing to the file name above it because that’s what it’s linked to.

PrisonDepth: ] Once again both are used for Prison Depths but I’m unsure of
DC_Prison: ] which one is the right one, so make both files the same song.
prisoncorrupt_intro: Corrupted Prison
prisoncorrupt_loop: ^

Those are all the important file names, but you probably noticed I didn’t list a lot of files, well, that’s because they are either unused or pointless to change.

By this point you should have finished modding all the music files. If so, you’re almost done.
Dummy Mod

Go to the Dead Cells workshop and download the “Dummy Mod”. This mod is used to play-test your mods to make sure everything is working. It can be found here.

Once done downloading, navigate to its install directory: Steam\steamapps\workshop\content\588650\1405810340

Delete everything other than the settings. Make sure it looks like this:

Once done with that, move the settings file to another folder. This new folder will be used to upload the mod to the workshop.
Moving the files to another location is optional. I never move the files until I’m done creating the mod because you can use the Dummy Mod to play test your mod and make sure all the songs are working because it’s still detected as an uploaded workshop mod. Just note that if you move it somewhere else, you will not be able to play test your mod.

Edit the settings file with notepad or any text editor and name the mod based on what you want it to be. Change the category to whatever you think fits your music mod, but normally it should be listed as Cosmetic. When we upload the mod later, you can change the “Private” to “Public”. 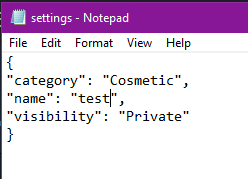 Repaking is just the opposite of unpaking, meaning, the files you edited will be converted into a res.pak so that you can upload it to the workshop.

Same idea as unpaking with cmd, but this time you need to start off from the Dead Cells directory instead of just the drive itself.

1.) There’s probably an easier way to do this that I don’t know of (comment if there’s an easier alternative way to do this), but for now, find Command Prompt on windows search again, but this time right click it and go to Open File Location

2.) Copy paste the Command Prompt because we are gonna edit its properties.

3.) Go to “Shortcut” in the Command Prompt Copy’s properties and find “Start in” 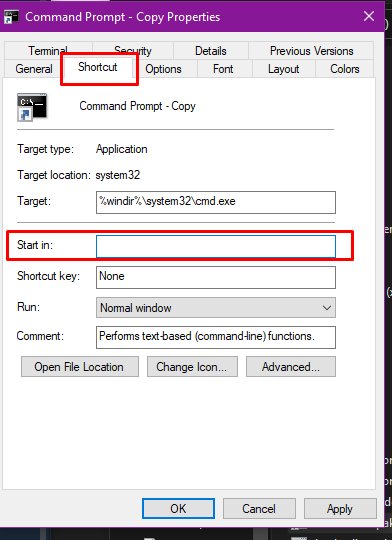 4.) Now, copy paste your Dead Cells directory into it, but this time, add “\ModTools” to the end of it. This is so Command Prompt can access the repakker tool inside it.
Example: “D:\Program Files (x86)\Steam\steamapps\common\Dead Cells\ModTools” 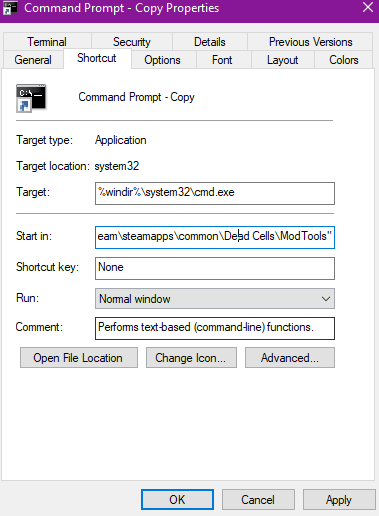 6.) Open the Command Prompt Copy you just edited and it should start up from your ModTools folder.
Example:

8.) If done correctly, this line should show up again

Now, navigate to the Dummy Mod directory or whatever folder you chose the repak to extract at and there should now be a res.pak

Depending on how much songs you modded in, the res.pak size should be at least between 300 MB to 1.5 GB
The image shows 84 KB on the res.pak because it’s just an example.

Before uploading your mod to the workshop, there are some minor things you have to do to make your mod work.

Before uploading to the workshop, you have to customize the settings and a preview image of your mod.

Go back to where ever you put the folder with the settings.json and res.pak.

You can change the settings.json name, category, and visibility if you haven’t yet.
Set the name to whatever you want, category to cosmetic, and visibility to public.
Note: The name of your mod is permanent. You can change its visible name on the workshop when you upload it, but its internal name is permanent. For example, if someone wants to select your mod to use in the game, it’ll appear as what you named it in the settings.json, not the workshop title.

Save and close that once done.

Now you need to upload a preview image as the cover art of your mod.

You can use whatever picture or drawing program you want, but there are some specifications for this image.

Once again, like unpaking and repaking, we need to use Command Prompt again, but it won’t be as confusing as the others.

However, before doing that, if the folder containing your res.pak, settings, and preview image are still in the Dummy Mod workshop directory, place them somewhere else now because it’ll conflict with the Dummy Mod itself if you try to upload your mod to the workshop from there

1.) Make another copy of Command Prompt and go to its properties, shortcut, and “start in” again. 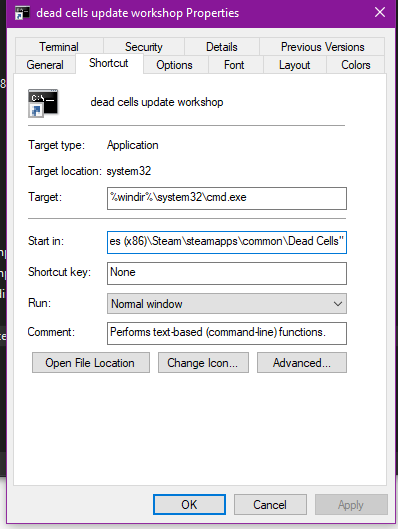 4.) Open it and make sure it starts off with your Dead Cells directory.

(Make sure you have Dead Cells installed… but why wouldn’t you)
5.) Now put in the code: deadcells.exe –workshop

6.) You’ll probably hear a ding noise and then Steam will give you a popup that looks like this: 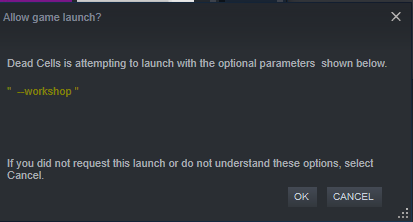 7.) Click Ok and a new command prompt will open: 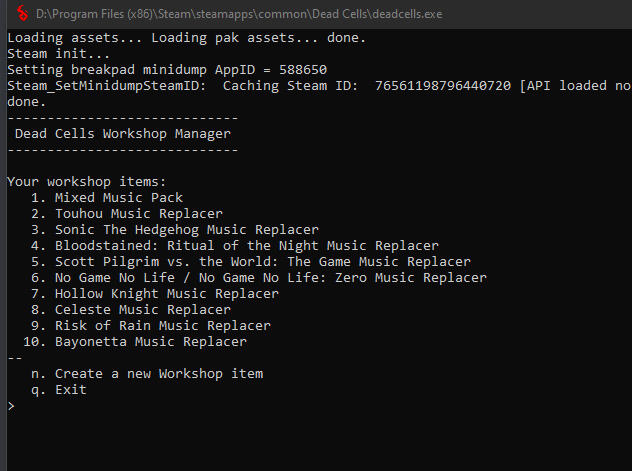 This is where you’ll upload your mod.

8.) Type n then press enter. It’ll ask you if you agree to the workshop terms of service and then ask you to input the “Local path”
The local path is where you have your settings, res.pak, and preview image stored.

9.) Copy paste the directory of that folder into the prompt and press enter.

10.) It will confirm with you of the mod you’re about to upload, if it’s correct then enter yes and if it’s wrong then enter no.

11.) It’ll begin uploading the mod to the workshop which you’ll eventually find on your profile.

That’s all, your mod is uploaded and now anyone can download it.
At first, it might say your mod is on private for the first couple of minutes once you upload it. It’ll eventually make itself go public because it’s still processing the mod to the workshop.

If you ever want to update your mod, you’ll have to edit the files wherever you put your (Output Directory) and then repak the files again. Then just make your way back to the workshop command prompt of Dead Cells and select the mod you want to update. It’ll ask you for the local path again and just do as it says.
Workshop Mod Description
You might want to teach people that want to use your mod what the contents of your mod consist of and how to use it.

This is a format for the description of your mod. You don’t have to use this format, but I personally use it for all my music mods:

How To Enable Music Mods:

1. subscribe to this mod so it can download
2. in options > sounds > alternative soundtracks, make sure your OST is set to default
3. go to options > gameplay > then scroll down until you see “Enable Mod Interface” then enable that
4. start a new normal mode run (NOT NORMAL MODE (CONTINUE) ) and then the mod interface will appear
5. enable this mod by finding its name ([REPLACE TEXT HERE WITH YOUR MOD NAME])
6. have fun

SPOILERS FOR THE TRUE ENDING:
Astrolab,
Observatory
(mega spoiler) The Collector,
Defeated Him,
Killed Him.
By Kreous