Democracy 4: How to Avoid Tax Evasion

Evade the evasion! Simple guide on how to avoid tax evasion.

What is Tax Evasion?

Tax evasion is a negative situation which causes you to gain less money from taxes.

Tax evasion is increased by the following policies:

* – these taxes do not increase tax evasion, but are affected by it 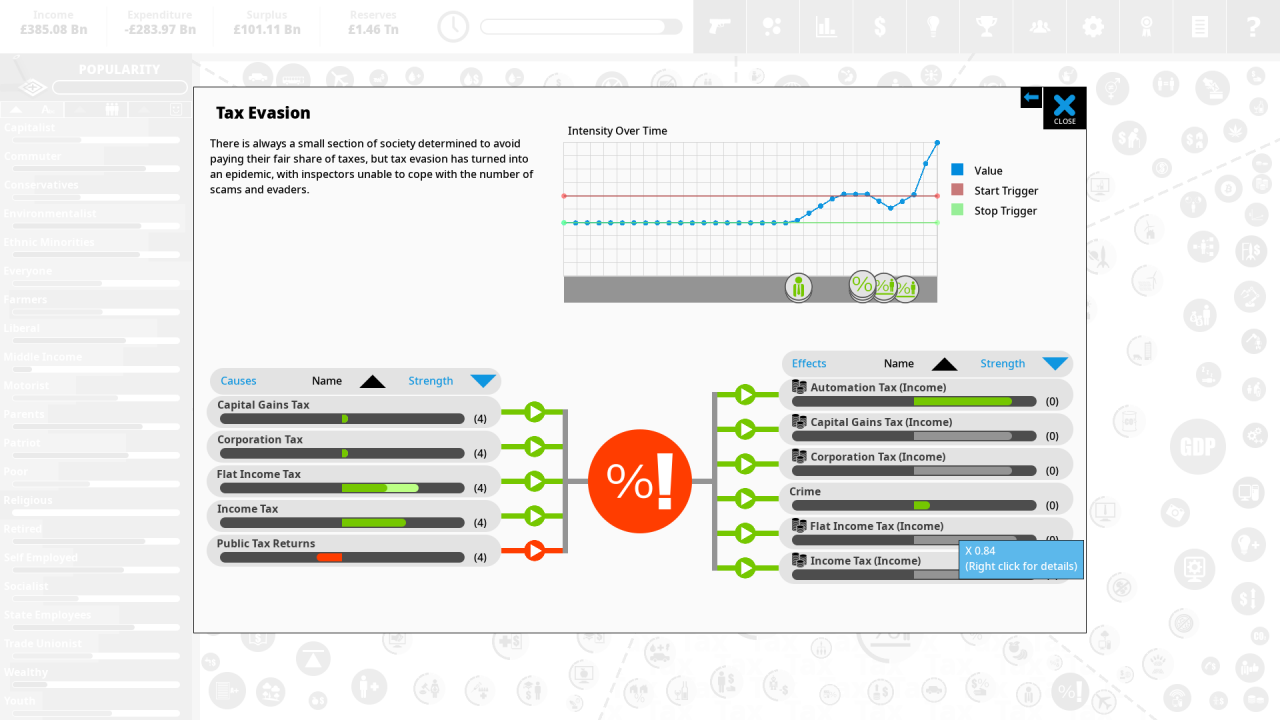 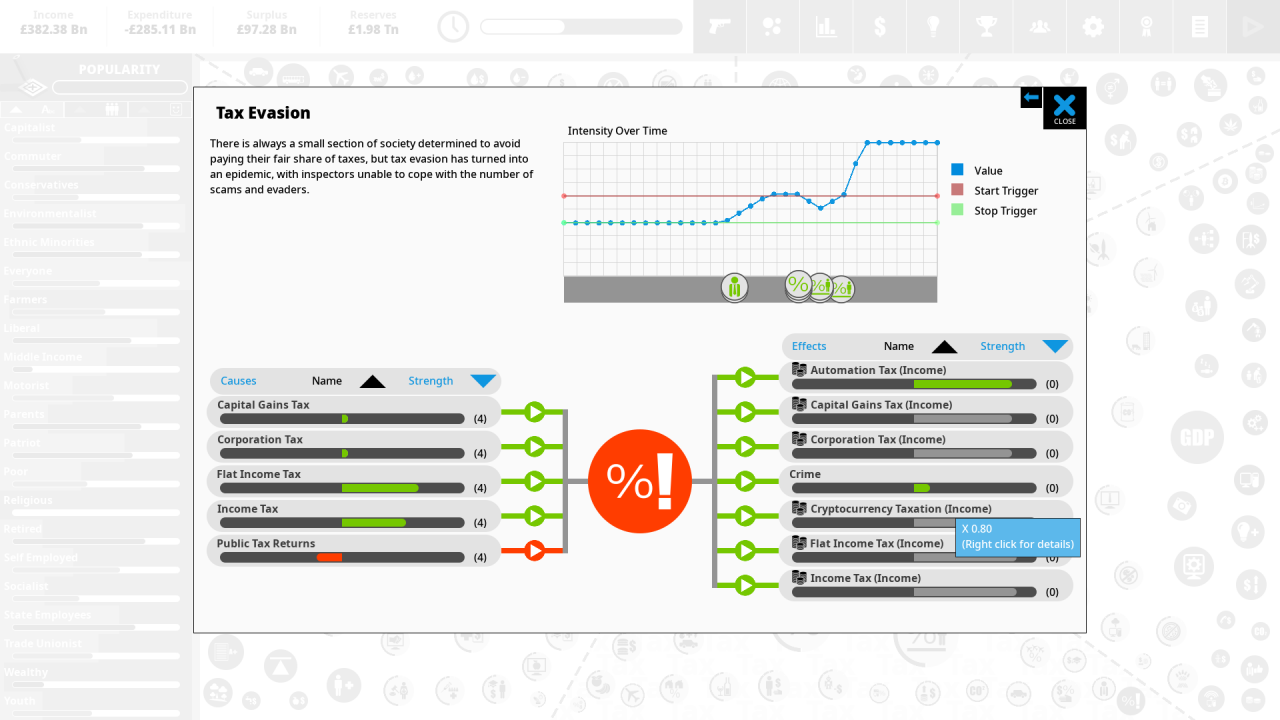 At maximum intensity, tax evasion reduces “Income Tax” and “Flat Income Tax” by “just” 16%, while the rest of taxes are reduced by 20%, and also increases crime by 13%.

What does it mean? Well, you’re earning roughly only 80-84% of what you should be with current tax rates. Maybe it’s enough for you. But, you’re only earing 80-84% of the money, AND get increased crime, all the while suffering 100% of negative effects of taxes, for example GDP reduction, lower equality, voters happiness etc.

Wouldn’t it be better to not get tax evasion, not get increased crime, lower taxes so that you get what you’d get with tax evasion, and not worry about all these negative effects(that much)?

Like all situations, Tax Evasion has a Start Trigger and a Stop Trigger. In case of tax evasion, these are set these way:

And like all situations, you can’t access tax evasion screen until it either becomes a problem, or a minister warns you that it can become a problem in quarterly report.

Tax evasion also appears to have a “base” intensity of 30%, which is later modified by policies that affect it. 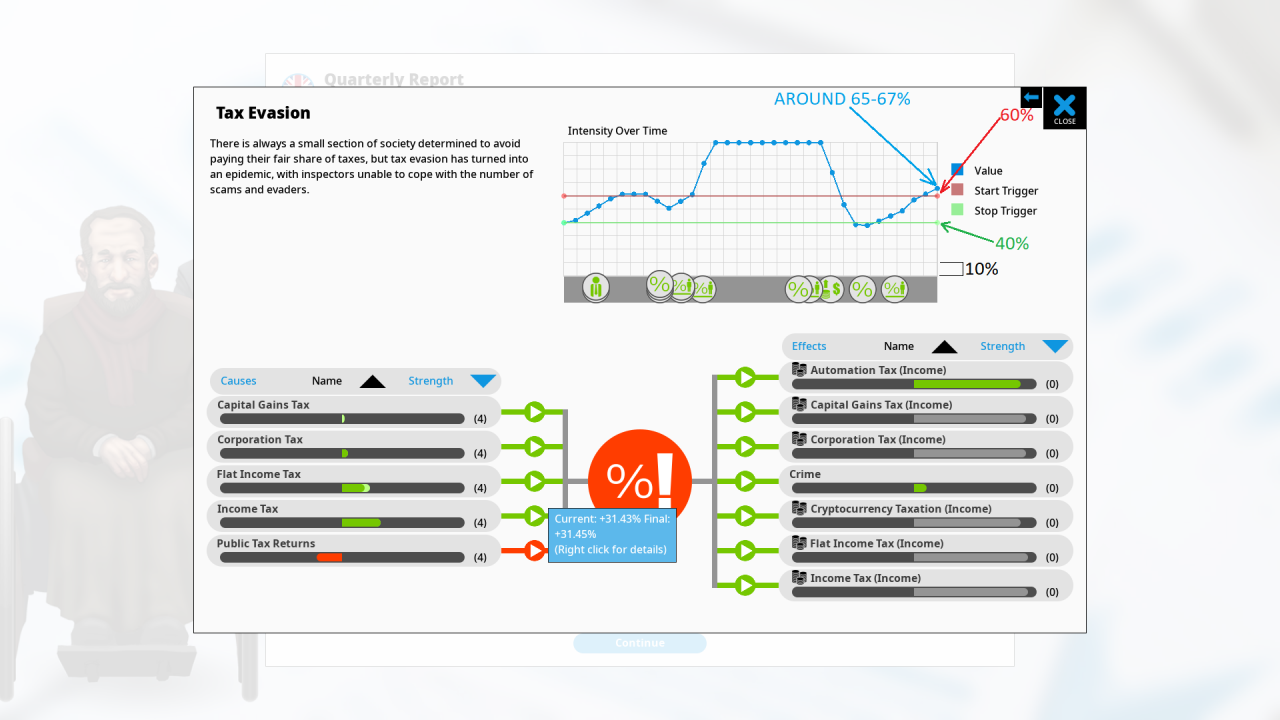 In the above example, my tax evasion is at around 65-67% (you can determine exact value by adding intensities from all the causes, just to remember to also add 30% “base”) intensity, so it’s something like 5-7% above start trigger, and 25-27% above stop trigger.

My main cause of tax evasion is normal income tax – it’s currently causing 31,43% intensity. To STOP tax evasion by just changing that one policy, I’d need to lower this policy effect on tax evasion by 25-27% – to be safe I’ll go with 27%, as presented by screenshot below. 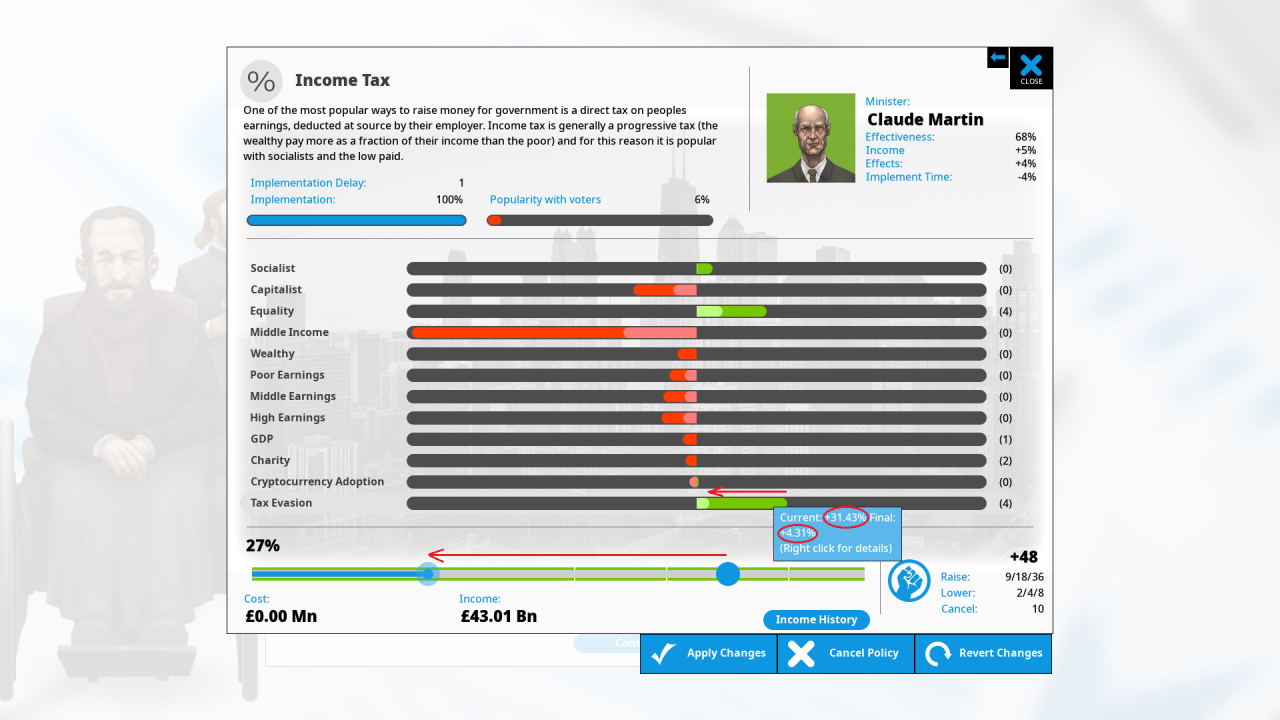 BUT. Another thing worth considering right now. After stopping tax evasion, I will be able to increase my taxes until tax evasion intensity would become even 59,99% without triggering it again. But since I won’t be able to see the effects on tax intensity in policy if it’s no longer a problem, I’ll check now, at what tax rate, Income Tax would cause around 24% tax evasion (7% less than it currently does): 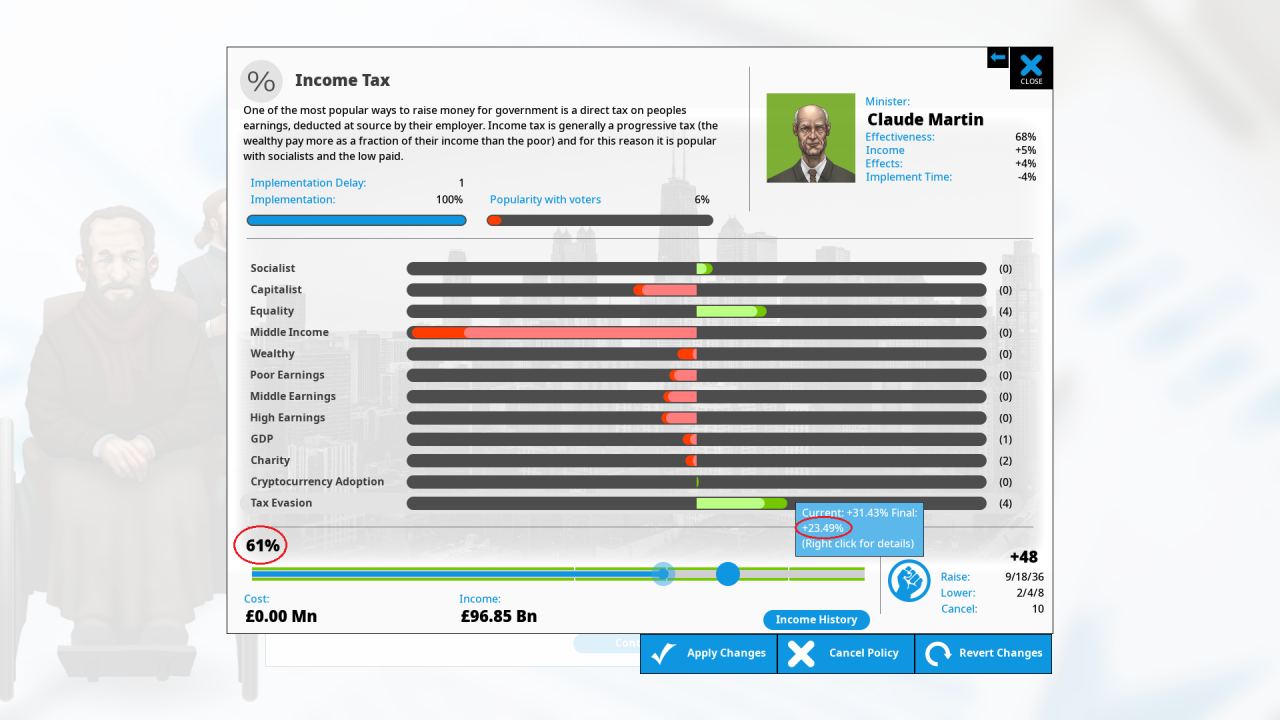 Ok let’s switch my tax rate to 27% to stop tax evasion, and wait a few turns.

Oh. Tax evasion didn’t stop. Why? Because I didn’t consider the fact that tax evasion was still increasing from recently increased Flat Income Tax. Black arrow points to the point in which I lowered Income Tax, but the next turn tax evasion still increased to the point where red arrow points, making my calculations wrong. It seems like I’m at 42-44% intensity, so I’ll lower my flat income tax so its effect on tax intensity will be decreased by 4%, and wait a few turns again.

You need to remember, that a lot of effects in Democracy 4 take time to build up. 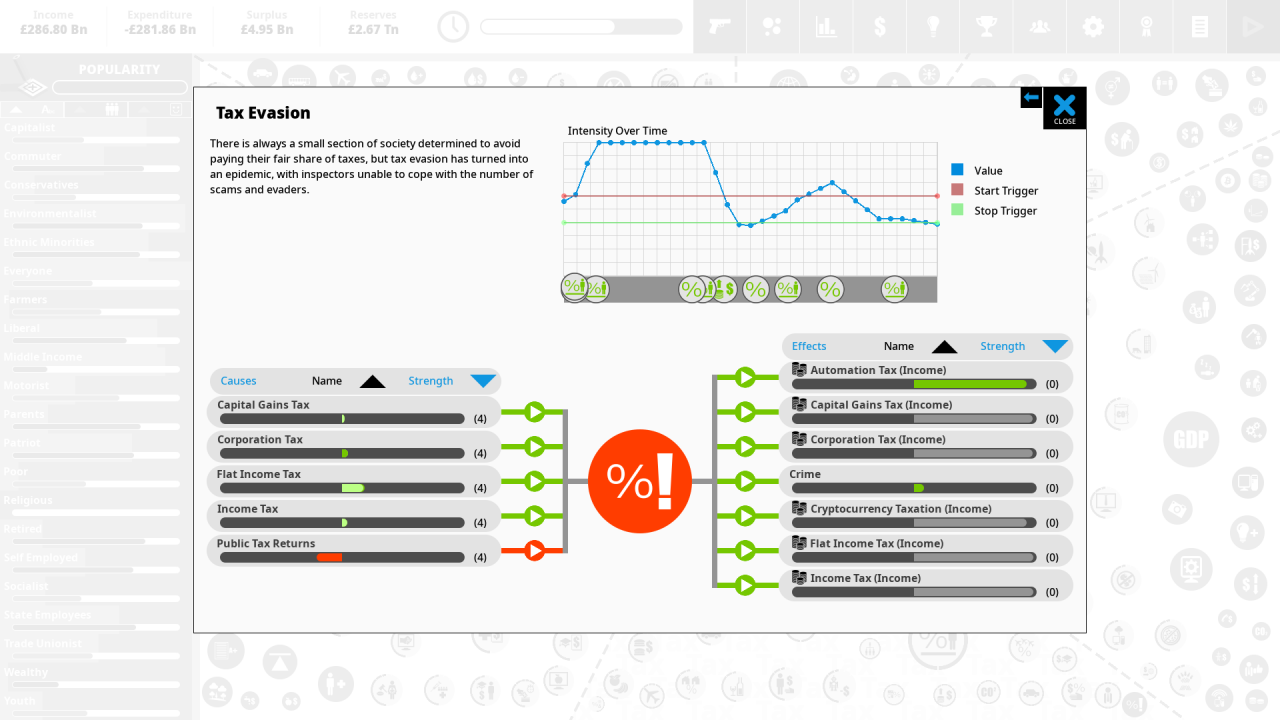 Ok, intensity is below stop trigger, so the situation should stop next turn.
Let’s increase my income tax to 61%, as calculated before. As a side benefit of noticing I’m already below stop trigger, I will still be able to see the tax effect on tax evasion! 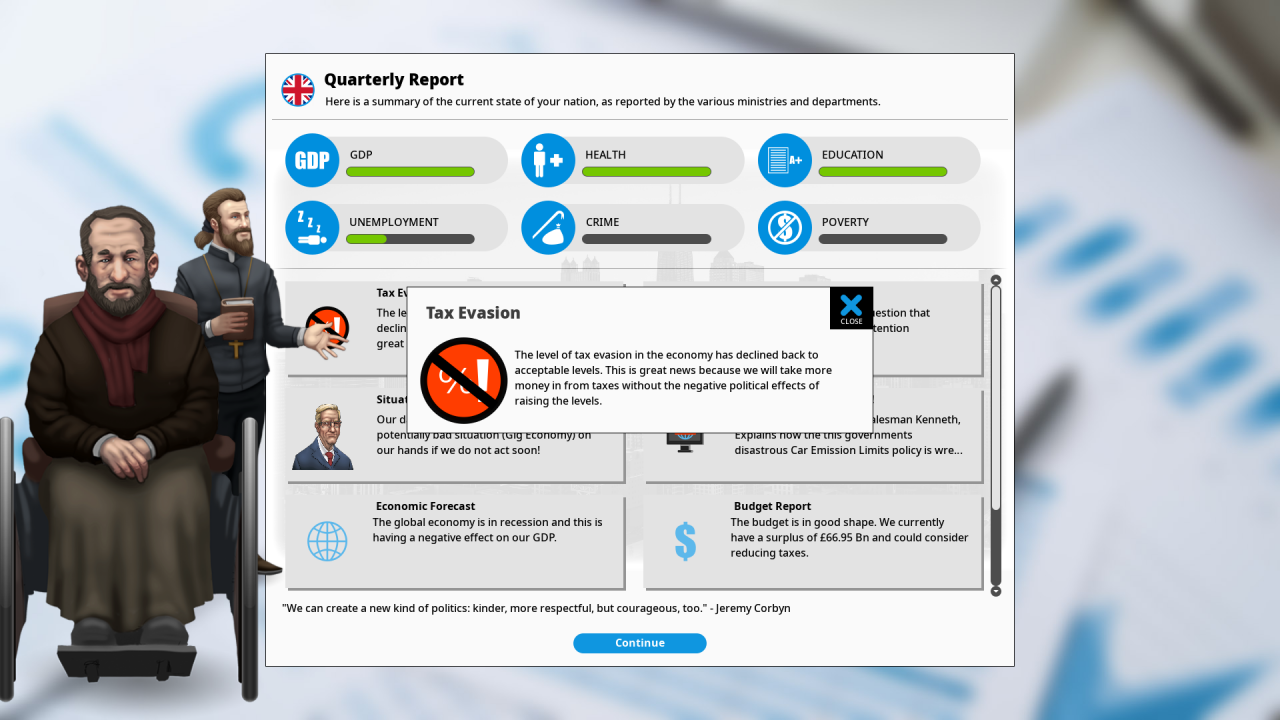 As expected, tax evasion ceased next turn, and with Income Tax at 61%, my tax evasion intensity should stop just below 60%, never triggering the situation! I just need to remember not to increase any of the other taxes that increase tax evasion.
Luckily, there are also taxes that DO NOT increase it… 🙂 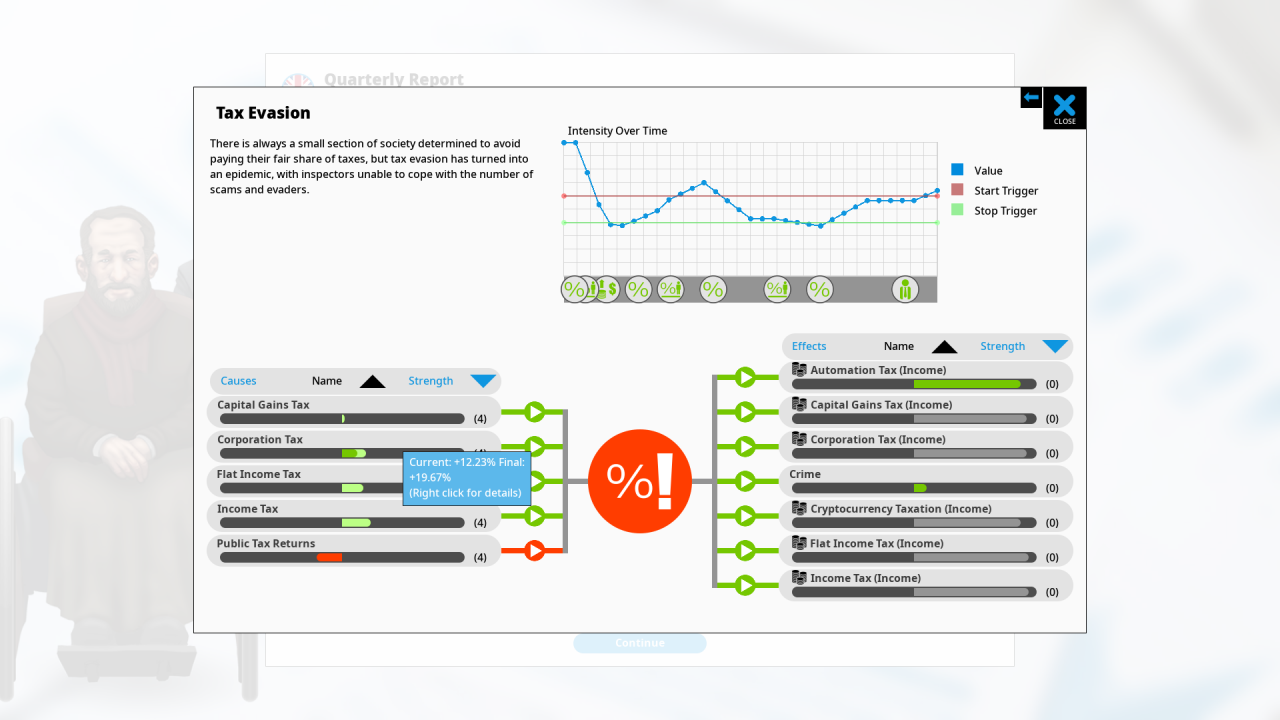 And, to see how well I did, after some more turns I increased corp tax to trigger tax evasion. Seems like before that it was at around 57-58%, so I could have increased my taxes a bit more, but it’s better to have a slight margin for error than having to repeat the process or reload a save.

Here’s a spreadsheet I made based on data from my game as Great Britain, which shows how much tax evasion is caused by taxes at what levels, how much money they give, some ratios etc.