This guide contains spoilers about secrets and hidden achievements.

Obelisk allows you to ascend dice, but it is also used to trigger the secret ending of the game.
You will know you have unlocked it when the obelisk buries itself into the ground after the 3 dice lightened. 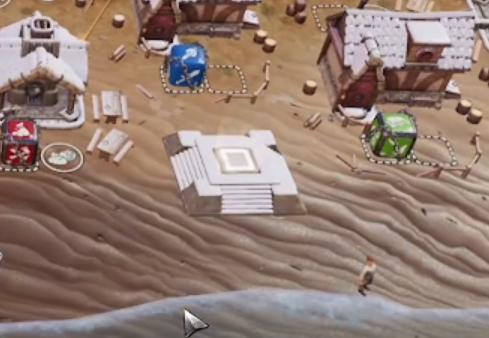 Corresponding event will then take place after you destroy the enemy harbour.

The clues to find out how to activate the secret ending are provided by pendants with symbols that you can find in ruins when exploring until the end with a high-level Explore die. Or when you maintain very good relationships/interactions with an Encampment. 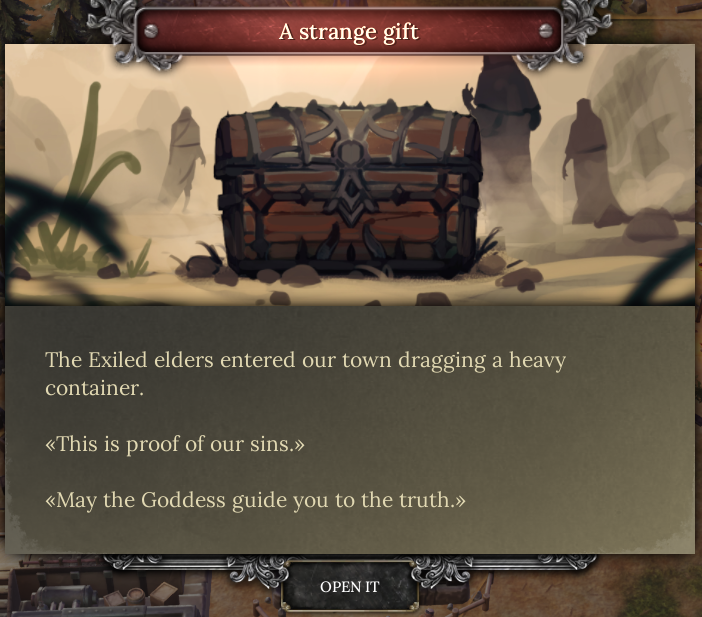 Each die in the obelisk can have 4 different positions so there is a total of 64 possible combinations, the correct one will change every game. So try to keep track of which clue you found during a game.
If you didn’t find all the symbol clues it is still possible to activate the obelisk by trying all the matching combinations (4 of them if you found 2 symbols, 16 if you found only one). 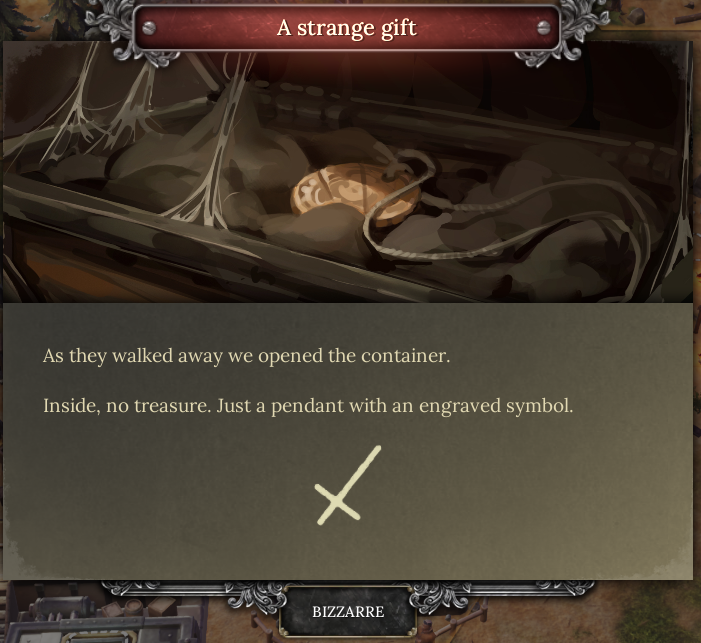 Just put the dices one by one, you can use 3 different ones. 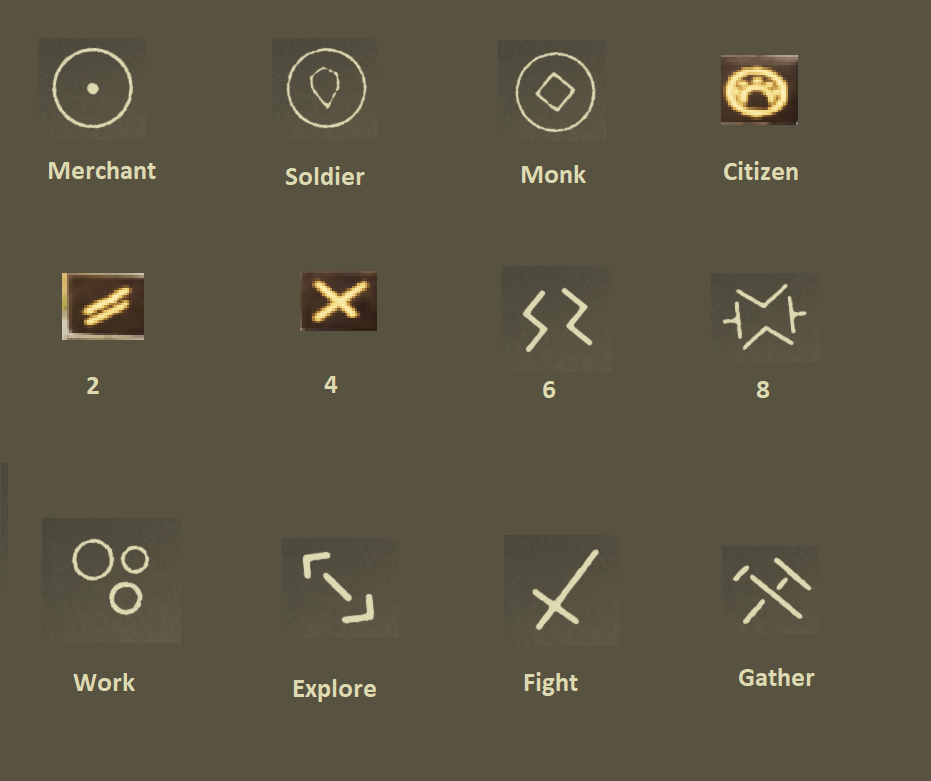 Now you just have to complete the map as usual by destroying enemy harbour to reach the secret ending.

You will reach that one after activating the obelisk and destroying the enemy harbour afterwards.

Beware, if you are not prepared you will most likely be defeated and lose all your buildings as well. 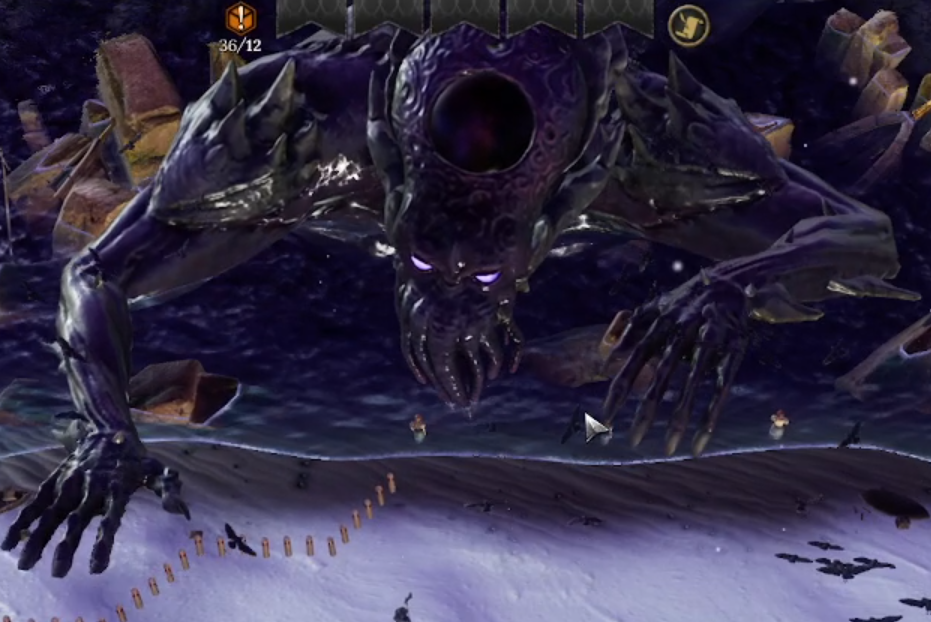 This scary looking creature will slowly move across the map destroying all your buildings in the process, if you cannot stop it you will lose.

At the beginning of the fight all the classes happiness is removed so you don’t have to worry about that.

During the fight, the boss will perform various actions that can impact your dice.
It can corrupt them, freeze them and perform an action that will set all your dice durability to 3 (including the ones stored in cookhouses)

The head displays some symbols which correspond to the combination you must have in your pool. For instance in above picture you need 3 Work faces and 2 Explore faces. Similar to wager ability, it’s not enough to have the combination in your pool, you need to have just rolled a die for the effect to take place.

If you are not quick enough the boss will perform an attack and change the combination you must perform.

If you successfully performed the combination then you can attack the boss and have to perform enough damage. 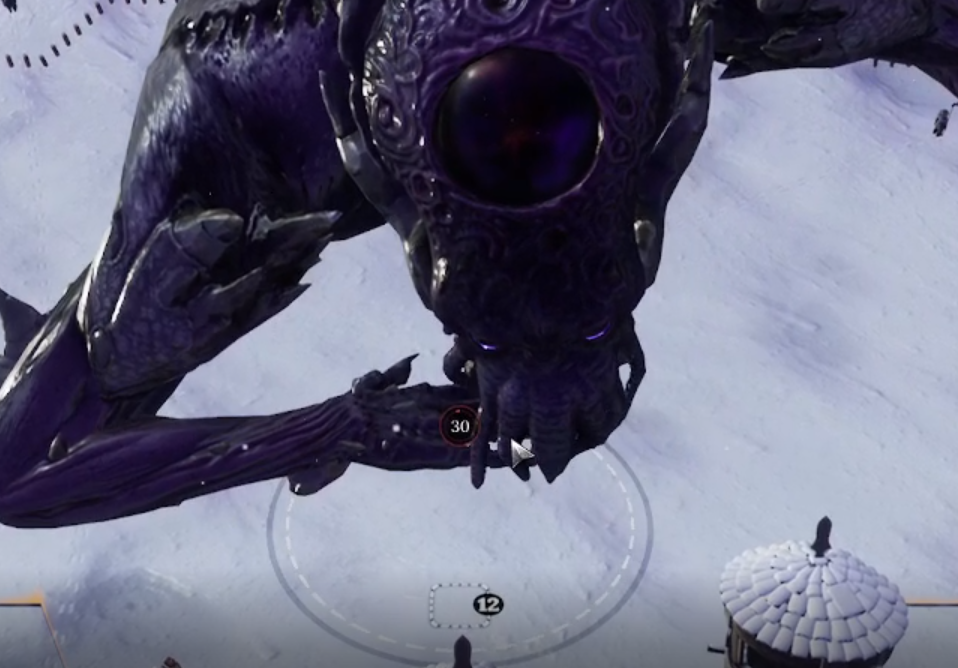 You can use any die face for that, it does not have to be a Fight or Raid face.
Once you put the required amount of power, the boss will perform an attack and display a more complex combination.

How to prepare for the fight

My preferred method is as follow, it is relatively long to build-up though. At that point you should have easy access to infinite resources thanks to not depleting wood/iron/stone deposits and Mandatory cutting + Mandatory mining policies. Also using Mandatory offerings + Domestic trading + Appropriations for additional gold / resources income with 10-15 Merchant districts. The top of your base should be fully secured thanks to 5-7 fully upgraded towers that can inflict at least 10 damage on any incoming attack.
Recommended policies (with the time it takes to prepare this way you will most likely have almost all of them anyway):
Fur coats
Mandatory cutting
Mandatory mining
Education standards
Sentinels (not really necessary but can reduce the amount of towers needed to defend)
Military dictatorship
Domestic trading
Appropriations
Liturgies
Mandatory offerings
Protective medicine
Your knowledge technology tree should be fully researched, at least for the stuff that’s actually useful.

Once you have that setup you can play at max speed, put 2 forges, 2 enhancement chambers, 2 houses, 2 cookhouses close together, all of them with maximum efficiency and in peasant districts to avoid freezing and use them to mass forge dice:
Bring 12 brand new peasant dice, use 8 of them to create 4 constructed dice with 1 trait. If you get any with Fortitude, save that die for later. Otherwise merge each of the remaining 4 basic dice with a constructed dice. You would end up with 4 dice in your pool, save any that has fortitude for later use. Otherwise start creating 12 brand new dice in the House and get rid of the 4 constructed dice (turning them into Citizens and then back to Peasants with the Hospice for instance).
Just be careful of happiness when you start applying that process to soldier dice, but for other classes you have nothing to worry about thanks to Military dictatorship policy.

At the bottom of the map (so that they are destroyed last), put 20-30 cookhouses. 2 Temples, 2 Taverns, 2 Monument. This is to store the dice you don’t use yet. You can also put the buildings to convert dices into different classes there so that you can create new dice during the fight if something went very wrong.

Start the fight with the 12 peasant dice with fortitude in your pool, after hitting the boss twice swap 4 of them with the merchant / citizen / monk /soldier die.
The last combination always requires 2 different faces from these 4 so it’s easier to just have the 4 dice in the pool anyway.
If you get hit by the attack reducing durability to 3, put one monk die in the monument to fully heal your pool before starting to roll again.

There are 3 secret achievements in this game:

Thanks to Asharai for his great guide, all credit to his effort. you can also read the original guide from Steam Community. enjoy the game.