contrary to popular belief, wearing a Tam o’ Shanter during Summer does not make you overheat faster.

Usually I have people yell at me for wearing a Tam during summer because I am prone to overheating faster that way. To which I have to inform them that’s not how temperature works in this game.

Which is a fair warning to this guide: everything stated here has only been tested in Don’t Starve Together and only by me (As I never see anyone else mention about Temperature other than “Wear this to stay warm/cool”). I have no idea whether or not it is the same for the solo gameplay of Don’t Starve (but feel free to verify for me if you can).

Another warning: Take this guide with a grain of salt. While I have tested temperature a lot, there could be some parts I miss out on that other people might know concerning this topic or discover upon reading this topic and testing among themselves.

Shoutouts to the creators of Combined Status to allow me to see how fast/slow our character temperature changes while using the in-game’s temperature scaling.

If you use mods or have been to worlds that use them, you might have seen the word “Insulation” or “Summer” with some random number beside it among some pieces of clothing.

The math behind I/S

So now you have 480 Heat Protection. What does that exactly mean?
Now you can traverse outside to Hot climates for a really long time without needing to go near a Cold source to cool down before overheating. Sounds great right but what does the 480 mean?

DST has a hidden function for I/S, which is a division by 30.
Thus, taking your 480 Heat Protection, dividing it by 30, granting you a total of 16.
Mystery solved. But now what does the 16 mean.

This 16 is added towards the factor of you being out of the cold source.
All characters have an I/S of 30 (With the exception of Woodie due to his beard providing him 45 Insulation, granting him a total of 75 Insulation at all times). When divided, you have a total of 1. This means that your character can gain (or lose) temperature at a rate of 1 Klei Unit (referred to as KU) per second until it matches with the curent World Temperature.
But now, because of you currently having a combined total of 480 Heat Protection, you now have 17 seconds (+1 from your character, +8 from a Floral Shirt, +8 from an Eyebrella Hat) before the game decides you should lose 1 KU of temperature.

The Misconception and World Temperature

“Wow, now I can be out of a Cold fire for an X amount of time with Y Heat Protection. But does that mean I have to take it off if I actually want to warm up during other seasons?”

Yes and No
There is an odd annoyance factor when the world transitions to different seasons.
(Which could also be considered a bug to some people.)

“But if its at 35, would I/S both activate or deactivate?”
Only one is active at all times because there are floating numbers that Combined Status does not provide on World Temp, it could be 35.2, making all Insulation clothing turn On. Or it could be 35.9, making all Heat Protection clothes On while turning Insulaion Off.
(Or maybe its like a 34.7 and a 35.3, but still displays as 35 on both ends. I can’t exactly tell with the extent of Combined Status without datamining)

That being said, if the world just happened to have transition between Summer to Autumn, all Heat Protection items still have effect, which will prevent you from heating up if you are currently wearing them. But because this 35 KU degree factor only ever happens between Autumn and Spring (unless your world is special), its highly irrelevant when concerning Overheating/Freezing

Now that you (probably) have a galaxy brain knowledge of Weather in DST, feel free to impress your friends until they see this guide or something.
As a bonus, here is a list of all I/S clothing as well as a few special instances.
Sorted by most I/S, whether its Insulation or Heat Protection and alphabetically. 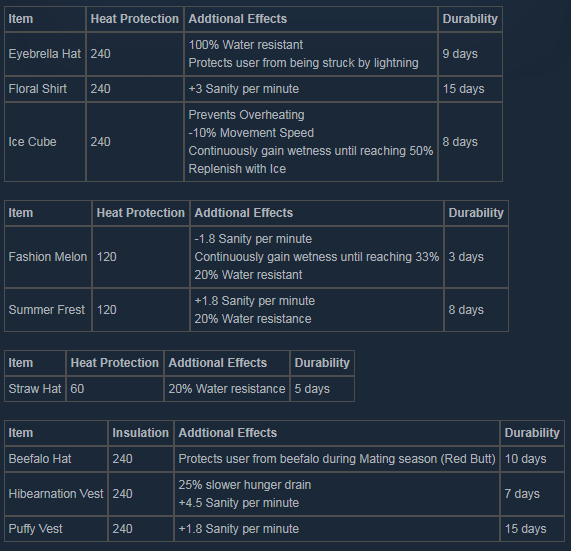 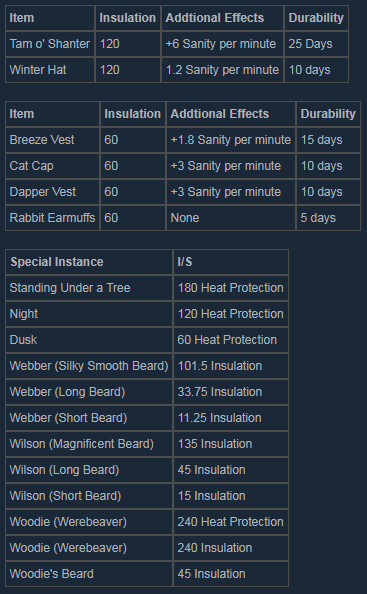 This guide was written by Sin

Here is a simple guide on how to get the cheat codes for Dragon Only Mode. hope this cheat codes will help you.   Codes working...

Bermuda - Lost Survival is an open-world survival craft game that had been early access in 2017.  now Early access is over and the game is...

Escape until friday: How to Get All Achievements

Hello! In the game, some achievements are very difficult, but don't worry, I'll tell you everything :)   Achievement #...

For those who prefer a generic keyboard + mouse combination / not to use a gamepad.   Intro Just wanted to share what I've used...