Here is a simple guide on how to play the Arbalest build with every class.

Basics of RTS
Like in every real time strategy game its important to know beforehand what you want to do and how you best achieve it. If you spend ressources on things that have little or no use, or try to find out how to make steel in a running game you lose a lot potential. So in the following chapters i give you a detailed idea on what your plan could be for every class with a basic strategy for beginners.
Dwarfheim is a new kind of game
And here is the first problem, you are only 1 of 3 players who might not know your plan. If you have the opportunity to play with even 1 friend or team up with someone you played with you have a great chance of winning in the current state of the game. I played as a random against a team of 3 and while they didnt use the most profound strategy and i consider myself not a bad gamer (sc2 diamond league) i lost to them all the 5 games in a row i played against them. I deliberately didnt told my teammates my plan so that definitely will increase your winning chance. But always remember to stay positive and constructive. Instead of asking someone what the hell he is doing, maybe give them a simple hint how they can improve. That is also the reason why you might want to read about the other classes even if you dont play them. Also dont forget to upgrade your heroes level in the town hall from time to time, its a shared ressource with others so let more fighting heavy heroes upgrade first.
Miner – wörk wörk
Mining is the most important part of the economy as its basically on the miner to determine how much of an army the warrior can build. Keep in mind that the warrior is heavily dependent on your ores and that in the first minutes you draw valuable food (and wood) from the builder.

Your goal is to collect as much gold and iron as possible evening them out on the ressource bar so they are roughly the same ratio. Also keep the silver at around 100 units. Thats basically all you do for the economy. You start out with one production lane and add more of them as the game progresses.

A production lane consist at least of a warehouse and a rail. If you put the raw ores on the rail you get a bad output. Thats 35 ore units per wall tile. If you add the rock crusher in between it doubles to 70 and if you add a forge between the rock crusher it goes up to 105. Every step takes longer but i think in the end its worth it as you get more out of your wall tiles. Keep in mind though that you need an ore sorter between forge and rock crusher so the stones dont get burned in the forge and slow down the process to almost a halt. So configure the sorter to throw stones on a rail of your choice leading to the warehouse. If you built something wrong you can select it and press x to delete it, you get its ressources back. 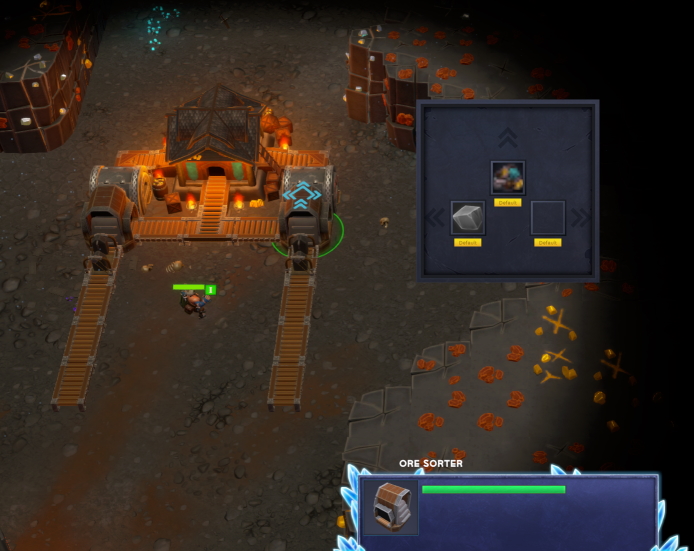 If you feel insecure how to place your buildings and to find ore play Nubbs because he has greater vision, as soon as you got the hang of it change to Aldruna, with additional damage to buildings and bleeding damage to troops this hero gives you the capability to harass the enemy miner, which is a part of the game most of the miners neglect: the war for the underworld. With Aldruna you can easily beat an enemy Nubbs, get a hold of the capture points in the middle of the map and burn fast through enemy production buildings. If you are lucky and the enemies teammates are slow you can do a lot of damage until they build towers which diverts their ressources and/or attention. You also see an advancing army faster, if you feel they are rolling right into your production dont be afraid to tell your team as they might have their eyes on the overworld.

Builder – a king in disguise
The builder is providing basic ressources and is the connector between warrior and miner. Food is mainly used by the warrior to train troops, wood is used by the miner to expand his production.

Because all you economically do is gathering food and wood which is a simple task, you have time to take a step back and look what your team is doing. While the warrior can build barracks and houses he probably is busy fighting, so support him and make sure the population never reaches its cap and provide a barracks as soon as there is a good amount of iron and gold available. Start with 2-3 farms (including your hero) and build up wood. Leave only 50 food for the miner to spawn a miner and enough wood so he can start his production.

As for the hero you can either choose Reina with an area of effect attack and fast build times or Samurtan with healing aura and a lot of tanking ability. I prefer Samurtan as you can help out the warrior big times, while not fighting you heal his troops and when fighting you throw yourself in as a meat shield. Every hit you take is a unit saved. When the miner gets into trouble you can also help him so take a look underground from time to time. You can also clear small monster camps with your hero to get some additional ressources.

But for both heroes goes and i cant emphasize this enough: a smart placement of a stone tower can turn the whole tide of battle. You are the only class that can build the stone tower which especially in the early and mid game is a heavily feared defense. I saw so many builders not building a single stone tower, the warrior desperately trying to use wood towers which soon lose value in the mid game. You have a lot of opportunities, you can protect the miner by getting a stone tower, you can protect the capture points underground and on the overworld and if you want to gamble place one near the enemy or just out of their sight. With the help of a good warrior a stone tower near the enemy miner can ensure a successful and constant destruction of their mining. Experiment with it, its what makes the builder a builder in my eyes. Also a double stone tower is quite strong and pretty much ensures the warrior the defense of a specific area.

Warrior – to fight or not to fight
This class takes the support of the other two classes and wins the game. Food is needed for your teammates to build up their workers early on, gold and iron is all yours with the exception for the miner using 20 iron when building a new forge.

The only way to provide ressources is killing monsters on the map. If you lose more in troops than you get out of them dont clear them, so if you want to clear them use your hero to tank. I think most of the time there are better things to do than clearing those. The main thing being capturing the capture points on the map, they give you buffs and vision to track your enemies movement. While you fight for those with your hero try to deal as much damage to the enemies troops as possible, sometimes even using only your hero you will see later why this might come in handy.

You wait for the miner to start pumping ressources and the builder placing a barracks, you can place it (and the houses) too in case of emergency. Then your time begins to shine, the only unit you build is the arbalest (and also dont forget to research barbed tips in the barracks early on) and whoever gets the biggest ball of arbalest at the end usually wins the game. So choose your fights wisely, kill more enemy troops than you lose while using your hero as tank to steadily increase your ball of arbalest. Your hero respawns for free, your units wont. Let the enemy waste his units on your hero and towers as long as you come out on top at the end even the towers cant stop you. But be wary the enemy has the same tools and might try to bait you into his tower. If you havent yet, a surprise attack on the miner might be devastating for the enemy.

You can either play as Frida who can slow down her enemies so they have a harder time to escape or Raven who is a better tank. If they fight against each other Raven normally wins but Frida can hit and outrun Raven which can prove difficult with the wonky controls but definitely possible, so i usually play her but Raven is a good tank later on to save you units. So choose the one that fits your playstyle.