Welcome to GamePretty. here is a guide for Endless RPG game. All you need to know to begin.

1. Delivery Quests
To get some starting money, and know your world, do some deliveries. At any town you can get a delivery quest. 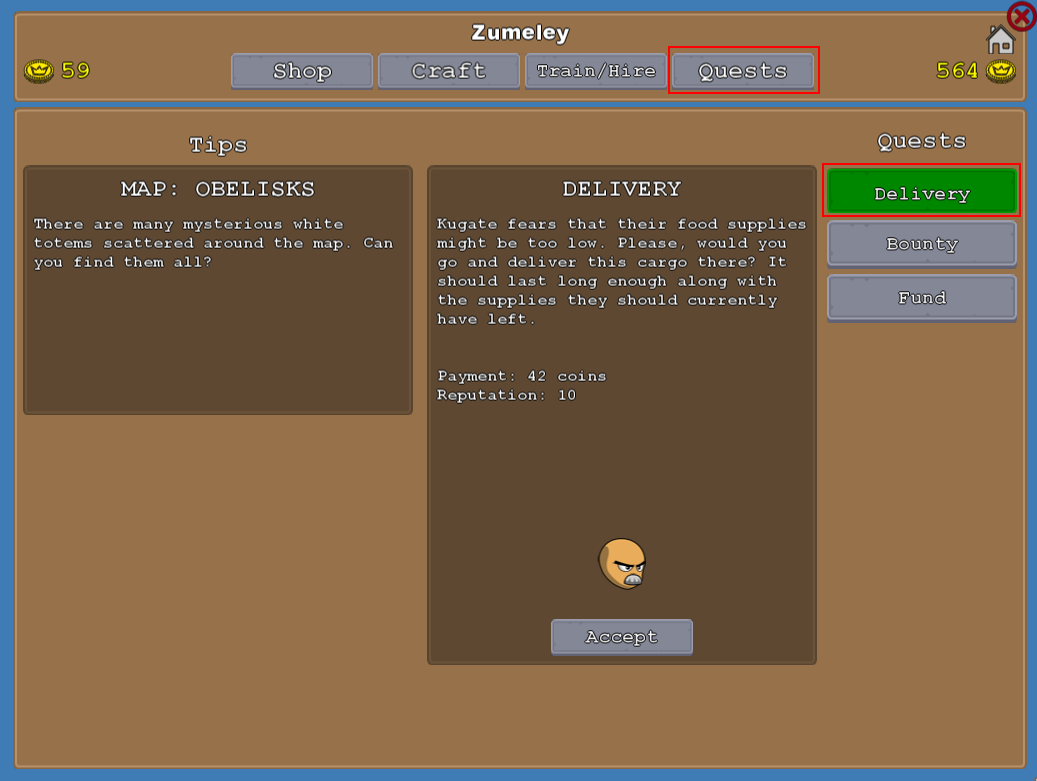 Left click the quest to know where is the town that requested the delivery. 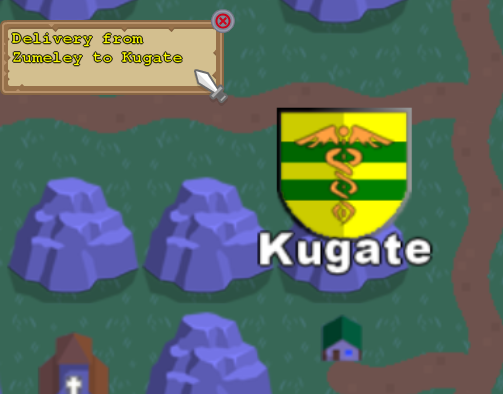 1.1 Do your deliveries
As soon as you get some spare money, buy some goods in a town and sell them on towns that don’t have those goods. I recommend Adamant, Mithril, Gold and Fuchsia Crystals. 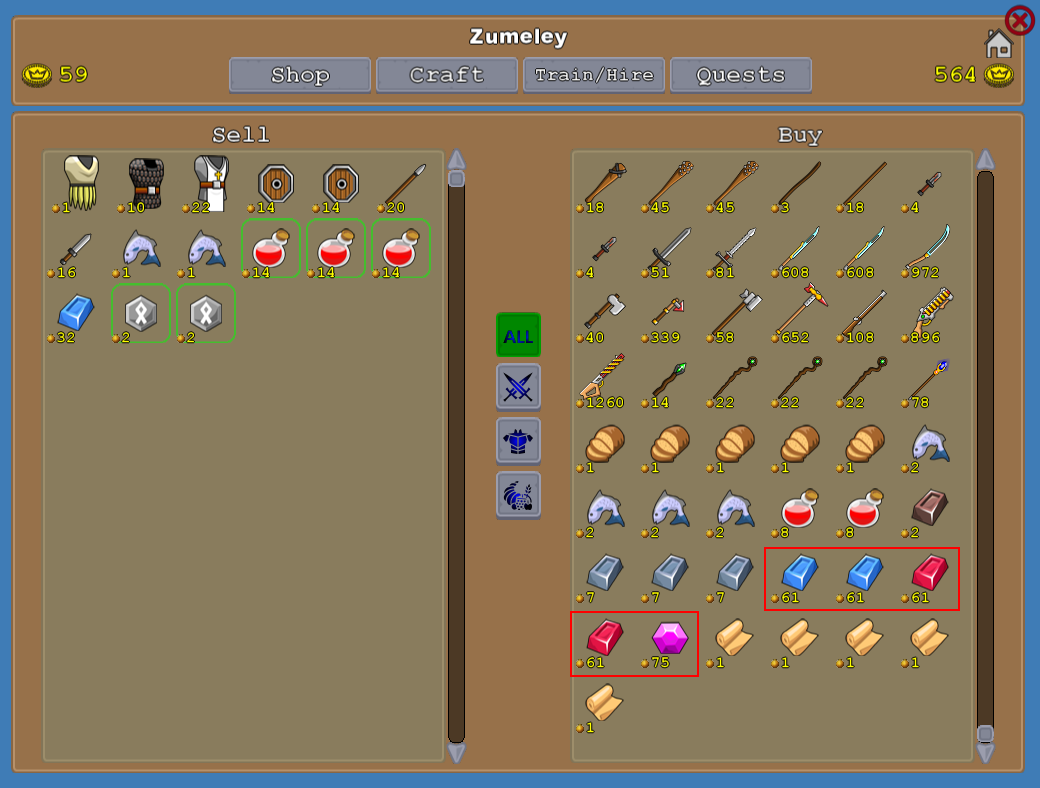 2. Pick your fights
Know your enemy and avoid facing every single battle at the start. Right click the people dressed in black on the map. You will see how many enemies that party have, their class and level. If there are more people than your party, avoid it. If the class level is higher than 3, prepare for a difficult fight. 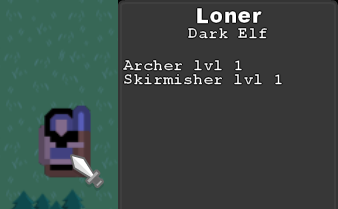 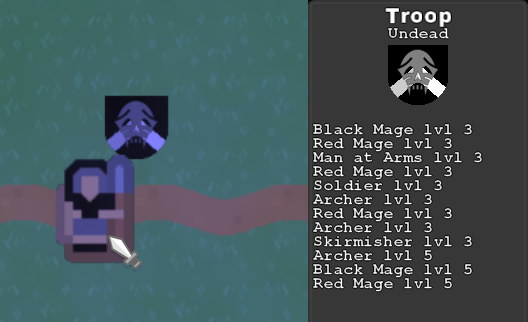 2.1 Weather and Night
Please be mindful that weather and night makes the combat way harder than usual as each condition amounts to a -10% penalty on To Hit. 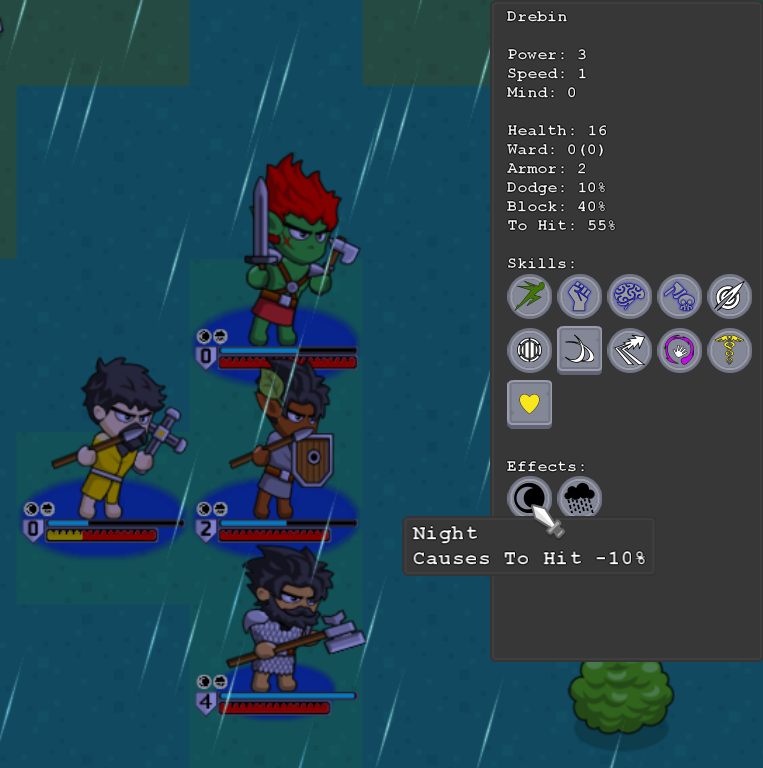 2.2 Flank
Whenever a character is targeted by a melee attack, being hit or not doesn’t matter, she will get a cumulative Flank effect. That effect increases the possibility of that character being hit until it acts again. Use this in your advantage and focus your attacks against an opponent that is too difficult to hit. 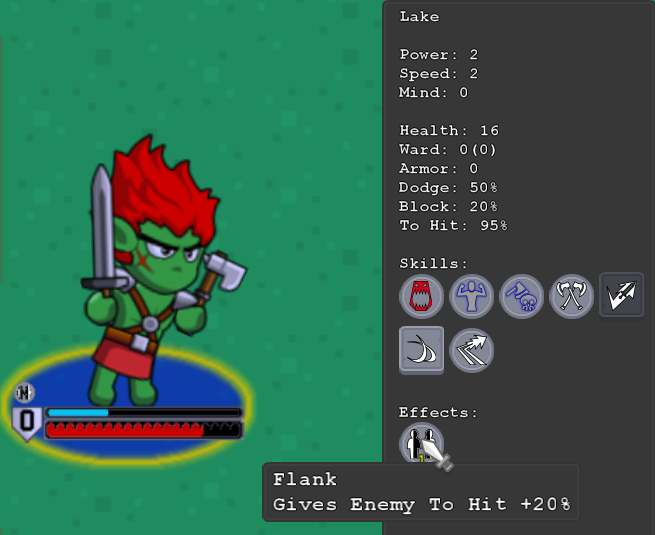 2.3 Recover
After a fight you can camp or eat something to recover your party.
Just hit the ‘C’ key in the world map.

Or eat something on the party screen. Select your character and right click a food item. 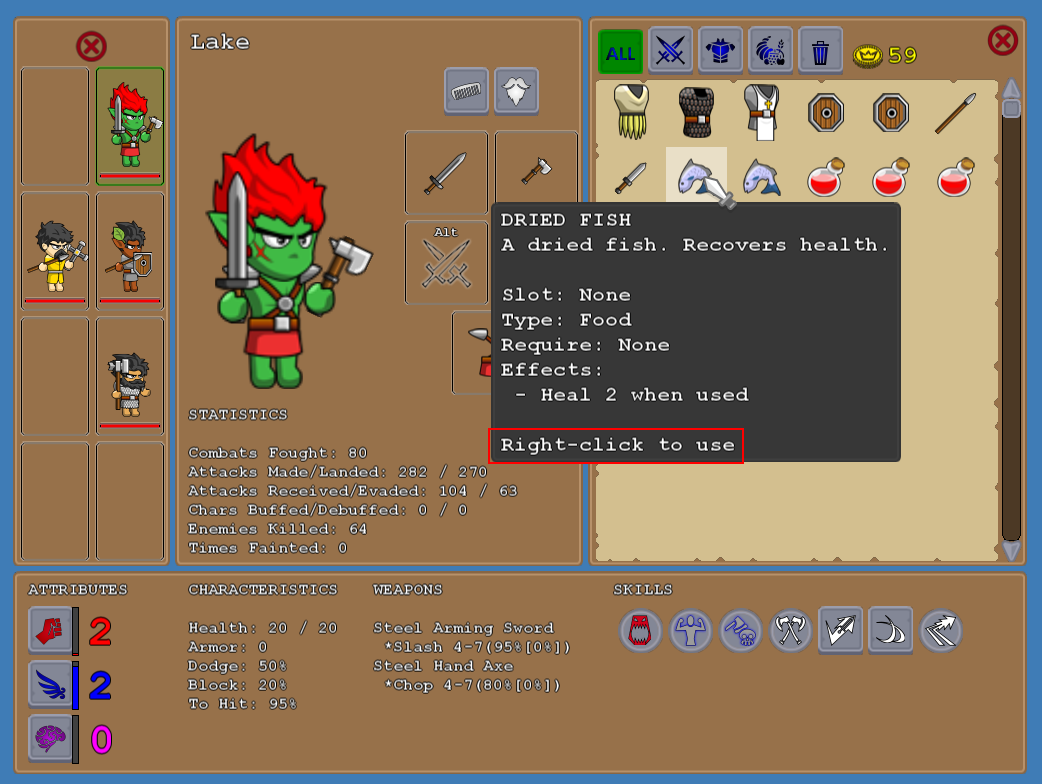 If your character have 0 health use a potion to bring him back to life. 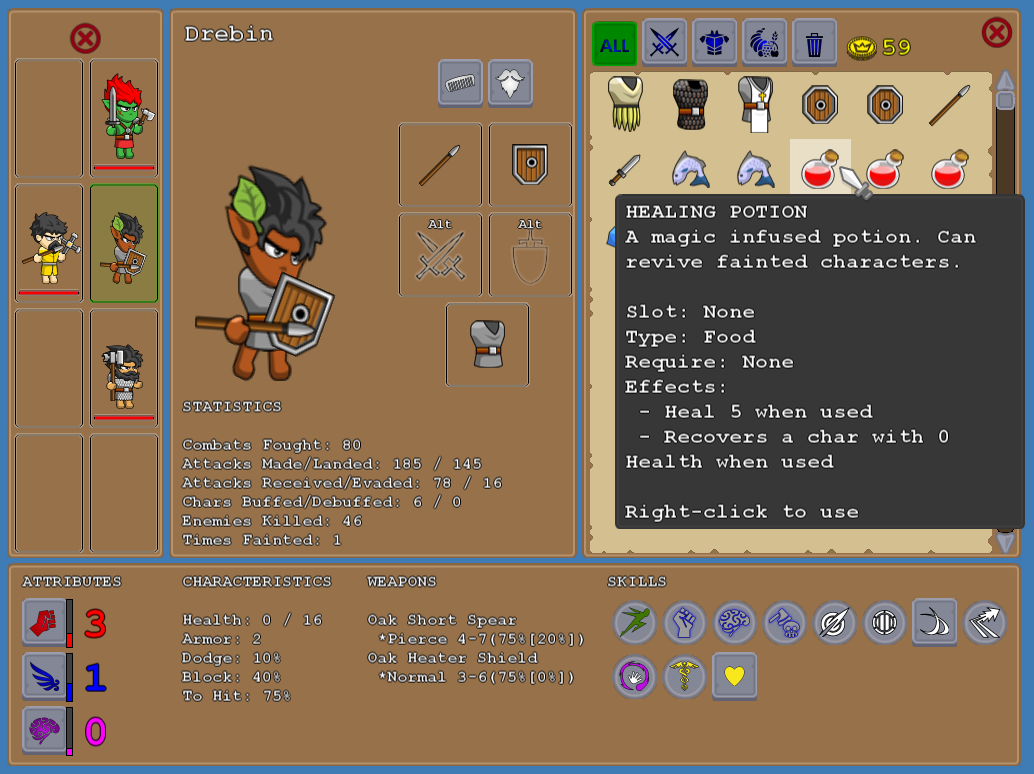 3. Evolve
Ok, you have some money now. Where do you expend it? Improving your characters, of course!

3.1 Gear
If you use a determined type of gear it will increase your experience when you walk, get hit or attack with that gear.
– POWER: Heavy Armor, Melee Weapons
– SPEED: Light Armor, Ranged Weapons, Offhand weapons
– MIND: Magic Armor, Arcane Weapons

Some gears have a requisite in an specific attribute for your character to use, so pay attention before you buy.

Heavy Armor: it helps reduce the incoming damage, if too heavy it starts to hamper your movement and your dodge chance.

Magic Armor: there are assorted effects like dodge bonus, start a combat with a Ward, improved To Hit and armor against Magic.

Swords: good to hit and block

Flails: good against armor and shield, bad to hit and damage

Reach Weapons: good for attack before being attacked in melee, usually Two Handed and are spread in many classes

Bows, Crossbows and Firearms: good to hit from a distance

3.2 Skills
Every town have skills to be trained depending on what buildings surrounds it. Check the Skill List guide to know which ones.

Endless RPG let’s you freely pick and choose your skills. If you want your sword-wielding guy to spark some magic out of his fingertips get it to use an arcane weapon on his offhand or get the Innate Spell skill. Want a dedicated archer? There are skills on all three combat schools (Weapon Skill, Attack Tactics, Fighting Style). Want magic? There are 3 schools of magic (White, Red, Green). And also 2 specialized schools (Might, Cunning).

Green Magic: from regeneration over time to summon beats and transforming into one to change weather and create fog to avoid ranged attacks or a poison cloud to damage charactes. It’s wild.

Might: look for Orc Arenas, gives an assortment active skills to buff your character and the party.
Cunning: look for Wood Elf Druid Circles, gives an many passive skills to improve your chance of not being hit and mobility.

3.3 Hire New Members
You can also increase your party to up to 8 characters. To do that, enter a Town, click Train/Hire, click an empty spot and hire a new member. 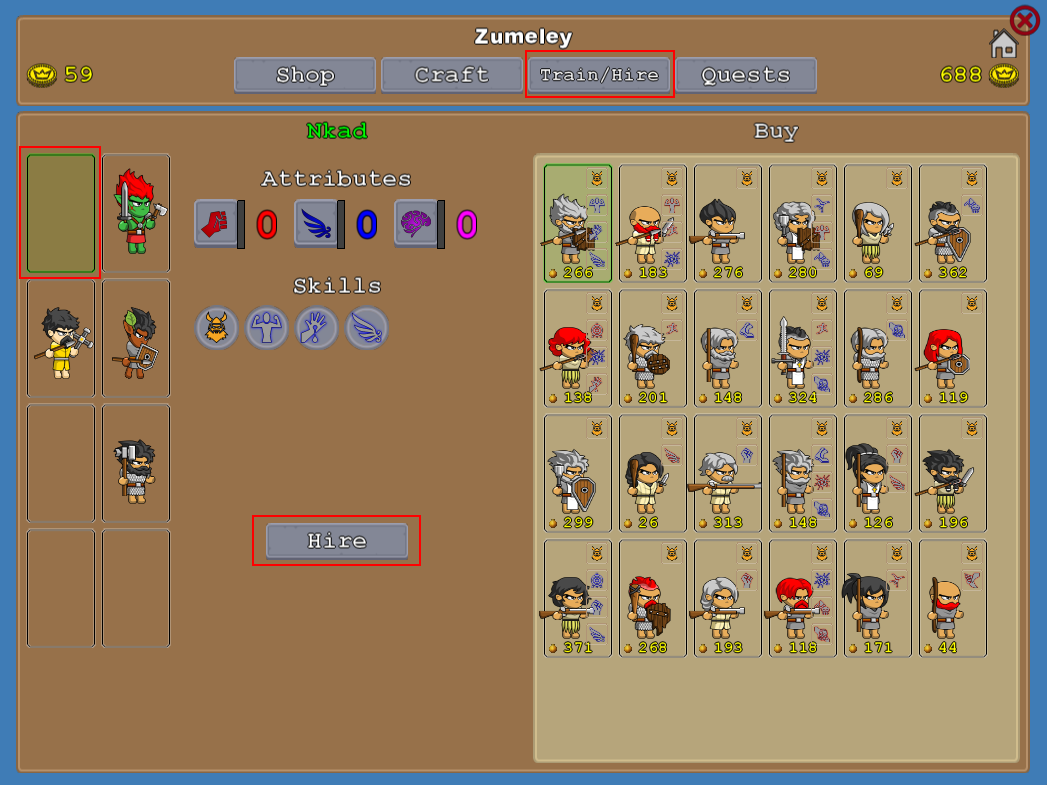