Epic Battle Fantasy 5: How to Edit Save (More EXP)

Alright. You’ve wanted to get to a perfectly reasonable level of 9001. However, due to time or whatever, you simply don’t have the drive to grind Cosmic Monoliths (Henceforth referred to as Cosmo Mons) 5 quadrillion times to finally get enough EXP.
Perfectly fine and reasonable, some people might also not want to grind out cash from Cosmo Mons to buy Steroids and other items.

If either of those appeals to you, or you just want to screw around with your save game and cause all sorts of trouble, you’ve come to the right place!

Right. First step is to find the save file.
It’s easily done, just have to find EBF5’s source folder.
Go to EBF5 in your library, right click on it’s name, and head down to the Manage Tab. Once you’re there click on “Browse Local Files” and it should take you to the source folder, with a ton of jumbled files and stuff. Don’t worry about any of it, save the .meow files. 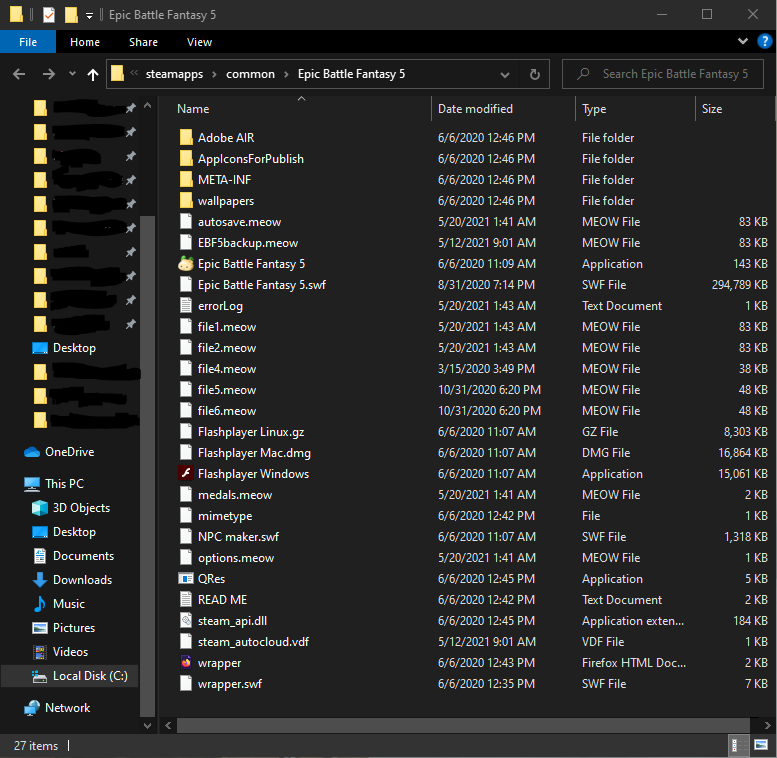 This should be what you’re looking at, at least on Windows. (Again, I don’t know anything except that, but it should be just as simple on Linux and other systems)

Getting everything setup and reading the file

Now that you’ve found the .meow files, which are your saves, we can get ready to start editing them.
EBF5’s save files are simple to decrypt and encrypt, with a simple Base64 Encryption. A google search will give you plenty of decoders for this, but if you’re worried about anything I’ll provide one at the end of this paragraph.
https://www.base64decode.org/

You now have a handy and convenient way to decode .meow files, and I suggest using your backup file just in case something goes wrong. Speaking of which, back up your saves. No seriously, do it. Editing the wrong things inside of this file are bound to cause trouble, and I have no doubt that some things can really screw up your save. Better safe than sorry I’d say.

With the disclaimer out of the way, back to business.
You shouldn’t have to deal with anything else, so go ahead and upload the .meow file and decode it using the very bottom decoder.
Once the decoding is done, you should get a prompt below the decode button that allows you to download a decoded text file. This file is your save, but actually legible and editable. You can use whatever you want to open it up, but if you’re a lazy person like me you can just use notepad or any text editor. It will then open up a massive mess of text that doesn’t seem very legible to the untrained eye. 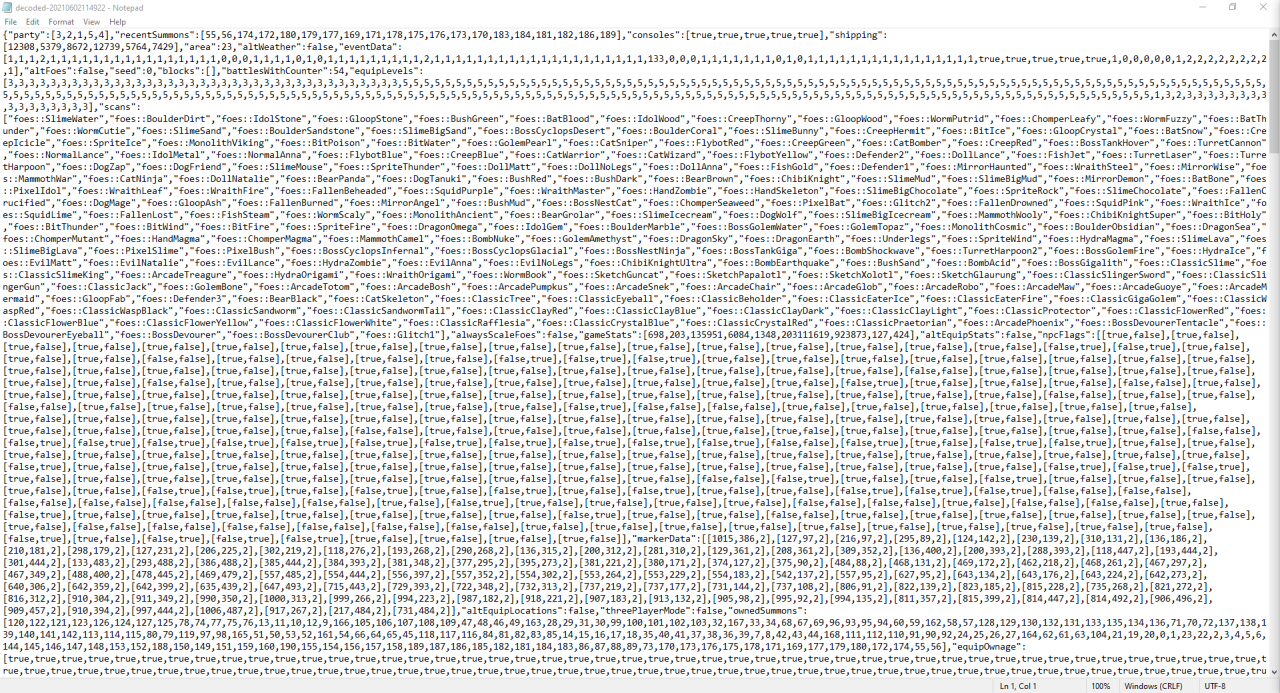 Seems pretty random doesn’t it? But there is a method to this madness, starting at the top.

There are still parts that are still being understood about this, and any testing is appreciated. Even I don’t know every in and out of the save file, and I will be describing a 100%ed save file. If your file isn’t at least close to 100%, do that first. It’s a challenge, but it’s very much worth it, and helps you get better at EBF5. I will always suggest playing the game normally over save-editing, but for people like me who want to mess around while waiting for new content, here you go.

Back to the file, first thing you see is the party, which is self explanatory. I don’t actually know what happens if you edit a file from the beginning of the game without all party members, and if someone wants to test that by all means do so.
-Next up is the recentSummons, which is also self-explanatory. The numbers will be explained away later, for now we move on.
-The console’s I still have zero idea about, yet. Same goes for shipping. –Area is self-explanatory as well, as is altWeather.
-eventData I am still figuring out, especially which events are which, but I think it involves story cutscenes.
-altFoes is for alternate battles, seed and blocks are still a mystery to me
-battlesWithCounter are battles that have foes counterattacking inside of them, and how many you have.
-equipLevels is the forge levels of all equipment you have.
-scans is the foes you have scanned, and can range from all of them to none of them. Pretty self-explanatory, and if you want to add foes there then you need the ids. Lucky you I have a 100% save file, and the only foes missing from the list I have here is the original Natalie fight and one other. I will endeavor to nab the ids as quick as possible to add them here.
-alwaysScaleFoes is the option where foes scale with your level the entire time, and get stronger as time goes on.
-gameStats is an interesting one, because I’m genuinely not sure off the top of my head which number is tied to which. I’ll be sure to find out soon though.
-altEquipStats is exactly what it says it is. It’s the alt equips you can get in a custom game, enable it if you want
-npcFlags is also what it says on the tin. It’s the collection of NPC flags that you’ve triggered over the course of your playthrough. I wouldn’t touch these since it might mess with quests, but that’s your choice if you know what you’re doing.
-After that wall of text there is markerData, which I still don’t know about at all. I wouldn’t touch it just in case.
-Next is altEquipLocations, threePlayerMode, and ownedSummons. All three are exactly what it says on the tin, with the ownedSummons in particular needing specific numbers that tie to different enemies. List of numbers and which enemy they’re tied to coming soon.
-equipOwnage is also exactly what it says, with each true/false corresponding to a different bit of equipment you can find. I wouldn’t edit it since it could mess with chests, but I haven’t tested it yet.
-cardQuantities is also what it says, with each number being a different card that you can find.
-equippedSummons is just the numbers from ownedSummons, but in this list means that they’ve been equipped in-game.
-alwaysGiveEXP, onePlayerMode, and medals are exactly what it seems. The medals one I think means whether or not you can gain medals, but I am still figuring it out.
-itemQuantities. Ohhhh boy, this one is a doozy. Each number seen here is a different item you can get, from key items to crafting materials, to steroids, everything. Each number is gonna be different depending on what you have, so you’ll have to look at each one and make sure you’re looking at the correct one when editing stuff. Don’t want to give yourself 200 of a useless item would you?
-After that we have twoPlayerMode and spellOwnage. The former is simple, the latter isn’t. Good lord the spellOwnage is a mess, because even with every spell in the game there will be 2 falses always there. I don’t know which spells they are, or what they do. Be really careful here, since those falses might be something super bad or just a cut spell from the game. Really hard to tell without sacrificing a save file and hoping it doesn’t die.
-spellOwnage is a pain, so the next 2 are not that bad. rareItemCosts and summonInfo are both simple and easy, nothing special here.
-textFlags and by extension books cause a massive wall of text that seems imposing when it really isn’t. This just controls the text that shows up inside the game, and if it’s already happened. books probably controls which books you’ve read for a medal or some other secret purpose.
-equipSets is exactly what it says, it controls the equipment sets. Don’t ask what the numbers mean, I still don’t know yet even after messing with it.
-playerData is next, and good gosh I have zero idea what it means. There are plenty of numbers and nulls/falses inside of there, and making sense of it is more than I’m willing to handle right now.
-Alright, these next 5 are simple and easy to understand. questNo, battlesWithResistance, cheats, customizations, and misc. customizations is one I don’t know about, but the first three are easy. First one controls if you have a quest or not, second one counts how many battles with Resistance you’ve done, and cheats is pretty self-explanatory. misc is a bit more of a mystery. I know at least one of them controls currency, but the other 3 numbers I’m still messing with. More details to come.
-This one is massive, and is probably the biggest one in the entire file. You shouldn’t need to edit it at all, so don’t worry about it at all. mapData is utterly insane, and it’s the last one on the list.

Final edits and re-integrating it into EBF5

Right! You’ve done your edits, gave yourself 1000 of every item and became uber-powerful. But all these edits don’t matter unless you actually manage to turn this decoded file back into a .meow.

The decoding site you used earlier? Better hope you still have it open because we’ll be using it’s encoding function to turn it back into a .meow file.
You’ll want to upload the file, and then you’ll have to make a few changes that might not be there already.
Just like before you want the character set to be UTF-8, but you have a few extra options now.
You’ll want to enable “Split lines into 76 character wide chunks”, and the newline separator just underneath the character set should be “LF (Unix)”.

With all of these done, you’re good to encode it and download it again. We have one last step though, and I hope you have good memory.
Go ahead and open up the encoded text file. It’ll be a illegible mess, and that doesn’t matter.
Go to file up in the top-left, and hit “Save As”. You’ll want to rename it to the file you decoded, and add a .meow at the end. So if you took your backup save, you’d rename it, “EBF5Backup.meow”
This will turn it into a .meow file and make it ready to be used by EBF5.
From here, it’s a simple matter to replace the file you just saved with your old one inside of the source folder mentioned earlier, and you’re done!

If you, the illustrious reader of this guide, have anything to add or want changed here, and you can provide proof that what you say is true, let me know and this guide will be changed to suit the new findings. The save file is still being tweaked and it’s secrets are still being found out after all.