This guide seeks to teach new players how to create a cheap defensive perimeter which won’t stop working during power failures as fast as possible, and how to expand from those humble beginnings to a more permanent defensive perimeter.

I am a person who likes to play Factorio co-operatively with his friends. My favourite thing to do is constructing defenses. Whether this is for the purpose of defending the primary factory, or conducting trench warfare against nearby enemy clusters to annex the resource fields below them makes little difference to me.

Recently, I wondered whether there was a good guide on the topic. I did some searching, and discovered that most guides cater to people who seek information on defenses for surviving the late game. This convinced me that a guide aimed at the early game was necessary. 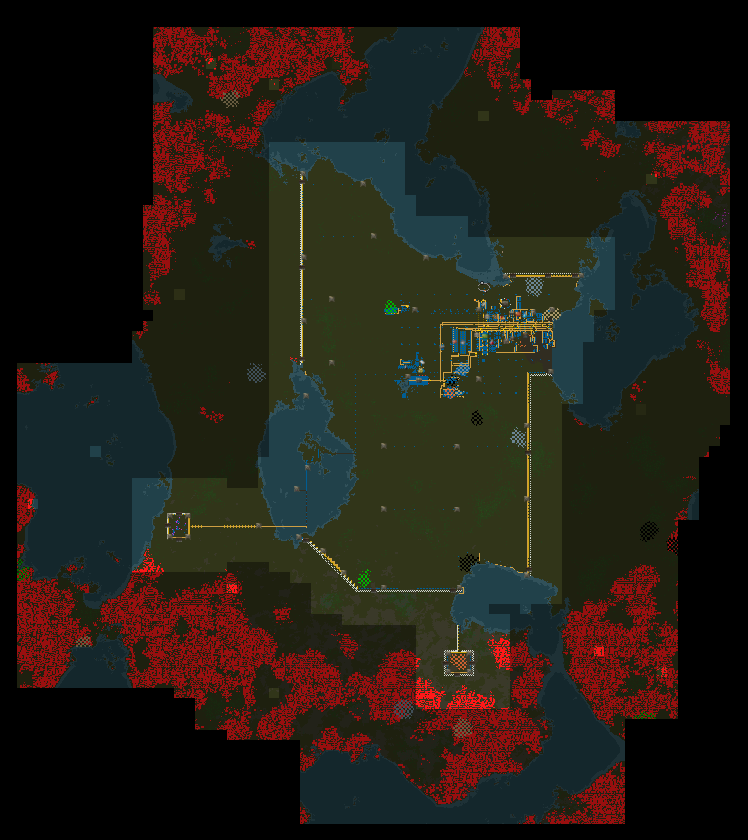 Generally, you will already have belts of coal available by the time defense becomes a necessity. Everything else can be relatively easily manufactured by Assembling machines. You should always endeavour to have automated production of all parts, regardless of how many parts you are presently including.

The bugs are as numberless and fearless as a gun turret is vigilant and accurate. However, even the best turret needs ammo. You can cheaply and easily create a small ammo factory with just 1 Small Electric Pole, 2 Assemblers and 4 Inserters, which will saturate both sides of a belt with yellow ammo made from iron plates.

The output of this ammunition factory is then merged onto a single belt by means of a T-section, forcing it to occupy only one side of a belt. The other side of the belt is for coal. 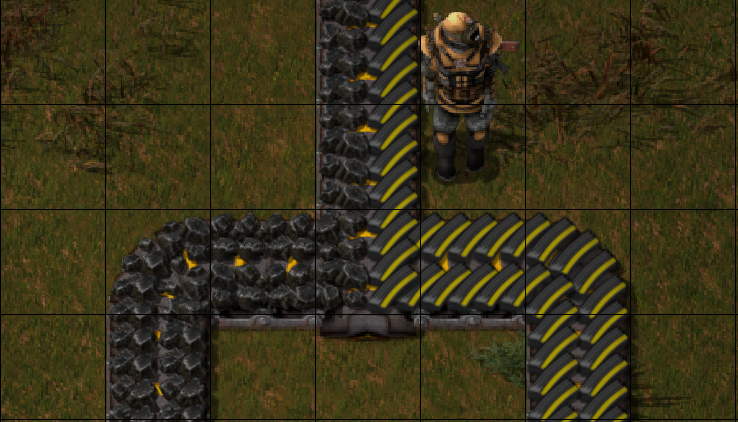 Now that we have a Feed Belt, we want to provide our budding factory complex with a cost effective and reliable perimeter. The best way to accomplish this is by placing your Gun Turrets in such a way that every Gun Turret is entirely within the field of fire of the Gun Turrets to its left and right. This ensures that if one Gun Turret is taken out, the perimeter is still entirely covered by the field of fire of other Gun Turrets. I call this a Maximum Dispersion Perimeter. The reasoning behind it is that Gun Turrets are expensive in the early game, and you want to cover as much ground as possible as soon as possible. 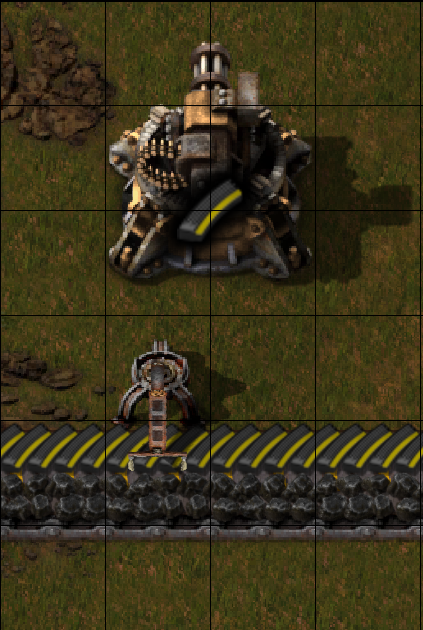 It should also be noted that you can reduce the risk of base-wide power failures by using Burner Inserters to shuffle coal into your boilers instead of electric inserters. Both the Burner Inserter and the Boiler run on combustibles, so it’s a match made in heaven that will ensure continued operation as long as coal comes in. Ideally you’d want one belt line of coal with 20 boilers on each side for a total of 40, each powering 2 steam engines for a total of 80. Each group of 20 boilers is powered by 1 pump. This should be able to keep your base going until you get nuclear power.

Eventually, enemy attacks are going to get stronger. Luckily, your initial perimiter will buy you all the time you need to get your factory set up. Once your turret production and Medium Electric Pole production are up and running, you’ll want to start modifying your Maximum Dispersion Perimeter into a Maximum Concentration Perimeter. The concept here is that instead of dispersing your turrets as wide as reasonably possible, turrets must now be as close together as possible in order to combine their fields of fire. Four Gun Turrets form one battery. Each battery is separated by a medium electric pole. This creates a reliable system of measurement that lends itself well to blueprinting once Construction Drones become available.

Once you have a literal wall of guns around your base, you want to commit to adding a wall. It is extremely important to keep one empty space between your wall and your turrets, because more advanced melee bugs have melee attacks that can hit structures behind the walls. You should also be mindful to change the type of ammo that gets fed onto the belt once it becomes economically feasible.

Walls need gates big enough to let a tank pass through without it breaking stuff. To achieve this, simply pick a turret section and remove the burner inserters, then the turrets, and create a gate that slopes back to the same tile axis as the Medium Electric Poles. Make sure that a gate always has at least one battery on its flanks. The combined firepower of two batteries should be enough to keep enemies away from the gate.

Once you get modular armour, right-click it and slap in Night Vision Goggles, a Personal Roboport, three Personal Batteries and fill the rest up with Portable Solar Panels. Keep 10 Construction Drones in your inventory at all times. This will enable you to build at night, but more importantly, it will allow you to place down pre-saved blueprints and watch as the drones do the work for you. Belt Immunity Equipment can also be slotted to prevent Belts from moving your character.

Making drones construct presaved blueprints drastically reduces the amount of time it takes to create a Maximum Concentration Perimeter. It is therefore recommended that you attempt to hold out with a Minimum Dispersion Perimeter until you obtain these magical point and click powers. Because a blueprint is all about placing objects down in complex patterns, it enables things that other players often ignore, such as Tank Traps. You might ask “What use are tank traps against an army of bugs?” That’s a good question. The answer is that as you kill enemies, their entire species will evolve in order to be more efficient at killing you. These larger biomorphs deal more damage, have more armour, have more health and move faster. The same tier of enemy that has an attack range so wide that it necessitated a space between your turrets and your walls, is also too fat to move through a single space, because he is a big chonky boi. Tank traps, therefore, allow smaller bugs to run straight at your turrets, allowing them to gun them down. Meanwhile, the bio titans will be stuck trying to get through the tank traps and will then be focused down by multiple turrets whilst doing so, as all of the smaller bugs that were supposed to draw fire for it are already dead. The minimum tank trap should be 4×4, but you can endeavour to make it as thick as your turret line’s firing range. The maximum recommended is 12×12. 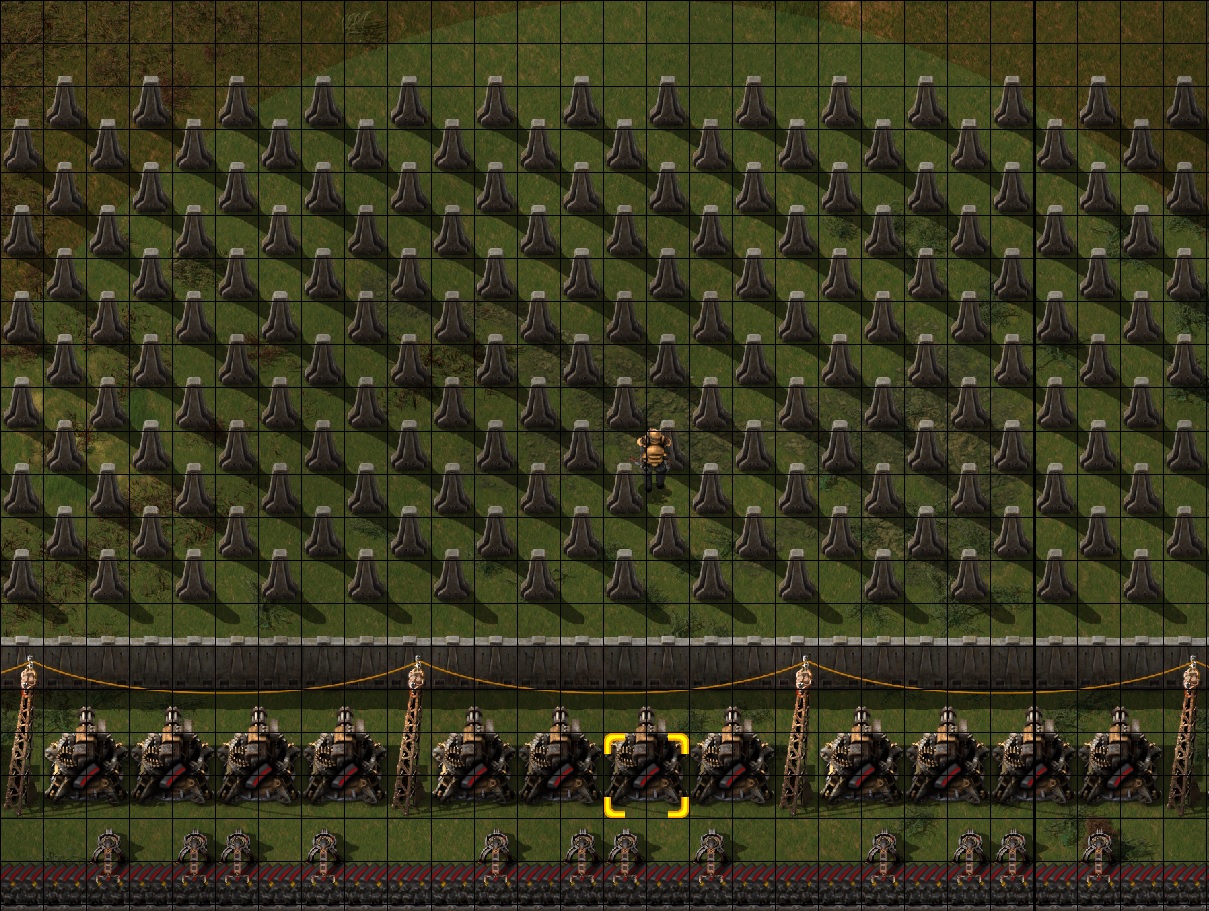 Just remember to leave a path through the tank traps whenever you construct a gate, or it will trap your tank. 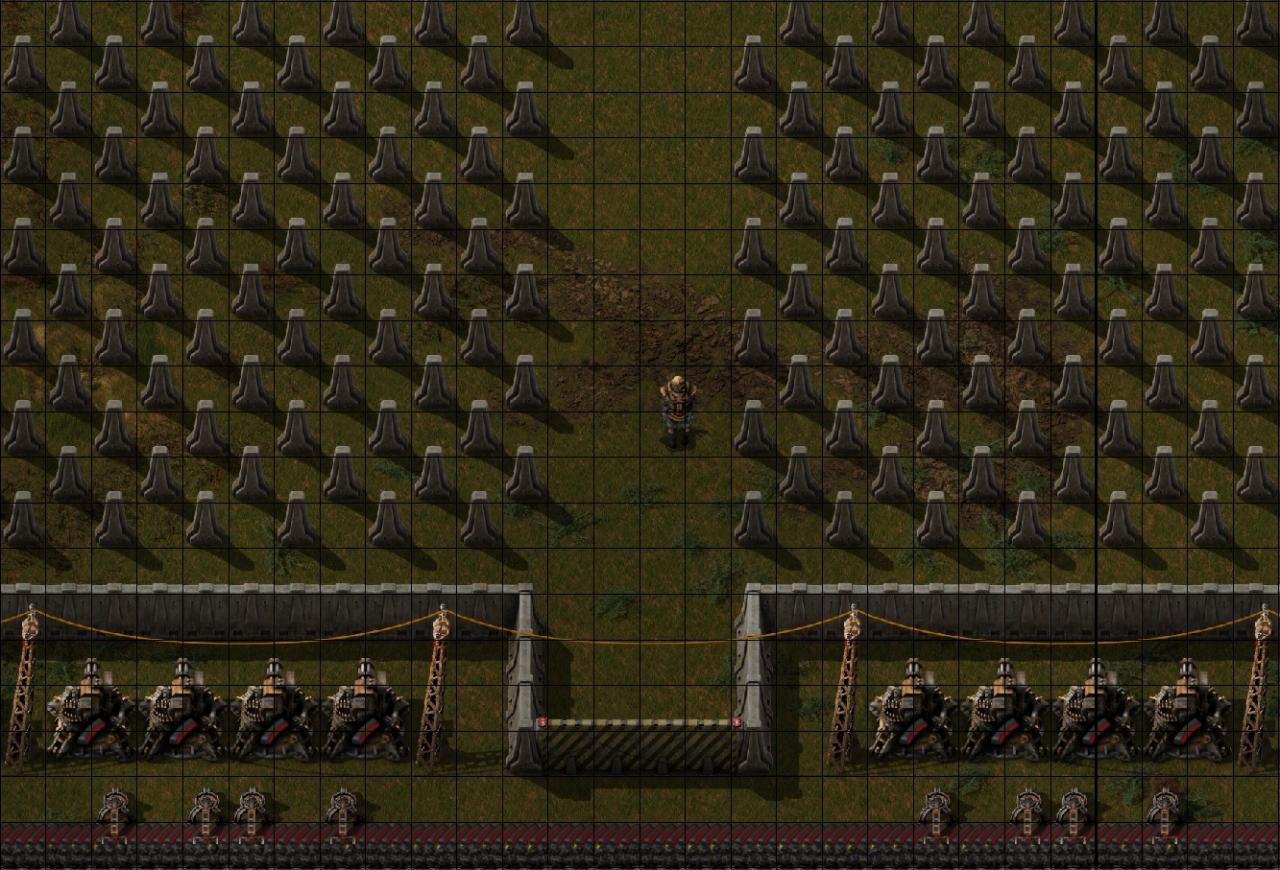 Now that you are able to use the Personal Roboporter, you will also be able to efficiently use defenses in an offensive manner, by using a trench to approach a resource site and then creating a base around it. 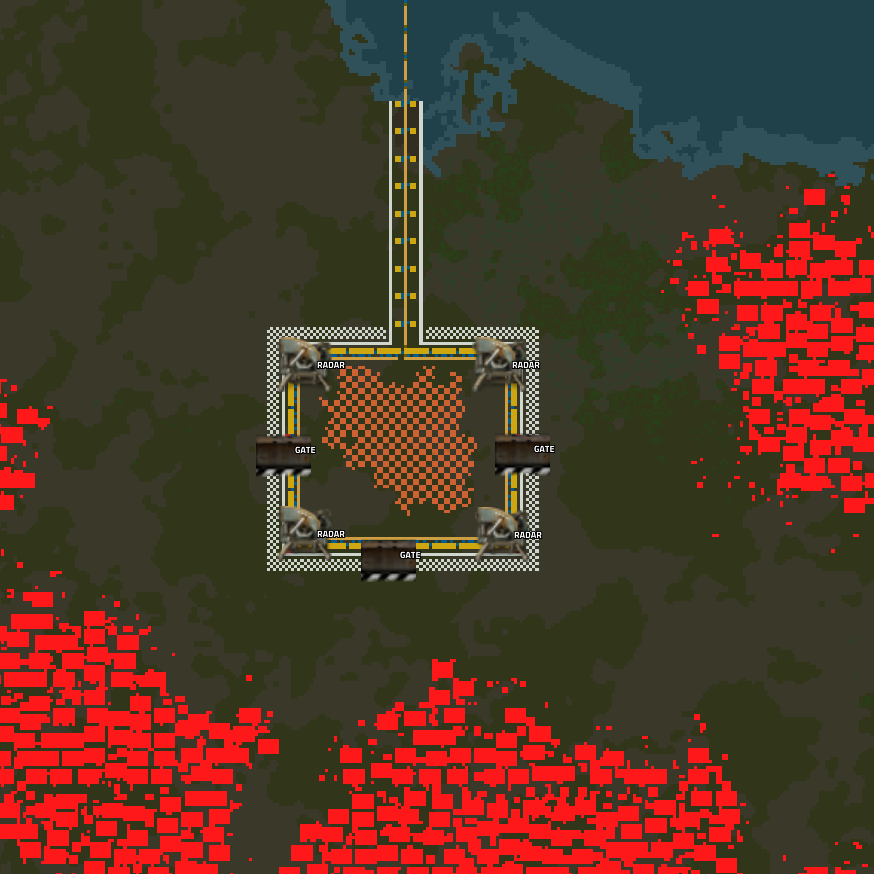 It is important that you establish radar coverage of the entire area covered by your defensive perimeter. This will provide you with a live map feed of what is happening in your territory, whilst simultaneously uncovering the Fog of War. It is also important to remember where you placed radar dishes, so add a map marker. Whilst you’re at it, also add map markers for gates.

Artillery is a very efficient tool for keeping the enemy from doing to your base what you did with offensive trenching towards resources. If the enemy bases get too close, they will start shooting your perimeter with Spitter Worms that outrange most defenses available to the player. Artillery guns only target enemy structures, and oneshot any enemy structure they hit. This in combination with their range should create a comfortably wide no man’s land around your bases.

Once you’ve got all of this pat-down, there’s nothing that prevents you from adding laser turrets and flamethrower turrets to your defensive line, but between artillery and fully upgraded gun turrets with uranium ammunition, there really shouldn’t be any problems.

Here are all admin commands for Primal Carnage Extinction game. here is also a simple tutorial on how to enable admin...

Let's get the real reason you're here out of the way- is the p*rn good? yes. absolutely. the female p*rn is fantastic. The male p*rn is...

This is a guide to help those looking to unlock the ability to run. You must complete the quest: "A Small Favor" This guide will tell you...

A few tips and tricks for the new scavengers in The Walking Dead Saints & Sinners.   The Basics So, your in NOLA and your...

Brick Rigs: How to Give your Vehicles Steering Systems

stuck on giving your first car steering? learn how to give your Vehicle steering here! it's very simple and quick to find out...