Ever want to kill NCR for being Profligates?(Profligates means slightly more dissolute) Well then let’s begin the Legion Build. First the backstory of our legion soldier, which we will call Augustus Caesar after the step-son of the real Caesar. (The character would most likely be a male character just because of how the Legion feels towards female soldiers, so I’m gonna say he and his and not do the /her or /she, because of this fact) Augustus was a proud Legion soldier and would give his whole life to the legion, he was eventually promoted to frumentarii (spy/undercover branch of the Legion) Augustus was honored to have this role, he was told to become a courier and travel the Mojave and other wastlelands listening on the things said and watching the things done. Eventually he was given a Platinum Chip and told to go to the Strip with it, while he was on the journey he was shot by the Dissolute Benny (Dissolute means lacking in morals) He reawoke barley remembering what had happened before then, the only thing he recalled was his love of Legion’s ways to kill Profligates and Dissolutes, and eventually remembers his loyalty to the Legion over the time he spends working for the mighty Caesar (which is meant to be pronounced like /ˈkaisar/ but is commonly pronounced /ˈsiːzər/ ) Ok enough learning when you want to pretend to be a murder who enslaves people for more of those murders and slavers in a video game. Into the build itself though. 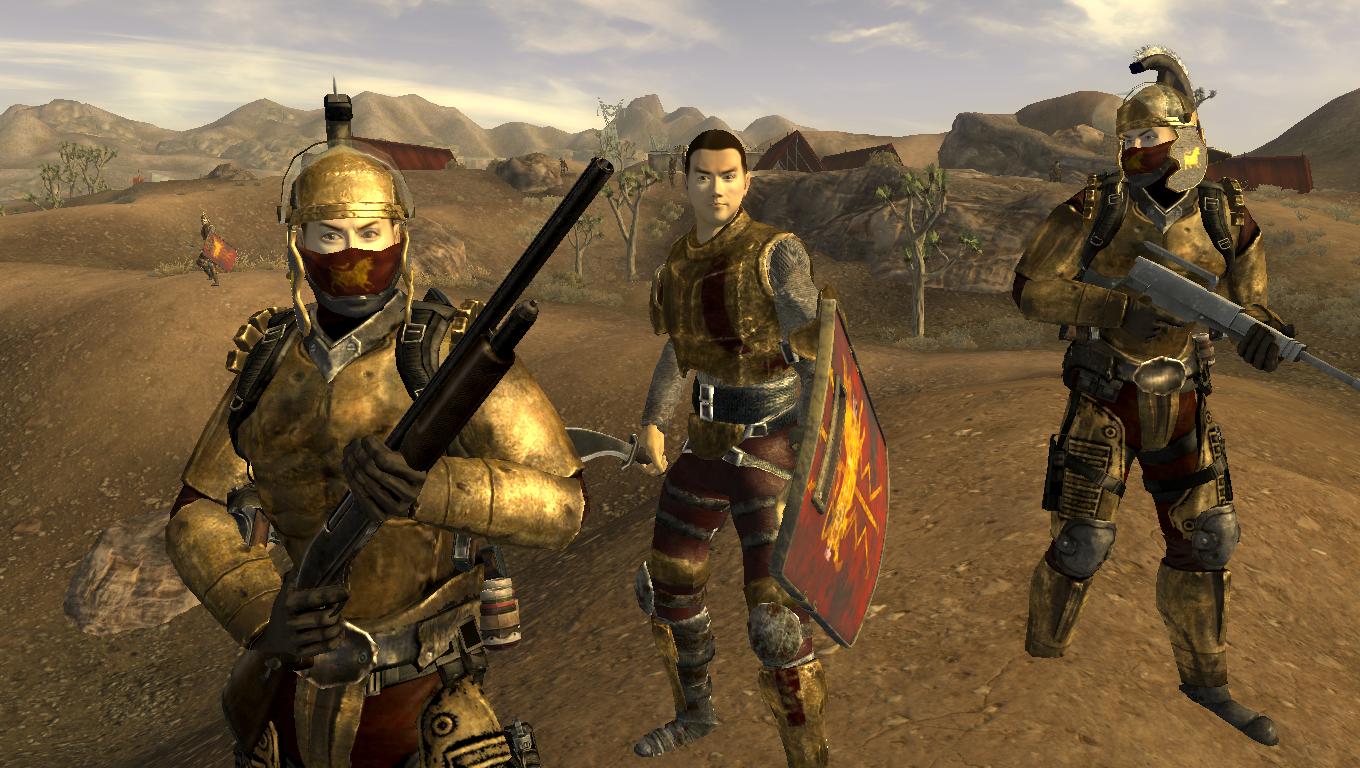 Strength- 9 The Legion is trained in hand-to-hand and with melee weapons including trowing spears.
Perception- 9 The Legion must know when someone or something is nearby to defend themself and attack the creature or person.
Endurance- 9 The Legion doesn’t believe in stimpacks,and chems being useful that it is an insult to Mars. (The God Of War)
Charisma- 1 The Legion has no time to talk to Profligates.
Intelligence- 1 Legionaries have no reason to think for themselfs and only need to listen to mighty Caesar.
Agility- 8 All Legion soldiers need to be quicker than most enemies to truly inflict damage with the melee they use.
Luck- 3 The Legion needs not for Luck to win a fight but Strength and the honor of fighting for Caesar.

Starting Perks:
Loose Cannon- A Legion soldier need to be able to throw his spears as fast as possible, but there are times when range is better then speed.
Heavy Handed- Legion needs to deal consistant damage with their weapons not leaving it to chance to deal a large amount of damage.

Followers:
Rex- He has a faded red bull on his body, which means he was a Legion Cyber-Dog. Do his Ain’t Nothing But A Hound Dog quest and give him Lupa’s Brain (Dog next to Antony in the Fort) which will make him even more of a Legion Dog.
Raul, and Lily won’t have any problem with Caesar’s Legion. Cass will go through with Legion but won’t like it.

Factions:
Caesar’s Legion…..Thats it….The Guide is called “Legion Build” what are you gonna side with? NCR? Mr.House? Yes-Man? yeah I thought so.

Armor:
Any light Legion armor such as Recruit Armor but no heavy or medium armor. any headgear as long as it’s light.
Weapons:
Any melee weapons, preferably Machete and Machete based weapons and Unique Machetes, and powerfist weapons, like “Machete Gladius” which is found on three Legion soldiers at Cottonwood Cove, you may be able to pick it off one of them if they are using a gun. The “Liberator” can get from Dead Sea in Nelson if you wipe out Camp Forlorn Hope, you could pick it off of him, any form of powerfist variants around the wastlelands, some Legion will have Thermic Lances, Rippers, and Chainsaws. Any throwing spear, you can use throwing knife, hatchet, or tomahawk from the “Honest Hearts” DLC. For Guns you should only use Cowboy Repeater, .357 Revolver, Hunting Rifle/Sniper Rifle/ Anti-Mat Rifle, Marsmen Carbine, .44 Magnum, 9mm and 10mm submachine guns, and other weapons found on dead Legion soldiers. Some Expsplosives like plasma grenades and dynamite which Legion Assaination Squads tend to have. No weapons to High Tech, because the Legion doesn’t believe in those items(- plasma grenades, and termic lances, becasue Legion Hit Squads have those weapons)

Fallout: New Vegas has released on Oct 19, 2010 on Steam. This guide was written by Arcade Gannon

Mafia: Definitive Edition – How to Fix No Intro Issues

Here is a simple guide on how to fix no intro issues for Mafia: Definitive Edition game. if you want to skip the intro, you can go to this...

** Information below here is just typed exactly as in the game. If there's miss typo or description, refer to developer. Find the wrong...

DISCLAIMER(Patch v0.1.0.9): EA = Early Access game. This information can be changed at anytime, by developer in the game. Use this as...

Vlad the Impaler: Every Class Guide

A guide that details the exact choices I made to obtain every class and beat Vlad with them Sorcerer Chapter 1 Port: Visit Dock...