Not only the first major character replacement mod bundled in, but a play-by-play of what I did to try to get it all working and how to do your own. Getting into doing your own mods will require external tools provided in the guide. 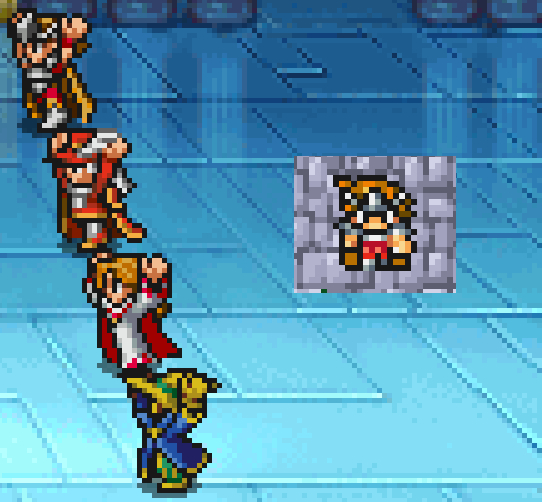 This will replace the battle sprites of all twelve classes, as well as the world sprites, with their Dawn of Souls assets. The battle sprites were recolored to resemble their PlayStation 1 Origins style more so they clash less with enemies in encounters.

I also included each of the sprites used to create the mod, with their numbers on each folder to denote who is assigned to which bundle, and also took care to separate the bundle folders in case one would rather pick and choose what they want. Feel free to modify and redistribute, technically none of these are mine in the first place!

All of the bundle files within the appropriate bundle folders go here:

Be sure to back up the original files in this folder so that you do not lose them, or require a Steam file verification!

What You’re Going To Need

So you want to get to modding sprites yourself? You’re going to need three things first and foremost, all of which were provided by the Final Fantasy Modding Community discord:

Unity Asset Studio[github.com], which will be how you look at and examine things within the game’s Unity bundle files as well as extract their assets for modification. While not NECESSARY if you use my assets as a basis, if you want to go any further beyond that you will require this.

UABE Avalonia[github.com], which is how you’ll actually insert the assets into the bundles individually. Scroll down to “latest version” instead of downloading the usual safe version, as it’s the only way you’ll be able to get into these recent bundles.

These will probably bother you about Microsoft NET 5.0 Runtime if you don’t have it already, but if you’re operating Windows it should readily direct you to it to install within no time.

And finally, this tweaked Unity Player executable[www.dropbox.com], which you will need to be able to even use mods at all by removing the CRC hashes the game expects. Replace the original .dll file in your game directory with it.

So you want to start modding. Let’s point towards the player battle files for our 12 classes first and foremost as we open up the Asset Studio executable. Let’s look at what we’re going to be briefly looking for with it. 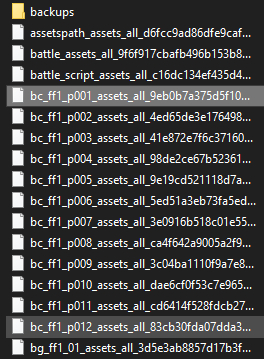 Generally, these should be 8-9 KB on average, and 10-11KB once I was done modding them. Within Asset Studio, you will want to select “File” in the upper left and find the file you want to modify. Browsing through the game’s assets is generally how you will find numerous things, but in this case we’re looking at the Warrior’s battle assets: 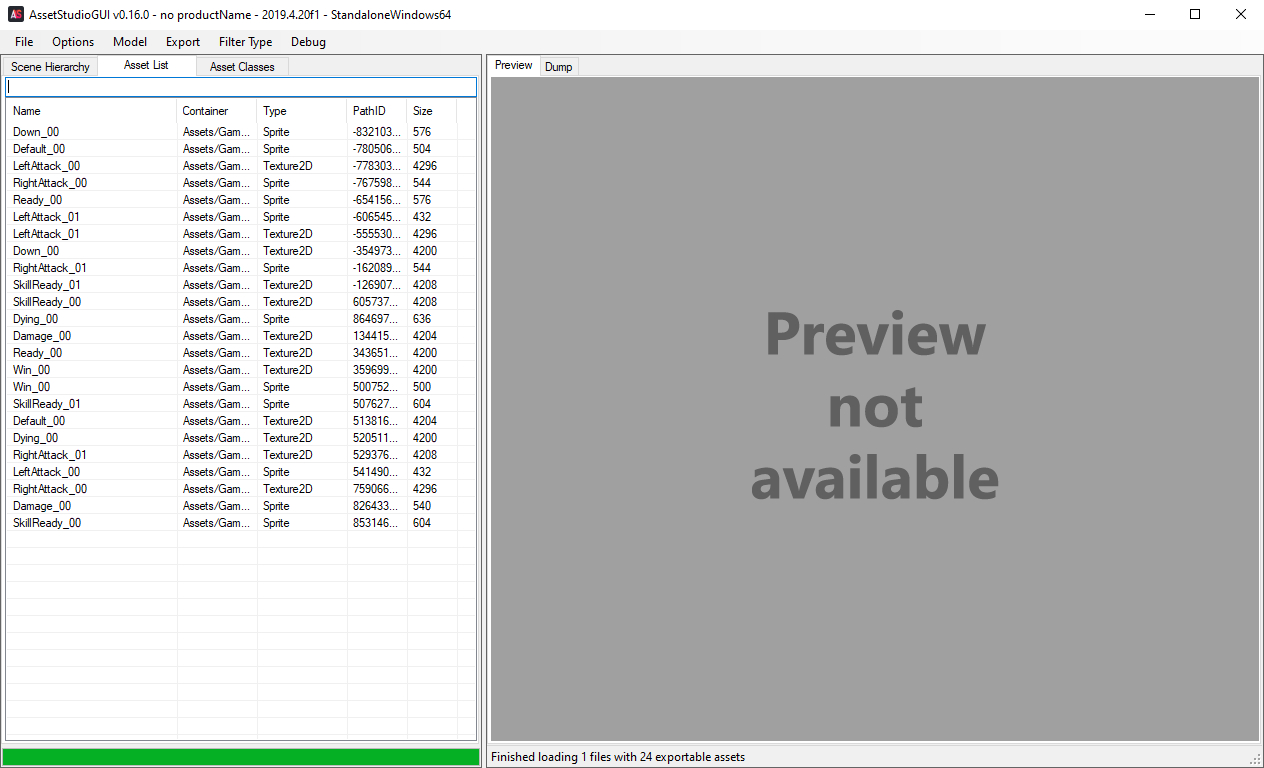 Click what you want to look at if you wish, but we’re here to mod. “Filter Type” set to Texture2D will give us what we want, as you can completely ignore the rest of the files within the bundle file and modding Texture2D is what gives us new things.

Isolate the sprites you want to modify, and right click them to extract somewhere, which will create a Texture2D folder wherever you pick.

Look at where you extracted them and you should find the sprites you want to modify. Do not modify their names, both for convenience’s sake and because these are what they’re referred to as in the bundles.

As far as I can tell there are no palette limits or color limitations, but for battle sprites you are currently limited to 32 x 32, and the map sprites require lining up with the original assets.

I did not include the actual in-game sprites and assets themselves (besides a small kerfuffle with Thief magic sprites he can’t use) so people can go extract their unmodified assets.

Additionally, you’ll want to look for these for the map sprites if you wish to edit them for the player classes, but good luck documenting the various world objects and NPCs.

Technically speaking, you’re now done with the Asset Studio until you need to ever extract more assets. Now, because I’m an idiot I accidentally uploaded images from me opening a map sprite bundle next, so sorry for the shift in file names.

I can’t walk you through the process of your sprite modifications, just remember what I said above about that and try to align things as you see fit. it does need transparencies, so something like freeware Paint programs, GIMP2, Photoshop or the like might be able to get the job done.Keep in mind things like the Darkness status effect’s shades over your character’s eyes or the like!

Now, let’s open up UABE Avalonia, or UABEA. This is the real work to finalize your creations.

Remember that bundle you extracted from previously, because you now have to go and open it. You’ll want to probably have a copy of it you’re now working from. Ignore the other menu options for now.

When the prompt shows up, select Memory so that you can modify it on the spot instead of finagling with saved things elsewhere.

Now is the point where we dive into the file by clicking “Info“. 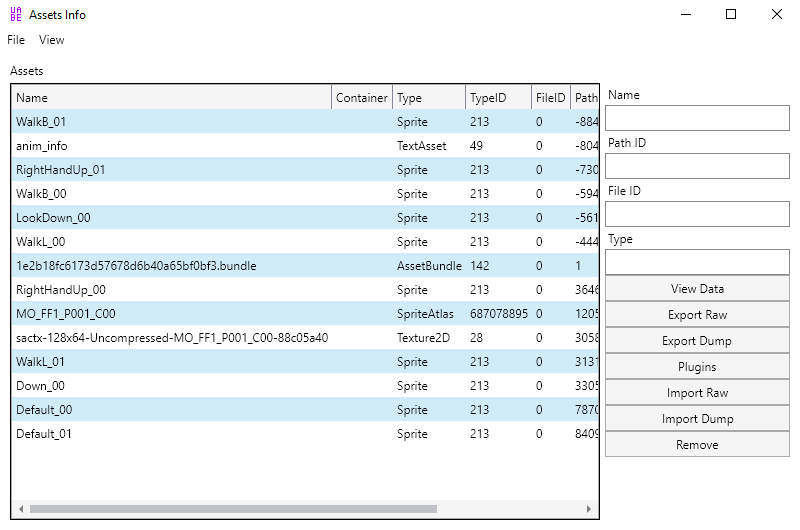 Much like the Asset Studio you’ll get a listing of all the assets within the bundle, including what we’re looking for. In this case, I opened up a map file bundle, so I only have one sprite to replace; remember that big-named map sprite from the previous section? I want to look for that as a Texture2D.

So let’s click the “Type” tab to organize for Texture2D. 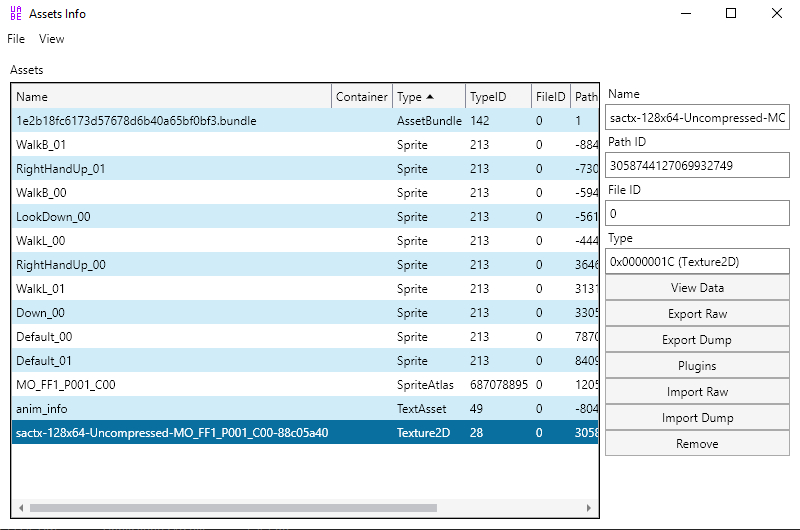 If we were looking at a Battle replacement, all of the battle sprites would be lined up with their names appropriately at this point to make it easier to select them. Now click what you’re here to replace like above, and go over to “Plugins” on the right. 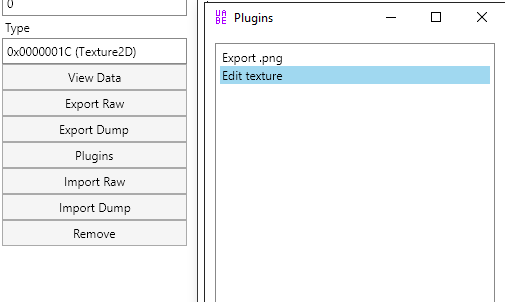 You cannot edit the Sprites themselves using this method as “Edit Texture” doesn’t show up for them, but Texture2D overwrites all the sprites anyway which is why we are going this route. Click it and open up the selection. 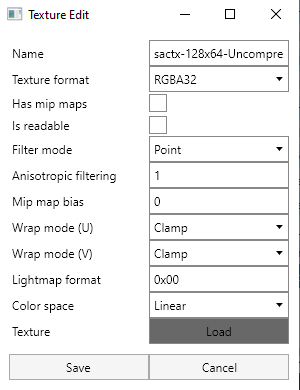 Ignore all of these other options and click Load near the bottom, before finding your finished sprite asset and clicking on it. This will basically slot in what you created into the bundle file and overwrite the old asset that was there. Once you’re done, click on “Save” and it’ll back out to the asset menu.

You have to do this tediously for each and every Texture2D you want to replace, which is notable since Battle sprites have a lot more to replace per bundle. Be sure to name check and don’t mix things up by accident, as the names are identical to what showed up in Asset Studio and what you should’ve kept their names exported as.

Once you’ve done your replacements, save on the asset menu as well.

Now you can close that part and exit out to the main menu. This part is a little tedious but was done as an example I followed: you’ll want to save this uncompressed bundle file separately to a different position, or maybe add a 2 or something at the end of .bundle to save it in the same folder.

Then you’ll want to open up that uncompressed bundle and then Compress it, saving it again elsewhere or with a tweak to keep it in the same folder. If you try to save over the file or compress onto an overwrite, the odds are that UABEA will crash, meaning you’ll have to redo the replacements. 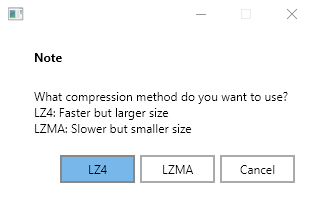 I have not tested the other compression type, so it’s safer to stick to LZ4 for now.

Once you’ve gotten all of that saved through and recompressed, it should be around 10-11 KB for our situation. Go back to the place where the bundles originally were in your game’s install folder, and after making sure the bundles you’re replacing are backed up, slot the modified new bundle into the folder like you would installing the mod, which may require an overwrite/replacement if there’s one still in there.

If all goes as planned, you’ve officially modified Final Fantasy Pixel Remaster’s sprite assets! While we have yet to see what will come with IV, V and VI with potential changes in the engine, as far as we can tell this should apply to all of the Pixel Remasters now and going forward, too!

Thanks to Raikoh for his great guide, all credit to his effort. you can also read the original guide from Steam Community. enjoy the game.

Kena Bridge of Spirits: Save Files for 100% Collectibles

Pick up the last of each collectibles to earn "find all..."   Links and Locations Back up your own save files first! 1) They...

Craftopia: How to Duplicate Any Item

Item duplication that works in single player, and doesn't require any third party programs.   Introduction This guide will show...

Uncencored DLC package + (non require steam auth) Uncencored Game Lore Unlimited Money save a mod for complete all of the...

Having trouble defending the kingdom of Solomon on your own? Well don't worry this guide will help you turn the Italians into pasta. A...

A guide showing you how to easily go infinite (or as close as the game lets you) in Prestige Mode   The Goal Greetings, Dome...