This guide covers the 49 currently obtainable achievements for the multiplayer and academy parts of Halo Infinite. The other 70 achievements will be obtainable on December 8th with the release of the campaign.

More achievements will be released over the next few years so I will keep this guide up to date!

Guide Structure (No. of achieves):

Please leave feedback and useful information below and help find any errors! 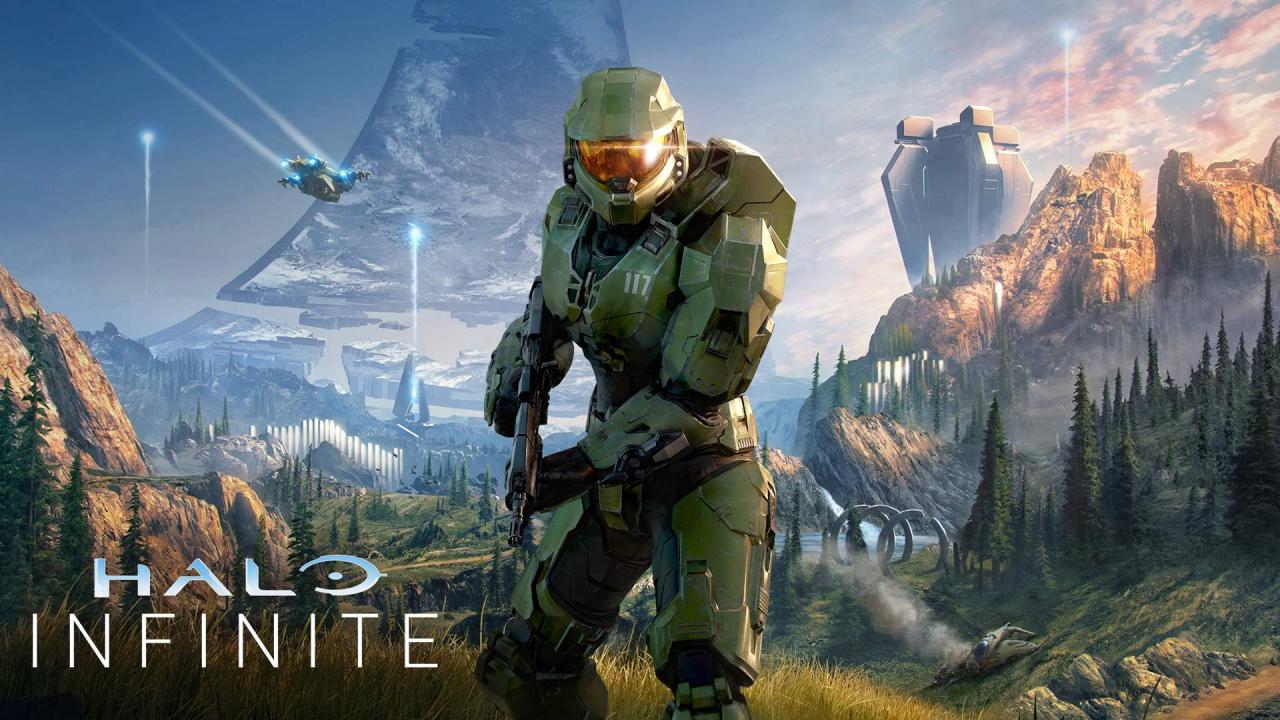 These achievements can only be acquired in specific gametypes in matchmade multiplayer.

-A Fellow of Infinite Jest:
“Kill three enemies with the ball in a matchmade Oddball game.”

Play Oddball games and while you are holding the ball make 3 melee kills. The ball does not kill in one punch unless they are not at full health. Two punches will kill a healthy player. Not as bad as it sounds, just focus on obtaining the ball and have some teammates help defend you and weaken enemies.

During a match of Big Team Battle, use your personal AI to hack into the ‘loot caves’.

On the map Fragmentation there are two loot caves found in the centre of the map but on either side of the canyon. It is a Forerunner door in the wall with a terminal alongside. Other BTB maps may have these ‘loot caves’. They have about a minute cool down after use.

After the door opens you will gain the achievement.

This has to be done in one game and requires the use of 4 different vehicles. Vehicles include: Mongoose, Warthog, Banshee, Ghost, Chopper, Scorpion, Razorback, Wasp, Shade Turret etc. I recommend doing this in a Big Team Battle gamemode.

-Running Laps:
“Capture the flag twice in a matchmade Capture the Flag game.”

Capture 2 flags in a single CTF game. Shouldn’t be too hard if you focus on pushing for the enemies flag and have a decent team. Can be earned in Big Team Battle CTF or 4v4 CTF.

-Straight to the Bank:
“Deposit 5 Power Seeds in a matchmade Stockpile game.”

Stockpile is a game mode in Big Team Battle where you must collect ‘Power Seeds’ (carried like fusion coils) and score put them into your base. Your team needs to capture 15 in total for a win (5 per point). Deposit 5 of these in one game for the achievement.

Note: The enemy team can steal ‘seeds’ out of your base so you may need more than 15 for a win!

-Control Freak:
“Assist in capturing all zones that lead to a score in a matchmade Total Control game.”

Obtained in the gamemode Total Control in Big Team Battle. You must help capture all three objectives (A, B, C) to score one of the three points needed to win. MORE INFO SOON!

-MEDIC!:
“Revive 3 allies in a matchmade Elimination round.”

-One Shot, Top Mid:
“Mark an enemy located at “Top Mid” in a matchmade game.”

‘Top Mid’ is a callout location on one of the multiplayer maps. MORE INFO SOON!

All achievements in this section have to be earned in a matchmade multiplayer game. Custom games will not work.

Just do okay in a multiplayer game and you will easily earn 2,000 points.

-Brutality:
“Kill an enemy with melee using a bladed weapon in a matchmade game.”

Earn a melee kill with the Skewer, Ravager or the Shock Rifle in a matchmade multiplayer game. Energy sword does not work for this achievement.

-Sick Burn:
“Kill an enemy with the Ravager’s charged shot in a matchmade game.”

While using the Ravager you can hold the fire mode to fully charge the shot. This shot leaves a damaging area of effect on the floor. For the achievement, kill an enemy with the fully charged shot when it impacts them.

-Kebab:
“Destroy an enemy vehicle with the Skewer in a matchmade game.”

Get a Skewer in a matchmade game and hope you can score a kill on an enemy vehicle with it. Big Team Battle may be easiest for this as it has lots of vehicles and weapon spawns.

-Back to the Chopper:
“Earn “Splatter” with a Brute Chopper in a matchmade game.”

While driving a Brute Chopper, run over and kill an enemy to earn a Splatter medal. Hardest part is finding a Chopper; keep an eye on the Pelican bringing in vehicles in BTB.

-Party Bus:
“Earn “Mount Up” in a Razorback in a matchmade game.”

A ‘Mount Up’ medal is earned by first honking the horn and then having at least 2 other players entering your vehicle, although for the Razorback it seems you need to fill the vehicle after a horn honk.

-They See Me Rollin’:
“Spectate an ally that is driving a Warthog or Razorback in a matchmade game.”

When you die in a multiplayer game (on a map and mode that has vehicles) cycle through your team mates spectator cameras and hopefully find someone in a Warthog or Razorback. You need to spectate them for at least a full second.

-Peeker’s Disadvantage:
“”Back Smack” an enemy who is zoomed in with a scoped weapon in a matchmade game.”

Melee an enemy from behind (‘Back Smack’) who is zoomed with a scoped weapon. Scoped weapons include: Sniper Rifle, Skewer, Battle Rifle, Stalker Rifle and maybe more.

-Working Remote:
“Pick up a weapon using the Grappleshot in a matchmade game.”

A fairly simple achievement. Find a Grappleshot on an equipment spawn pad and then use it on any weapon to grab it by holding the pick up button. (Must be a weapon not already equipped).

-Bomb Returned:
“Repel an enemy grenade with the Repulsor in a matchmade game.”

Can be obtained with little effort by obtaining a Repulsor, a fairly common piece of equipment, and then using it on an enemy grenade. You do not need to obtain a kill with the grenade, just effect it with the Repulsor.

-Do You Even Gift?:
“Drop a Power Weapon for an ally in a matchmade game.”

For this you must first bind the control for dropping your current weapon in the controls menu as I believe it is not bound by default. Then when holding a power weapon (i.e. Sniper Rifle, Skewer, Rocket Launcher etc.) drop it and have a teammate pick this weapon up.

-Secret Stash:
“Place an item in the Razorback’s storage in a matchmade game.”

The back of the Razorback can be used to store weapons and even fusion coils. Put one of these items into the back storage for the achievement.

-New Kid on the Block:
“Earn “Perfect” with a VK78 Commando in a matchmade game.”

The description for a ‘Perfect’ medal is “Kill an enemy with a precision weapon with peak efficiency.” Use the Commando in multiplayer to obtain a “Perfect” medal by killing an enemy without missing a single shot.

Using the Grappling Hook (found at equipment spawns) to grapple onto an enemy flying vehicle (Wasp or Banshee) and then hijack their vehicle for the medal ‘Grapplejack’.

-Watt Say You?:
“Earn “Chain Reaction” with a Shock Rifle in a matchmade game.”

To earn a “Chain Reaction” medal you must kill an enemy via a shock chain. When using the Shock Rifle it will chain damage onto nearby enemy players and you must gain a kill from this chain reaction.

-Enemies Everywhere!:
“Mark 3+ enemies at once in a matchmade game.”

Using the Threat Sensor equipment, mark at least three enemies at the same time. Try and find a clustered group.

-Slaying with Style:
“Earn a Mythic Medal in a matchmade game.”

All these achievements can be earned in Training Mode, Tutorial, Custom Games and Academy by yourself.

Simply load into a custom game from the main menu and then ‘End Game’. The achievement will unlock after this.

-Getting Strong Now:
“Launch into Training Mode for the first time.”

Enter a Training Mode match from the main menu (under Academy).

Pause the game in Training Mode and change any option.

Complete any Weapon Drill. Under Academy on the main menu.

Earn 3 stars on any of the Weapon Drills.

Every Weapon Drill has difficulty tiers. Complete 5 weapon drills at the Tier 3 level with a 3 star rating. I found the easiest drills to be: M41 SPNKR (Rocket Launcher), Cindershot, Needler, Sentinel Beam and the Bulldog. Most shouldn’t prove too much of a challenge.

-Doing Your Part:
“Complete the Tutorial.”
-Just the Two of Us:
“Access your Personal AI.”

Complete the Tutorial on the main menu under Academy. Doing so will also earn the achievement “Just the Two of Us” near the start.

-Make a Little More Noise:
“Grab a power weapon from the Tutorial armory.”

In the Armory, pick up the Assault Rifle and finish the shooting range part, with it and the grenades, through the door. Then go back into the Armory and the other weapons will be accessible. Pick up a Sniper Rifle from a crate.

-Get the Popcorn:
“View a clip in theater.”

-All About the Grind:
“Finished Ranked Placement Matches.”

I believe this achievement is earned for completing 10 ranked matches in order to attain your Competitive Skill Rank? MORE INFO SOON!

-Clocking In:
“Complete a Daily Challenge.”

Simply complete a Daily Challenge. These are very easy.

-We Have a Job For You:
“Complete a Weekly Challenge.”

Complete one of the Weekly challenges. Still very easy.

-Humble Beginnings:
“Complete one level in a Battle Pass.”

Complete 1 level of a Battle Pass by completing challenges.

These are all quite self-explanatory. A little information will be added for each achievement.

Can be unlocked by changing your Spartan’s colour, for example.

-I’m Ready, How ‘Bout You?:
“Change your Spartan’s look in the Customize menu.”

-“Need a Weapon?”:
“Try out a new weapon customization item.”

Unlocked by changing one of your weapon skins in the Weapons Bench.

Change any part of your Spartan Tag.

-That Thing on the Left is the Brake:
Test drive a new vehicle customization.

Thanks to ThePugHybrid and Artoriaz for his great guide, all credit to his effort. you can also read the original guide from Steam Community. enjoy the game.