Having trouble defending the kingdom of Solomon on your own? Well don’t worry this guide will help you turn the Italians into pasta. A basic step by step guide after choosing to defend Ethiopia on your own.

This guide covers the “Rally around the Emperor and the Emperor Stays” focus paths up until you kick them out of your country by around 1938. You will have to hold for 2 years while you set things up for your eventual counter attack and it’s important to time it right with a certain event that triggers on escalation 8 (Mass Desertion) in the Italian army.

The basic defensive setup can also work for the other focus paths for where you hold the line, but some changes will obviously occur depending on which focus is taken and that is not covered in this guide.

The first thing you will want to do is choose your first focus tree and research.

Put all military factories on basic infantry equipment and keep producing that through the entire war. Do not switch weapon tech mid war continue producing basic equipment until you drive out the Italians.

If you just keep producing guns you will have a small surplus by the time you start your counter attack and you will be able to modify and add additional troop width to your mountain and infantry divisions later.

After this you will want to create two armies one for the north and one for the south but don’t move any of the troops just yet. You should have 14 in the north army and 7 in the south similar to the image below

The only issues you will have is the south front where you will have to micro manage a little bit but not much and sometimes when the AI force attacks you (North or South) there might be times you have to trigger a last stand but this depends and will vary from game to game. 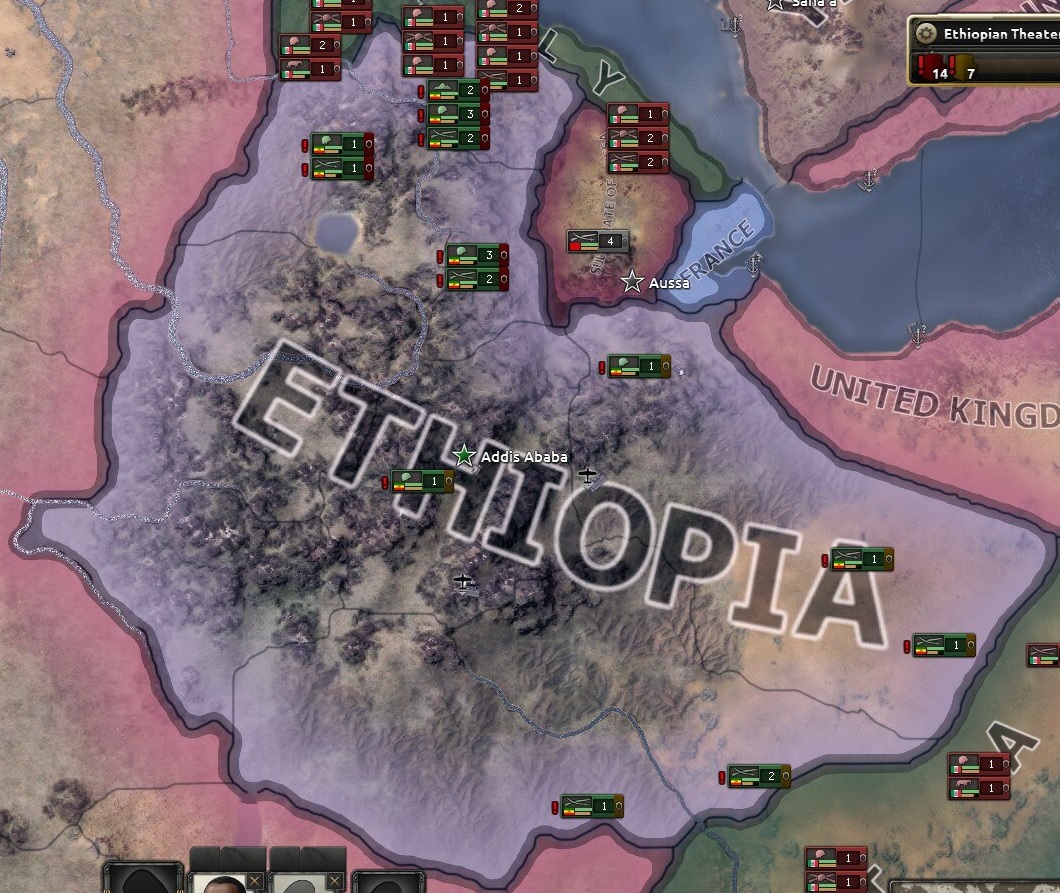 What general you choose in the very beginning is mainly for setting up your future forces and is entirely up to you but you will have an easier time by using one that has higher defensive stats in the terrain you are in.

You will not gain a field marshal until you finish the Rally around the emperor focus a little later but you can use him if you so wish later, or simply promote one of your better generals further into the war or after it.

Mountains in the north and Hills in the south.

You put the 3 bottom troops along the Aussa border as in the image while the 11 north troops you pull back to a fallback line this will be your initial starting line but will be moved slightly once Italy annexes Aussa.

Make sure to move the troops manually once you start the game and force a retreat back to the defensive line or they will get stuck being attacked by Italy. 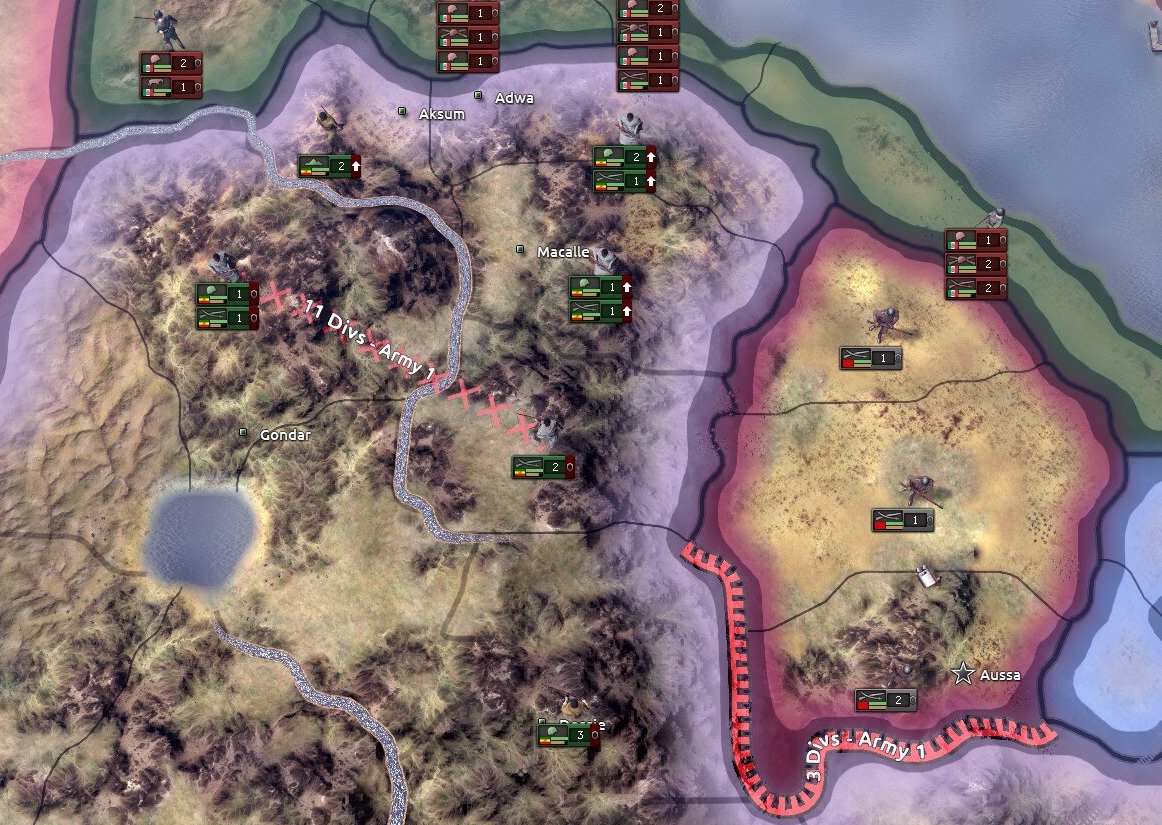 South
The southern line will go between Harar, Gaba and the south riverline as in the image below, this line will not change throughout the entire war.

Make sure to move the troops manually once you start the game and force a retreat back to the defensive line or they will get stuck being attacked by Italy. 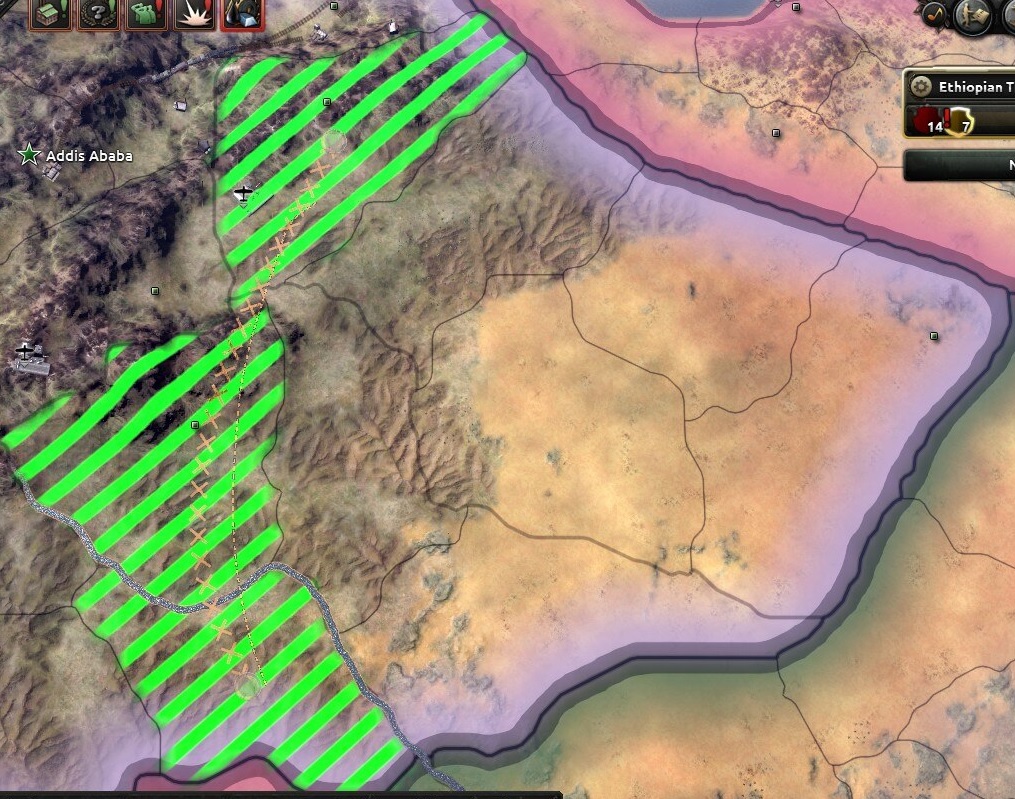 Once you start the game you can play on whatever speed you are comfortable with but using this defensive line you should be able to just put it on 5 speed and simply pause if you need to do that.

However for the start of the game make sure to look out for Italy annexing Aussa the country that is your neighbor in the north once Italy does this pause the game and just move it a little slower until Italy takes the land and move your troops in to Aussa city which will be explained a little further into the guide.

Sometimes there will be events that pop up that can give you extra political power / stability or factories / units. The best choice here is usually factories and units that you will want to use to reinforce your weaker defensive lines

You can go down either the Mesafint or Mekwanint balance of power and still win either path but this guide covers mainly going straight for Mekwanint to unlock a focus Tree later. 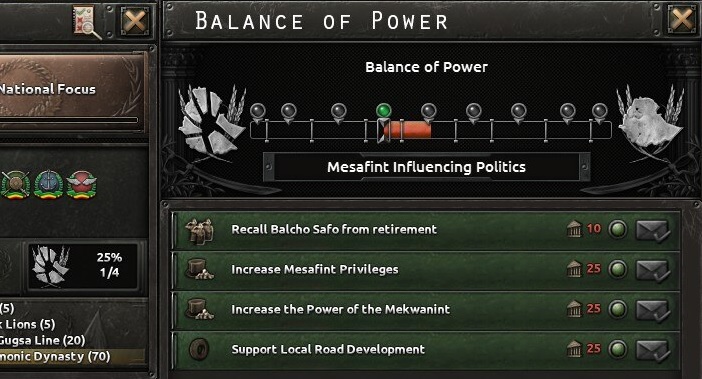 After this initial starting phase you can follow my focus, research and political power guide sections for the rest of the war.

When Italy annexes Aussa you will need to pause the game to make sure you enter the city of Aussa before Italy does. This is very important so you can gain an additional military factory 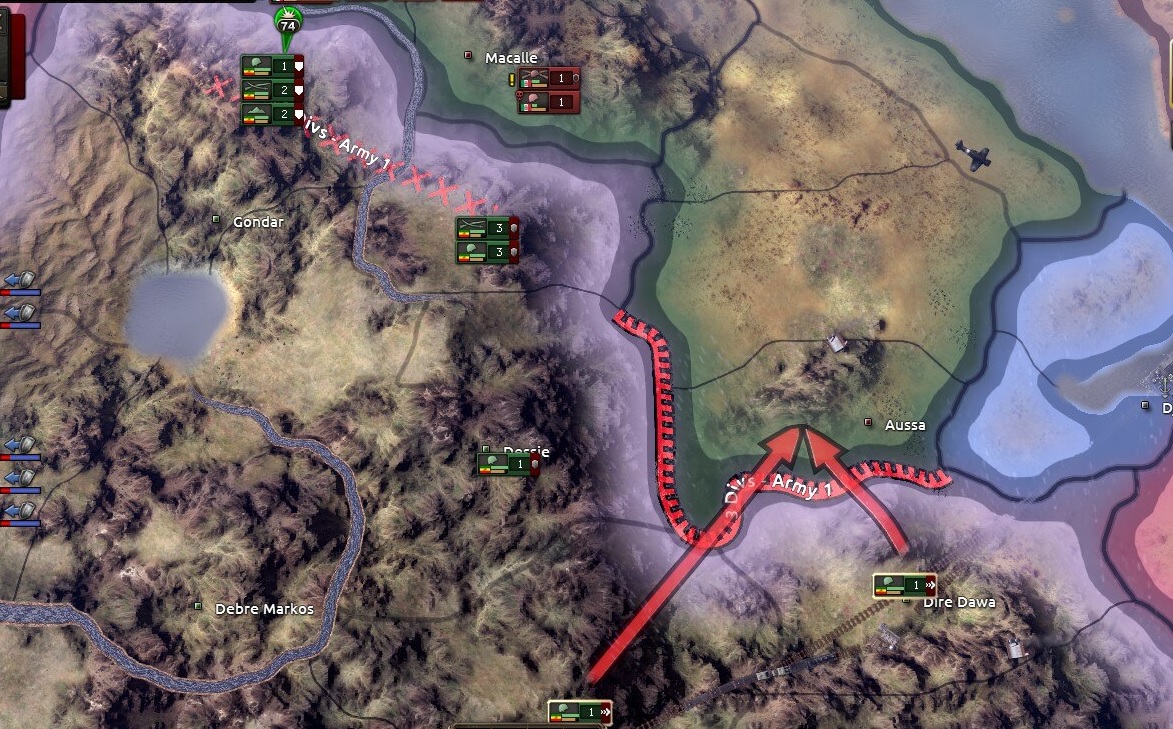 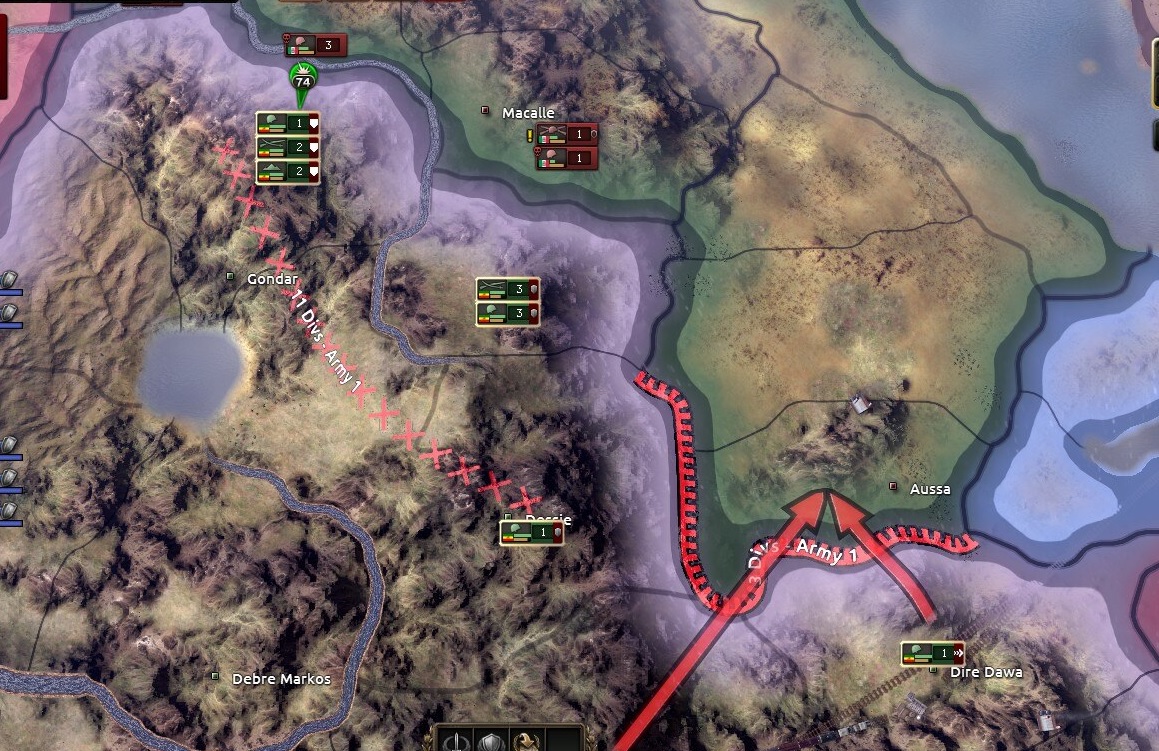 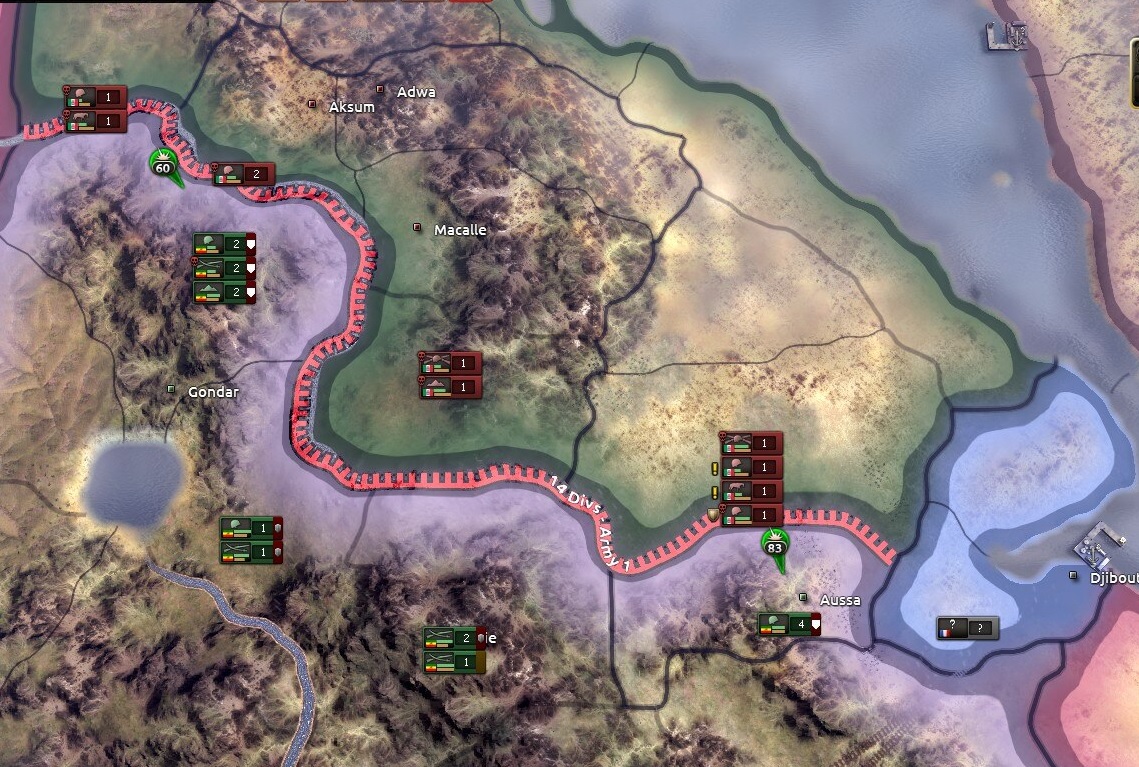 Defending until 1938 and Fighting back

Focus on building up political power, command power and completing the focus tree until 1938. Micro your forces whenever necessary to make sure you hold the line.
Research, Political and Command Power and Focus Tree

Look at the focus tree and political and command power segments on this guide for the order of what you should be choosing things and the various focuses, they are covered there.

If you have put all factories on guns and gone through the research tree as described in the guide you should be making about 12 guns per day and have a surplus of about 2-3k guns before you start the counter attack.

Once Italy receives level 8 war escalation they will receive a massive temporary debuff leaving them without organization and equipment temporarily. This will be the time you will want to push.

Once the mass desertions event hits you will want to push your units either into the north or the south depending on where you want to attack and what focus you choose.

You can also attack both fronts during this event if you wish but it is recommended to put most of your forces on one front to push it out first leaving a smaller force to defend the other front while the Italian army recuperates. 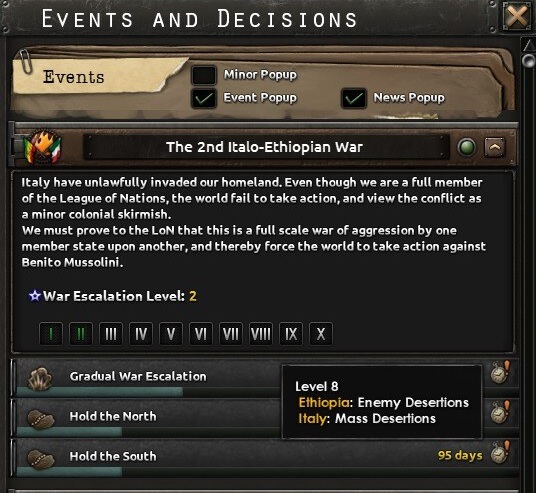 Retaking a Front north or south

Once you retake a certain amount of land an event will trigger for peace, you can either accept this or keep pushing.

If you accept it you won’t be able to Annex the two Italian colonies so i recommend denying this event and pushing on but if you don’t feel comfortable being able to push out further simply accept the peace and you have now won the war against Italy.

Claiming all of Ethiopia + Italian Colonies

From here it’s up to you how you wish to proceed!

This will be a basic list of what focus tree you should pick first and in order after the first one.

You are free to pick whatever you want yourself after Expand the Mehal Sefari but i would recommend at least going down towards The junior officer corps to remove research penalty and your army will be slightly weaker if you don’t follow the below guide to instead pick up the research slot.

Just make sure that you are prepared by the time the 8th Escalation hits as explained in the guide for Victory in the desert or Northern Thrust to time those together.

Anything after this is your choice as you should have won the war by now.

Political power and Command power should be used in a specific way.

It’s important you do not deviate and pick an advisor that gives Mesafint political balance or you will loose access to Expand the Mehal Sefari for a long time.

Political power usage after activating Expand the Mehal Sefari can be completely up to you, fill the Military staff and get the advisors first then add the Theorist, don’t spend military exp unless it’s on army command before you get the reduced cost focus for Doctrines later.

Lastly get War economy and Extensive conscription once you have gotten the focus Expand the Mehal Sefari while you are still at war.

That way you will have a lot more manpower after the war and still be on war economy after it.

Research is pretty straight forward you only have 2 slots unless you go down the route for the extra slot but that will weaken your army so i don’t recommend it until the war is over.

Things that help your basic weapons and Radios will be the most useful with the machine tools for extra production efficiency.

Anything after this should be after the war with Italy and will be up to you to decide, of course you can try different combinations this is just what i have found to work best and give your basic infantry upgrades.

Thanks to AgentSmith for his excellent guide, all credit to his effort. if this guide helps you, please support and rate it via Steam Community. enjoy the game.