HighFleet: How to Easily Destroy Each Armored Ship

How to instantly kill most scary ships with AP shells, or how to destroy each ship in the most expedient way with HE if you’re too poor or stingy to use AP.

You should aim to either destroy most engines on one side of the ship, or try to get through to an ammo magazine next to something important like the bridge.

Enemy ammo magazines are highlighted in yellow on the ship status UI. Even minor damage to a magazine will detonate it, destroying all connected magazines and badly damaging or destroying surrounding parts.

Armor-piercing (AP) shells will penetrate armor without destroying it, and damage components behind the armor. This is very useful for detonating ammo magazines, or in some cases quickly destroying an important large thruster through armor.

As you’ve probably noticed by now, to put a ship out of action, your main options are:
– Destroy the bridge. This usually happens as a result of ammo explosions, but certain ships have their bridge placed in relatively vulnerable areas.
– Reduce enemy thrust-to-weight significantly below 1 by destroying or damaging enough engines. Note that ships can survive with slightly less than 1 thrust-to-weight ratio.

You can also destroy all power generators. This is not relevant for most large ships, but once in a while you can get lucky.

Explosives like missiles, rockets, and bombs, etc. (and 180mm shells, to a lesser extent) have splash damage and can damage parts through intervening hull and armor. Armor greatly reduces splash penetration, but does not remove it altogether. You can sometimes detonate ammo magazines through intact armor with a lucky missile hit.

The following sections give recommendations for each common enemy heavy ship. No spoilers for endgame heavy ships, you can deal with those on your own. Primary weaknesses are highlighted by red boxes, and arrows indicate the directions you should try to fire from. 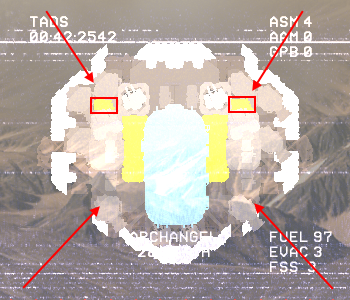 Relatively hard to kill for its size, and AP won’t help much.

You can also try your luck at detonating the top magazine with AP from the top left or the top right, but it’s not usually worth using AP on this ship.

The bridge is right below the top center armor panel, but is not usually worth going for. 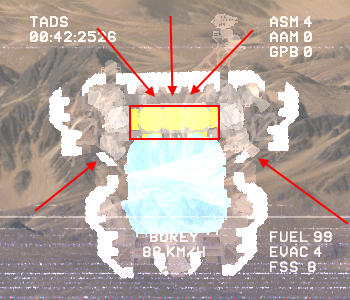 Detonate the main magazine from above with AP for an instant kill.

If you don’t have AP ammo, you can try shooting at its “armpits” from the lower left or the lower right. Unless your aim is very precise, it may be faster to just go through the armor from the top. 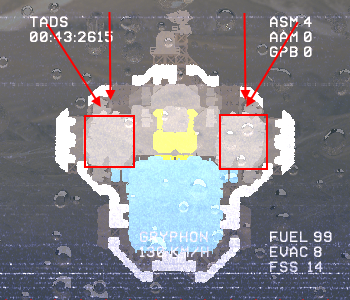 Destroying either of the two large thrusters will cause the ship to lose control. Shoot from above left or above right. AP will help, but only slightly.

The bridge is just under the armor below the white ELINT dome, but unless your aim is perfect it will usually be faster to destroy a thruster.

If your ship is vulnerable from below you can try destroying the thruster with AP through the armor from the left or right, but it can take quite a few shells. 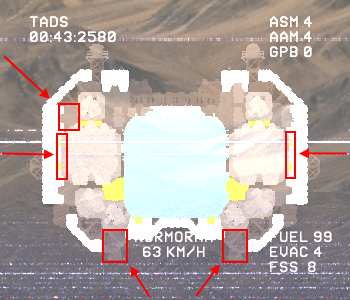 Detonate the left magazine from the side with AP for an instant kill. The ammo magazines are directly below the armor on the left and right side, mostly hidden in the UI by the large thrusters. The bridge is directly above the left magazine.

If you have to shoot from the right, you may have to finish off the large thruster with regular fire after detonating the right magazine. If it survives, aim to destroy either unarmored fixed thruster from the bottom.

If you have no AP, shoot up from the bottom left or bottom right to try to detonate the lower magazines, or just punch through the armor from the left. 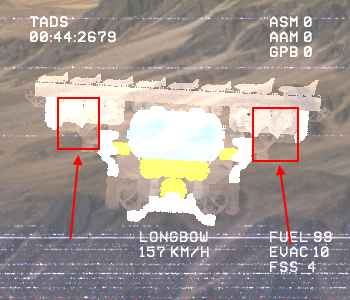 Aim to destroy all three engines on one side from below. You can detonate the magazine from directly below with AP, but it won’t kill the ship immediately and generally isn’t worth it. 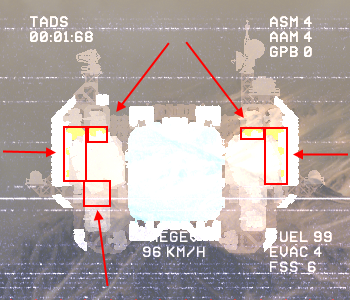 Detonate either the left or the right magazine with AP from the side for an instant kill.

If you don’t have AP, try to shoot at the opposite “shoulder” from above to detonate the small highlighted magazine. Alternately, try to destroy the bridge by firing straight up through the unarmored section at the lower left.

This one’s easy compared to the others, but it gets an honorable mention for people getting slapped around by it in the early game.

Shoot down at the “shoulders” from above to either destroy the two engines on one side or detonate the magazine. 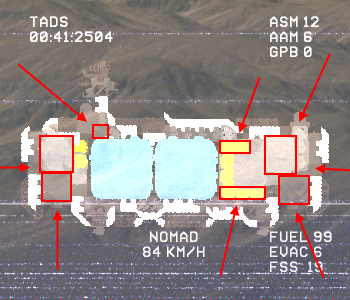 Your general goal is to destroy both heavy thrusters on one side of the ship.

Fire at the thrusters from the bottom left, bottom right, or top right, following the direction of the arrows. If you have lots of AP or enough firepower, you can just blast through the armor from directly to the left or the right.

The bridge is just below and to the right of the white ELINT dome. If the top left of the ship is facing you, going for the bridge can be faster than destroying the thrusters.

You can also use AP to detonate the right magazine from the top or the bottom. This will not destroy the ship, but will rip a hole through the bottom armor and cripple its guns. If you are lucky the ship will burn down by itself. If it puts out all the fires, you can finish the thrusters on the right side through the new hole in the armor. 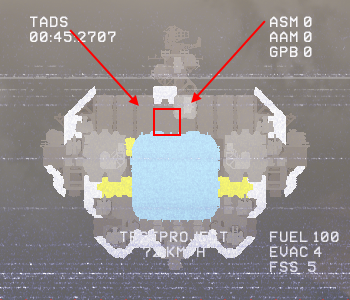 Rarely seen in the campaign, but it still gets an honorable mention here.

Destroy the bridge under the top armor panel from above left or above right. Alternately, destroy either thruster from directly above.

Thanks to Laevateinn for his great guide, all credit to his effort. you can also read the original guide from Steam Community. enjoy the game.

This guide describes the weight of each item in the current version and the weight a beaver can carry.   Item weight per...