HighFleet: How to Sudden Strike

After some experimentation I think I have figured out the Sudden Strike mechanic, as well as what the CHANCE numbers in the ship editor mean.

In summary, the chance for sudden strike means your battlegroup will succeed against Chance% of the enemy groups you may encounter. (Note, I didn’t say ‘towns’ or ‘garrisons’)

The key random element in this number is the detection time of the enemy being attacked. 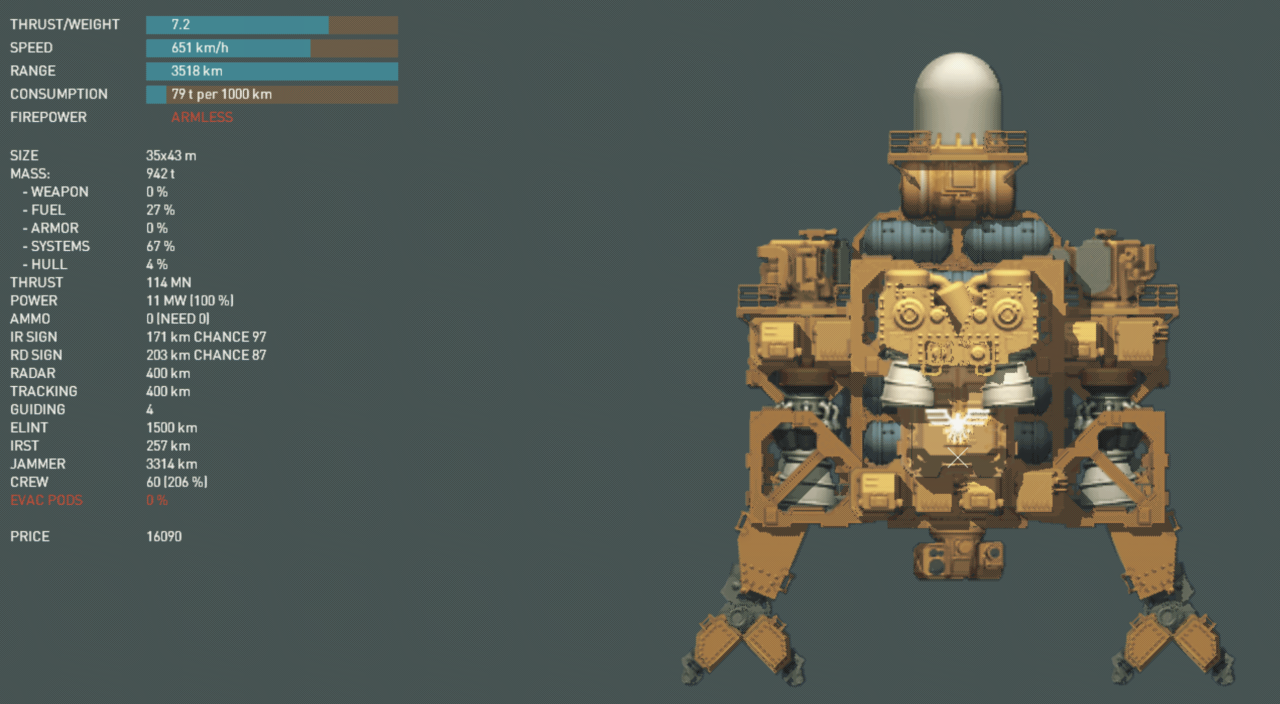 This is the ship we will use to work some numbers. My take on a sneaky early warning and scout ship.

There are three ways to get detected. Visually, through Radar, and through Infrared.

The IR signature is the range at which you will show up on enemy IRST. That’s a hard number, no ifs ands or buts. Same thing with the Radar signature. Remember however, that the modules in game have a hard cap of 750km Radar and 300km IRST.

Also note that when you land, radar range is cut severely. I think it hard caps at 360km. So that’s why if you flew say 500km of a strike group town with your Sevastopol, they didn’t immediately spot you!

Okay so that’s all great. What about this CHANCE then?

So here is the trick: Reporting Time Is Not Uniform. I ran some tests and discovered that some settlements took upwards of 35 minutes to report me while I buzzed around overhead, while others did it in 19 minutes or less.

So if this ELINT ship attacks an enemy garrison with no radar or IR at high noon, it has to cover 100km of ground before the enemy sounds the alarm. Considering it can cross 100km in 9.2 minutes, it is almost certain to succeed.

Note however that it has a 97% chance if there is IR detection present, and only 87% chance if Radar is present. Consider the same equation for Radar:

So if the clock starts when I am 203km away, if the garrison reports under 18.7 minutes, then I don’t get a sudden strike! This implies that 87% of the time, a garrison will NOT report faster than 18.7 minutes.

Considering that gives me a 97% chance of success, we can start to see a minimum threshold of around 15 minutes starting to appear.

But wait a second. I just got reported instantly! What gives huh?

There is a second mechanic in play that explains why you get insta-reported. (Aside from your racist behavior ofc)

Imagine if you will, a backwater settlement garrison, spotting your ship visually 100km out. You see the green timer bar, the signal ripples appear. However, you suddenly notice you screwed up and sent your ‘Armless little ELINT ship to fight the garrison! Before unpausing, you turn the ship around and send it back into the wastes, before sending your badass super corvette in to smash face.

Except when that corvette passes into visual range, you just get insta-reported. And now the strike group in the next town over is on its way, preceded by a few cruise missiles for good measure.

I haven’t confirmed this yet, but I think the same mechanic happens when attacking merchants (who likely have IRST) or Strike groups (which have IRST and Radar). You have already triggered their report timers by passing into IR or RD range, and then when you show up visually that’s when they put the report out!

Some other Interesting Things

You may not know but Radar can’t detect grounded targets!

Also your IR signature is quartered when you land!

So a good strategy to hide your strike group from an enemy counterattack (which you need to do because you didn’t read this guide and failed your Sudden Strike) would be to get at least 100km (probably 150+ to be safe) from the last spotted position, turn off your radar, and get your ass on the ground.

Unless your IR signature is over 400 (which it probably is), you would only be able to be detected visually.

Thanks to Igawa for his great guide, all credit to his effort. you can also read the original guide from Steam Community. enjoy the game.