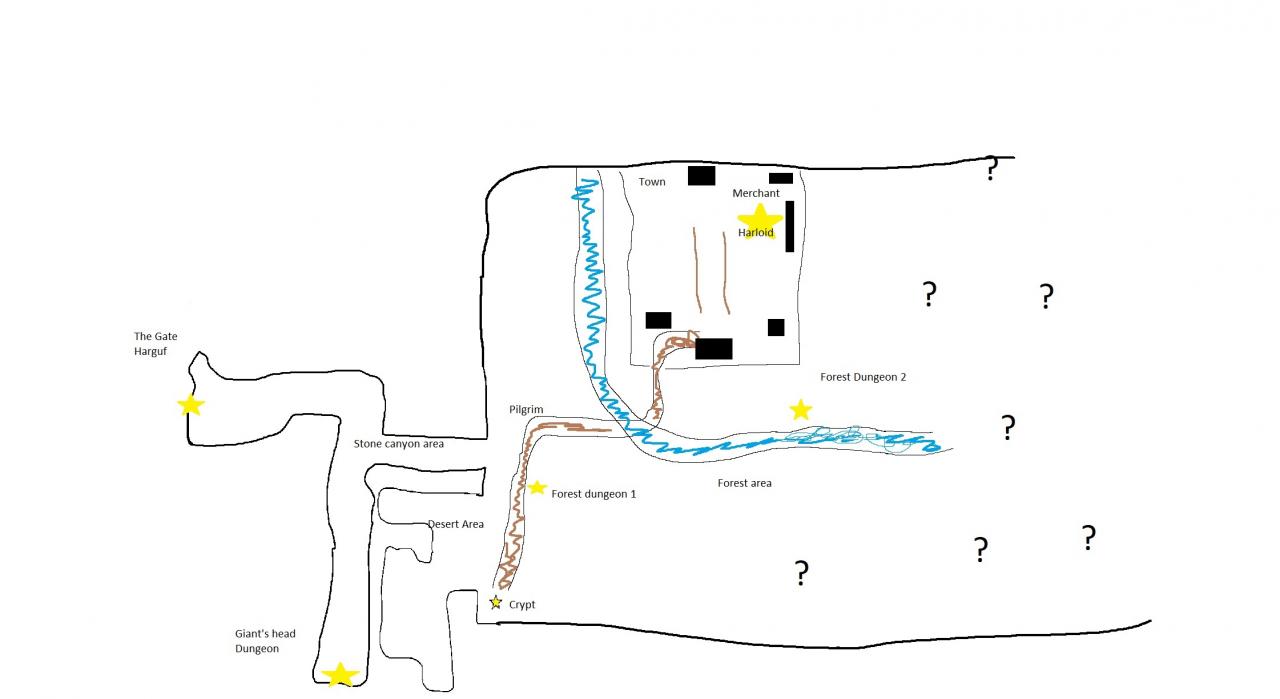 This is a poor quality map I drew in MS paint. It is not to scale or anything, but it does illustrate the key points you’ll want to be familiar with for playing and exploring Hyforge.

1.) You begin in the Crypt. This is also where you will be “respawned” upon death. There is a chest directly behind the crypt building.

3.) The Gate is what the name implies. A giant gate. Harguf is a named character who can be found standing around the gate with a handful of other NPCs. He eludes to upcoming story content when you speak to him.

4.) The pilgrim is basically the sole source of direction so far. She tells you to stick to the road (brown path) in order to reach the town.

5.) The town is full of NPCs who elude to other story content. Beyond it, you can see the ship they mention off in the Ocean. Harloid is a merchant that will buy your excess items and sell you spells, weapons, armor, and consumables.

6.) I have yet to explore the eastern parts of the Island

The world of Hyforge is pretty big. I encourage you to run as much as possible in order to level your athletics skill asap. This will increase your maximum stamina, thus allowing you to run for longer. Be careful however of running in dungeons. The most common way I have taken damage in dungeons is by running down a hall or around a corner and being caught by a monster’s attack.

In the current build, you can walk/run up a lot of the mountains and hills you would not expect to be able to. There are some very sheer walls that wont let you climb them, like in the Stone Canyon area. It helps getting around and exploring to do this.

You’ll find a great deal of armor during your dungeon runs (Giant’s head has a ton of chests in it,) so don’t worry about buying any. However, I haven’t ever seen a shield drop in a chest, so you may need to buy one from Harloid if you want to use one.

–Enemies:
I have encountered five different enemy types so far:

Zombies: Humanoids. Slow movement and easy to kill. Found in the Crypt area and in all dungeons.

Skull-Crabs: Hermit crabs that use skulls on their back. Crouch by using CTRL to hit them effectively. Found around the river outside of town, and in both Forest dungeons.

Rats: It had a name. Seriously though these things are very aggressive and in packs will kill you. Make sure you crouch and don’t let them surround you.

Werewolves: Big hulking bipedal Wolves. Surprisingly timid and easy to deal with. Maybe they’re peaceful and I’m the bad guy for attacking them.

Combat
This is really just a placeholder for now, until the mechanics of the game are fully fleshed out and tightened up. As of right now I can say that the basic iron sword is my favorite. With good positioning it is capable of hitting multiple targets, has a good attack speed, and doesn’t take up a ton of room on your screen. There are a surprsing number of weapon options though, and they are for the most part all very cool looking (The Oak staff in particular) and have cool attack animations.
By Big N’ Deezl

If you don't know what foils are or haven't seen them in the game you should turn back now. Otherwise, this is a guide about numerous...