What Idols’ stats mean, the demographics they appeal to, and the importance of building a targeted fanbase.

I’m sure most of you reading this have done at some point what I also did the first time I played Idol Manager;

You started an audition and the first thing you do is look at the Idols’ overall stat level, and then looked at the various stats and went “she seems well-rounded, not weak in anything, I’ll hire her.”

This is where you, and myself, started the long painful path of Idol Group Mediocrity. You try to appease everyone, so you appeal to no one. Guess what, that Idol you hired that is just as good at vocals as she is at dancing? Well, your male fans don’t really care that much about vocals, they just want to watch idols dancing. But hey, at least your female fans appreciate it. How good your Idols are at Dancing and Vocals isn’t just a generic stat that effects the quality of your songs and performances. Each stat appeals to two specific demographics. You’ve probably noticed that different genres, lyrics, and dances appeal to different demographics, it is conveniently shown to you when you are deciding on your next single. Stats work the same way. 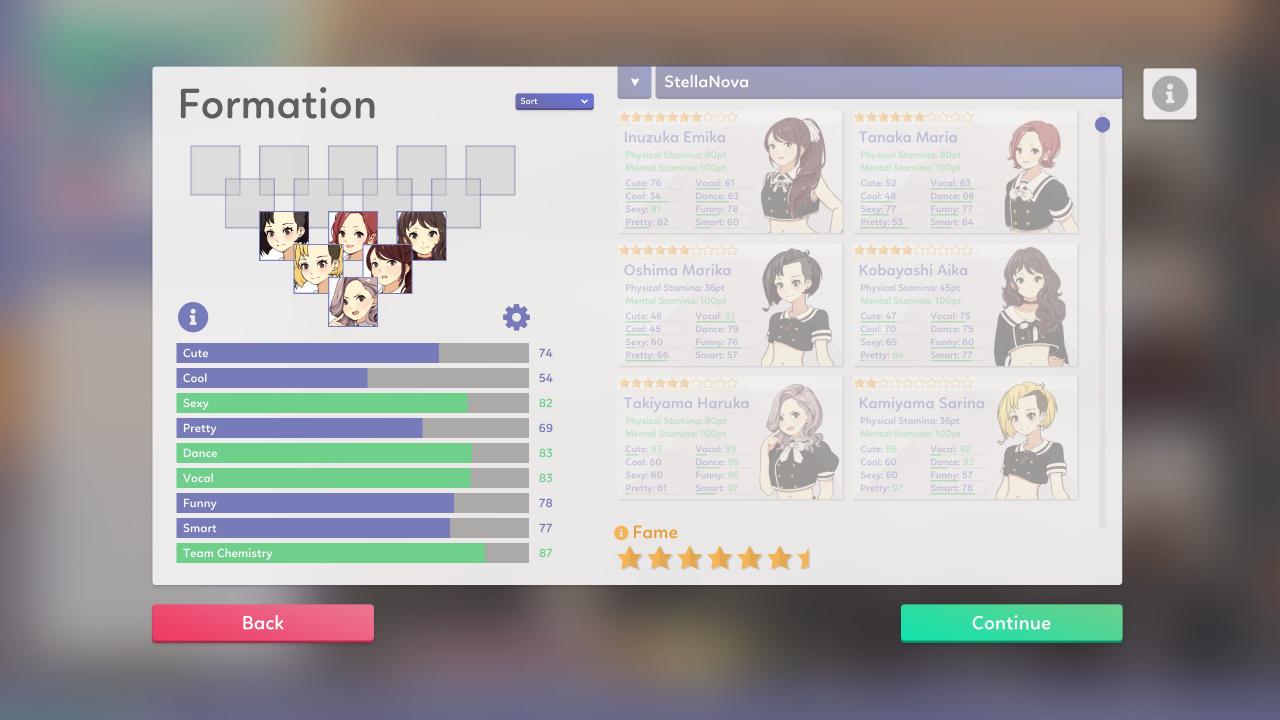 (If you are wondering, the idol outfits are from Graphite’s Punk Rock Outfits)

The 8 stats of your idols combine in their formation, along with chemistry, for a group stat. Now the exact formula isn’t entirely clear, but it is basically an average of your group’s skills, weighted in favor of the skills of the girls closer to the front of your formation. That is why having a highly skilled girl in the front of your formation has a much higher impact on your group stats than putting her near the back of the formation. This is why you also don’t want to just grab as many idols as possible, because the stats are based on the ENTIRE group’s stats, not just on the selected idols.

See what happens when one of my weaker idols, Tanaka Maria, whose stats are below the group’s across the board, is removed from the formation; 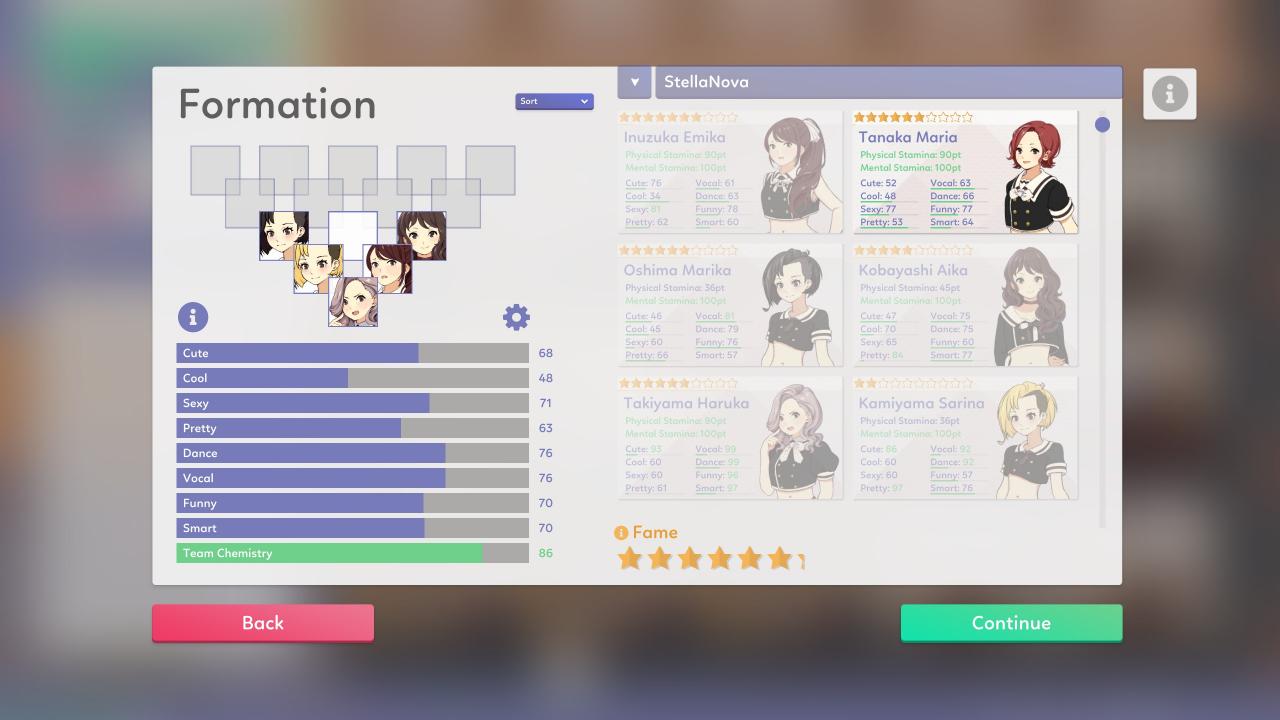 As you can see, even though her weaker stats have been removed, the group stats have actually gone down, rather than up. This is important! This is why you don’t just hire any idol you see, but focus on quality audition candidates who are in line with your current group’s abilities. I know some people have stated that you should focus on having as many idols as your contract generation can handle, and while that does assist in a contract-focused game style, it will dilute the appeal of your performances and thus lower the success of your singles. Singles will start to outpace your contract income pretty drastically after a few months, especially on default difficulty, and failing to improve the stats of your idols will have long term repercussions.

This is also a prime use case scenario for the often misunderstood sub group feature. Using a sub group for new idols whose training has not yet been completed, and then graduating them to the main group once they are of sufficient quality is the primary way in which you maintain a high-quality group while also preparing to replace your A-Listers when they graduate. Also remember, more idols in a group is not necessarily better! A small 5-girl group can perform as well as a full 15-member formation, but the stats of each individual girl have a much higher impact.

Individual Stats and Their Demographic Appeal
Alright, now to the meat of the issue; what each stat means for you.
Demographics

First, a quick reminder of what demographics there are, organized into mutually exclusive groups;

Using Stats to Build a Fanbase

Now that we know what demographics each stat appeals to, we can use that knowledge to build a specific fanbase that will maximize the effect of our total fan count. On default difficulty, the majority of your fan count will probably come from your daily promotion activity. On Unfair difficulty, you will find that is not going to be the case. On normal difficulty, the 4th level of promotion, which is easily attainable early on, gives 350 fans per use. On Unfair, it is only 200 fans, almost half the amount. Furthermore, due to the increased financial difficulty, you will have to squeeze ever more money-making activities out of your idols, through contracts and performances, and often find that you simply don’t have the time and stamina to spend on promotion. As such, squeezing every bit of efficiency out of the fanbase you do have, and growing your fans via singles is vital.

You can choose your genres, lyrics, and choreography to appeal to a specific group, but if your idols don’t match that demographic appeal, its not going to be as effective. Essentially, your singles choices add to the stats of your idols for a combined total. This means, at the start of the game you have two options available to you. Either you choose a style you want and find idols that fit that style, or you start auditions and build your style around the stats of your first good choices. Neither is inherently better than the other.

If your idols’ stats conflict with your group style (primary genre, lyrics, and choreography), your fanbase will be unfocused and spread amongst the various demographics, as your idols will appeal to one set of demographics, and your style another. You might be thinking, that doesn’t really matter, a fan is a fan, as long as the totals are the same, does it matter? Yes. Your appeal might be spread out, but it will effect the opinions of your fanbase. Your smaller demographics will be happier, but your larger demographics will be less happy. Trading happiness in a larger demographic for a smaller one is counterproductive.

Note: This is not entirely true if you are going for a casual trend-chasing style. If you are swapping your genre, lyrics, and choreography to always appeal to the latest trend, and thus getting the extra new casual fans and sales bonus that comes with that, you cannot afford to be tied to a specific style, and thus it becomes beneficial for you to have a more spread out fanbase demographic.

Lets use an example; 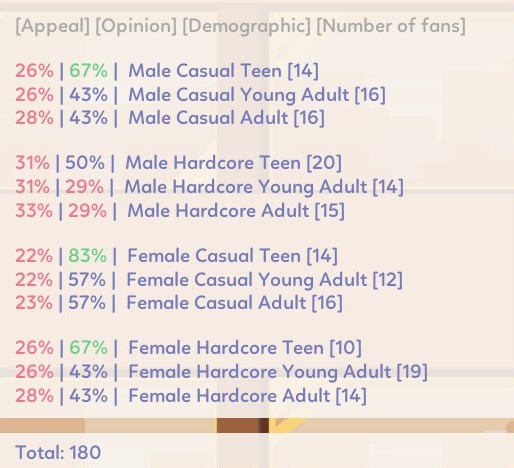 I hired a 13 year old with low stats in everything but cute (72), cool (40), and dance (42). With those stats she appeals to hardcore & males, hardcore & females, and casual & males. So her primary appeal is Hardcore fans and Male fans.

We can deduce why this is. Our first single and the idol herself appeal to hardcore fans, so they are interested. Then we turn around and release a single specifically appealing to casual fans and female fans. the Idol’s hardcore fans, male fans, and especially hardcore male fans are upset by this. We see the direct result of that; Her fanbase is upset. Meanwhile, casual female fans, whom we specifically appealed to, do have a positive opinion, but not by much, only 57%. Obviously, making our smallest demographic slightly happy at the expense of the larger 3 demographics becoming upset with us is not a sound business strategy.

This is why it is vital to identify and cultivate a specific fanbase, and then keep that fanbase happy not only through a fitting group style, but also through individual idols matching their preferences. A casual female adult is not likely to find a 13 year old cute teenager appealing, she will want a smart girl in her 20s who can sing. That same girl would be less attractive to a hardcore teenage male fan. Meanwhile an adult male would likely find both unappealing and prefer a cute & sexy 20 year old who can dance well.

Trying to appeal to every demographic, or demographics which do not correspond to your idol’s stats will lower your fan gain, sales, and concert attendance.

Thanks to Luca for his great guide, all credit to his effort. you can also read the original guide from Steam Community. enjoy the game.