This guide will show you how to play the few secret levels of Infinitode.
This guide requires minor modfication of the game’s .json files through Notepad++

Since you’ve clicked on this guide, you’re clearly interested in finding some interesting levels.
These levels are filled with weird levels the developer has made, for testing… or maybe other reasons.

First off, if you don’t have Notepad++, get it. Modifying the game through the normal text editor can sometimes mess with, or ruin code. At least from my expiriences.

Secondly, you’ll need to go to your steam folder. If you don’t know where this is, simply look it up elsewhere.

Looking for (and editing) the right file

Looking for the right file may be tricky, however, it really isn’t that hard!
You typically just need to know where to go to find the files you want.

To find those pesky secret levels, we’ll need to go to the levels file. 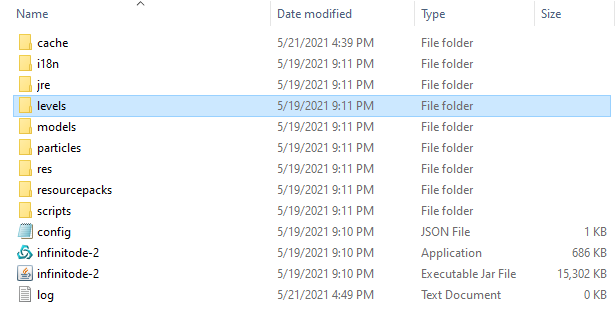 When you click in the levels file, you’ll see a bunch of .json files. We’ll need to scroll to the bottom to find the right files.

The two files we’re interested in are zecred, and sandbox. “everything” is not a playable level, and simply contains… well, everything!

Opening one of the files with notepad++ brings up a single line of code similar to this.

We’re only interested in the starting portion of the code, or the part of the code shown in the picture.
it’s very crucial that you make sure you are ONLY editing the CORRECT values! editing any other text without knowing what it does could cause several critical problems to arise on your game file.

That said, you’ll need to edit ONLY the following values: ‘stage’ and ‘stagePosition’

The exact stage position number shouldn’t matter too much, as long as it is not the same as another stage.

All you need to do to play the stage now, is to start your game! If you had this running in the background, then it will not work. The game reads this file once upon startup, that’s it. (from what I understand of it)

Now you can play the two secret stages of Infinitode 2!
Please note that these stages DO NOT GIVE STARS!
There is ZERO ADVANTAGE for playing these levels!
These are just for fun!