Quick Guide to Combat in Ironseed. 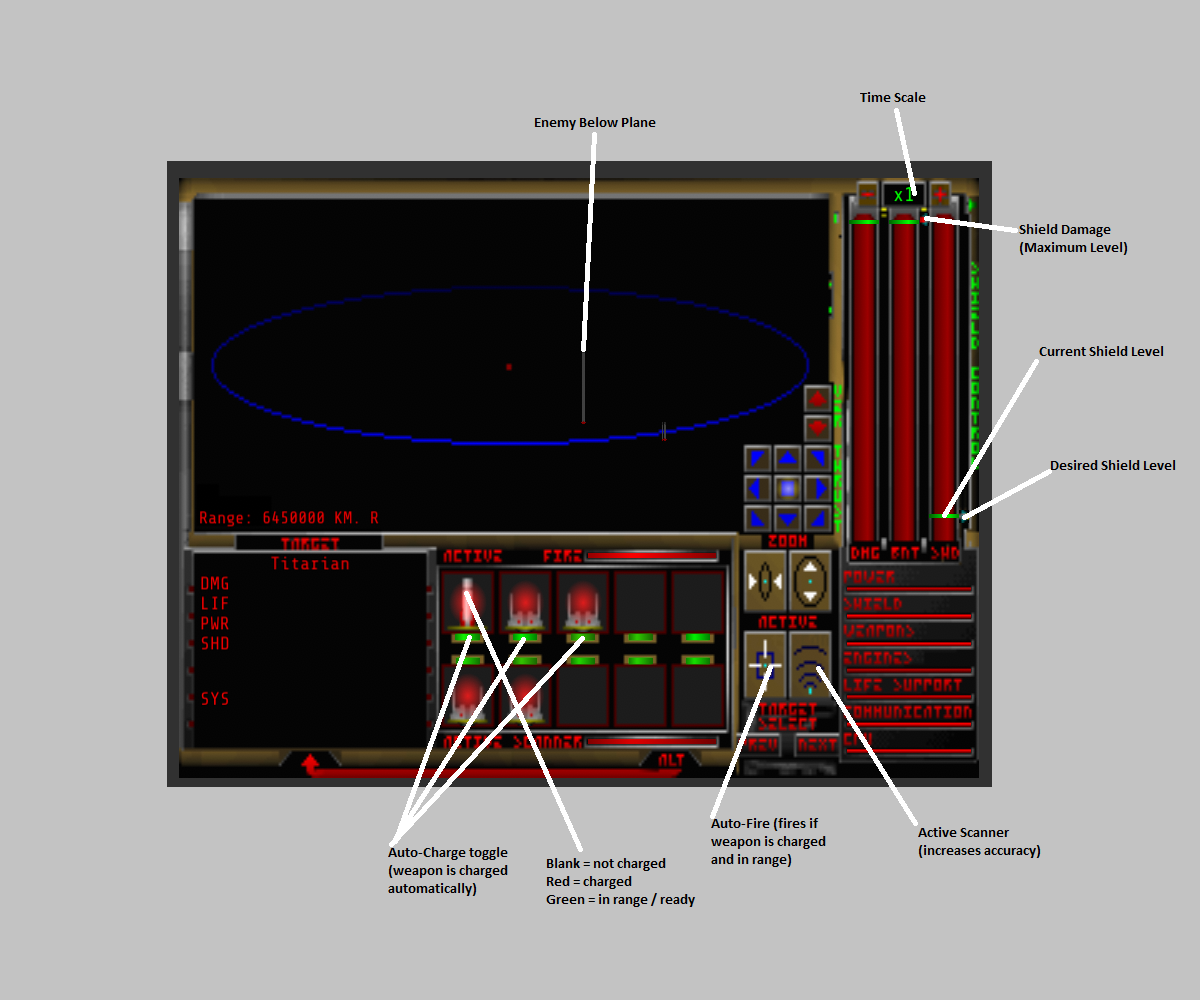 The up/down (Z vector) does affect range when firing weapons.

Use the arrow buttons to control which vector to travel in.

Shield control is made up of 3 values.. the maximum shield level (based on damage to the shield system), the current shield level (what level the shield is currently at and may be moving up or down), and the targeted level (where you want it to be). Reinforced Shields do not have a shield level but more like a certain amount of “hit points”. They do not raise and lower like other shields.

Weapons charge automatically when the Auto-Charge toggle is green. Otherwise the player must click on the weapon to being charging it. Charging a weapon uses Battery power. If there is insufficient power, the weapon will not charge.

Auto-Fire will automatically fire all weapons charged and in range.

Next and Prev cycle through targets. Alt shows a different target view.

Tips and Tricks
Set your initial shield level low so the weapons have a chance to charge up. Some shields drain the battery quickly and should not be used continuously. Raise the shields when enemies get close enough to fire.

Some weapons are better than others. For example, psionic weapons cut right through most shields. Range is sometimes more important than damage.

Multiple shots may be required to cut through an enemy shield. Turn off auto-fire and allow all weapons to charge. Turn back on to fire all simultaneously.

Disable auto-charging weapons that are unneeded or wasting power.

Running out of power can be a bad thing. Weapons won’t charge, shields won’t raise. The big issue is to cut down the shield maximum level by dragging the shield slider on the right of the shield. Uninstall weapons that are unneeded or too weak to be useful such as Dirks.

* Spoilers *
Ochre Embryons are one of the best early to mid-game weapons. They have massive range and do a ton of damage. Shields are completely unnecessary if the enemy can’t get close enough. Head towards the nearest enemy and target it. When destroyed, quickly switch to the next enemy, rinse and repeat. If enemies feel like they are overwhelming you, head away to recharge your weapons. Let them all power up and unlease a large volley at once. Personally I found I could defeat the majority of enemies with 4 Ochre Embryons.
By Bluebeary7