Here is a simple guide for you to learn about the asteroids!

Asteroid
An asteroid is a randomly created celestial body usually in orbit around Kerbol or Dres. Asteroids appear and disappear frequently so that there are always a few scattered around the vicinity of Kerbin. Asteroids first appeared in the game with the release of the Asteroid Redirect Mission update, or 0.23.5. 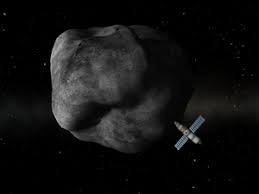 Unlike the true celestial bodies in the game, asteroids are fully under control of the physics system. They can be rotated or accelerated by the application of torque or thrust, and moved into a different orbit or another body’s sphere of influence with correct maneuvering. They do not have SOIs of their own or produce gravity to affect nearby objects; they may not be landed on by craft, stood on by kerbals on EVA, or have flags planted on them, but may be docked with through the use of the Advanced Grabbing Unit.

Asteroids are procedurally generated; each new one is a unique shape and size. The part configuration file used as a prototype for each procedurally-generated asteroid can be found in GameData/Squad/Parts/Misc/PotatoRoid/part.cfg. It is a C class asteroid that can be attached to any spacecraft after editing the part’s config file, allowing it to be under any part category entered.

Some celestial bodies such as Gilly are often referred to as captured asteroids; this is merely an astronomical classification as they are not fundamentally different from the larger moons and planets in the way that asteroids are.

Capturing asteroids
Once an asteroid is captured with the Advanced Grabbing Unit, it is considered part of the ship. It can be renamed when docked, and/or the craft can then use its engines to alter its orbit. This can be used to get it into a stable orbit around Kerbin or another celestial body, or even drop it into the atmosphere and land it. Capturing an Asteroid requires a procedure similar to docking.

The rendezvous is identical to the usual docking- the asteroid is targeted and orbits are matched. Asteroids are frequently found on hyperbolic escape trajectories when encountered within Kerbin’s SOI, which can make the map view more difficult to use to plan an encounter. On close approach instead of targeting a specific docking port the center of mass of the asteroid may be targeted, and the Advanced Grabbing Unit attached to the asteroid’s surface at any point. Perfect accuracy is not crucial because the Advanced Grabbing Unit can be tilted after contact to align the craft’s thrust with center of mass.

The asteroid’s mass can be estimated with the following formula, obtained experimentally. This is only an estimate as the masses of asteroids even within the same size class varies significantly.

Science
Kerbals who fly close to an asteroid during an EVA can take a sample to earn a maximum of 70 Science from each asteroid. Asteroids may be sampled from different situations or even different biomes when the asteroid is landed on a celestial body.
Uses
Capturing an asteroid is a critical part of the Asteroid Redirect Mission scenario, in which an asteroid is on course to impact Kerbin and must be deflected.
Asteroids are also a good source of science, since each new encounter yields additional data.
Some contracts require you to capture a particular class of asteroid and put it in orbit around certain bodies or eject it from the solar system.
Once captured into a stable orbit, asteroids can be converted into space stations by attaching suitable parts to them with additional claws.
Asteroids can be mined for ore, which can be converted into various fuel types for ships.
Destroying buildings at the KSC for fun.
By Dragon