Kerbal Space Program: How to Land on the Mun

Are you completely new to KSP? Do you struggle with making a rocket that can even reach orbit? This guide will help you go from knowing nothing to landing your first Kerbals on the Mun!

This guide will use the Kerbal X to reach the Mun, which is a stock craft included with every version of KSP. This guide will also assume you are playing in a sandbox mode save, which lets you access all of the parts from the start, unlike Science and Career mode which have a science system to unlock parts.
If you can’t see the Kerbal X in your craft list when you click Load in the Vehicle Assembly Building (VAB) ensure “Allow Stock Craft” is enabled in the save’s Difficulty Settings, which is accessed by pausing the game on the Space Center view, selecting Settings, then Difficulty Options.

Select the Kerbal X in the craft list, and load it into the VAB. 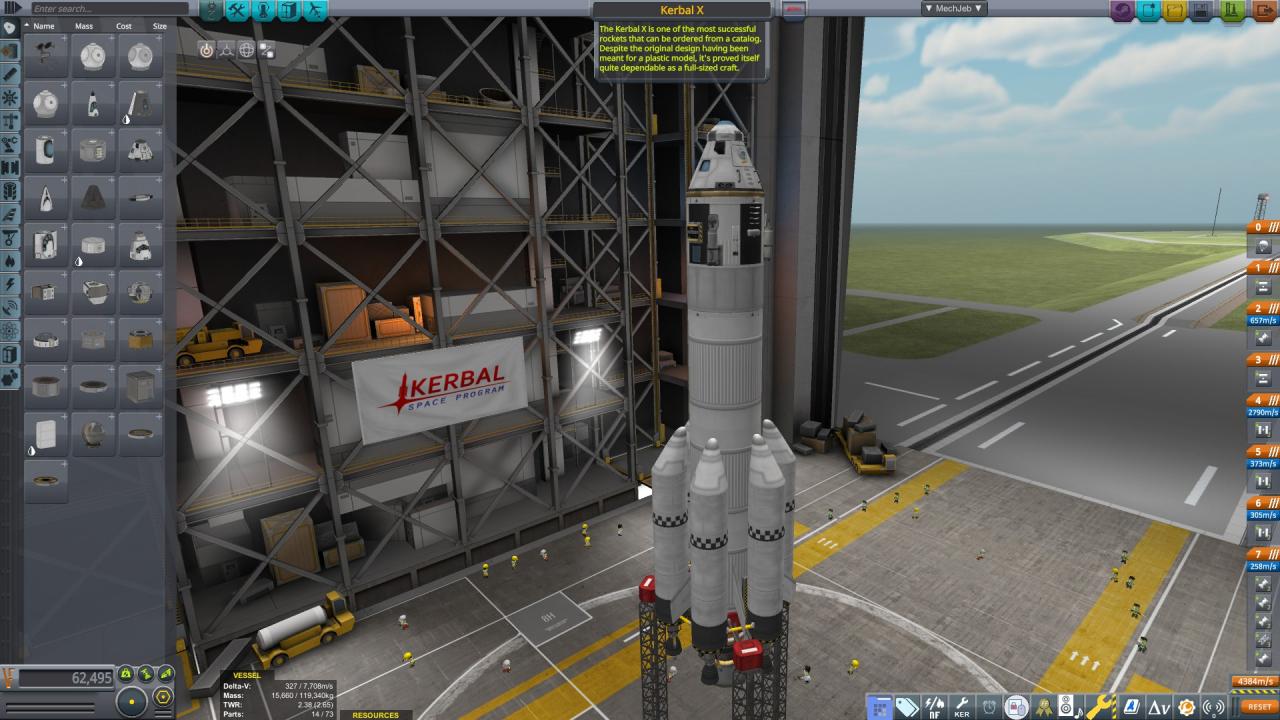 The Kerbal X consists of a lower stage with a Mainsail engine and three sets of two boosters that provide extra thrust and fuel for the main stage. The upper stage consists of a Poodle engine with a Rockomax 16 fuel tank. This tank alone will not be enough to reach the Mun, so add a Rockomax 8 fuel tank right above it by setting the 16 tank off to the side by clicking to detach it, then clicking again off to the side to drop it. Then go to the Fuel Tanks section, find the Rockomax X200-8 fuel tank near the bottom, attach it to the rocket, then add back the rest of the craft. 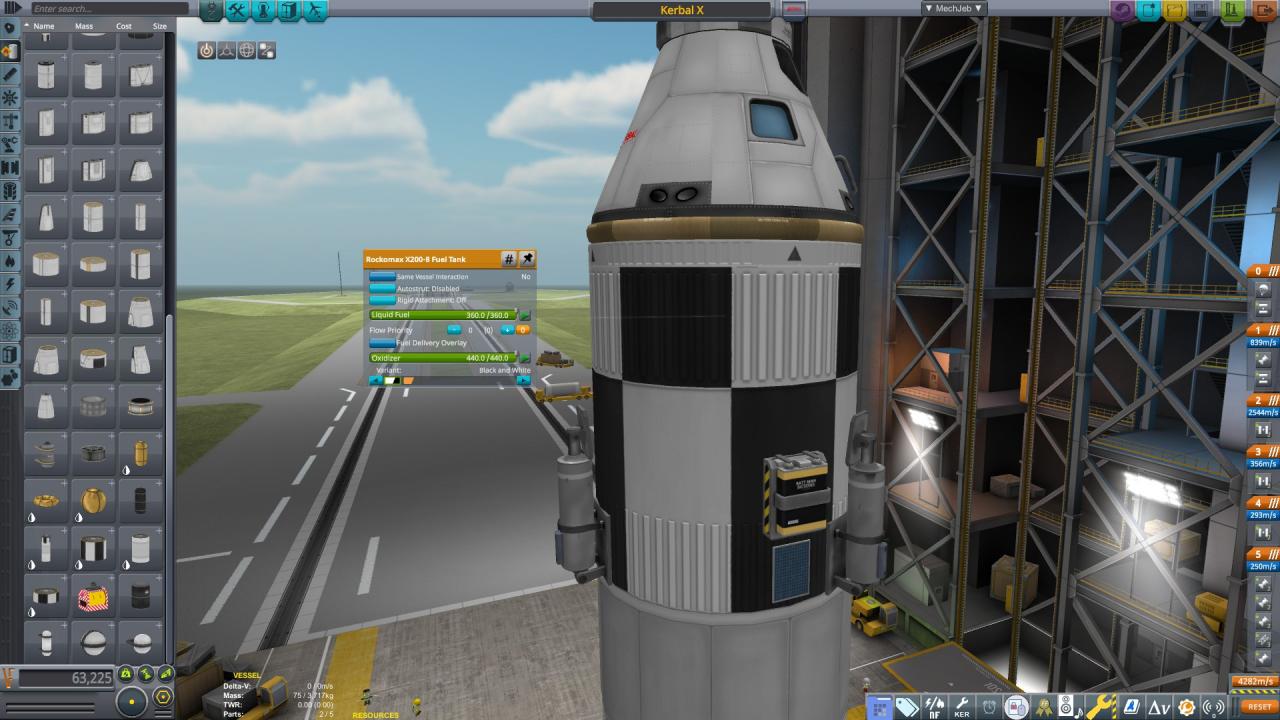 The rocket is now ready to launch, so click Launch in the top right. 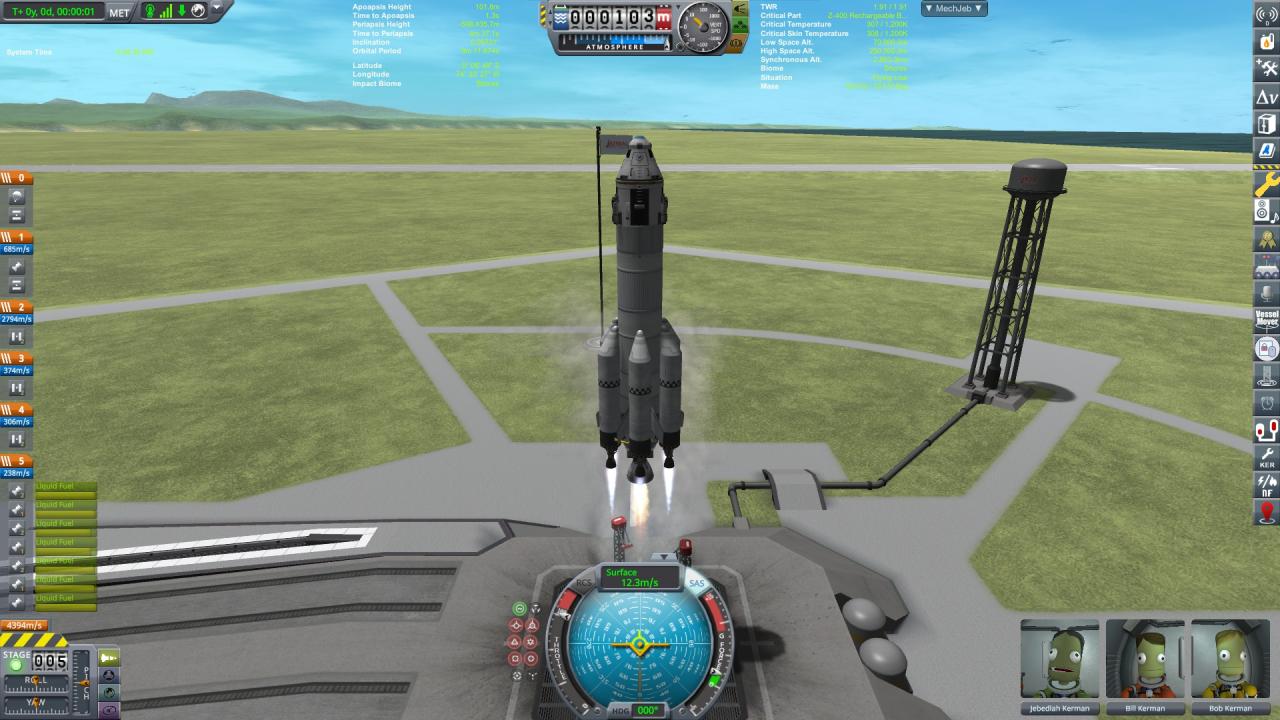 As the side boosters run out of fuel, press Space to discard them. As you ascend, stay upright for the first kilometer, then slowly pitch over by pressing D. When you reach 10 kilometers of altitude, you should be at almost 45 degrees over on the navball at the bottom of the screen, represented by a horizontal line going around the ball. This should happen around the time the final side boosters run out of fuel. 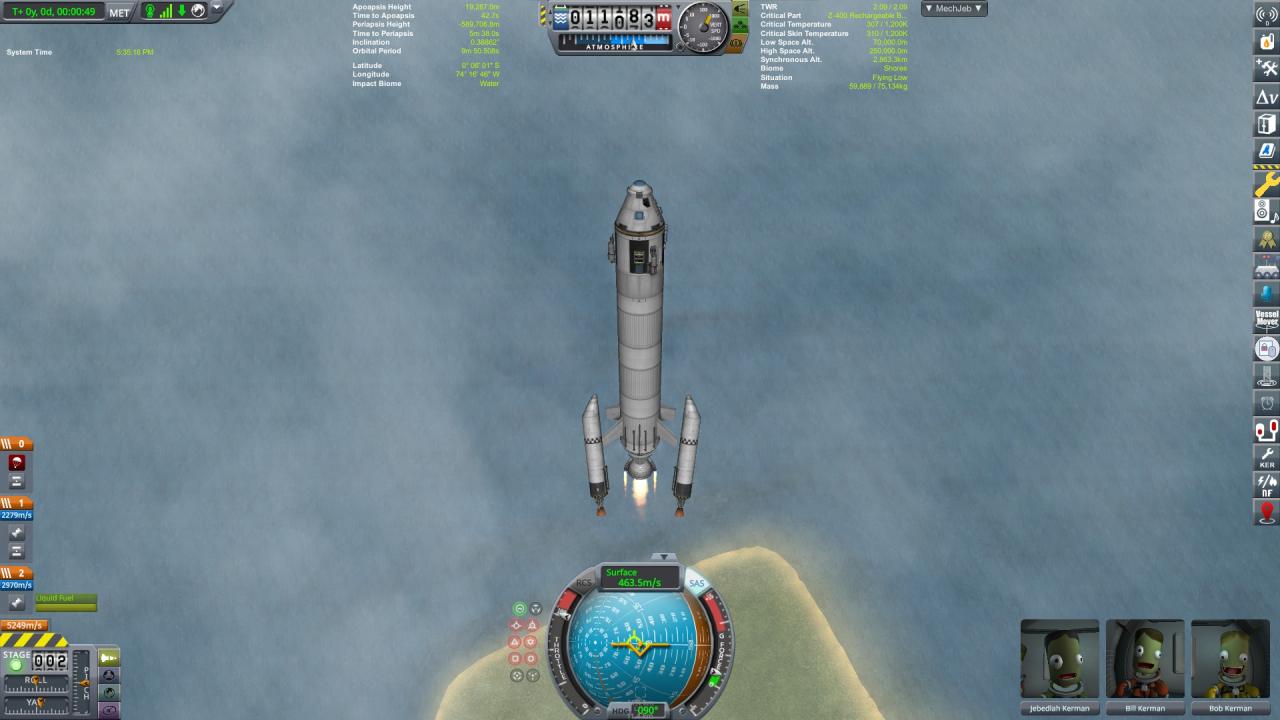 Continue to pitch over until 30 degrees, then hold that position until your apoapsis, which is the highest point of your orbit, is above 70 kilometers, which is where the atmosphere ends. When that happens, press X to stop the engines.

Activate maneuver mode by clicking the fourth button in the bottom left UI to see your apoapsis and periapsis height, as well as the time until each.

Time warp until your craft is 15 seconds away from apoapsis, and press Z to burn the engines, then cut the engines when your periapsis is 70 kilometers or more. The comma key decreases timewarp, the period key increased timewarp, and the slash key immediately stops all timewarp. 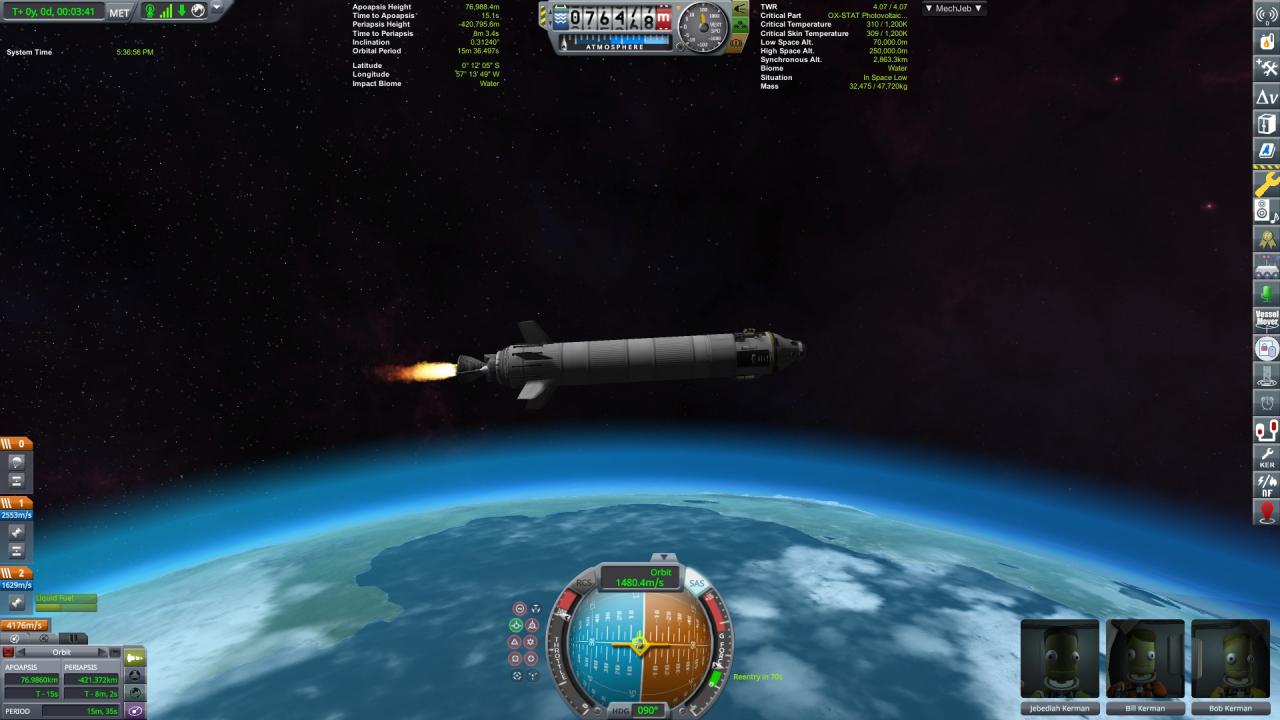 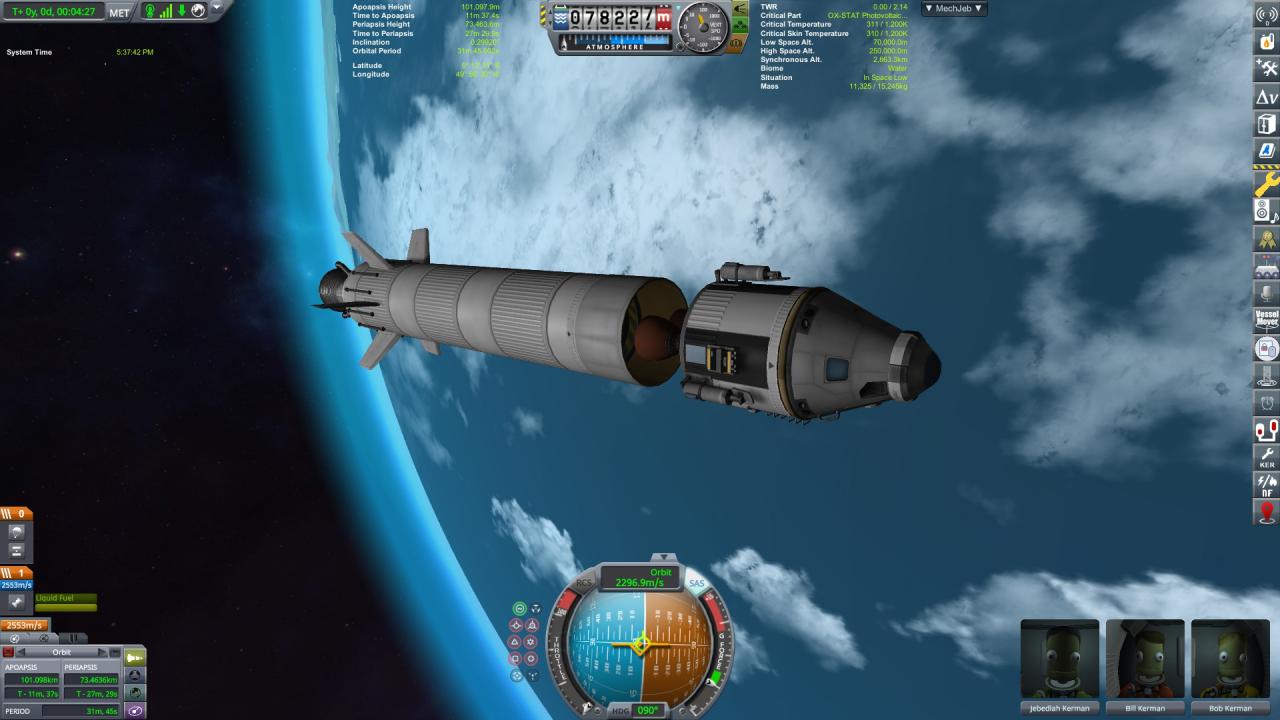 Going to the Mun

Now that your spacecraft is in a stable orbit, press M to open the map screen. Zoom out and set the Mun as your target. Click on your orbit at the angle shown in the image, and create a maneuver node. If the image doesn’t work, angle the map camera straight down with the Mun at the top of your screen, make a line going from the Mun to Kerbin, then rotate the line 90 degrees clockwise, and make the node there. Hover over the prograde icon, the yellow one with the hollow circle, and scroll up until the projected apoapsis reaches the Mun. An encounter should appear with a purple trajectory that has an periapsis around a fake Mun. Adjust the prograde amount until the periapsis around the Mun is between 100 and 400 km. 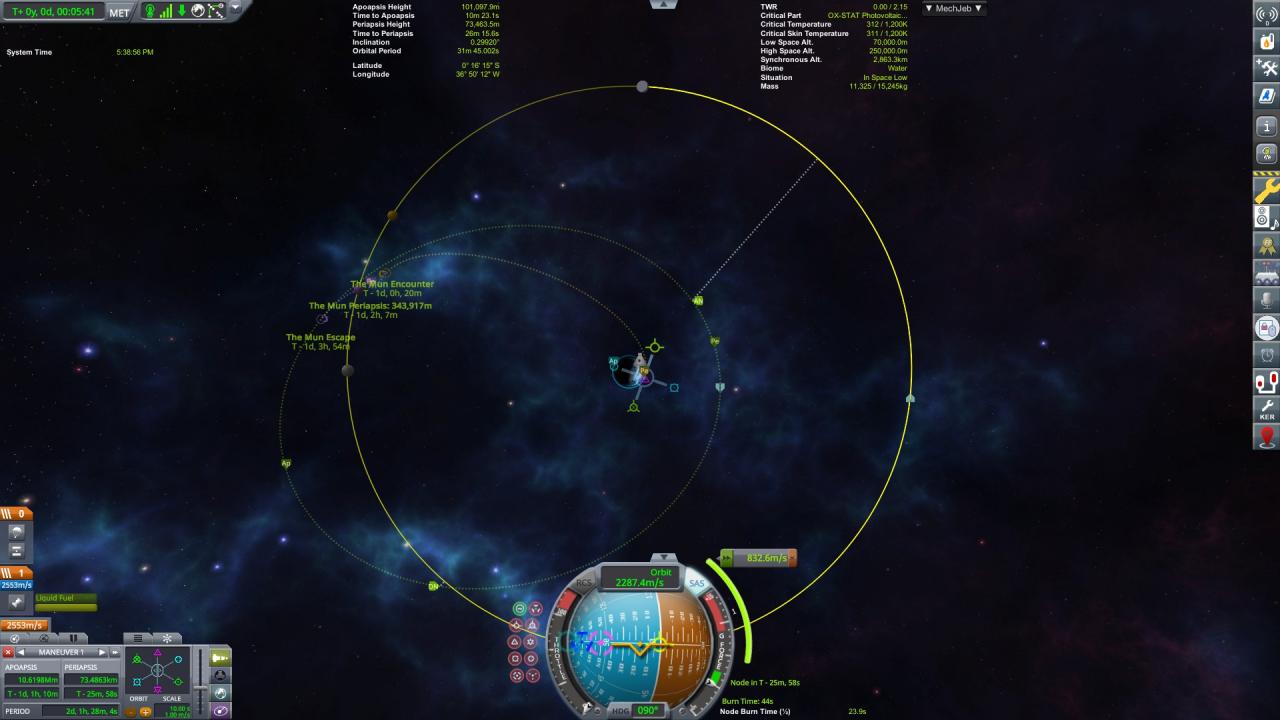 Once the maneuver is set up, click the Maneuver icon on the SAS directions next to the navball. The maneuver button is in the top row, next to normal stability assist. Click the green arrow on the maneuver’s Delta V to warp close to the maneuver. Now would be a good time to quicksave in case things go wrong by pressing F5.
The maneuver will say it will take a certain amount of time to execute, for example 40 seconds. To ensure an accurate maneuver, start burning when the countdown reaches 20 seconds. Mods such as Kerbal Engineer Redux[www.curseforge.com] can provide this time for you, as seen in the screenshot. 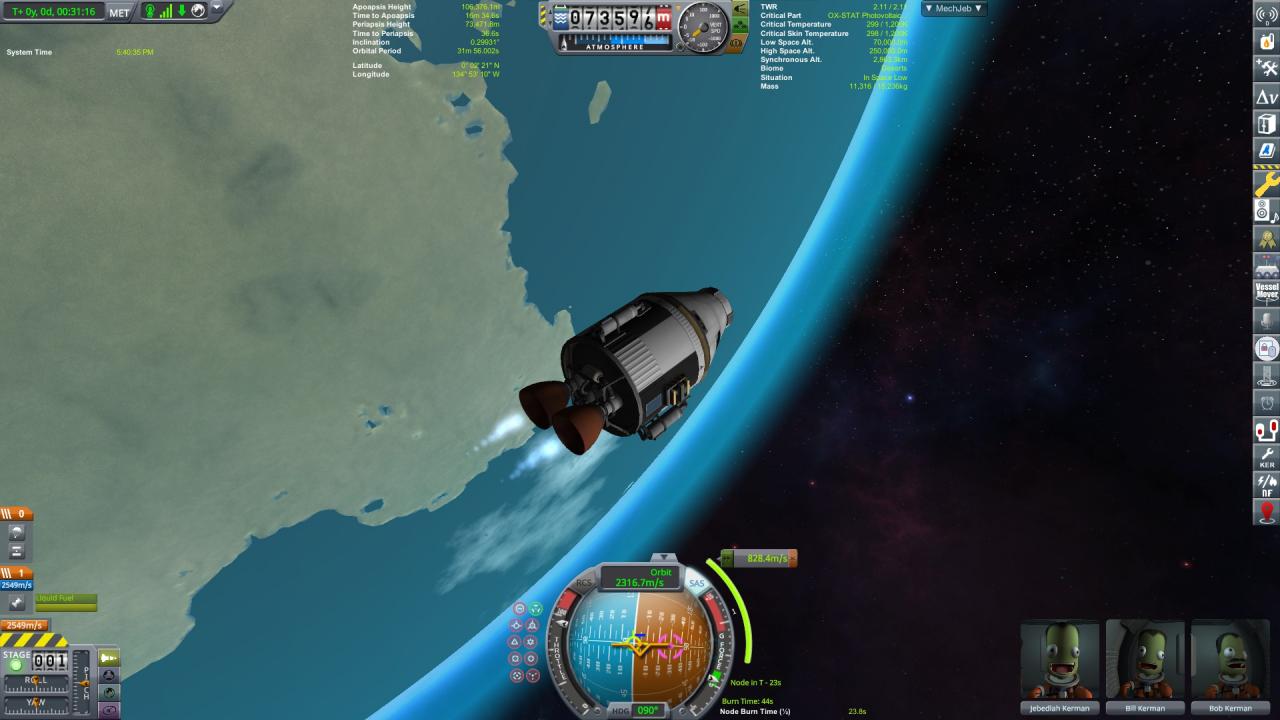 Continue to burn until the Delta V countdown is close to 0 m/s, then cut the engine throttle and click the check mark where the X once was on the dV. You can throttle up and down slowly with Shift and Ctrl for more precise control. On the map, your apoapsis will rise as the engine burns, slowly matching the predicted path of the maneuver node. Your trajectory should now pass by the Mun. 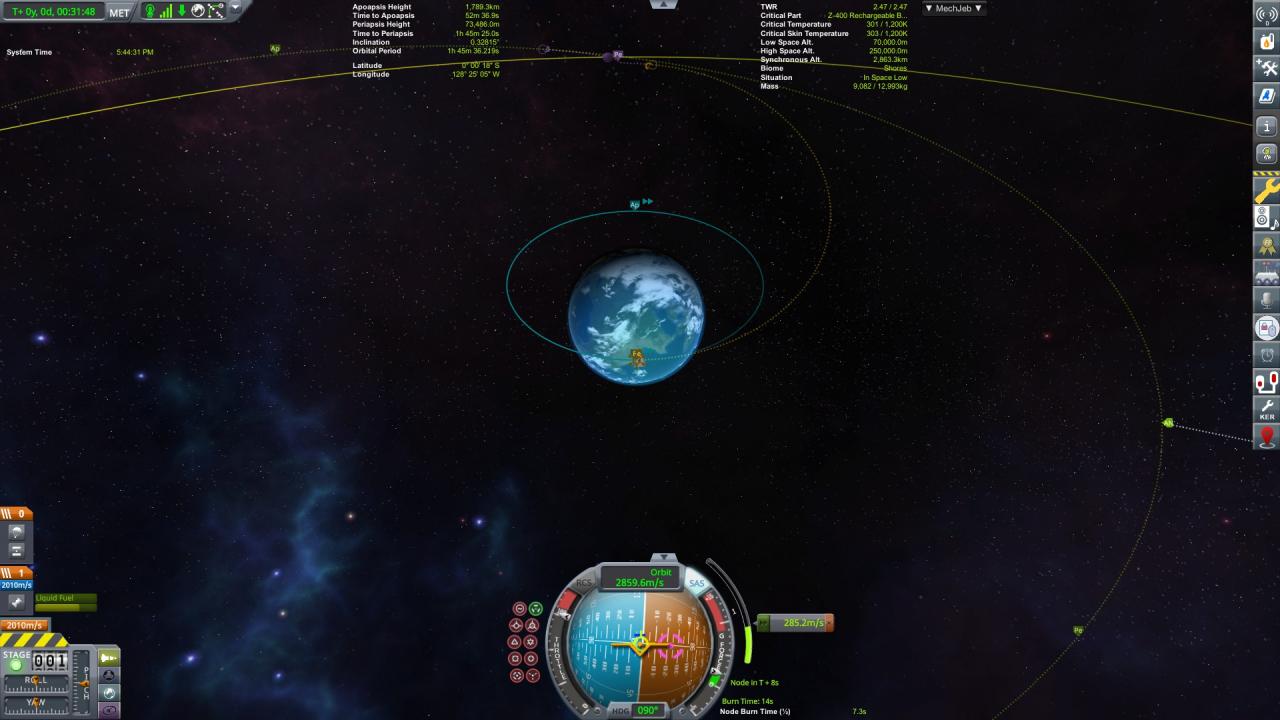 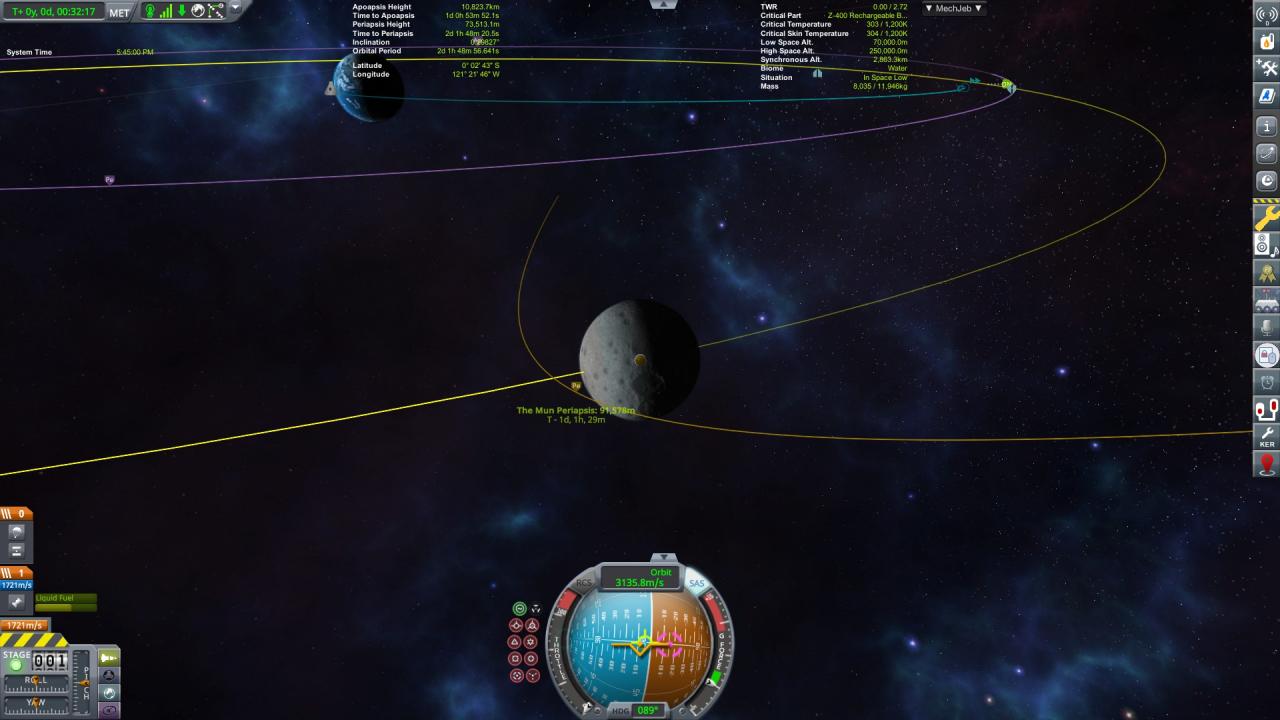 Time warp until you are in the Mun’s Sphere of Influence (SOI). The orange predicted orbit past the Mun should now be blue. Create another maneuver node, this one on your orbit’s periapsis. Scroll on retrograde this time, opposite of prograde until your predicted orbit is a circle around the Mun. 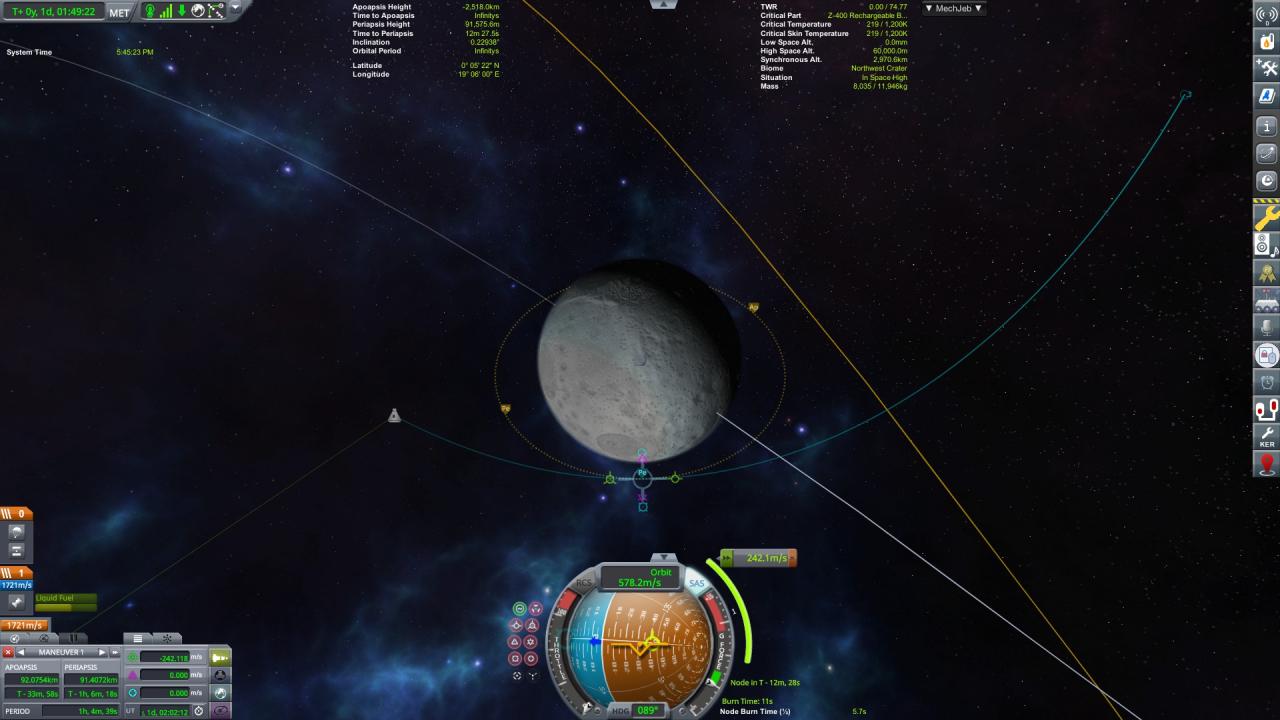 Execute this maneuver the same way as the previous one. 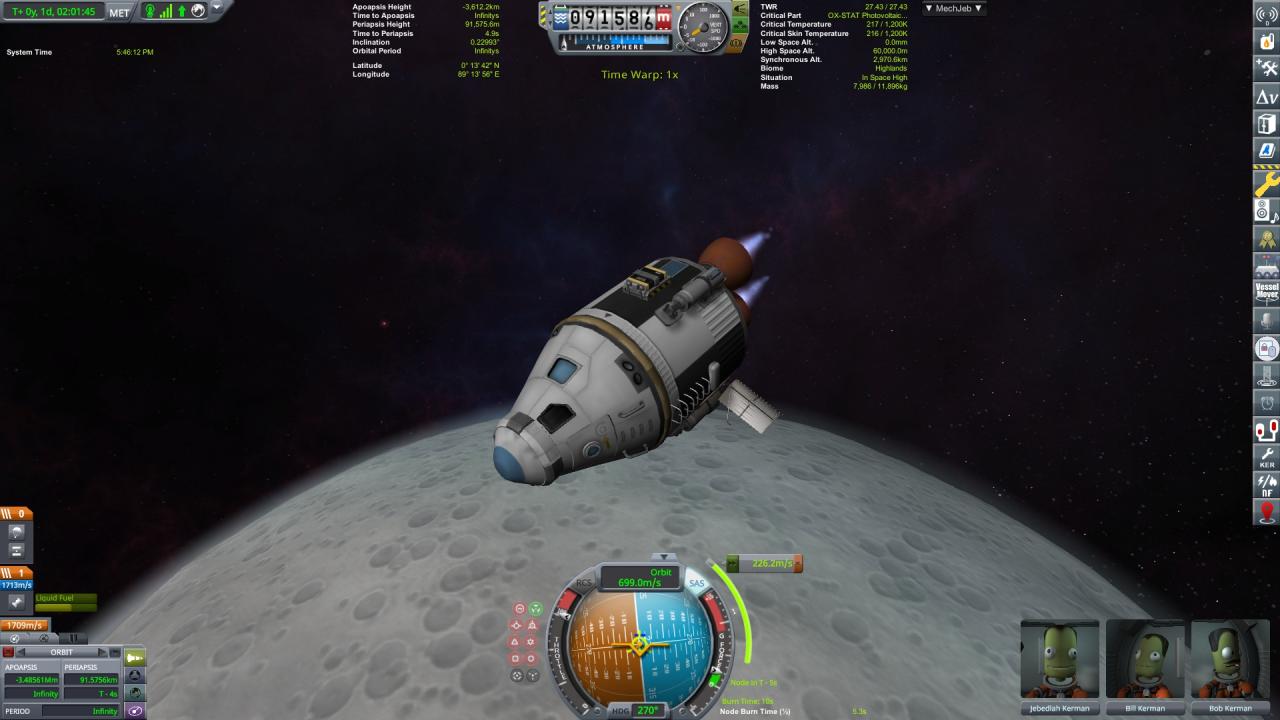 Now that you are in Munar orbit, you will need to land on the Mun. Create a maneuver anywhere on your orbit, and add some retrograde velocity so the predicted trajectory goes into the ground, but not too steeply. Additionally, make sure the predicted landing spot is on the bright side of the Mun, because landing in the dark is much harder. If you are aiming for a precise landing spot, you can add some normal or antinormal velocity (the purple triangles). 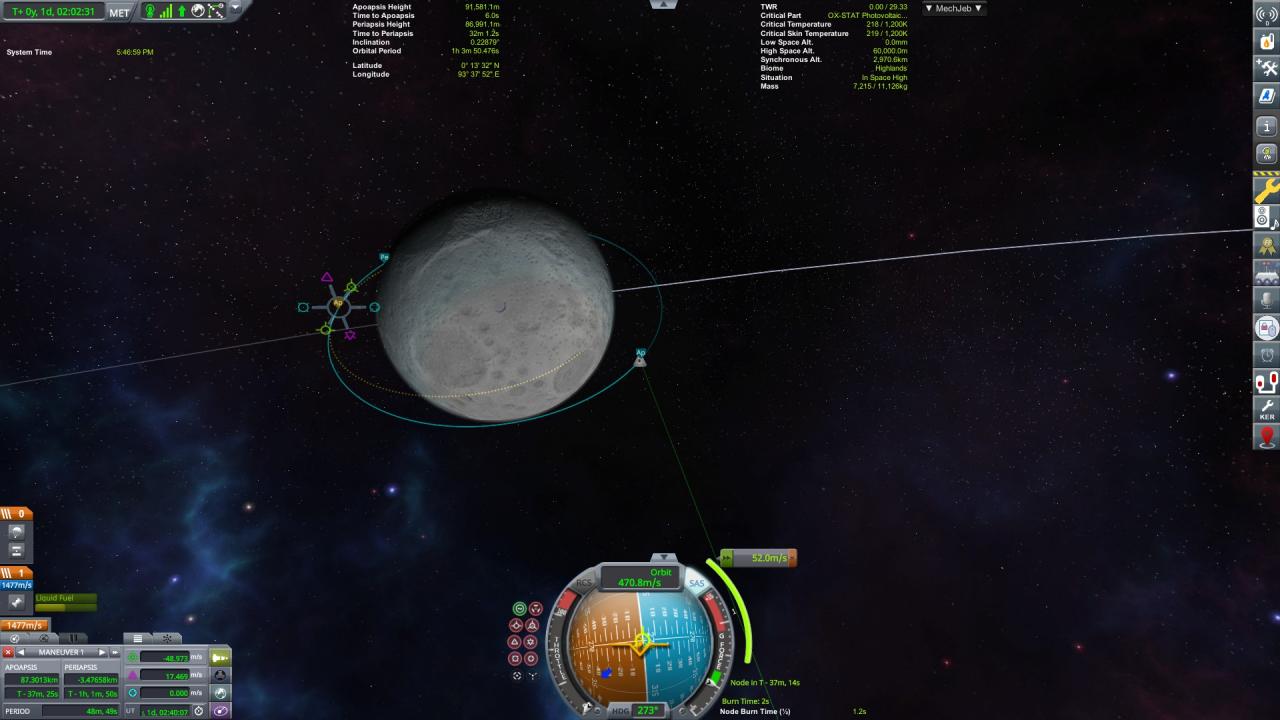 Execute the maneuver, then quicksave with F5. Press G to deploy the landing gear, and time warp until you are a few thousand meters above the surface. When you are getting close to the surface, point retrograde using SAS and set throttle to max until your speed gets close to zero. If you start too late, hold F9 to revert to the last quicksave. If you survived, throttle up slowly when very close to the surface and cut throttle when you land. You want to land at 5 m/s or lower.

If your craft is in one piece, congratulations! You have landed on the Mun! 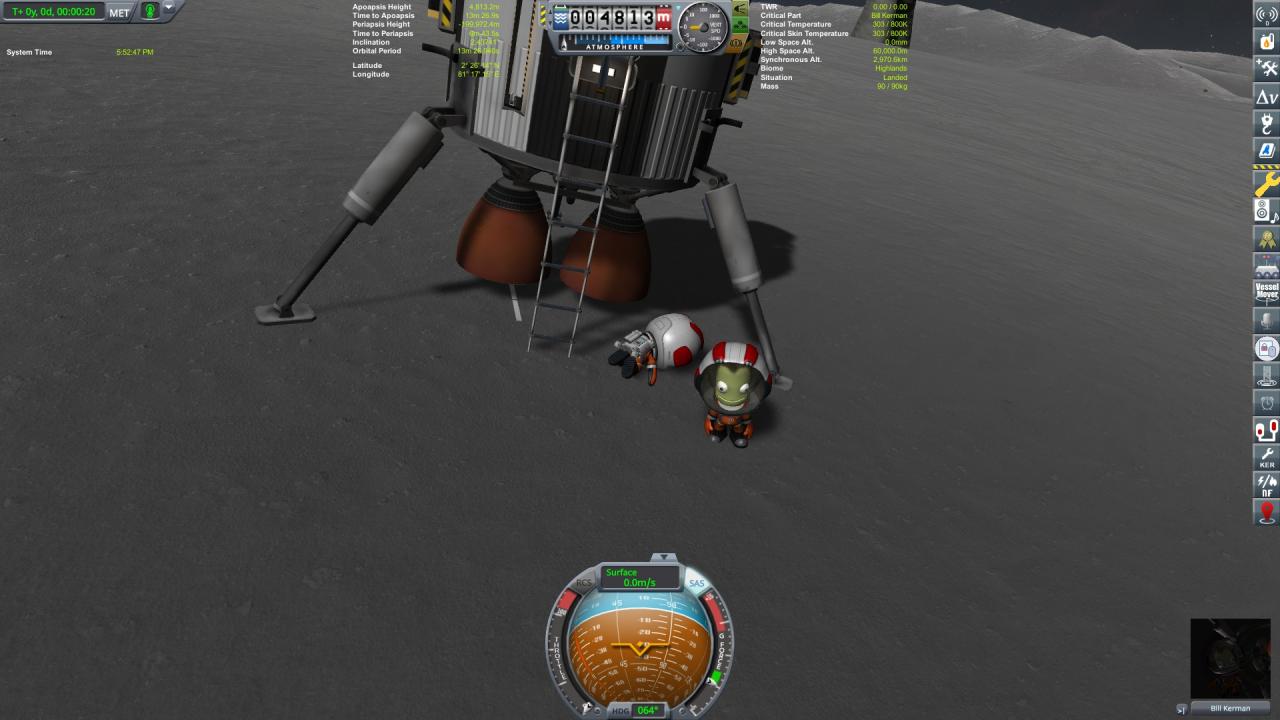 From here, you can explore the Mun’s surface by going on EVA, or extra-vehicular activity. Hover over a kerbal’s portrait in the bottom right and click EVA. Use [] to switch between active craft, including kerbals, if you want to get the rest of your crew out. You can plant a flag by right-clicking on a kerbal while controlling it, and selecting Plant Flag. You can also fly around by pressing R to activate the kerbal’s jetpack. When you’re done, jump or fly up to the command pod’s hatch, grab the ladder with F, and press B to re-enter the craft. 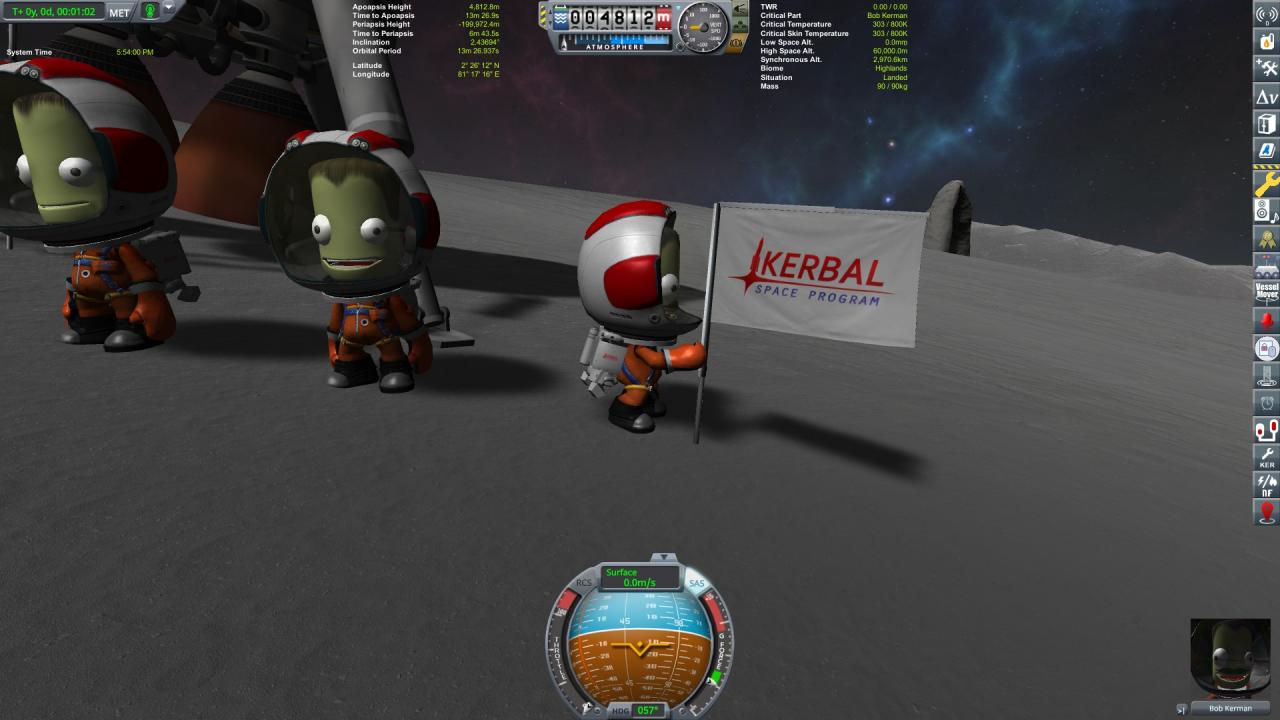 Ascending from the Mun is much easier than ascending from Kerbin. The Mun is much smaller and has no atmosphere in the way. Immediately after taking off, pitch over to 30 degrees and make sure you’re facing east, or 90 degrees longitude on the navball. Keep going until your apoapsis is between 20 and 50km, and cut throttle. Coast until around 10 seconds to apoapsis, and circularize using a maneuver.

If you have at least 300 m/s or more DeltaV left, you can return to Kerbin.
You’ll need to make another maneuver, so open the map. Aim the camera straight down and align Kerbin at the top of your screen. On your orbit, make the maneuver around 45 degrees right of the point closest to Kerbin, and drag prograde until your Kerbin periapsis is between 50 and 25km. Execute the maneuver like the previous ones. 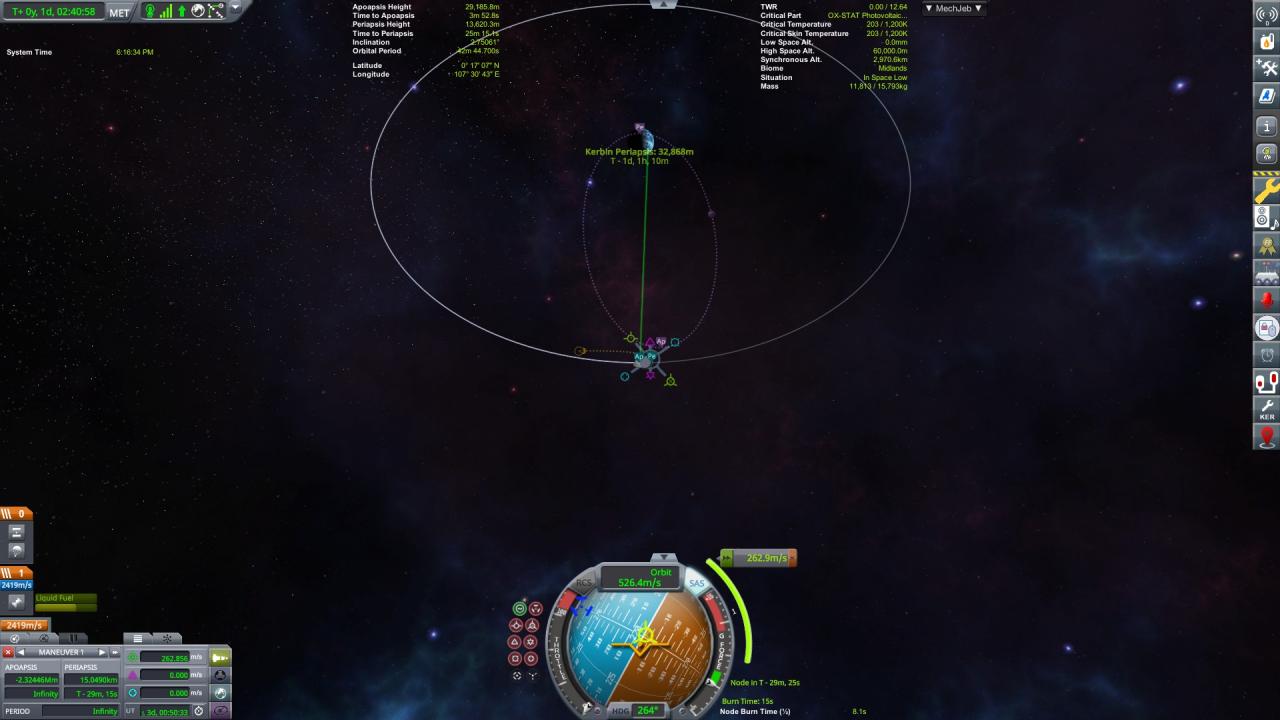 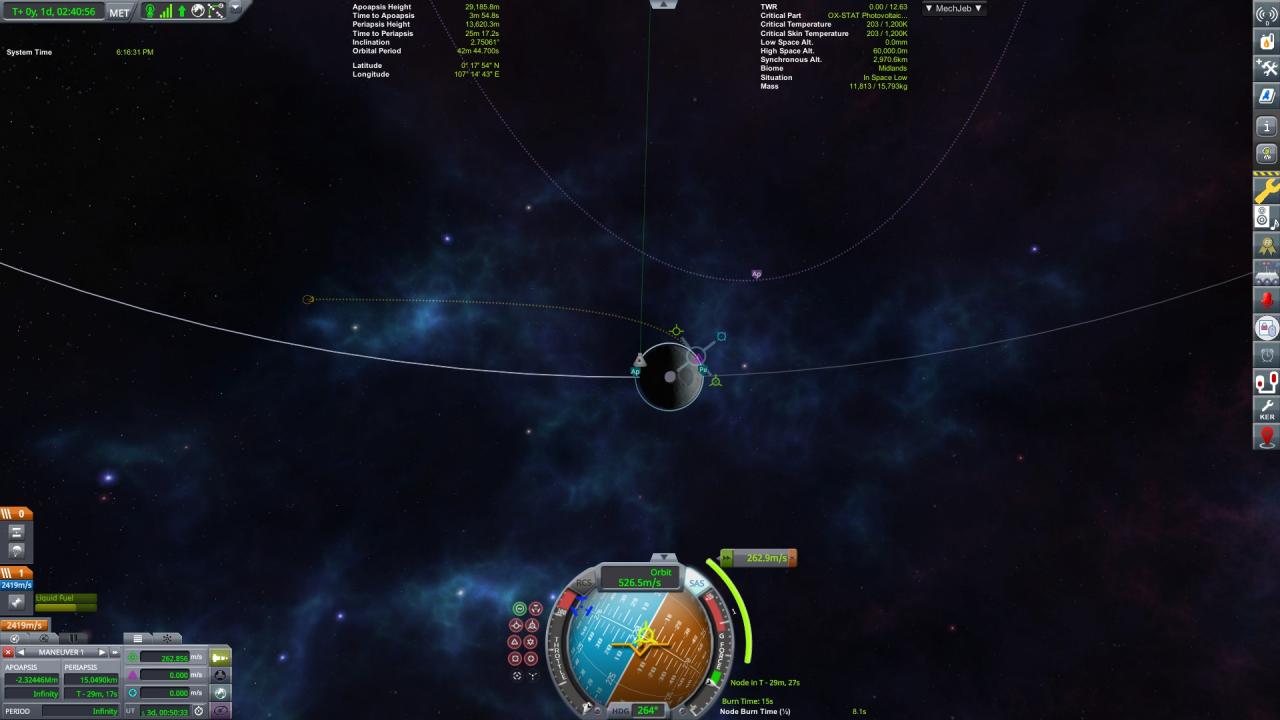 Your craft is now heading towards Kerbin’s atmosphere, which will slow it down enough to land. Time warp until right before you hit the atmosphere, and decouple the last stage, then stage again to ready the parachute. Aim retrograde and wait as your command pod descends to the surface. Once you’re on the surface, hover over the top of the altimeter and click Recover.

Things don’t always go right in KSP. In fact, things will usually go wrong more than they go right. However, you can send a rescue mission to pick up your kerbals and bring them back safely. 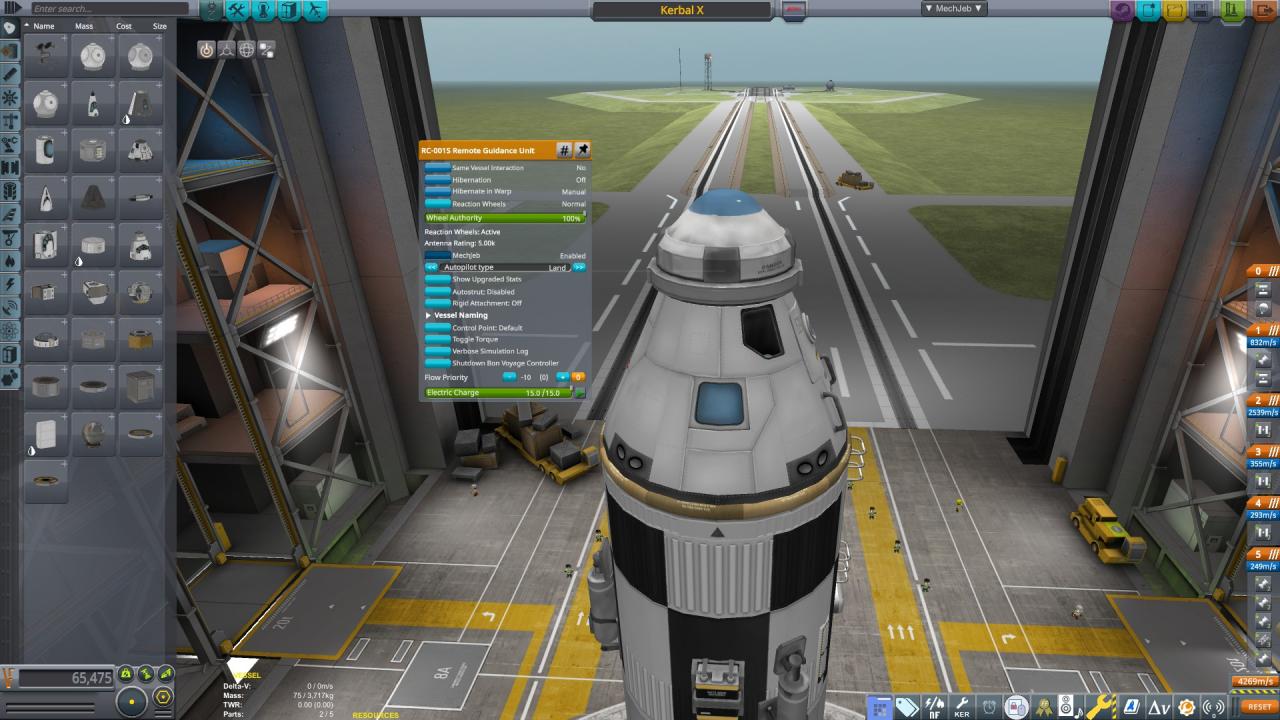 Enter the VAB and load the Kerbal X from before. It’s going to need some slight modifications to be able to bring back all 3 kerbals. Temporarily place the parachute off to the side and grab an RC-001S Remote Guidance Unit from the Pods tab, and place it on top of your rocket. Add back the parachute, and go into the Crew tab. Ensure no kerbals are in the command pod, then launch. 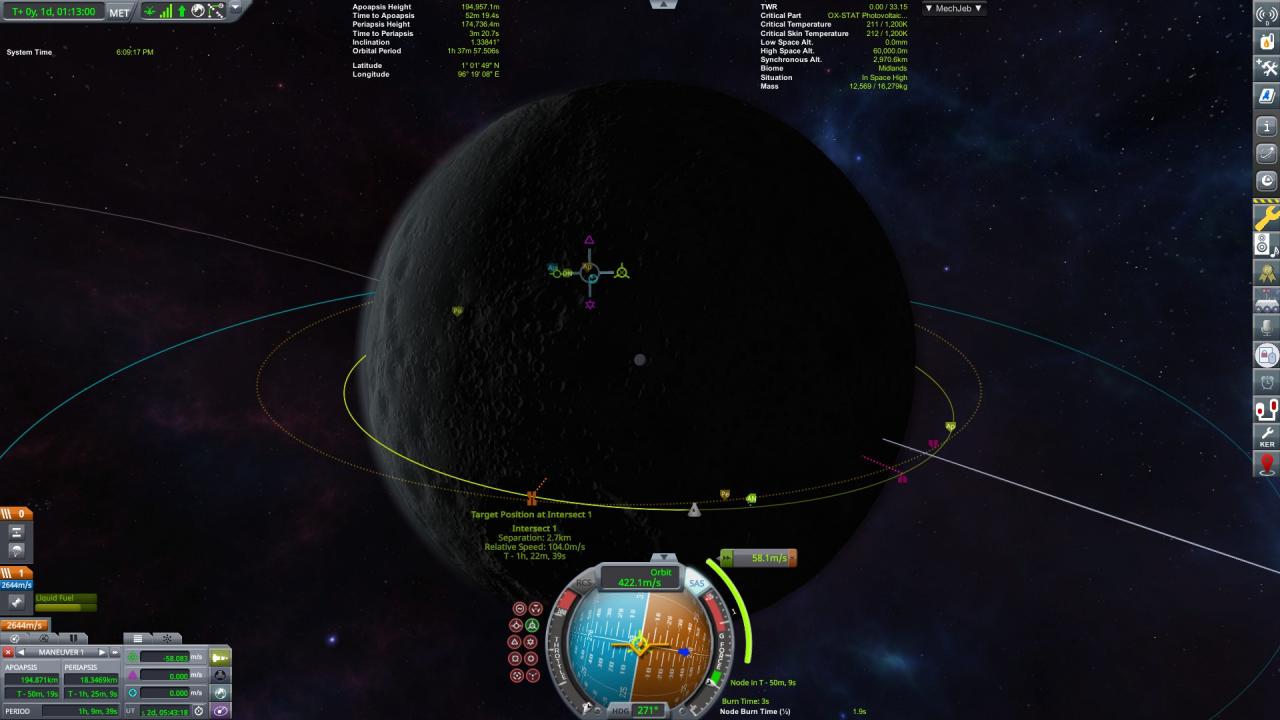 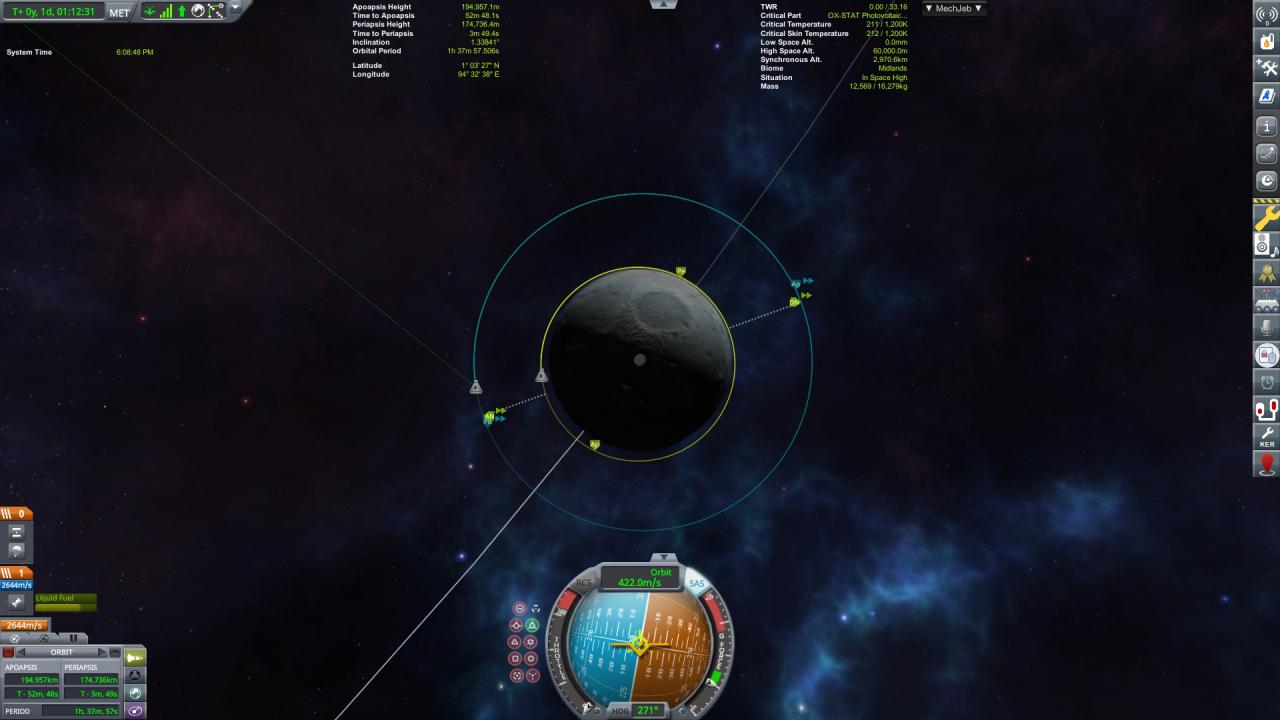 Right click the arrows to show the intersect distance, and drag normal/antinormal until the distance is within 2km. Execute the maneuver and quicksave, then timewarp until shortly before the intercept. Once you reach the closest approach arrow and you can see your craft in the flight view, point retrograde and fire the engines until the speed on the navball is close to 0m/s.
Now, switch to the other vessel and EVA the first kerbal. Use the jetpack to slowly fly over to the rescue spacecraft, and board. W, A, S, and D move horizontally, Shift moves up, and Ctrl moves down with the EVA jetpack. Repeat for the other two kerbals. Your kerbals are now on a vessel that has more fuel, and therefore saved.

Thanks to shulk for his great guide, all credit to his effort. you can also read the original guide from Steam Community. enjoy the game.

Pizza Tower: How to Enable the Hidden Hardmode

Is the Pizza Tower not hot enough for you? Want to turn up the heat? Here's a simple guide on how to enable the unused...

Bloody Hell: How to Get All Achievements

Explained all achievements, and how to get them!   Achievements Hello there. From hell, jump into...

Here is a full list of all Artificing Recipes in SpellForce: Conquest of Eo. the list is originally created by r3d.hammer and is still a...

A guide to running through the entire Abdullah story as fast as possible.   Preface This guide was made as a thought exercise...