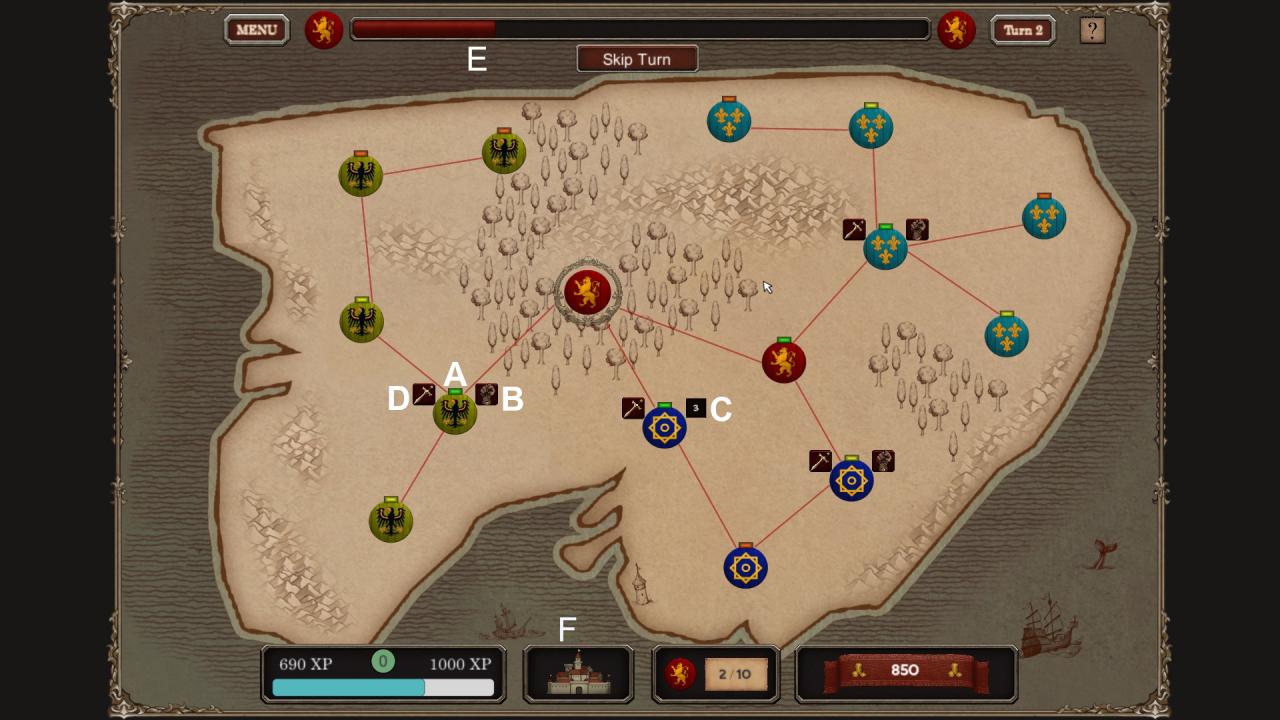 This is Vodria. Your surrounded by enemies, but dont worry, your the attacker. Your goal is to conquer enough regions to lure out the enemy main army. Then make the “bossfight” and be the new king or queen

Every region has a color that show the average strength of army you have to fight: (A)

The enemy units strength has still a random factor. Dont worry, if you lose a battle, just get back on your feet and continue the fight

We have 2 options on a region:

(E) Your enemies are weak, but unite and attack after some rounds. Then every lord conquer back one of his lost regions. To stop this, defeat a lord by capturing all his regions.
* there will be no battle, you lose the regions. Maybe i will make this event more interesting in the future.

Regions with higher difficult levels give more money. That counts for raid and conquer.

Before we rush into the first battle, take a quick look at our army (F) 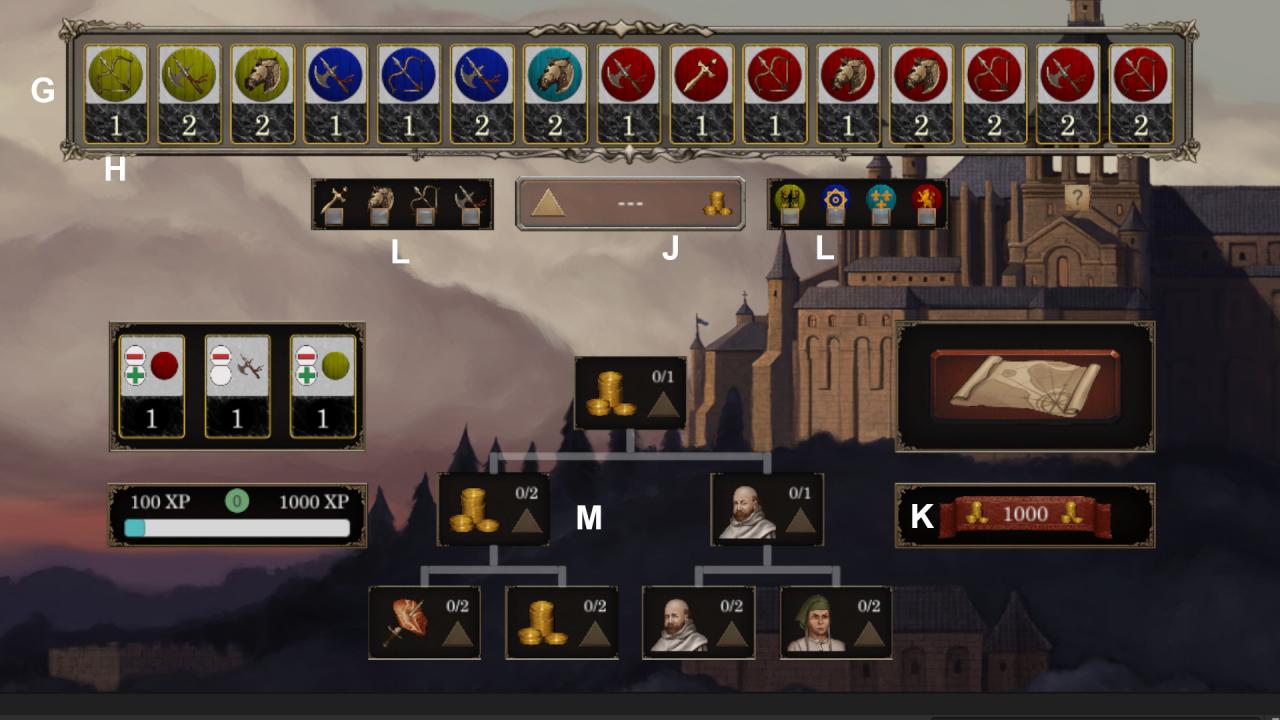 You have always the same amount of troops in your army. (G)
Dead troops will be replaced by fresh recruits (strength 1) with random type and color. (H)

It is also possible to change type and color (L) with an strength upgrade. But the price will be higher than usual.

With every battle you get some experience as commander. With a “level up”, you can spend a skillpoint (M).

Some skills show you a few cards of your opponent. Others lower the the price for strength upgrade.

For the first time, i recommend to level some of the 1 units to 2. No need to save money now.

Back to map and lets attack a region

Heart of the game 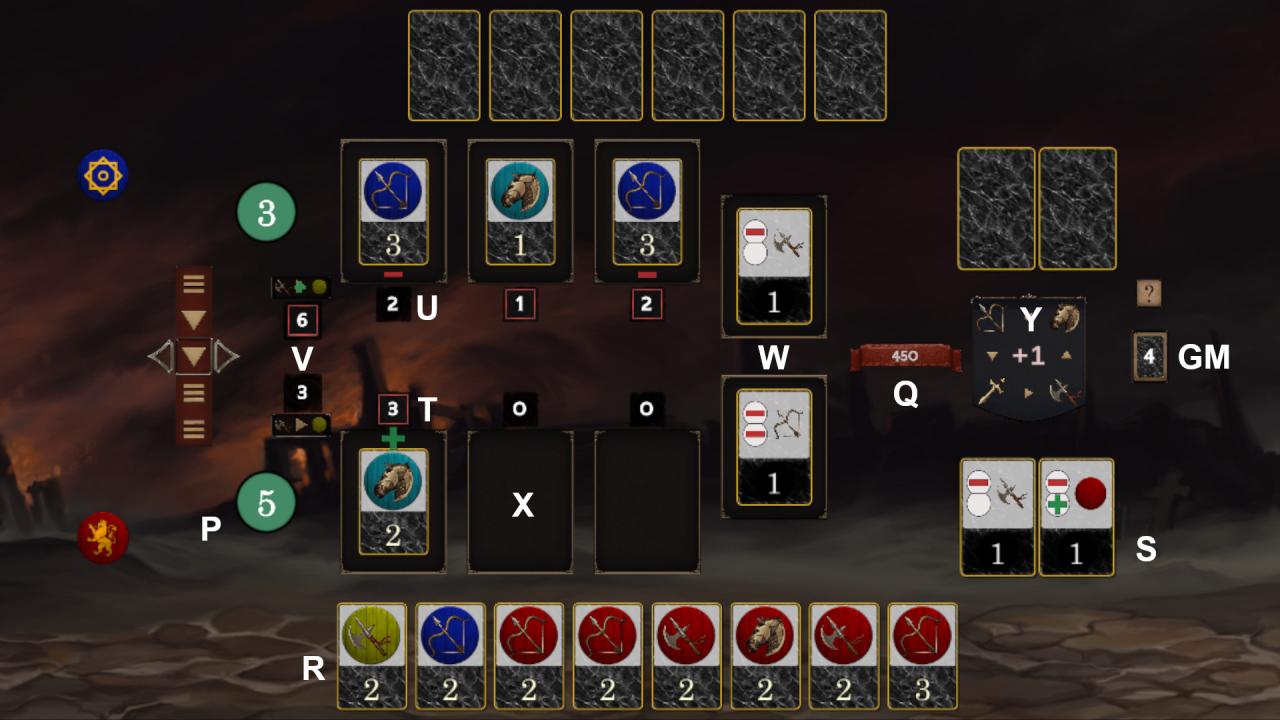 To win the battle, we need to score more points(P) than the opponent. Even if we cant win, its good to score as much as possible, because we get money(Q) for it.

Every troop card has an direct opponent and after each side have 4 cards, strength is compared.
If we have more strength(T), than the enemy(U) in a “duell”, we score 1 point.(P)

Bonuscards(W) affect the troop cards on the battlefield(X)
Some positiv (strength +1), some negativ (strength -1).
In this example only our pikemen get -1 and all archers -1

Rock Scissors Paper
Every unit type has a counter(Y). Cavalry get +1 strength against archers

card set: If the 3 troop cards on the board have the same color or type you get +1 on sum

terrain: if arrow shows up, you get +1 on sum, down -1
The side who win the clash of 4 cards push the enemy back

while you always put 4 cards down before the calculation, your turn can be different from battle to battle.
Sometimes you have to put one card … then the opponent … you again.
In this example you put down 4 cards at once.
There are 3 modes, 1, 2 and 4. It is random and counts for the whole battle. Adapt your strategie 😉

Thanks to Aksei for his great guide, all credit to his effort. you can also read the original guide from Steam Community. enjoy the game.