Lost Nova: Achievements Guide (How to Get)

In this guide, I’ll explain to you how to get the achievements.

None of the achievements are missable and there are no hardcore achievements. A lot of them you’ll easily just unlock by playing through the game without looking them up beforehand.

Here is a very simplistic map of the game I made to hopefully help you out with where to go for the achievements. The shortcut goes from Painted Desert to Coral Ocean. 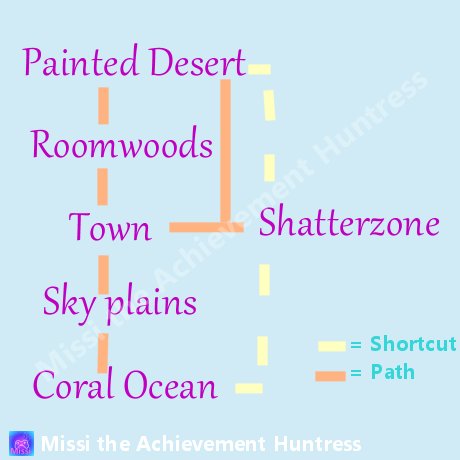 No Rush
The theme of the game.
This achievement you’ll get for talking with the villager with the apple stand in front of her house.

Puzzle Master
Pushed a block where it needed to be.
All over the world, you’ll find small puzzles where you have to push a block with your laser to the right spot. The first time you do that you’ll unlock this achievement.

Gone Fishing
He pinch.
In the store in the town, right of the town center, you’ll find a fishing rod. This might be only available after you pick up your free Glem Converter. The fishing rod costs 50 cores. After you bought it you’ll sometimes see a star in the water, go there to start fishing.

Rose Garden
Picked roses for the princess.
Around the town center, there is a chance to encounter a princess. I’m not sure what triggers it, but after you have talked with her, bring some flowers to her castle that is located in the painting area, southwest side of the map. This achievement pops after bringing a few flowers to her, I think it is around 8. You’ll find the roses all over the map, even before you have talked with the princess.

Delivery Service
Shipping and handling not included.
At one point in the story, around the town center, there will pop up a post office on the right. Talk to the guy to start with delivering packages. I believe this one pops when you go talk to him after you have delivered 5 packages.

Brian’s Blaster
“Come on down Brian’s Blasters: You’ll love the way you blast.”
I’m not sure what triggers it, but at one point when you’re in the store Brian will tell you that the prices in the store are too high and that if he owns the store everything will be better. A little later on you’ll see that Brian takes over the store, after that this achievement pops.

Pumpkin?
Pumpkinl
Destroy this mushroom that is just south of the town center, walking into the Sky Plains area. 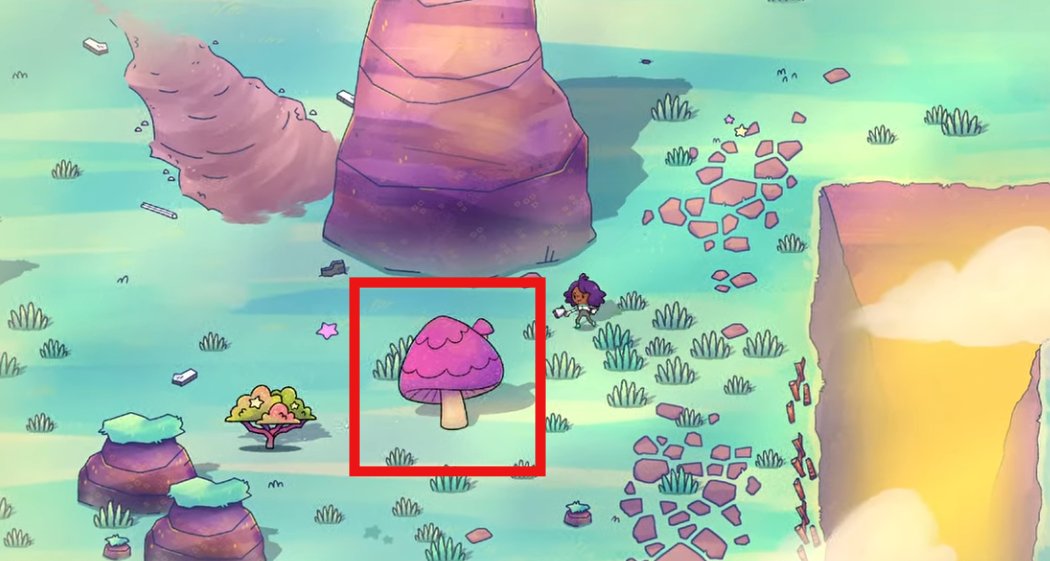 For Science
Quadrupled the opportunity for science.
You have to get all 4 thingies to plant seeds for this achievement. The cost 100 diamonds each. They are next to your space ship soon after the ship being towed to the town center.

Center of Town
Planted Flowers.
At one point the princess will be next to the Bridge Building Boss just south of your base. Talk with them and you can at flowers to your town center for 500 diamonds.

Silkgem Depths
Reached the lowest level of the Silkgem Mines.
You can find the mine in the fashion store. (After let the turnip has moved, to the south). If you reach level 10 within the time limit you’ll unlock this achievement.

Archeologist
Filled the museum with priceless artifacts.
At one point you’ll find this mysterious guy in the town center, next to your base. He will tell you to follow him to the east side of the town center, past the store. After that, he asks you to come back later. When you visit him later he will explain that around landmarks in each region you’ll find those cubes and if you let 2 of them touch each other they change into artifact pieces. To unlock all the items in the museum you have to pay the following amount, increasing in how much for each step: 10 – 25- 50-75-100
Don’t stop collecting those pieces when you have enough, as you can turn them into cores and you’ll need a lot of those for another achievement.

Bunny Enthusiast
Pet Every bunny in every town.
This achievement explains itself very well, just every time you see the guy with the bunny, pet the bunny. You’ll see a picture of you petting the bunny.

Just the Beginning
You fixed your ship, saved the world, and helped out a giant worm. what’s next?
You’ll get this achievement for finishing the story, after getting all your ship parts.

Live Music
Attended a concert of three best friends.
This “quest line” starts in the first village when someone asks you to deliver the apples to the person at the light house. after this, you’ll meet them in different areas, mostly the order where you also will have to go for your ship repairs. At the end they will be performing a live show south of the town center.

Vengeance
Witnessed the righteous fury of sir Corv.
There is this knight at the town center who talks about revenge. You can talk with him almost every time you visit the town center, and he has a lot to tell you, believe me! At one point he will finally go on his quest for revenge. The next time you see him at the town center he will have settled his vengeance and you’ll unlock this achievement.

Pet Ownership
Made a small friend.
After finishing the main story and buying all the items in the store, the store owner will sell pet accessories and treats. I think you only need one appropriate item for a pet, treats, and maybe a feeding bowl. There are 4 different pets in the game. The easiest one to find is the dog close to the guy who wants fishes.

Golden Hat
Expensive headwear.
After you beat the story you can buy a crown at a new store that popped up in the town center for 10k core. To make this easier during your playthrough, try to have use all plant thingies around your base to produce the goods for the highest Glem converter.

Hint 1: It’s an NPC with a low chance of spawning in a certain area. Can’t miss em. I think it’s less than a 1% chance. I don’t want everyone to see it, but if you know where it is it’s easy to force
Hint 2: They big, small-ish area
If you have found Them, please let me know!

Thanks to missiloon for his great guide, all credit to his effort. you can also read the original guide from Steam Community. enjoy the game.