A list of tips & tricks with accompanying pictures to help players win the race on harder difficulties, mainly Simulation mode.

Like many others, this was my first time playing through Mafia’s Racing level; either in the Definitive Edition or the Mafia (2002). As a result, I was not used to the ball-breaking difficulty of this single level, in comparison to everything else in the Mafia series. Call it moaning or otherwise, say ‘git gud’ if you want, but in reality, games nowadays are just easier – dumb-down schlock. Souls-likes being the exception.

After looking through discussions to find some advice myself in regards to this level, I found nothing aside from the usual “Turn down the difficulty”, which is a stupid thing to tell someone who regularly plays games on Hard, because they think Normal is too easy. So they’re closed off from achievements because of a single racing level. It’s quite infuriating, and can be compared to some of the COD games’ difficulty spikes, where a single mistake can mess up your run.

Anyway, I digress, having spent an hour or two, today, on the level, I think I can provide some semblance of advice and without further ado…

At the beginning of the race, you can fill up your gas gauge, located at the bottom right of the screen, next to your mini-map. 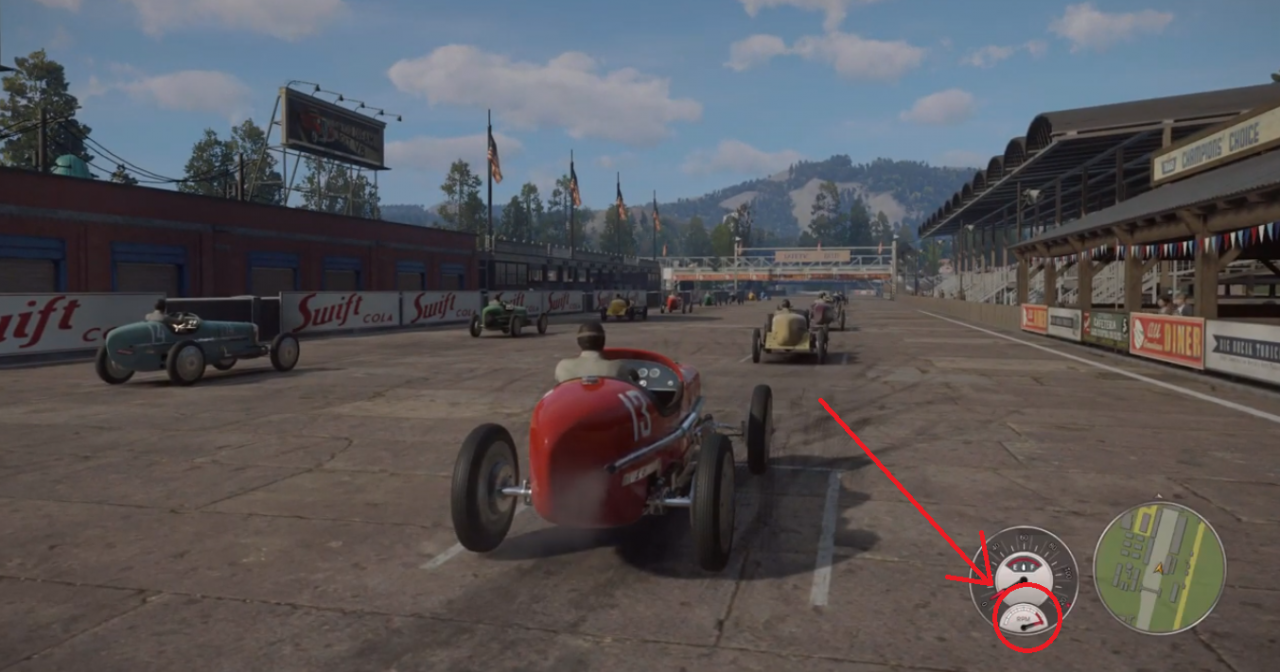 This is, somewhat, of a red-herring. It implies that you can ‘blow-out’ by revving your engine to the max, similarly to the beginning of a Mario-Kart race, this is indicated by the red bar at the end of the gauge. And although you begin the race with the drivers ahead further, or closer to you sometimes, I believe this is entirely Random and can be ignored. In other words, Pedal to the metal!.Veer to the left, immediately after passing the European Racer who’s racecar you fixed, staying close to the side. And slow down as you approach the first left turn. 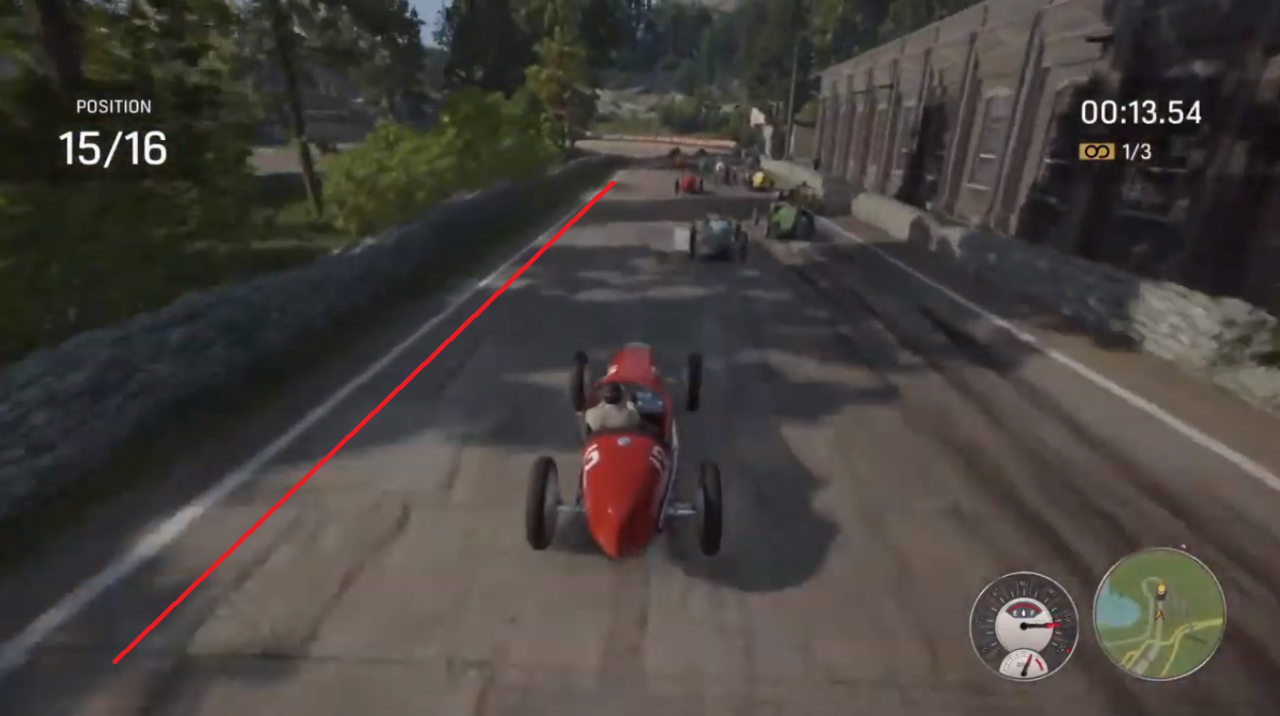 Hopefully, enough cars are in front of you to break your speed (you’re essentially going to slam into them, making sure you’re slow enough to not spin out).

Next up is a series of grass patches, three to be exact. They’re almost certainly to be used in gaining on the competition. The first is located immediately after the first left turn, here: 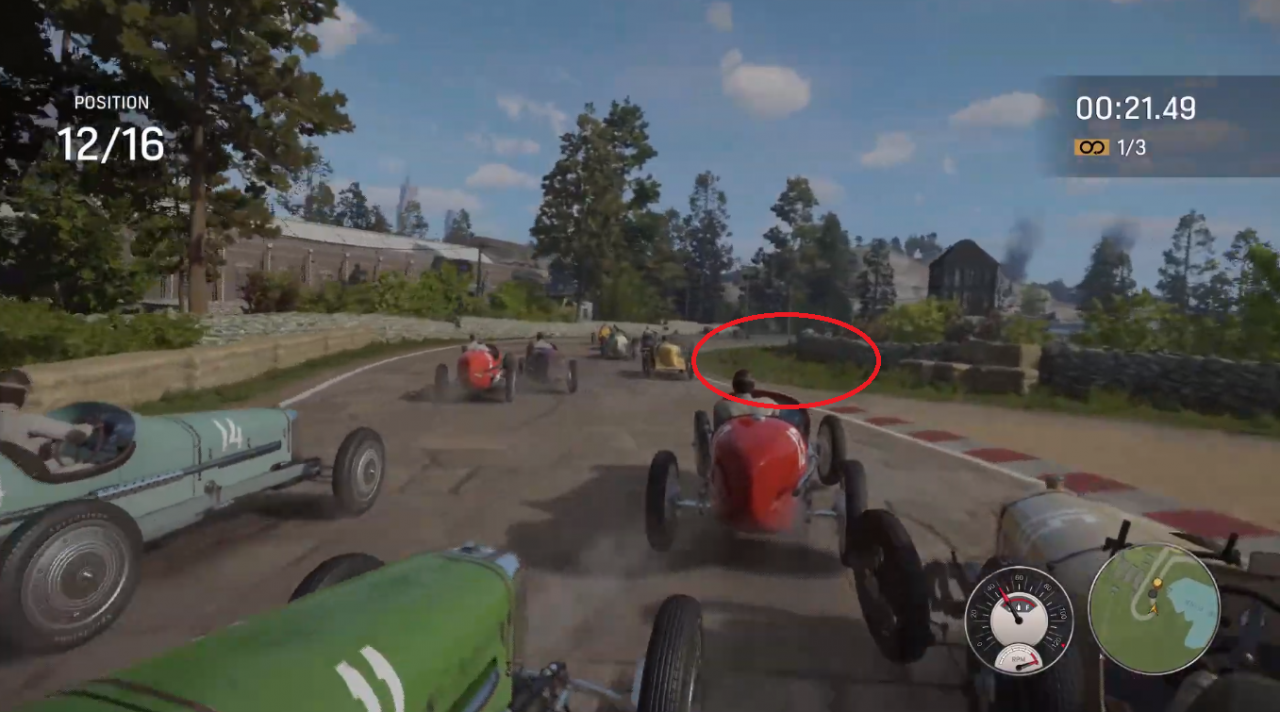 The second is immediately after the first, here: 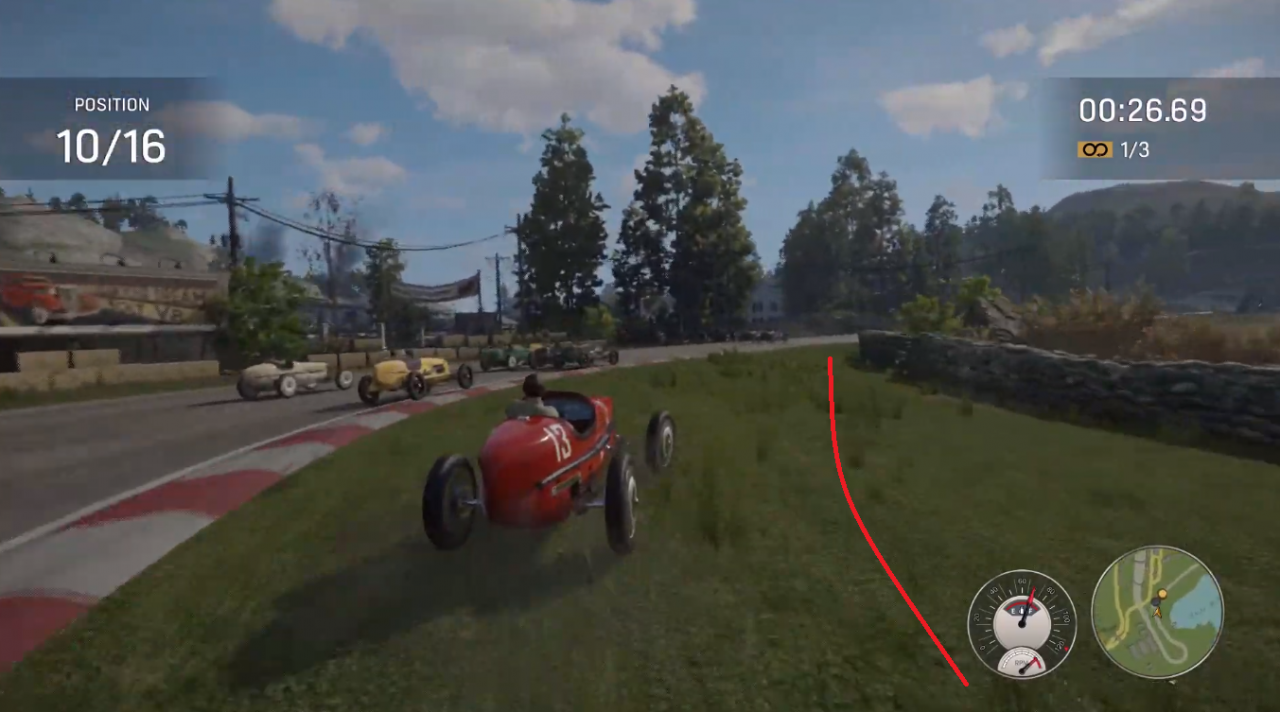 And the final patch of grass is a few quick seconds after the second, just under a bridge, here: 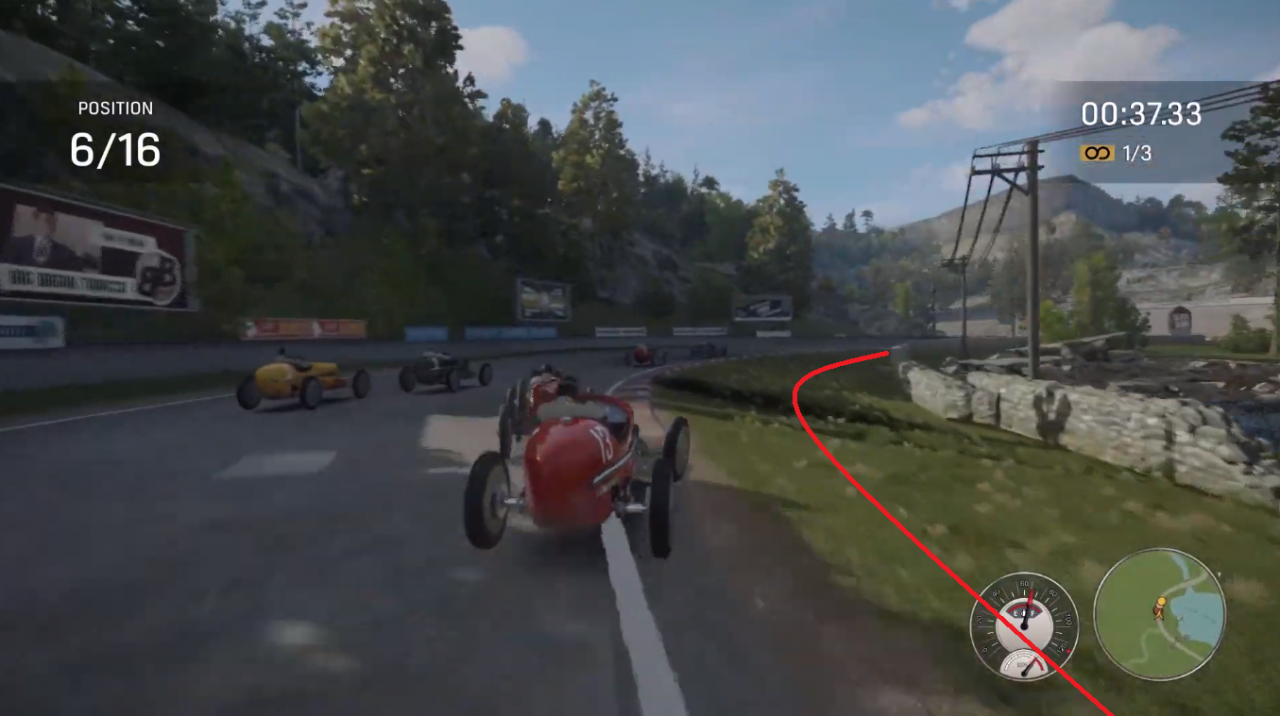 Getting a feel, yourself, for how close you should be to the sides/other cars is up to you, whether you’re playing on Automatic or Simulated mode, as well as the controls themselves, but generally try not to spin out.

Next up is the second left turn & the first NPC scripted blow-out (excluding the European Racer). 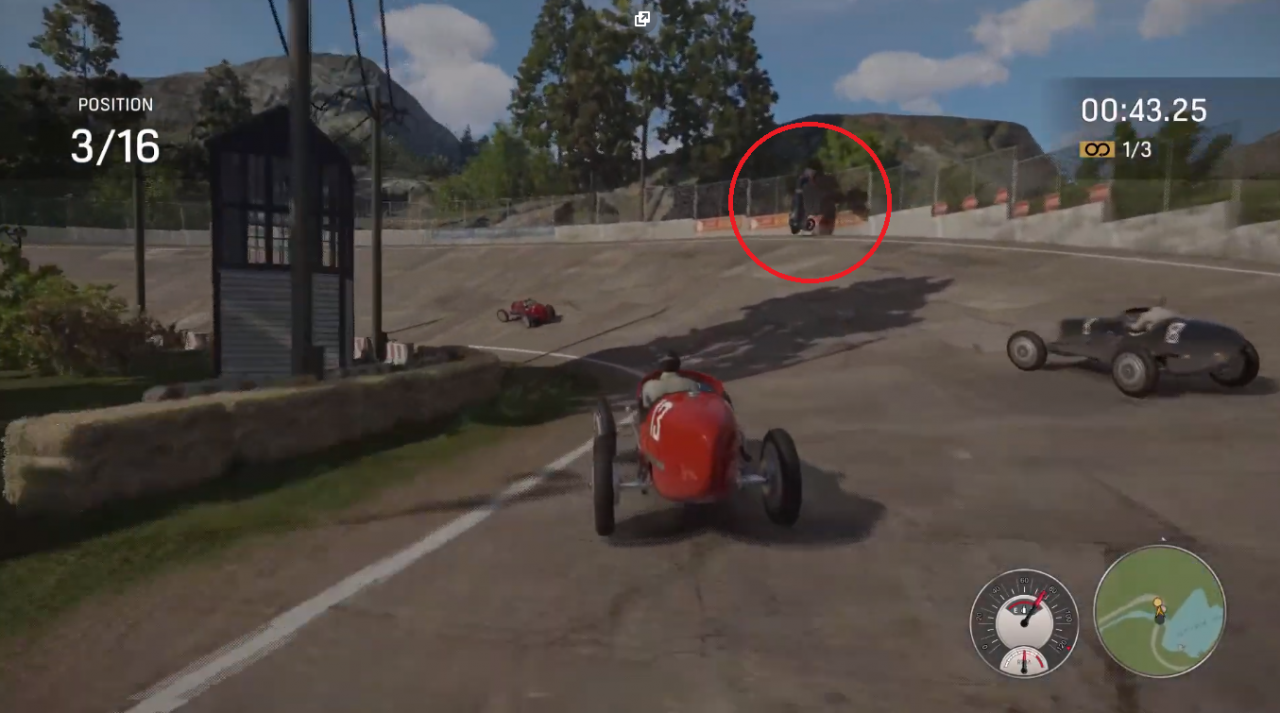 It is generally quite easy to avoid, but too much speed or being in the wrong position, may force a collision.

The next declining left turn is quite easy to pass, simply slow down as you approach & turn. But down the hill is a different story.

To get ahead, riding over the small hill at the bottom of the decline is essential, but the correct point at which to traverse the small hill is important. 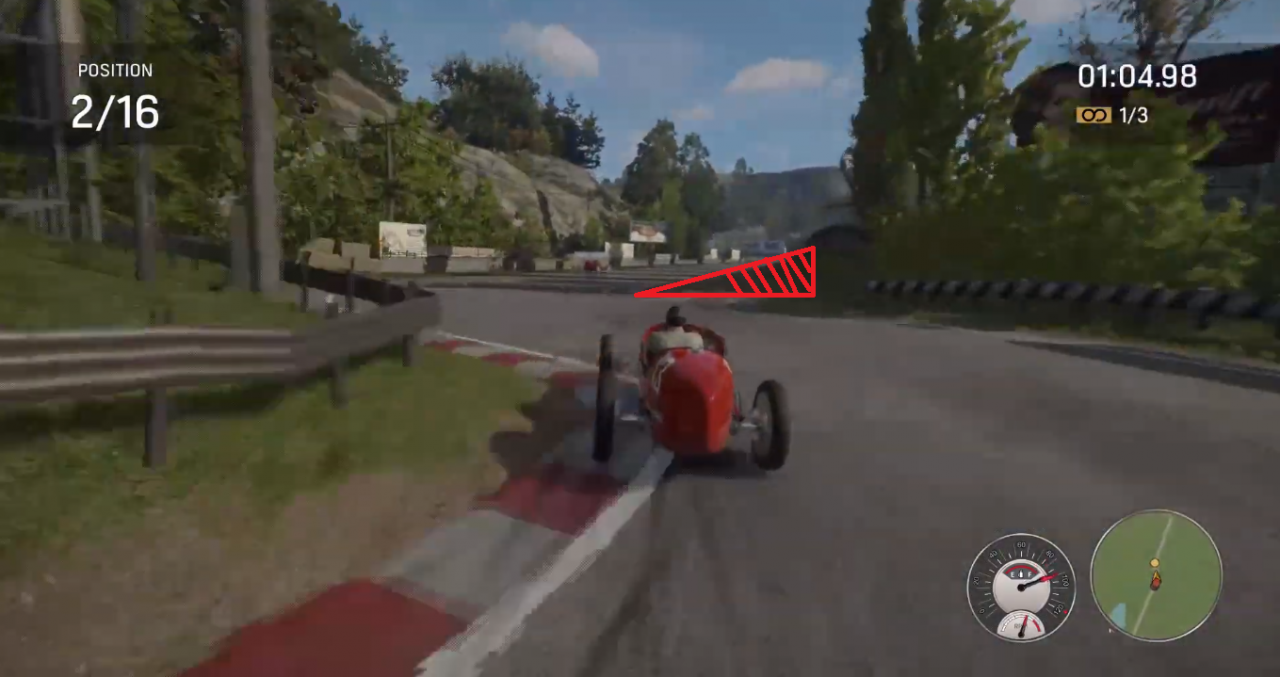 The wrong trajectory could catapult you into the air, almost certainly making you fail, even if you recover. But a small enough launch, could gain you some ground.

Next, is a sharp left, followed by a sharp right turn; each littered with numerous obstacles, such as a (in my experience) useless grass patch to the left (I’ve marked with an X), hay-bales and tyre-stacks. 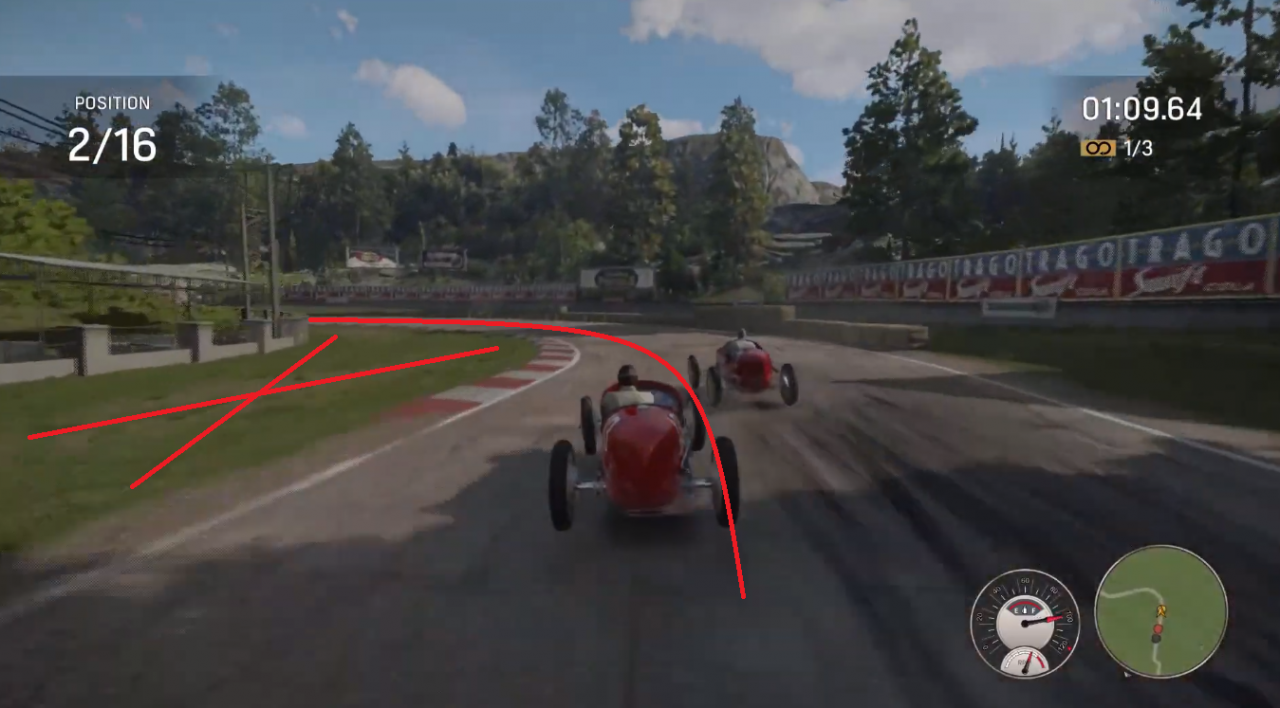 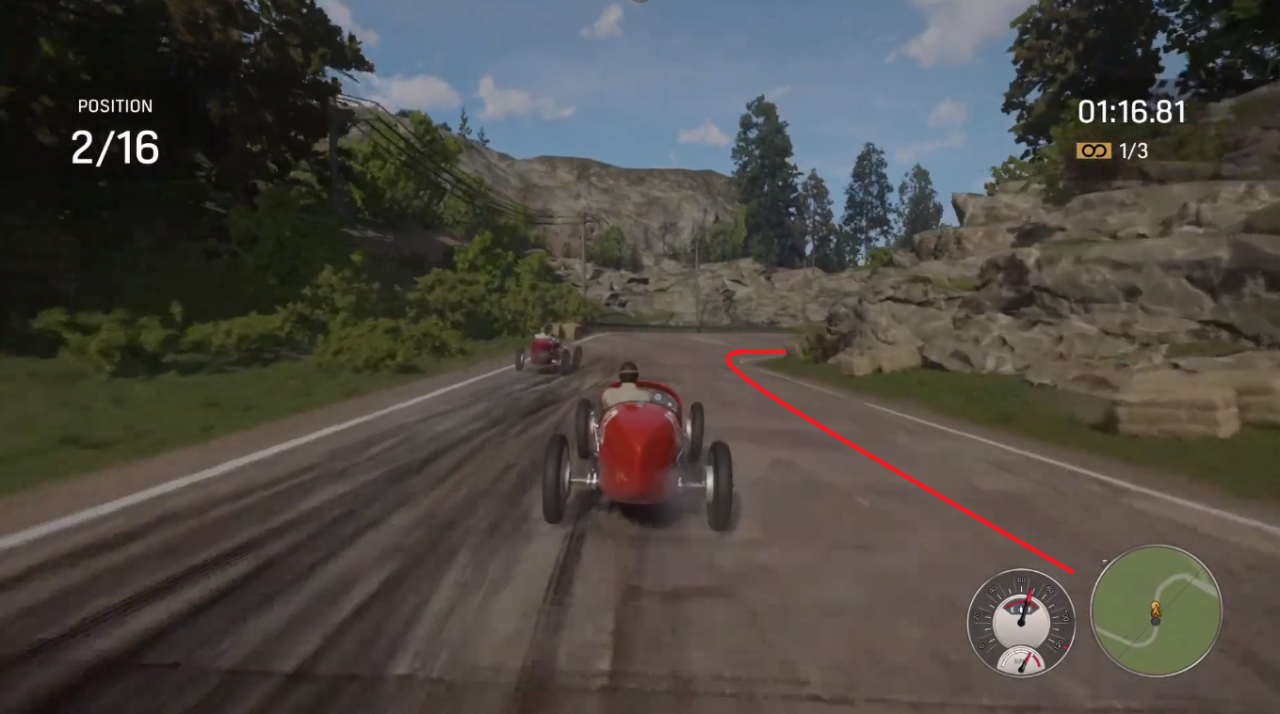 But slowing down before the sharp left, and sticking close to the right wall on the sharp right, should warrant no mistakes.

All that’s left is to drive dead on towards the final left turn, and I encourage use of the natural road-elevation to your advantage. 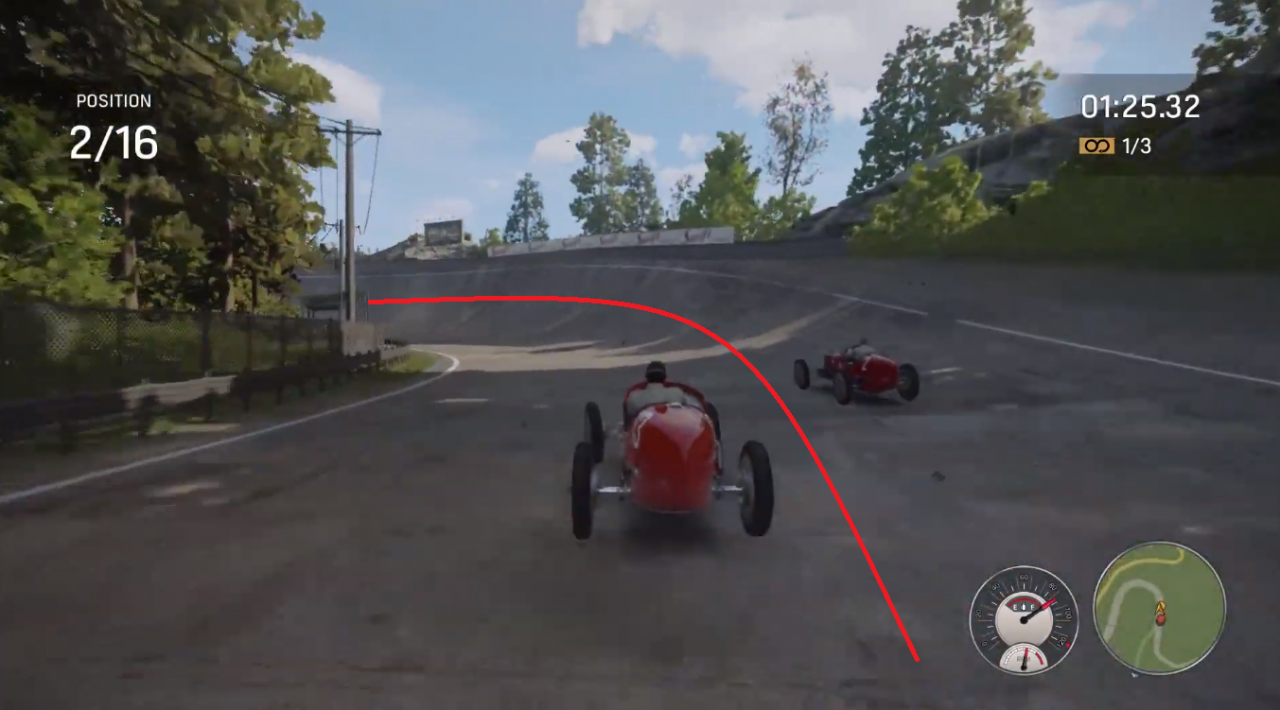 Rather than just braking left; you can go faster and, since all NPCs use it, you stand to lose no ground in the race.

In the second lap you can play the race much safer, assuming you’re ahead; there’s no chaotic jumble of racecars at the turns, but do follow the strategy you used for the first lap verbatim. There is however another NPC blowout here: 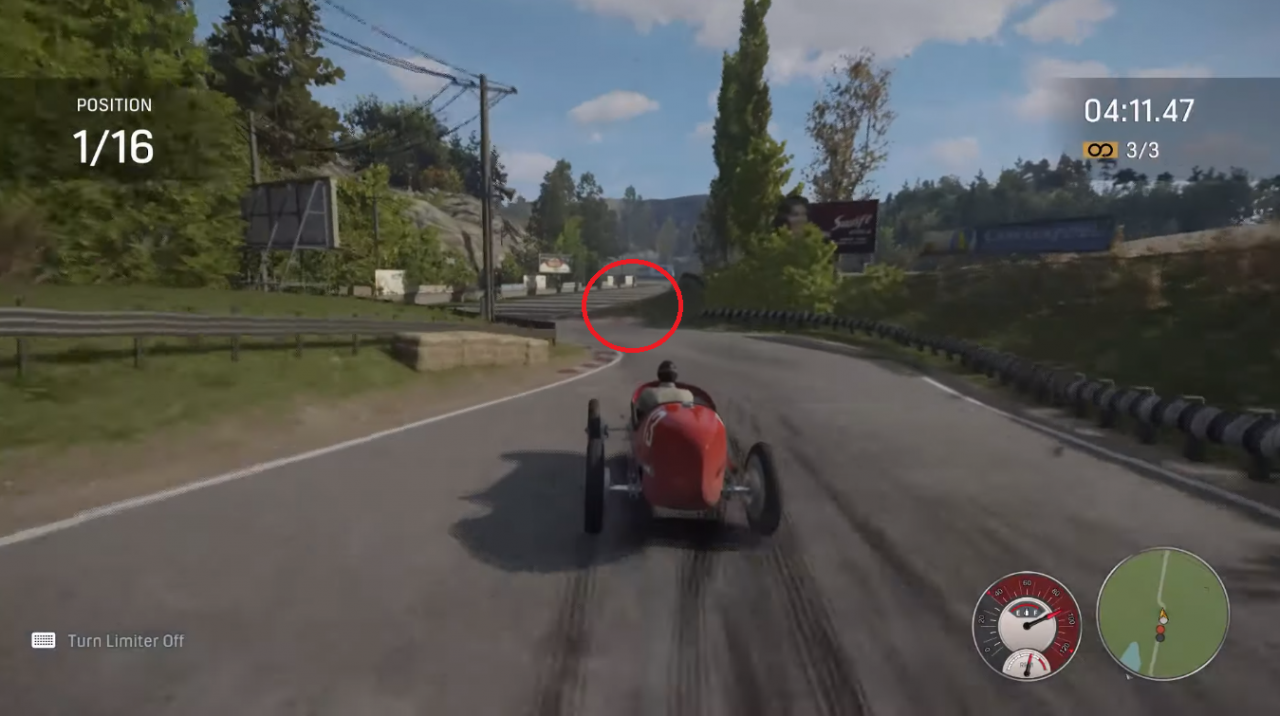 And in the third round, another, here: 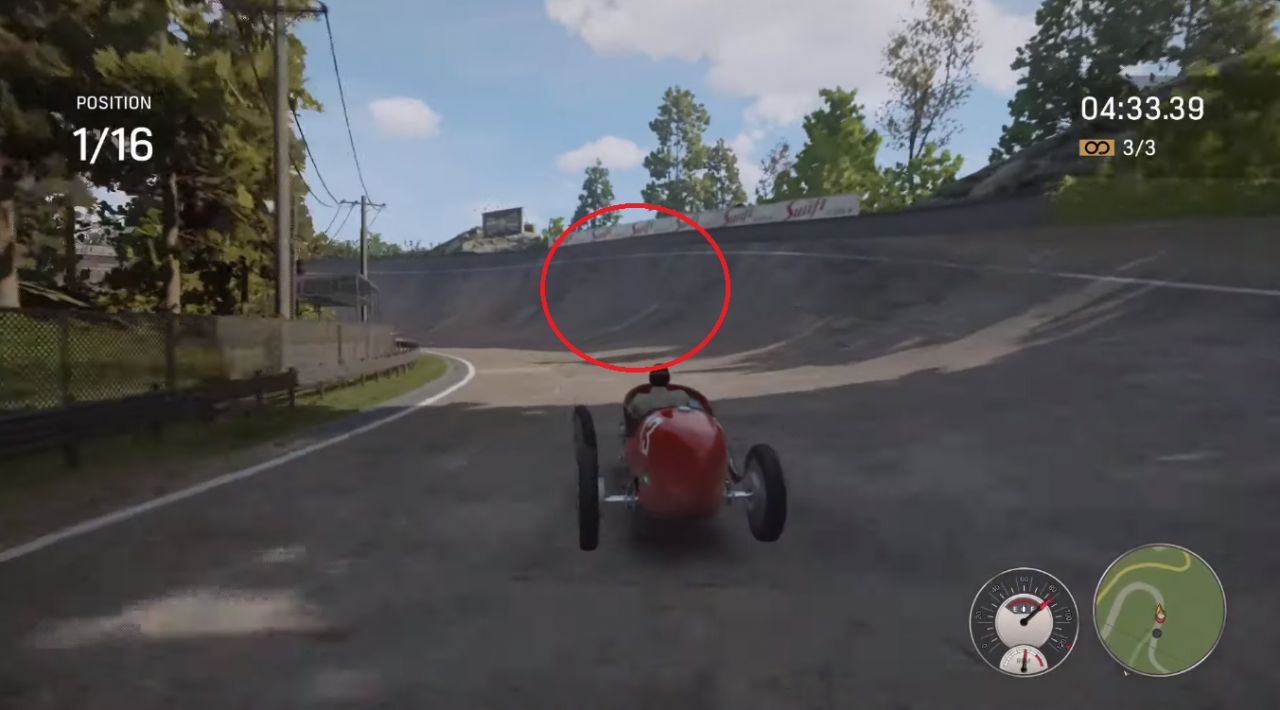 Do be prepared for those.

In Summary
– Don’t use ever use ‘spacebar’ to brake, as that’s a guaranteed spin-out
– Slow down as you approach sharp turns
– Use grass patches where possible, except the fourth one.
– Know where each NPC blow-out occurs, and plan accordingly
– If you make, even just once mistake, I recommend restarting, as recovery is near impossible.
– And be patient with the NPCs random placements.Soon enough you’ll be swinging that trophy & then promptly searching for a drunk compradre, with a smile of satisfaction on your face, goodluck!

Screenshots taken from AC OMEGA’s walk-through on YouTube (without permission), although we have different strategies.
His video can be located here:

Please watch his video for a fluent walk-through/breakdown
Thanks AC Omega for the handy footage!

P.S. because AC Omega was already in 1st place, no screenshots of the 2nd & 3rd NPC blow-outs was caught ‘on camera’, but I have screenshotted the area where they do blow-out. If you’re in 1st place, NPCs don’t blow-out.