This guide introduces some subtle game mechanics to help bolster the ability of Hulk to apply status and battery effects, primarily for tank builds.

This is a guide for subtle optimisation of Hulk for stun/status effects, and in particular battery effects. While it can be used in any build it is primarily of use for tank builds.

A Hulk tank build, while almost impossible to kill due to high defense and life regen, the downside is a lack of damage as it is not uncommon for full tank builds to have 750-1000 might/valor.

But even with a tank build, Hulk is a strong AoE character so this guide covers ways to help improve Hulk’s damage, through consistent battery effects, but to also bolster Hulk’s tanking role, e.g., crowd control, while spreading stun & status effects in an AoE with some subtle use of particular game mechanics. Specifically using dodge to maintain small debris attacks throughout attack chains and using small debris attacks simultaneously with attacking while holding a mob(s) as a bludgeon.

Primary: These are the types effective for CC.

Secondary: These are more damage oriented. The cosmic healing is not needed by Hulk due to rage healing, and with Boneshaker with taunt specced Stranglehold and Thunderclap the mobs should be focusing on Hulk anyway. However the sonic status will help keep Hulk enraged, and lessen the cool down of his heroics.

Note[/b]: Hulk will apply gamma damage when overcharged.
Tertiary: Hulk cannot access these effects through gear, but can apply them via using a specific mob as a bludgeon.

Using status damage for CC and battery effects is essential for a tank build Hulk.

Dodge -> L debris attack. A Dodging light attack to begin an attack chain causes held small debris to not break upon striking a mob for the entire duration of the combo.

By holding the debris for the duration of the attack chain, the status of both hand equipment (L finisher perks) and range equipment (small debris melee attack perk) will give two status effect damages, leading to a battery effect if the status types are opposite polarity, as both status damages are applied.

Standard dodge-> strike or a sprint+L attack deal more damage than the standard stationary strike. It has the same damage as the 2nd hit in the scaling L,L,L,L combo, e.g., L1,L2,L3,L4 becomes L2,L2,L3,L4 damage wise.

The following attacks do not break small debris on impact with a mob.

Note: The dodge debris strike and chains do not benefit from Hand Canon perk.

Note: These strikes do benefit from the Hand Canon perk.

Using a Mob as a Bludgeon

Note: Combatant Shield is an odd ability. It does not absorb red attack damage, only white or yellow. Once the timing for a parry is learned this ability is essentially useless. 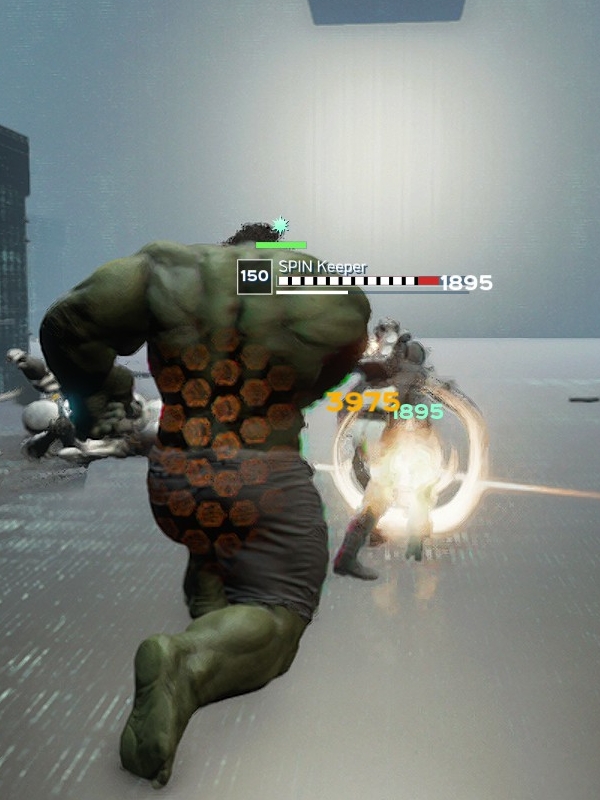 Hulk can grapple one or two mobs and attack with them as bludgeons while simultaneously holding small debris throughout the entire bludgeon combo.

Note: This only works with the light bludgeon combo.

Grappling normally breaks the debris but if Hulk attacks, immediately and continuously, the debris is kept. An enemy does not need to be struck to keep the debris. Thus the debris can be kept by empty attacks if Hulk needs to maneuver slightly to reach enemies. If the bludgeon dies, Hulk keeps the debris allowing Hulk to continue to use dodge debris strikes.

Note: This makes the Anomalous Platelet Graft ranged item, which is generally considered to be somewhat useless, to be quite useful if it has two small debris attack perks. The lack of stats make it less so on some endgame areas, but until that point it is a very effective gear piece to help create battery effects. 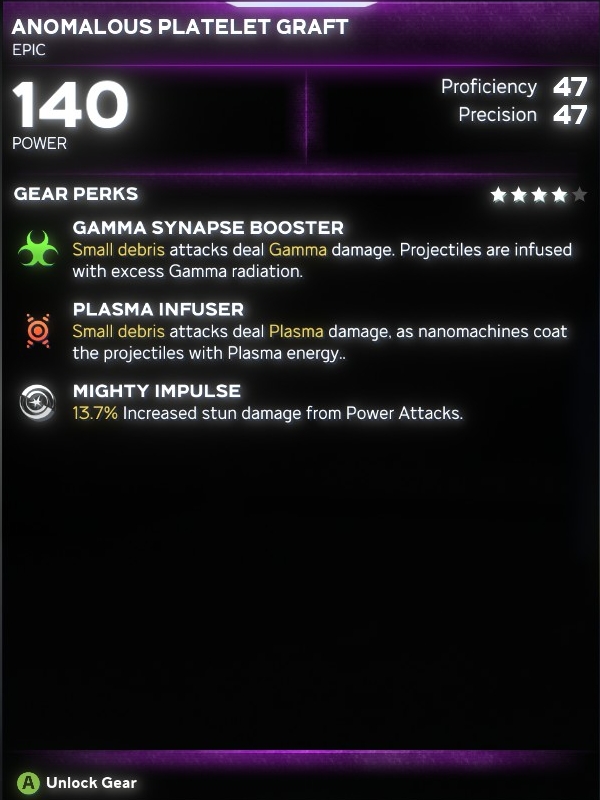 To grapple a mob while holding debris:

Hulk holding a bludgeon and small debris. The first bludgeon will always be in the same hand as the debris. 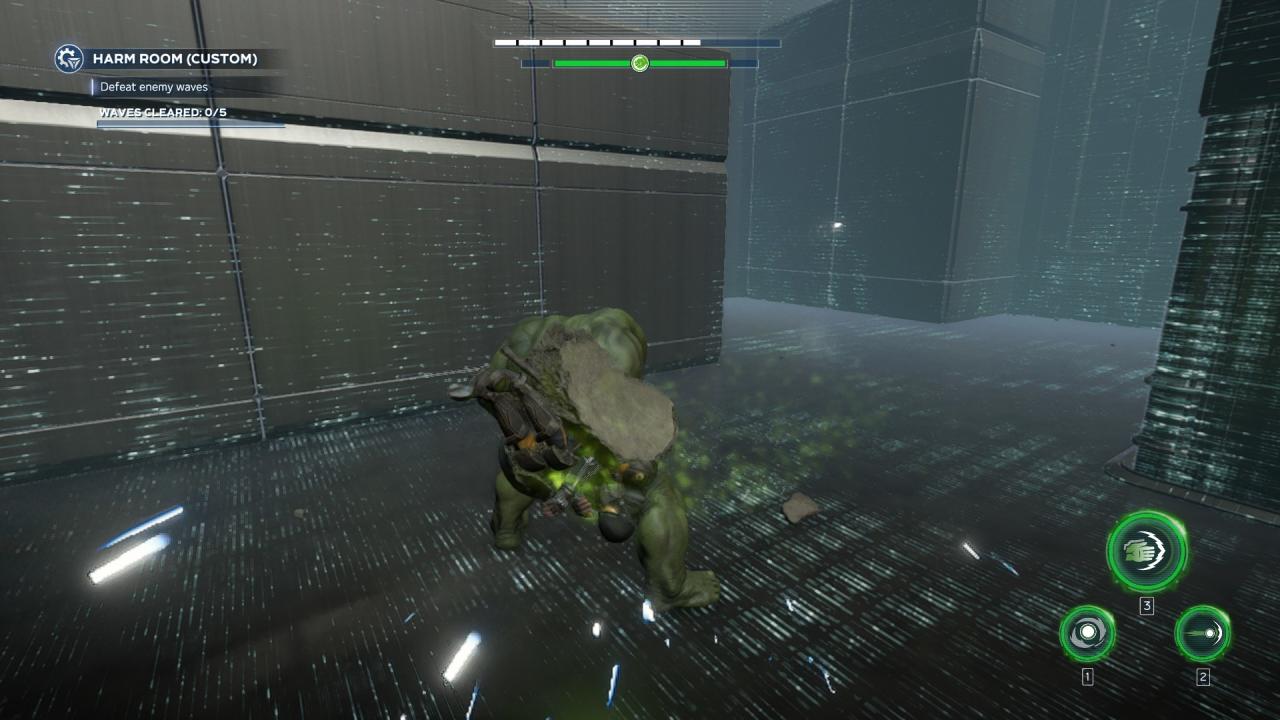 To grapple a 2nd mob while holding a bludgeon and debris:

Hulk holding two bludgeons and a small debris. The second bludgeon has three status effects: cryo, plasma, and gamma. The cryo is from the first bludgeon, plasma from the hand equipment perk, and gamma from the range equipment perk. These were applied in the process of grappling the second mob. 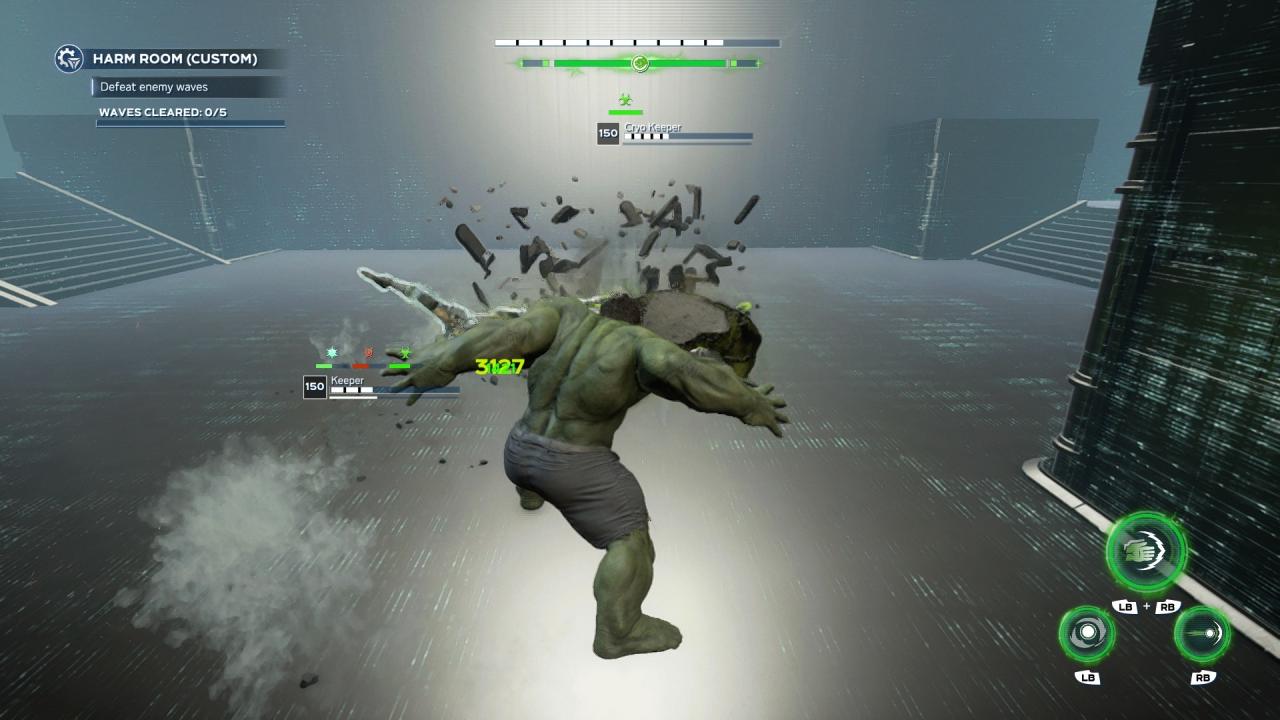 Standing grapple will rarely work after a certain mob level, e.g., only by surprise similar to surprise takedowns, and some mobs are resistant or evasive to grapples. There are times where a grapple is essentially guaranteed.

Stun State
Stunning a mob, i.e., able to perform a takedown, is the easiest opportunity to perform a grapple.

Note: The grab attempt can be made on any of the strikes. The finisher or parry however may throw mobs out of range.

Note: A mob affected by Cryo status falls more slowly as well, giving a chance to grapple.
Note: Some float hits will stagger larger enemies, but the grapple set-up still can apply.

Some mobs are resistant to grapples, some are partially immune, and some are completely immune.

Melee With a Single Bludgeon

Fast 1x Bludgeon Chain
This can be used to attack mobs, but it is also a great way to deal damage to a CC’d bludgeon.

This deals damage faster than the standard H,H,H bludgeon chain as there is no pause after three hits. The animations can be cancelled as soon as Hulk touches the ground by performing another j+h attack, making the bludgeon slams come out very quickly.

2x Bludgeon Chains to Keep the Bludgeon
Heavy bludgeon chain finishers, while powerful, will cause the bludgeon to be dropped; the following allows one to keep the bludgeons. As with the fast 1x chain this is primarily used to damage the bludgeon while keeping them CC’d if there are no enemies to strike.

Thanks to Steve for his great guide, all credit to his effort. you can also read the original guide from Steam Community. enjoy the game.

Potion Craft: How to Raise the Dead

If you want to make a quick and easy 1k in the game Potion Craft - Alchemist Simulator, here's how.   Make sure you have rocks...