After reaching 200 in Infinity Arena on Steam (patch 1.0.1.19), I put together this writeup to outline the details of my team.

I have been tweaking this team for Infinity Arena by doing a run each day with it along with some small changes each time. The team has peaked at 200 in Infinity Arena but typically reaches level 180+.

The team works by quickly ramping up to 3 Poison stacks, a Burn stack, and usually some Chill stacks on each enemy. All of those statuses deal damage to the enemy based on the enemy’s stats, which are extremely high in Infinite Arena. While those monsters do get increased resistance to our debuffs, this still means our damage output scales with the enemies, which is important for this mode. Most of that damage gets converted to Bleed and sticks around for the remainder of the match, building to more and more damage each round.

Additionally, all that Bleed damage we deal keeps our monsters alive as we passively revive and protect each other, because a % of it is converted to healing and shielding for our entire team every turn. Because we’re dealing with crazy-high statlines, that usually results in a passive full heal and most of a full shield on our monsters against high level Arena enemies.

This is not a speedfarming team for reward boxes; it is an endurance team for stretching out your run to great lengths. If you have a lineup of 3 that you like to use for speedfarming, you may do so, then switch over to this team as your other 3 later in the run, seeing as Arena allows you to choose your monsters each match. 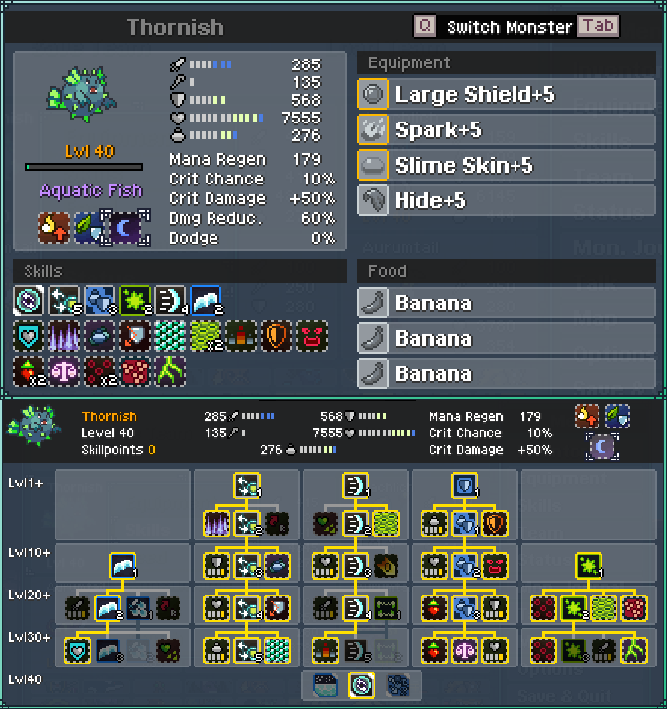 Overview
This puffer powerhouse is on the team to redirect hits (via Taunt and (Mega) Protect) and punish enemies with their own damage. Its Fishscales and Reflect skills allow it to reflect massive bleed stacks and direct damage to these very overpowered enemies we face at the higher levels of Arena.

Curse Chain helps spread all these statuses to stack them as quickly as possible. Poisoned Nerves helps boost our Congeal (and thus Bleed) damage from Arachlich.

Action Priority
Thornish typically spends its first round setting up Safecast for team-wide Barrier and Channel, then uses (Mega) Protect on subsequent turns.

If your allies are Protected, consider a Toxic Slam to apply an extra poison stack to any enemies not yet at max stacks. 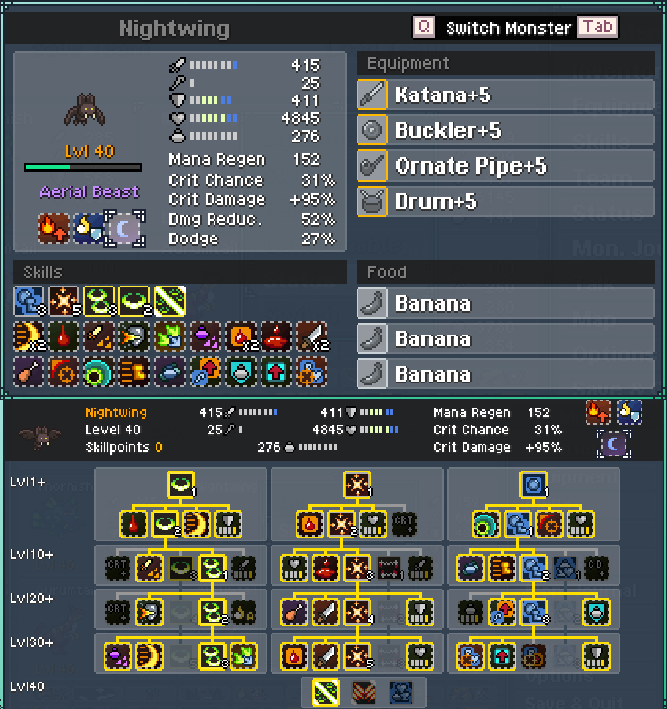 Overview
Nightwing serves a pseudo-DPS / pseudo-support role on this team. This overfed fat-bat has a ton of HP and Defense boosts, then stacks critical chance and dodge to make it capable of surviving lategame AoEs.

Its dark shift grants Bleed Out, allowing all the Bleeds we generate to stick around. Thornish has pseudo-reflect damage Bleeds from Fish Scales, and Arachlich pumps all the enemies full of bleed stacks thanks to its Blood Drive.

It also passively grants a HUGE amount of healing and shielding to the team through Feast and Healing Shield respectively. These heals get stronger as the match progresses, because the healing comes from the damage your team accumulates in the form of Bleed. Most of that damage is dealt via Debuff damage being converted to Bleed stacks from Arachlich’s Blood Drive. That means the damage you deal (and heal from) scales to the highly over-leveled enemies’ stats, thus always remaining relevant AND returning huge heals and shields relative to your own regular-level-40 stats.

Nightwing doesn’t typically do a ton of direct damage in this team but is used to apply bleed stacks and build combos. The stacks are especially important if the enemy has any bleed-stack removal, because it picks at random which stacks get removed – you’d much prefer to have a single hit of Nightwing’s Beating get removed than a juicy stack from Fish Scales or Blood Drive, so diluting the stack pool with these tiny bites is a fantastic way to ensure your damage keeps compounding on itself.

Action Priority
Round 1, Nightwing opens up with Shroud on the whole team. This grants a good bit of dodge to everyone which will help keep your deaths spread out so AoE attacks aren’t wiping your team at 150+.

Don’t worry about re-applying these buffs if your monsters go down and are revived unless you really think it will keep Thornish alive (it usually won’t). If both Nightwing and Arachlich are stripped of these buffs, it may be worth recasting, but be mindful that Nightwing can apply the buffs to itself by critting anyway, thanks to Critical Mass.

Beyond that, you’re just looking to stack up Bleeds for the team to get some early healing and shielding going while Arachlich’s Blood Drive builds itself up. Focus targets that you can hit the hardest, preferably using Beating for more Bleed stacks and higher combo and so that you get a higher return on the healing/shielding. Sometimes Cyclone can be worthwhile if you’re hitting multiple targets weak to Air and/or Physical, but it’ll typically generate less combo than Beating. If you are planning to Cyclone, have Arachlich move first in that round to generate combo for Nightwing instead.

You can try different ults on your Nightwing; I got to 200 with Mythic selected, but I would recommend Typhoon Cut. There are a few corner cases where having a single target Air skill that still builds high combo would be very helpful. Mythic is just nice for stomping the lower level teams a bit faster, but I found was not useful in keeping the team alive against higher level monsters. I didn’t much like Carnage, in my testing, but I did minimal testing with it. 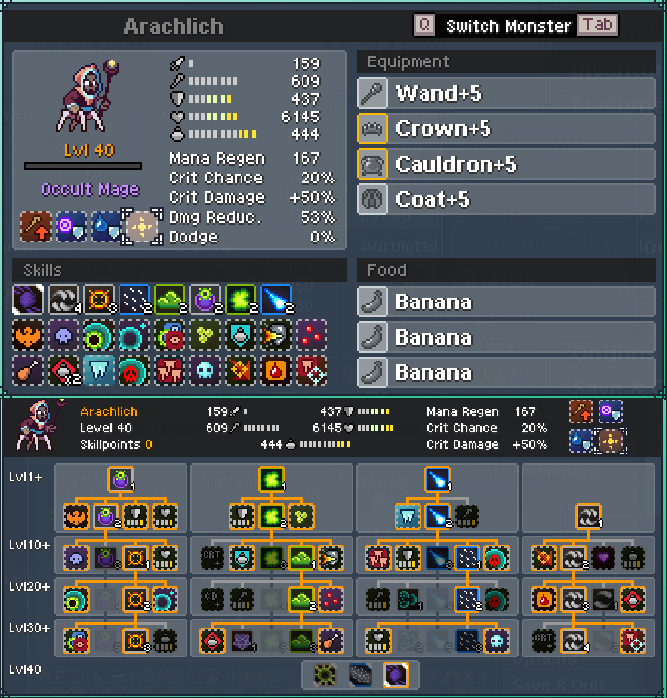 Overview
Arachlich initially existed on this team for Blood Drive and, to a lesser extent Congeal. It was a perfectly happy accident that Arachlich also happens to be decent at applying Blind to enemies, which I find to be necessary for surviving the later stages of Arena. It’s also capable of some pretty potent Revives, which we rely heavily upon in this composition.

In addition to that, Arachlich has the same passive healing combo as Nightwing, and these do stack. Specifically, Feast and Healing Shield. Lastly, whenever it attacks, it’s got a decent chance to crit on the first hit – if that happens, a Chill stack will be applied to one of the enemies, which will help you snowball your Congeal damage over the course of the match.

I have tried running Blizzard to spread Chill stacks more aggressively, but I find it is just necessary that this monster blinds enemies every round that it isn’t reviving an ally. Those blinds, I felt, added far more value than a couple of extra chill stacks.

The biggest challenge for this team to overcome in Arena is high level AoE attacks that wipe the entire team at once, and 3 Chill stacks + Poisoned Nerves was not enough mana reduction to prevent this from happening more frequently.

Action Priority
Arachlich wants to spend the first turn casting Dark Shroud, or possibly just Shadow Storm if there are multiple extremely concerning foes. The goal is to apply blind to anything threatening while you’re setting up all your defenses in the first round.

After that, Arachlich’s job is to keep the team alive while Nightwing and Thornish are stacking up the Debuffs/Bleed stacks to passively sustain incoming damage from the enemies. If anyone dies, Arachlich Revives them. Otherwise, Blind anything that may be a threat. Consider having Arachlich act before Nightwing to boost Nightwing’s damage, especially in the early stages of a fight when you need those big bleeds applied ASAP. When the game shifts to you outhealing the enemy damage, you can more aggressively combo-build with Nightwing and have Arachlich do a bit of damage with its blind skills.

Lastly, don’t use Revival to heal living allies; they’ll be healed plenty by Feasts, and even with full HP and shields, they’re likely to be oneshot at the higher levels anyway. It’s far more important that you just blind anything and everything you identify as a potential threat to prevent those oneshot hits from occurring in the first place. Don’t bother with Poison Cloud and Ice Storm unless you’re aiming to farm the lower levels with a little bit faster status generation.

If Arachlich is alive to revive fallen allies, it should be the one to do so. If both Thornish and Nightwing are dead, revive the Nightwing. Have Nightwing revive the Thornish with a Phoenix Serum. Then have Thornish (Mega) Protect the Arachlich.

Final Thoughts
My goal in sharing this information is to explain the thought process behind the monsters used, why they are capable of doing what they do, and the types of synergies you may want to look for when building your own Arena teams.

I don’t know that this is even the most “optimal” variant of this setup, but so far, it’s the best I’ve managed. I have tried many different equipment setups and a few different skill trees, and at one point even had Akhlut in place of Nightwing, but ultimately, this is the composition that got me to 200. I encourage you to explore, experiment, and adapt your own strategies either with this team or an entirely new one.

I do expect better players and teams to come along, and I hope that their innovations are able to streamline Arena for more consistent 200+ runs, which I fully believe is possible. I know others are reaching the 180s to 190s with completely different teams of their own, and I hope people continue trying break this barrier. It’s tough, but we can do it together. 🙂