A list of known secrets, easter eggs, hidden places and various other optional things in the game, as well as a couple general tips. 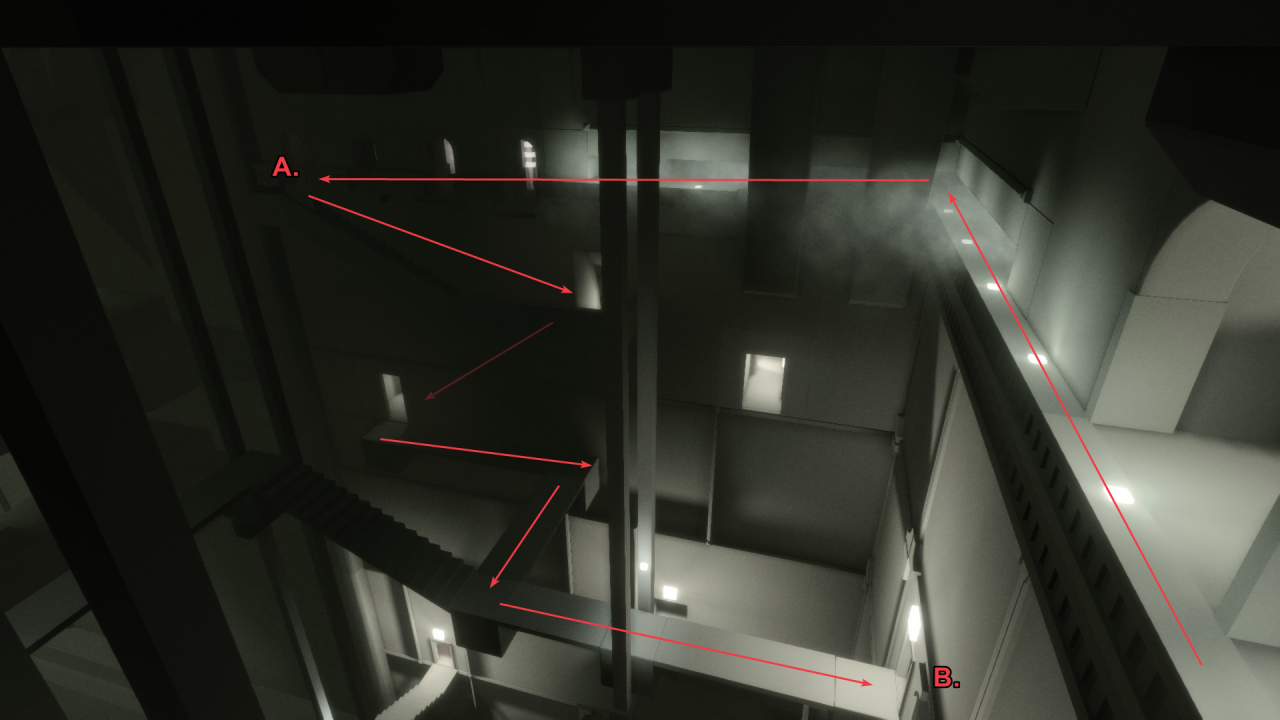 From your starting position after loading the save, proceed through the level normally, following the arrows. When you reach point A, enter the dark door and you’ll find what appears to be a strip bar. 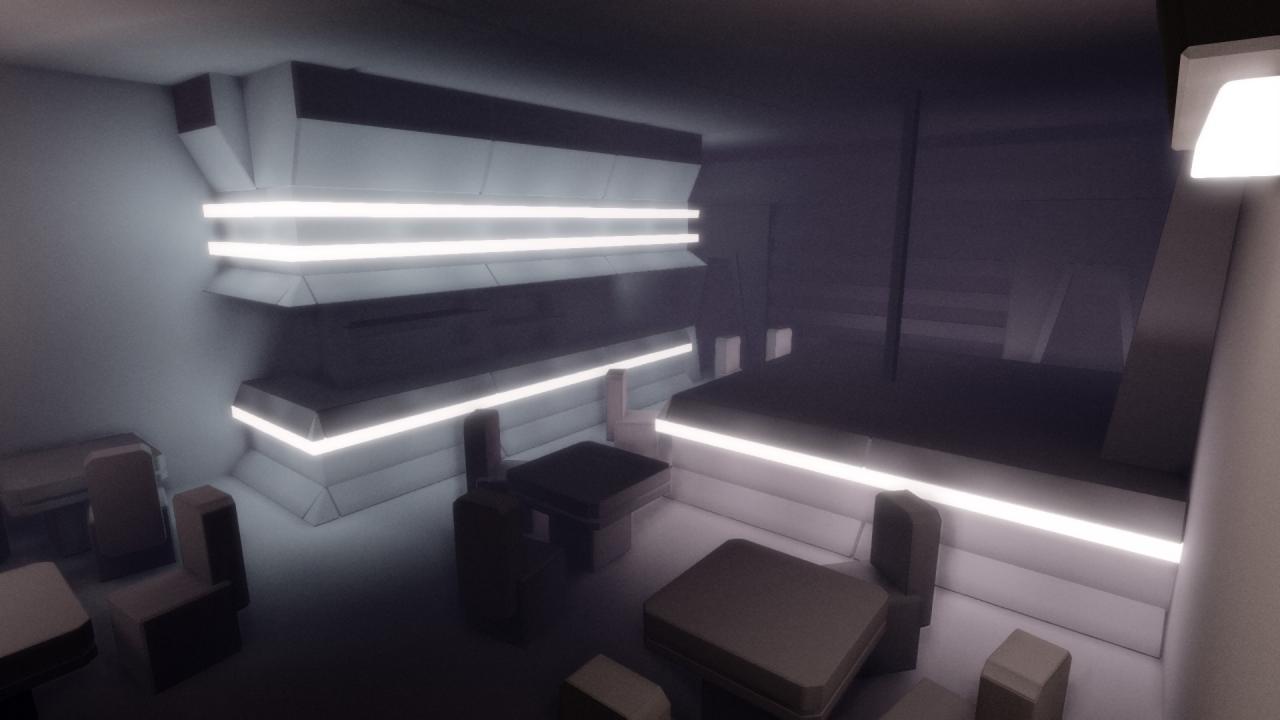 Follow the guide from the previous secret and this time get to the door labeled B. Once you do, go left. You’ll see an entrance to a room that seems to be oriented in a weird way as opposed to those around it. Once you enter it, you will be shifted to the side, emerging from a wall instead of the door you just came through. 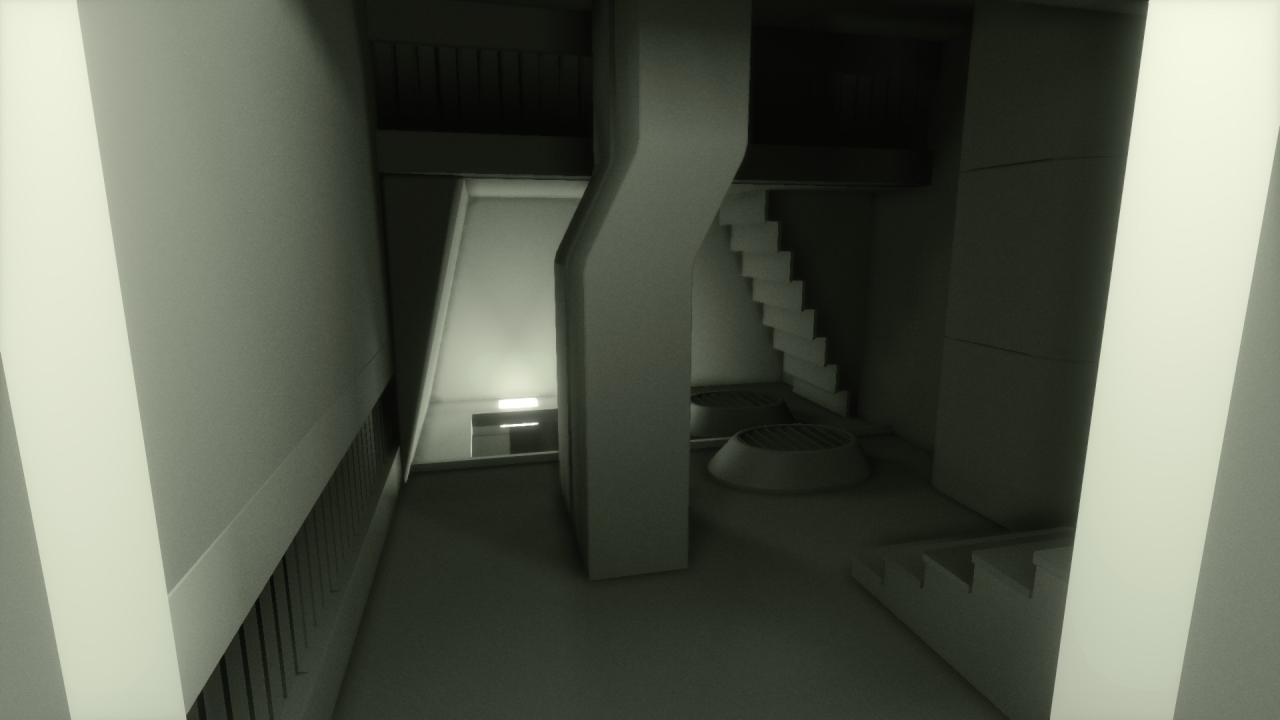 Same location as the previous secret, but this time head to the right. At the end of the corridor you’ll find a door with a slight opening under it, touching it will open it up some more, allowing you to crouch under it. This leads to a comfy room with two computer screens, a bunk bed and a Totoro doll. Entering the room will slow you down significantly and make jumping uncontrollably pull you in a random direction. The effect will wear off if you manage to leave the room. 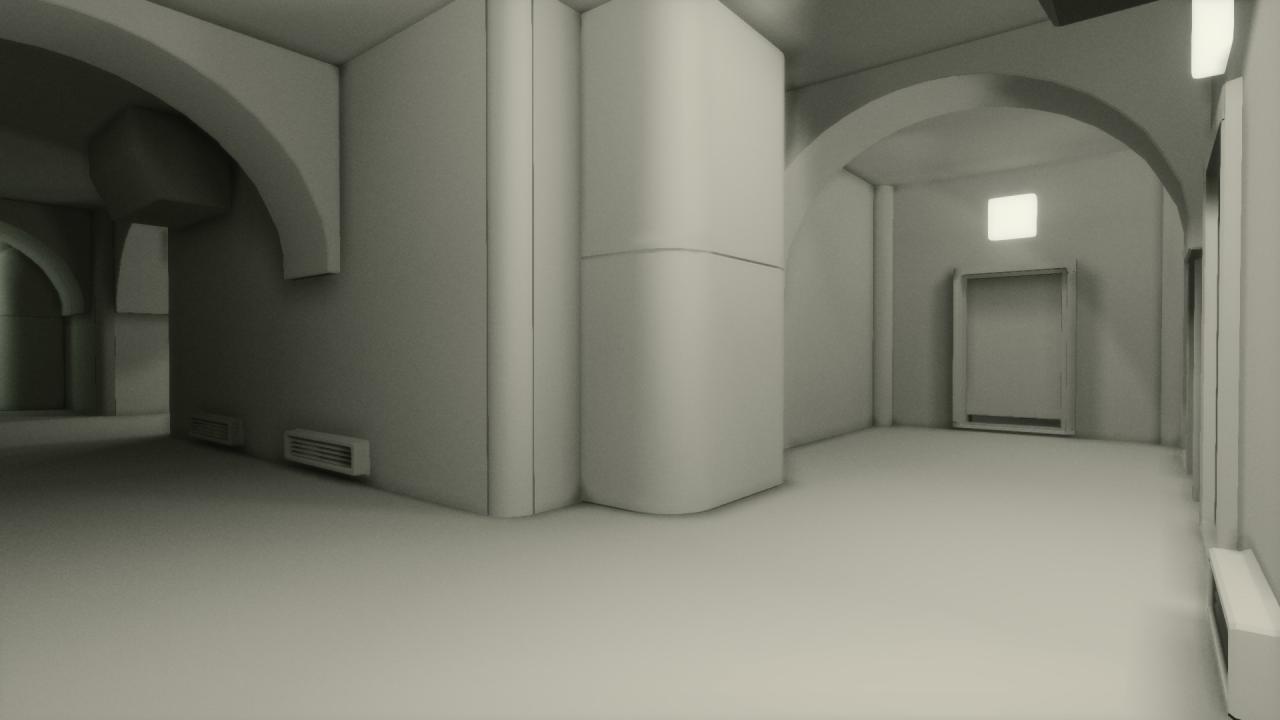 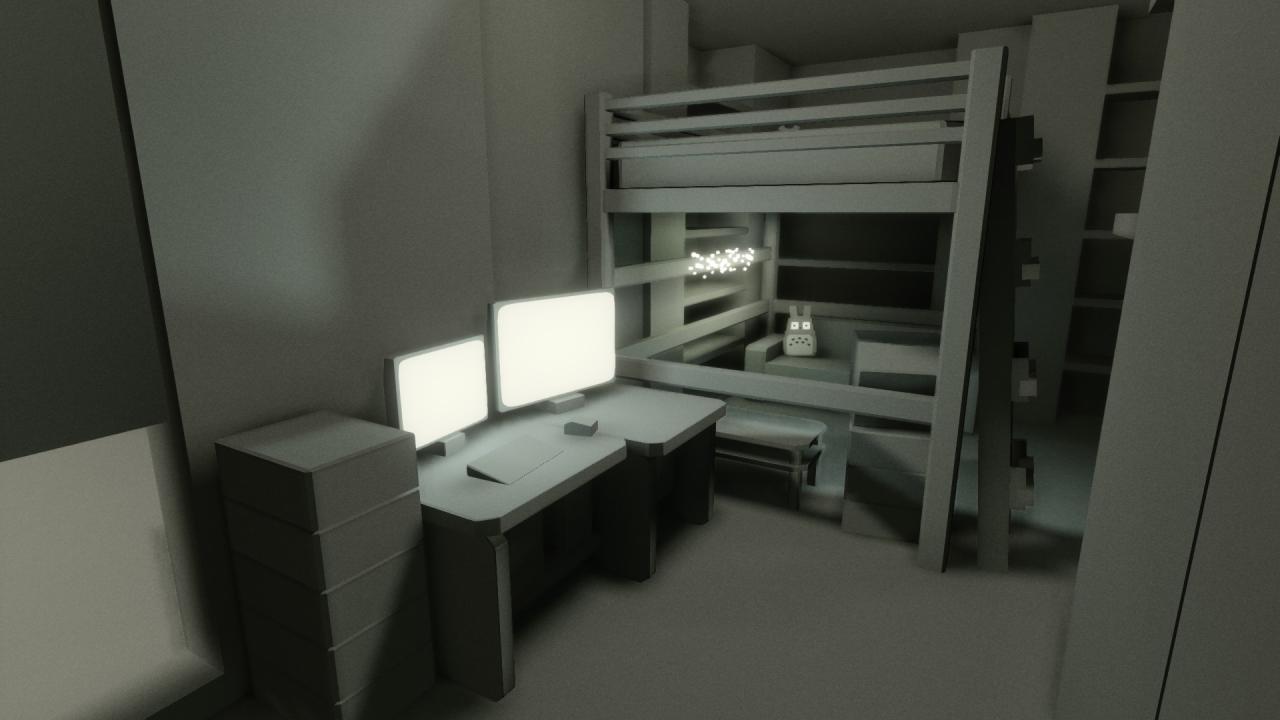 This is the view from the point labeled A on the previous diagram: 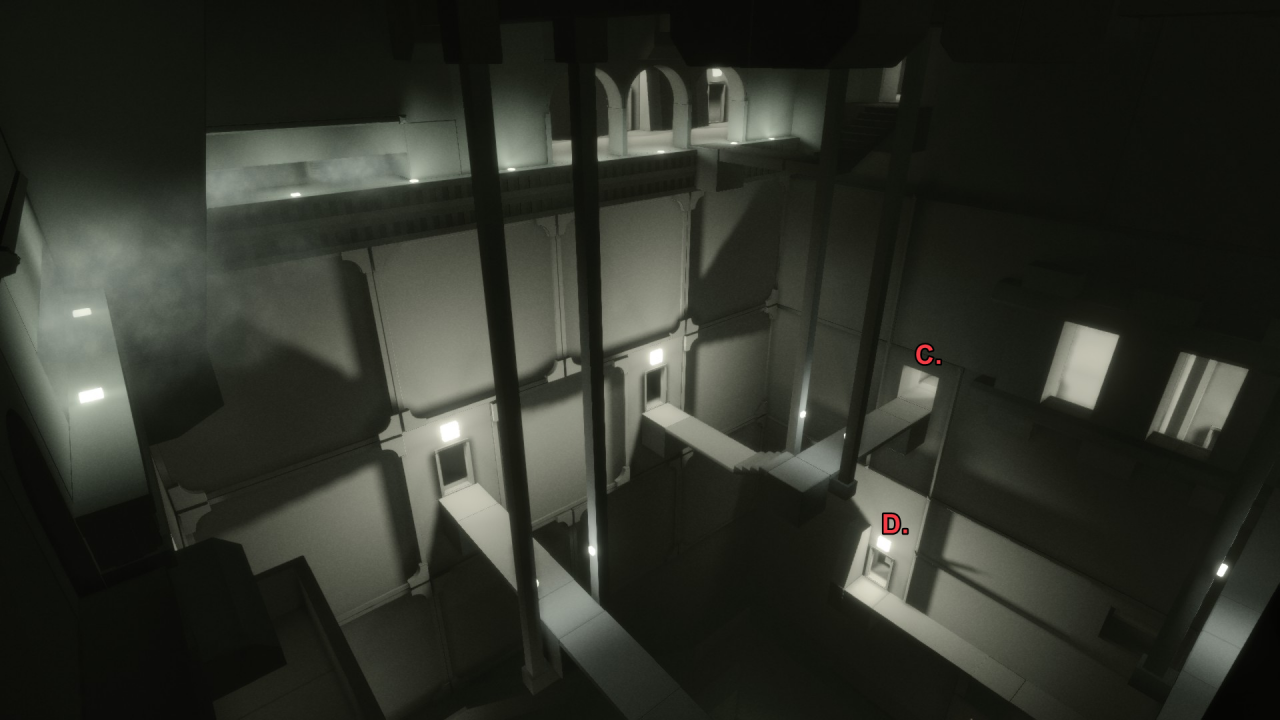 Make your way towards either door C or door D, as they lead to the same stairwell. At the bottom of this stairwell, behind the stairs, there’s a corridor leading to a pinkish room with multiple doorways. One of the doors leads to a hallway that loops around in an impossible non-euclidean manner, while another opens up into an enormous flat expanse stretching into the darkness. 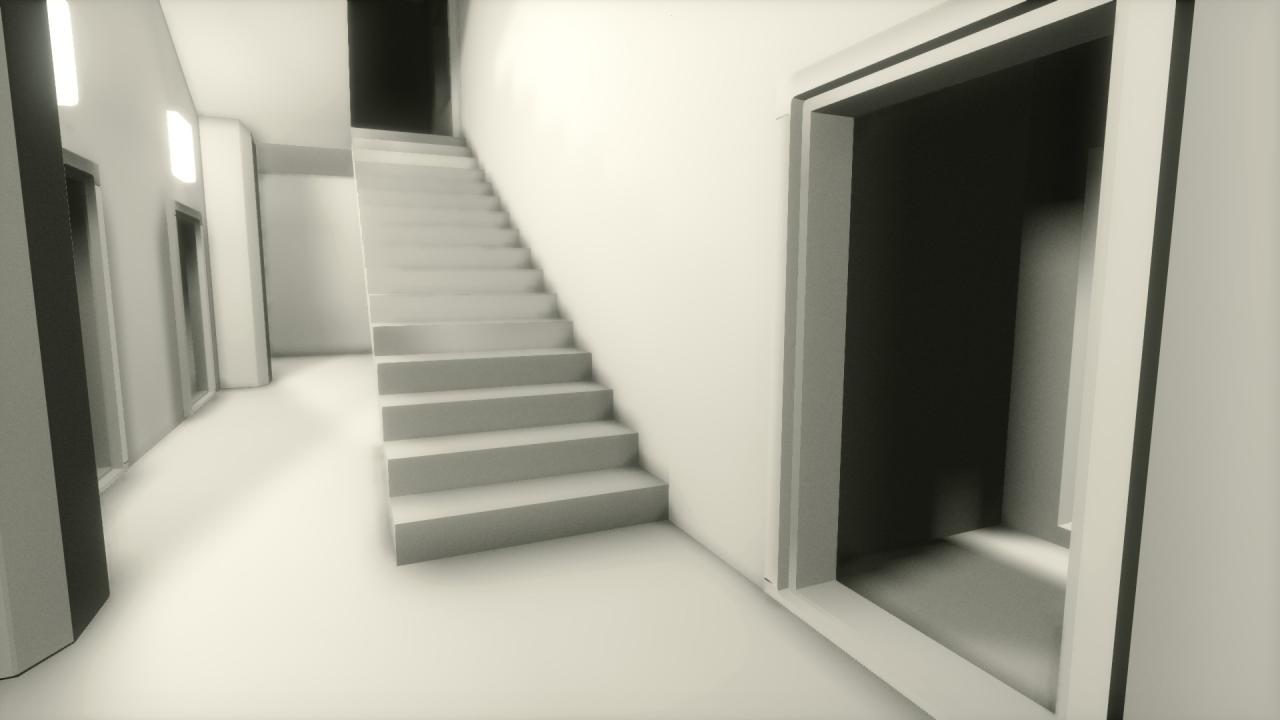 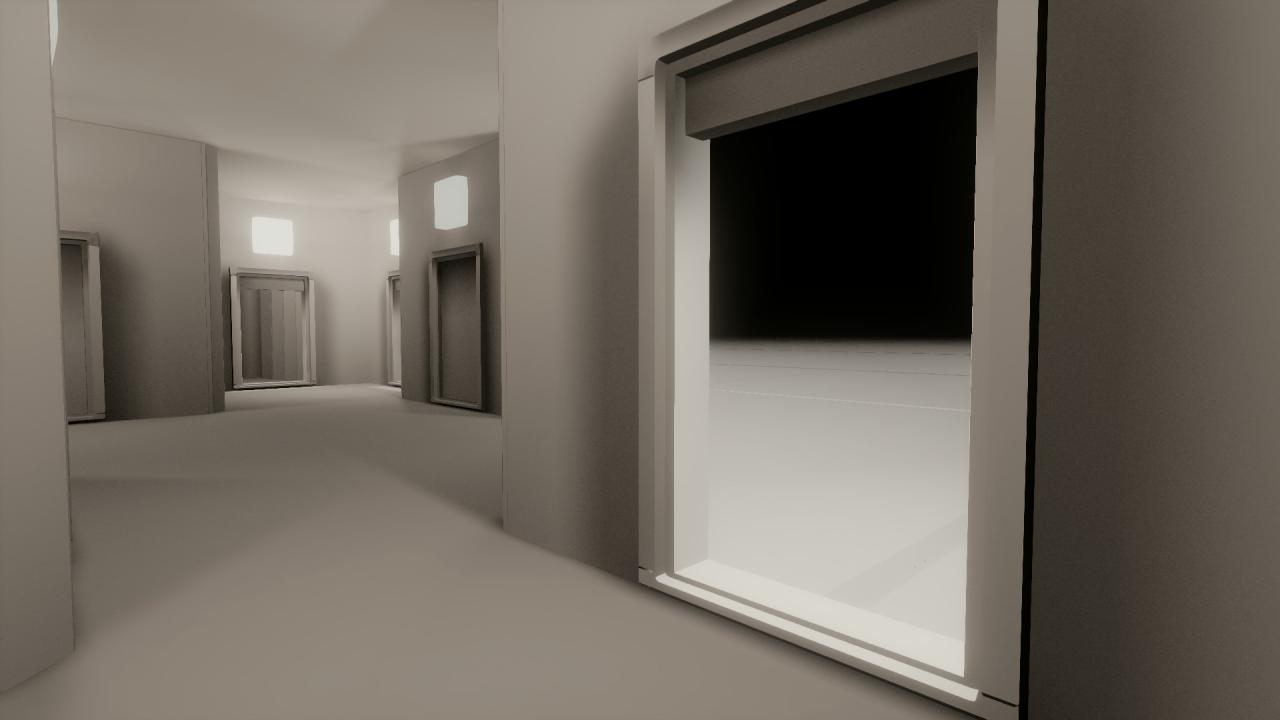 Proceed through the level normally until you cross a bridge with two doorways at both ends. After that, turn left and on a balcony you’ll find a door with an opening underneath large enough to crawl through. Proceed through it and eventually you’ll find yourself in the hidden stairwell. Once you ascend or descend a flight of stairs, the stairwell will loop and the door closes shut. To escape the stairwell,notice that a beeping sound periodically plays in response to your actions.You will need to stand still, without moving or looking around – this will make the the beeping sound repeat faster and faster until it eventually flatlines and the door unlocks. 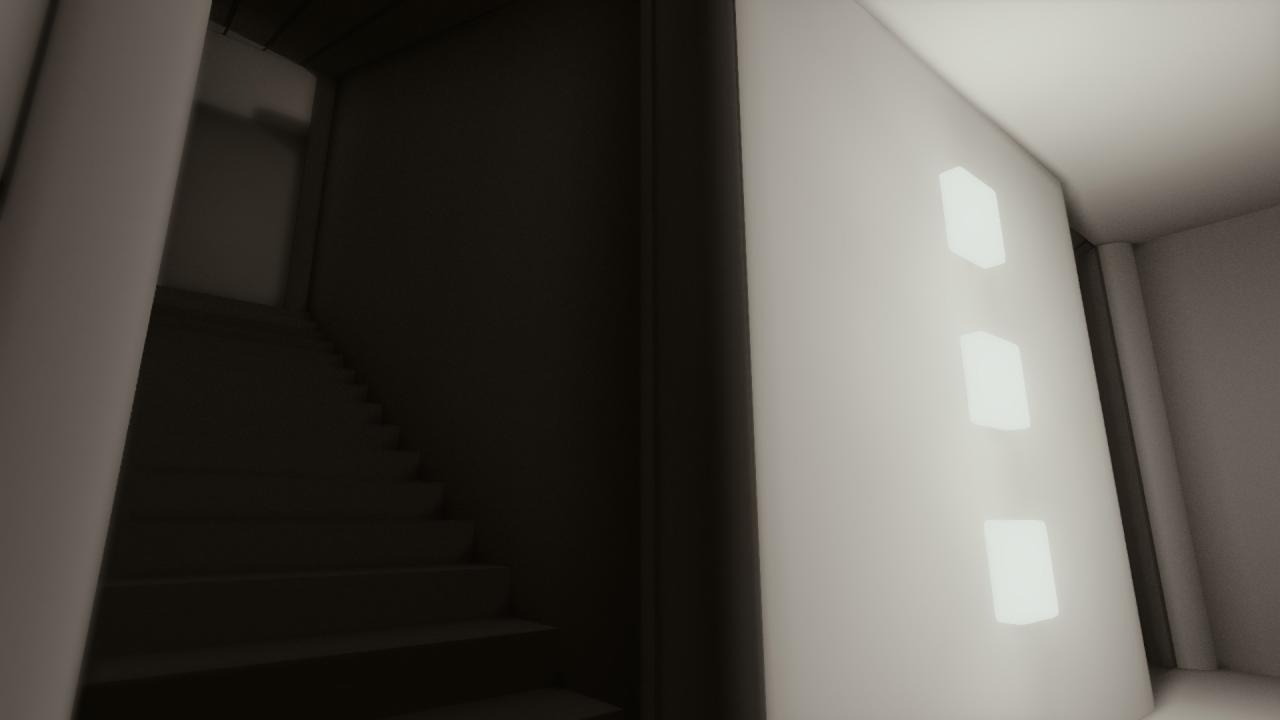 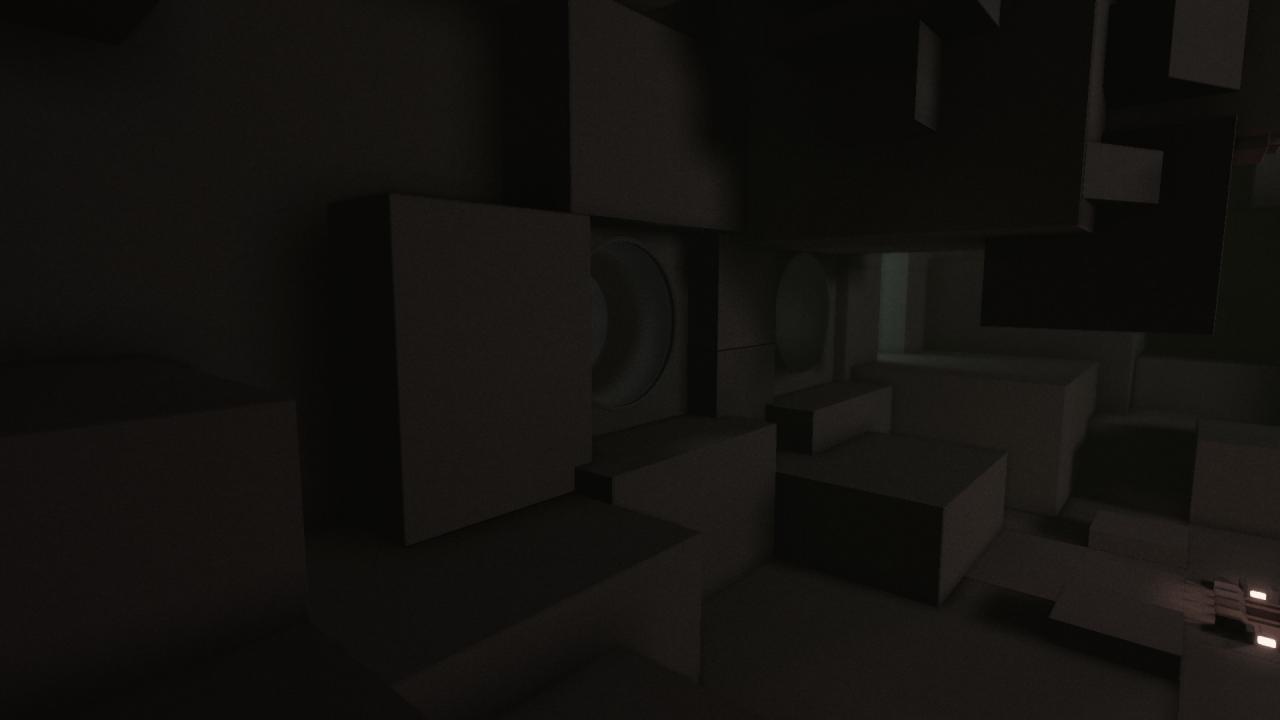 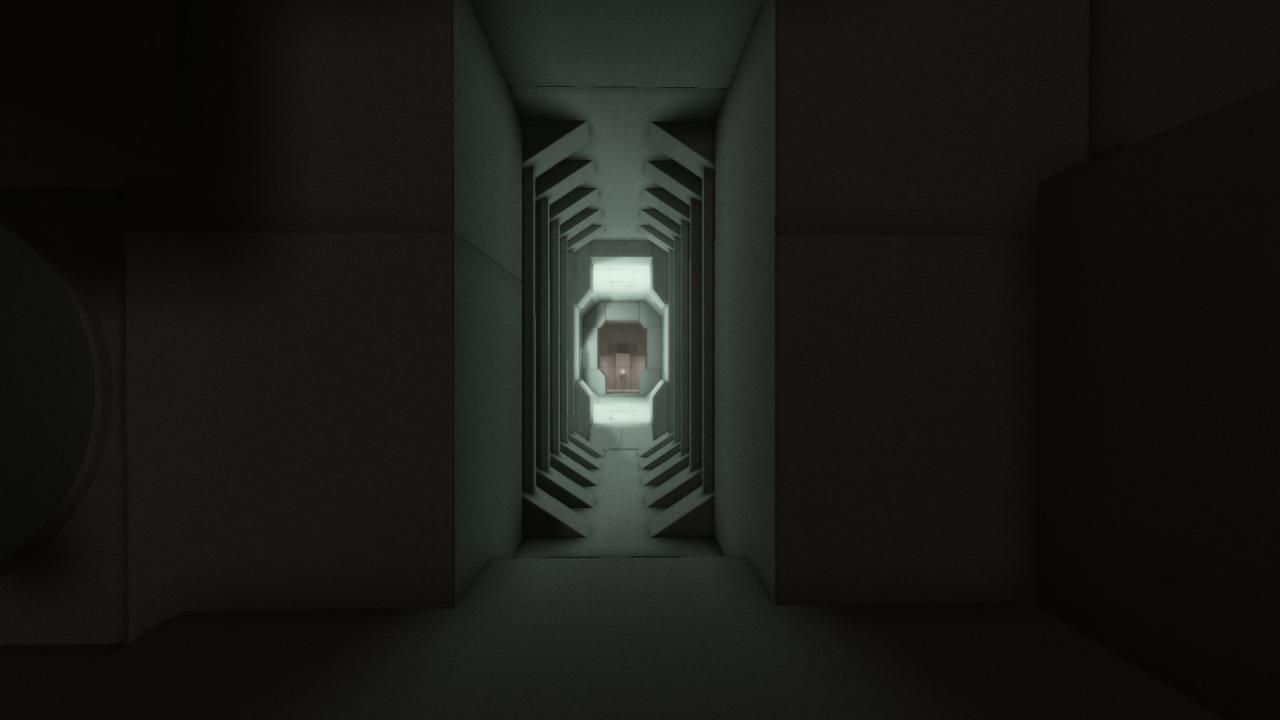 From the starting point, go straight forward hugging the left wall until you reach a large opening with greenish light coming out of it. Walk inside and at the end you’ll find two doorways, one on the left and one on the right. Take the left one and eventually you’ll find yourself in an ornate orange-tinted chamber with no apparent purpose behind it. 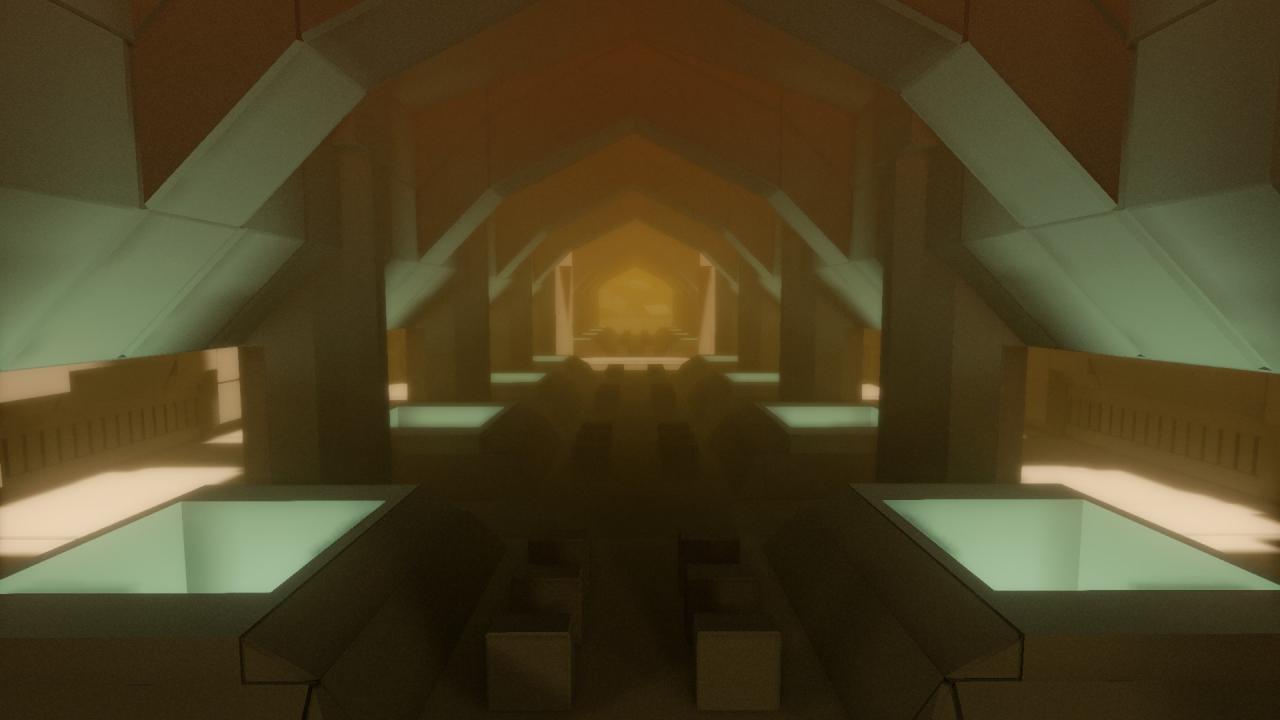 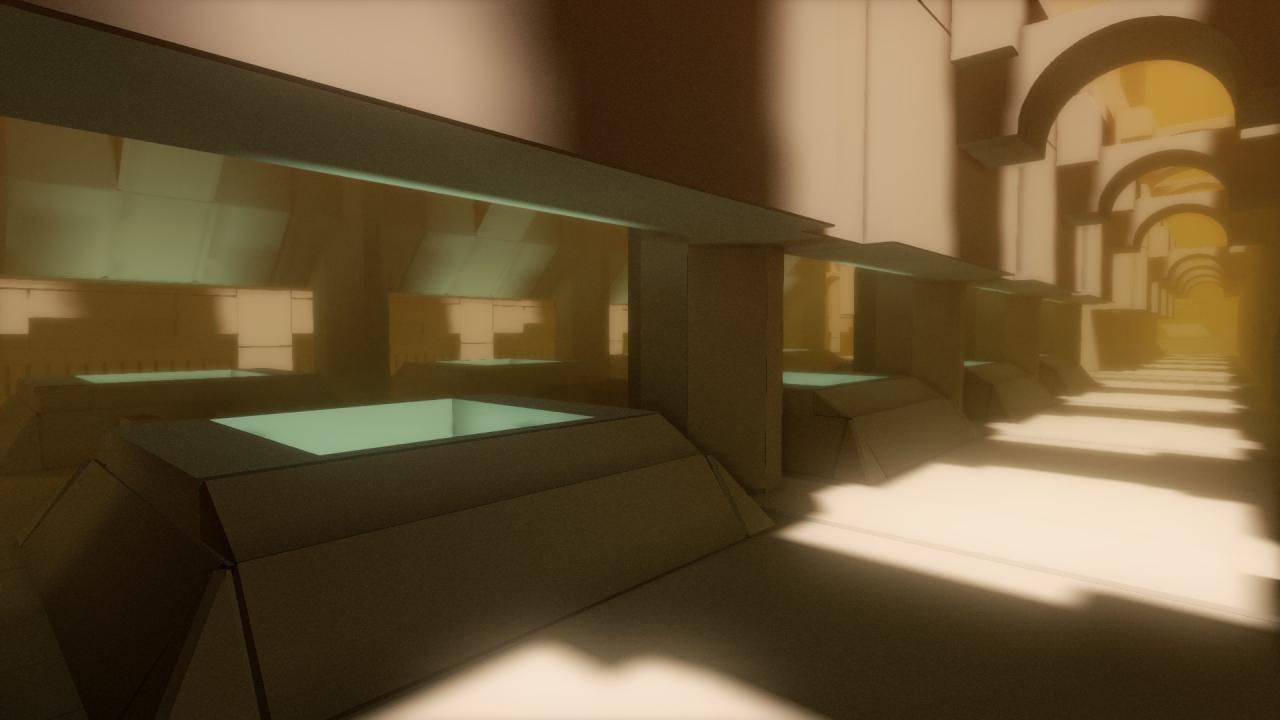 Same as the previous secret, but enter the door on the right instead. Several messages will appear telling you to turn back, and just before you reach the end of the hallwaythe game will crash. 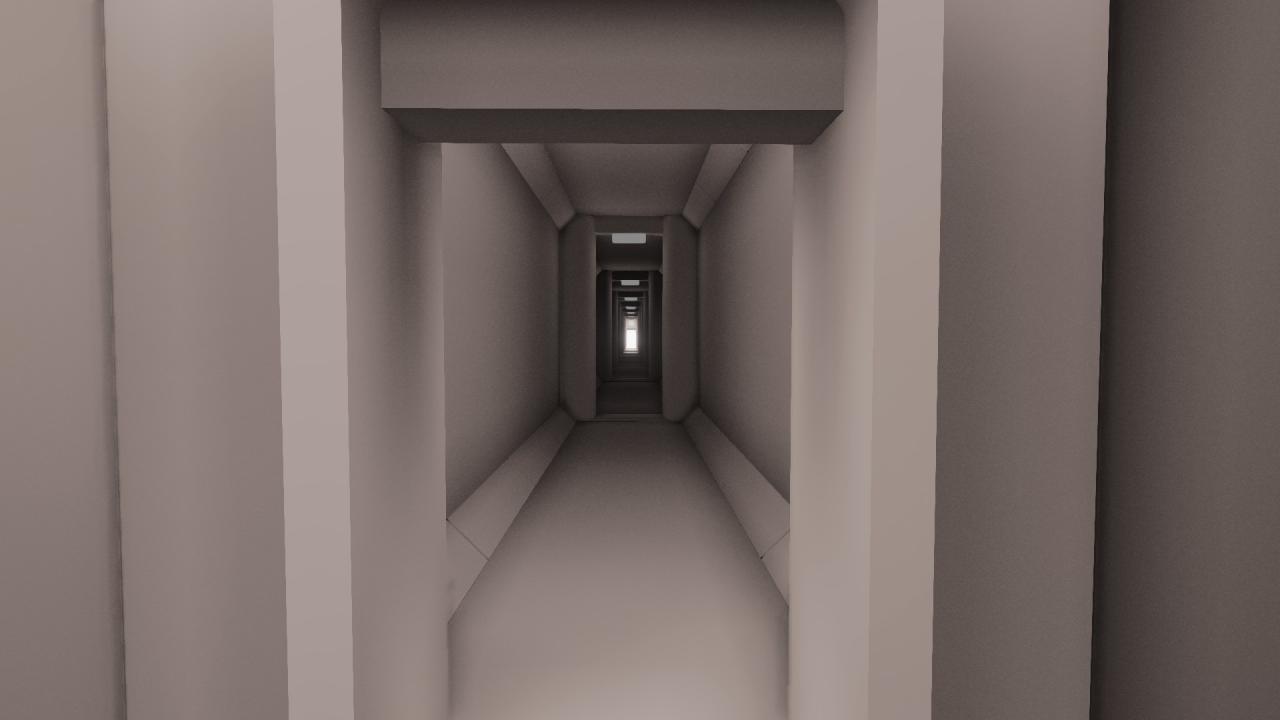 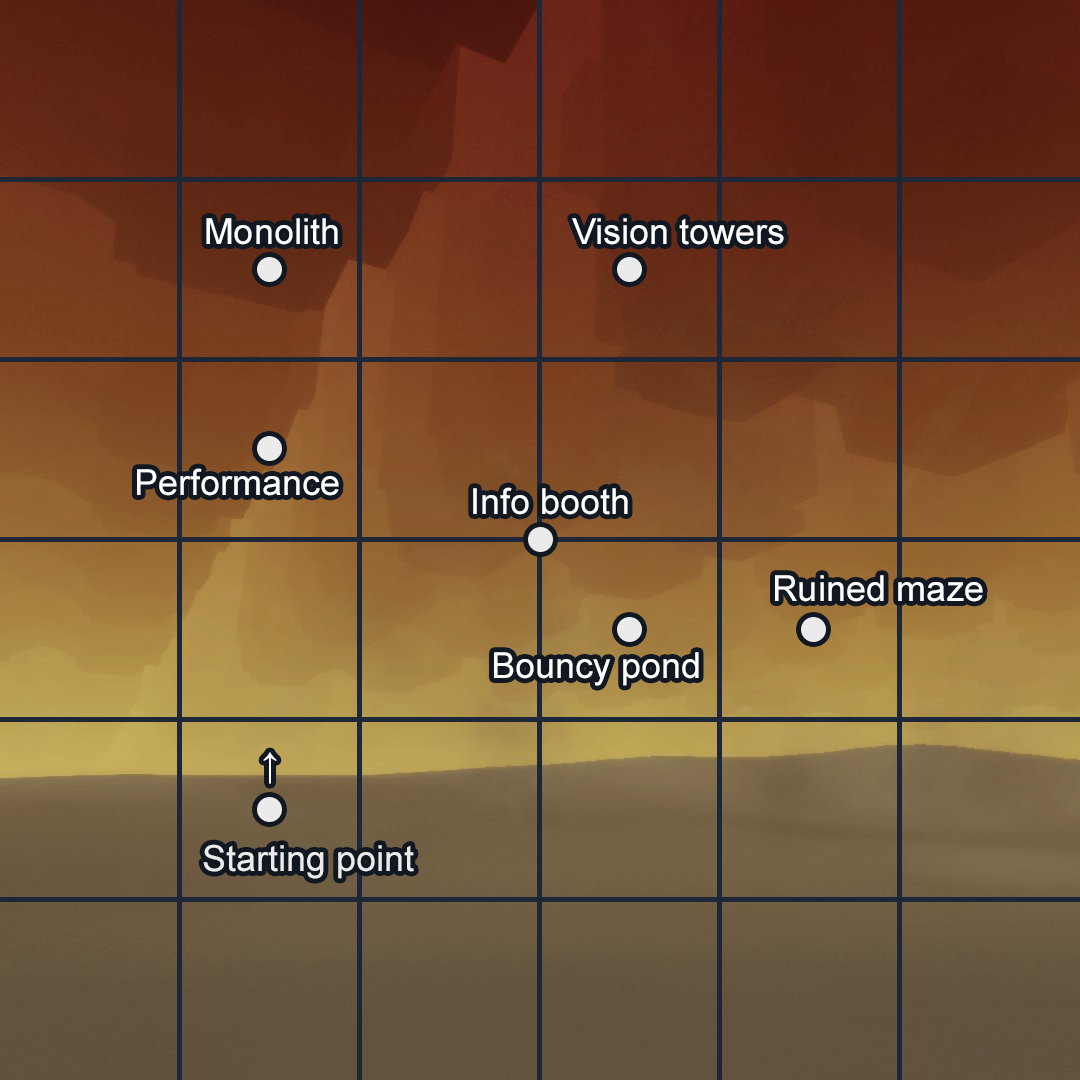 This is a very approximate map of the desert in Chapter 6: Endless Dive. Note the giant blocks hanging overhead – the desert is square-shaped and exactly 6 blocks across, so we can use them as reference for navigation. For example, to get from the starting point to the info booth, you have to walk one and a half blocks up and one and a half blocks right. You can look up and use the blocks to confirm your relative location at any time.

In the dead center of the desert, there’s a stone altar with buttons and diagrams on each of its four sides. Pressing the buttons will show you a stylized guide on what to do to complete this level,namely to jump down from the edge of the desert. 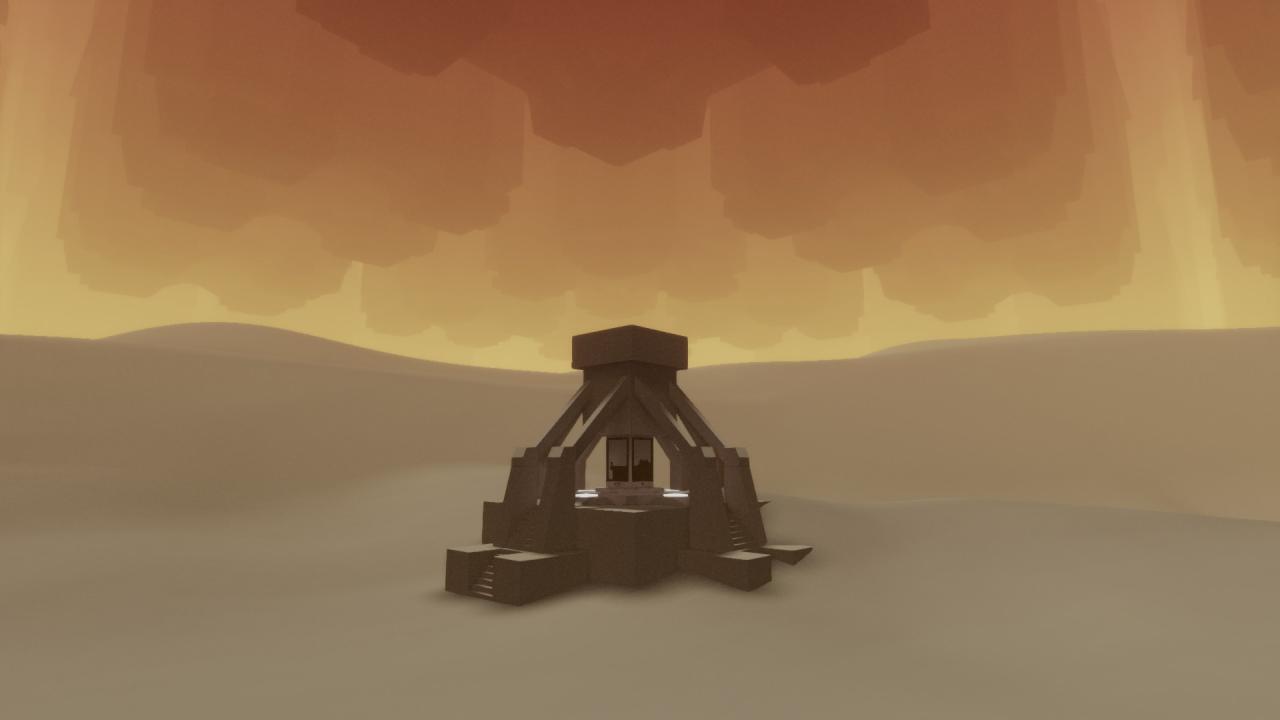 Fourth column, fourth row of the blocks, close to the info booth. It’s a circular pond with a bulbous shape in the middle. Walking around the pond will send 3d waves over the water, and jumping onto the central shape will bounce you back. 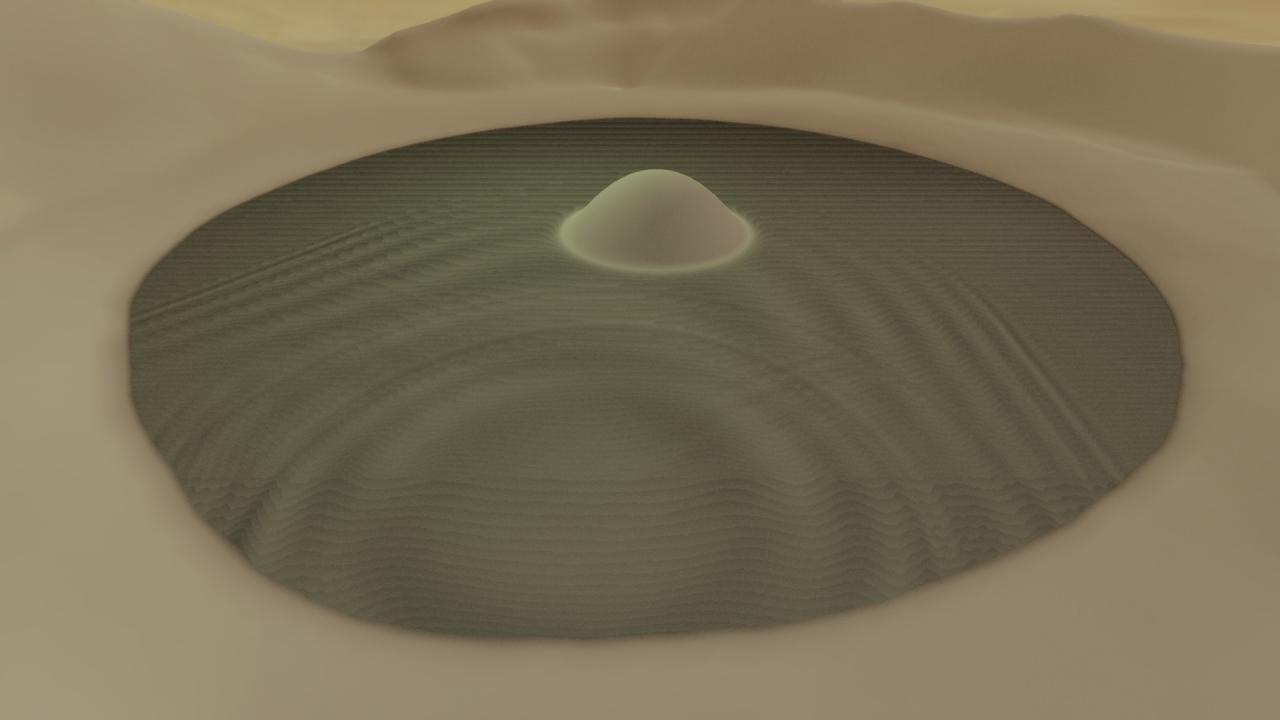 Second column, third row of the blocks. There’s a stone pedestal surrounded by elaborate structures. Standing on the pedestal will trigger a musical performance, with surrounding objects moving in rhythm to the tune. Eventually, a black floating comet-like object will appear and start circling the area, followed by a white one. As the music ends, both of them will fly away into the sky and disappear behind one the blocks. 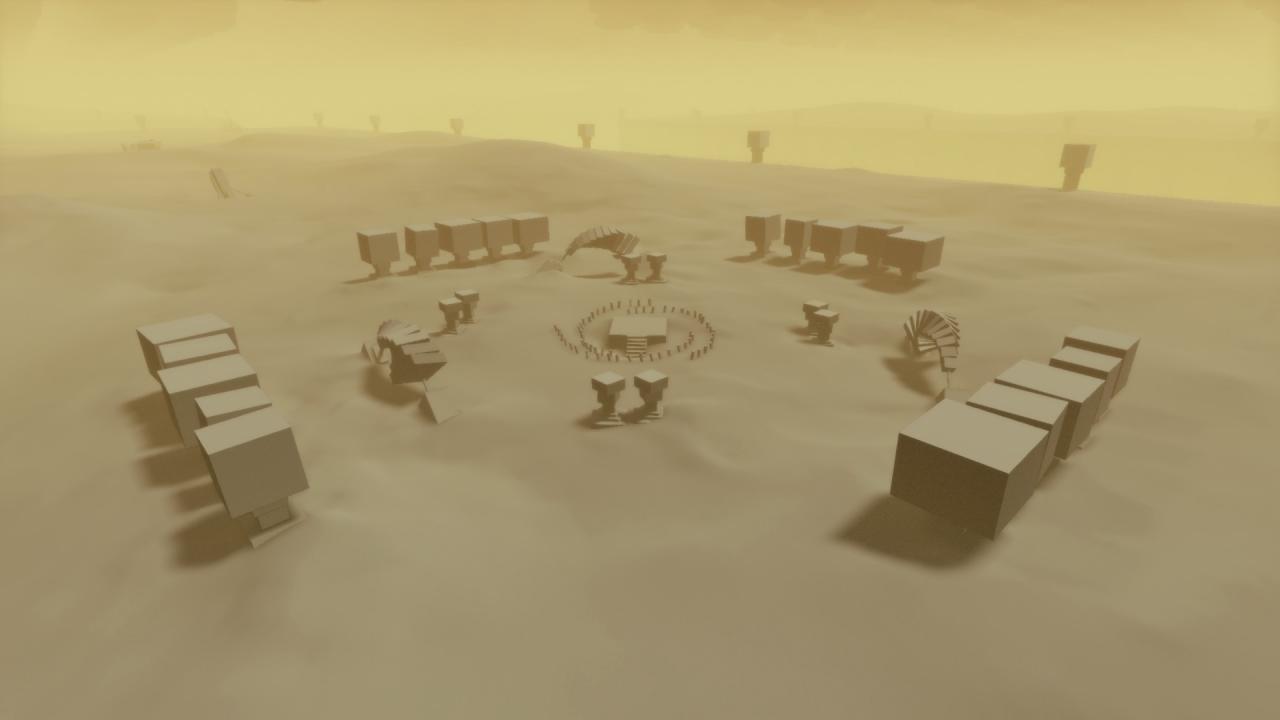 Second column, second row of the blocks. A pitch black monolith stands at the foot of an unusually large sand dune. The monolith emits a loud high-pitched noise when touched, and after a short while, teleports the player into another location near the center of the desert. 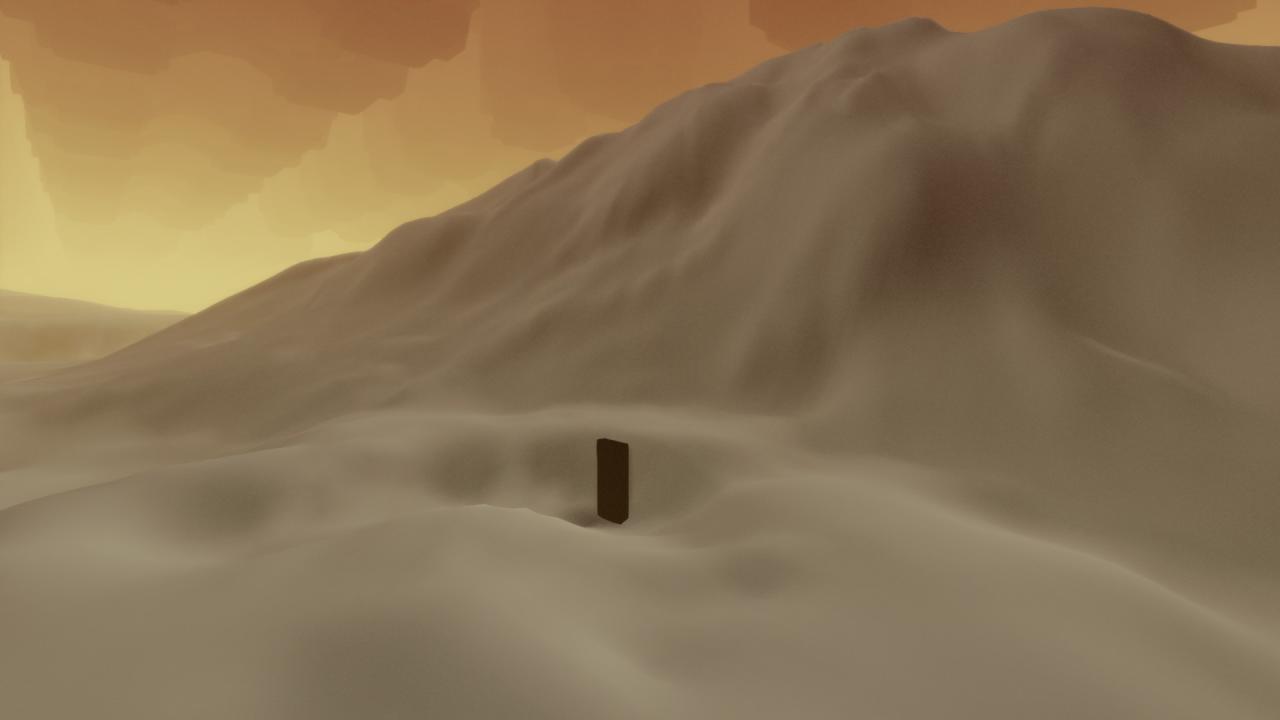 Fourth column, second row of the blocks. Three towers of different sizes jut out of the sand, with pillars, stone slabs and turtle-like cube creatures scattered around them. You can use the creatures as makeshift elevators to traverse over the ruins and eventually climb all three towers. Standing on the top of a tower will heavily distort the colors that you see. 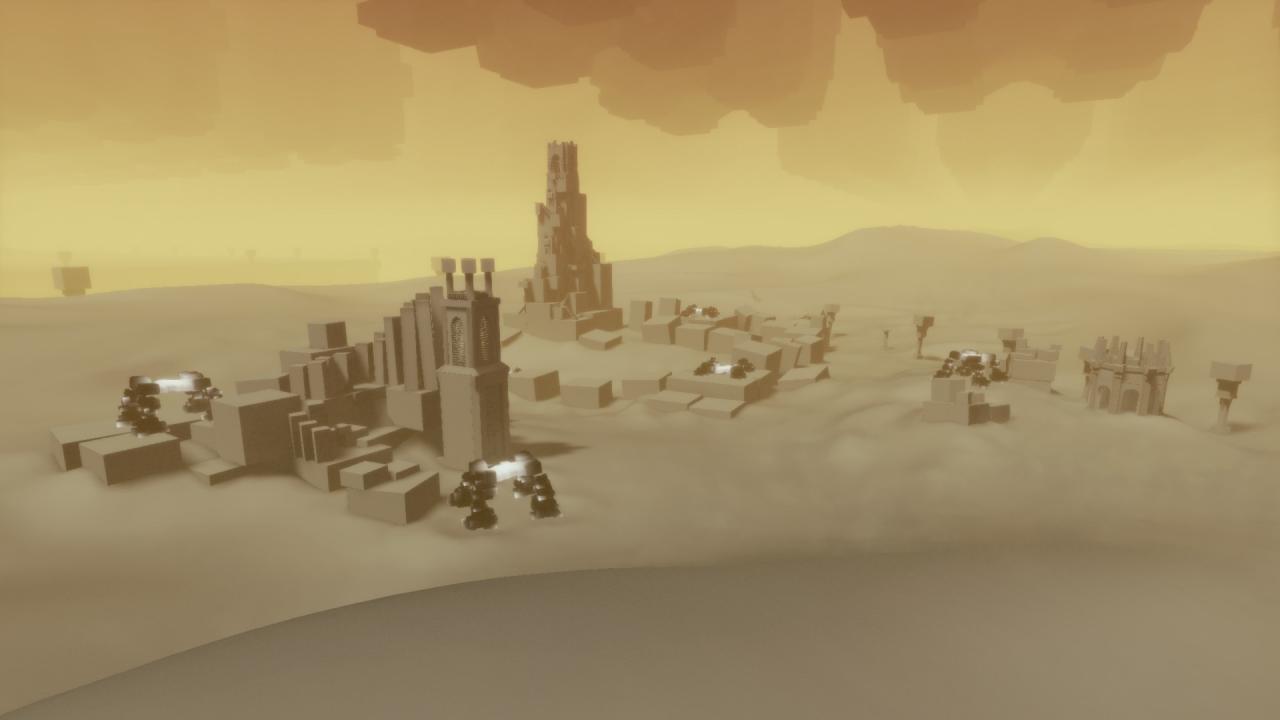 Fifth column, fourth row of the blocks. There’s a large ruined building, with a set of stairs leading to a brightly glowing doorway. Entering the doorway will drop you into a maze that phases between the building’s current ruined state, its pristine white state, and its flat floor plan. The amount of time between these shifts changes relative to the distance to the exit, essentially making it a game of hot and cold. 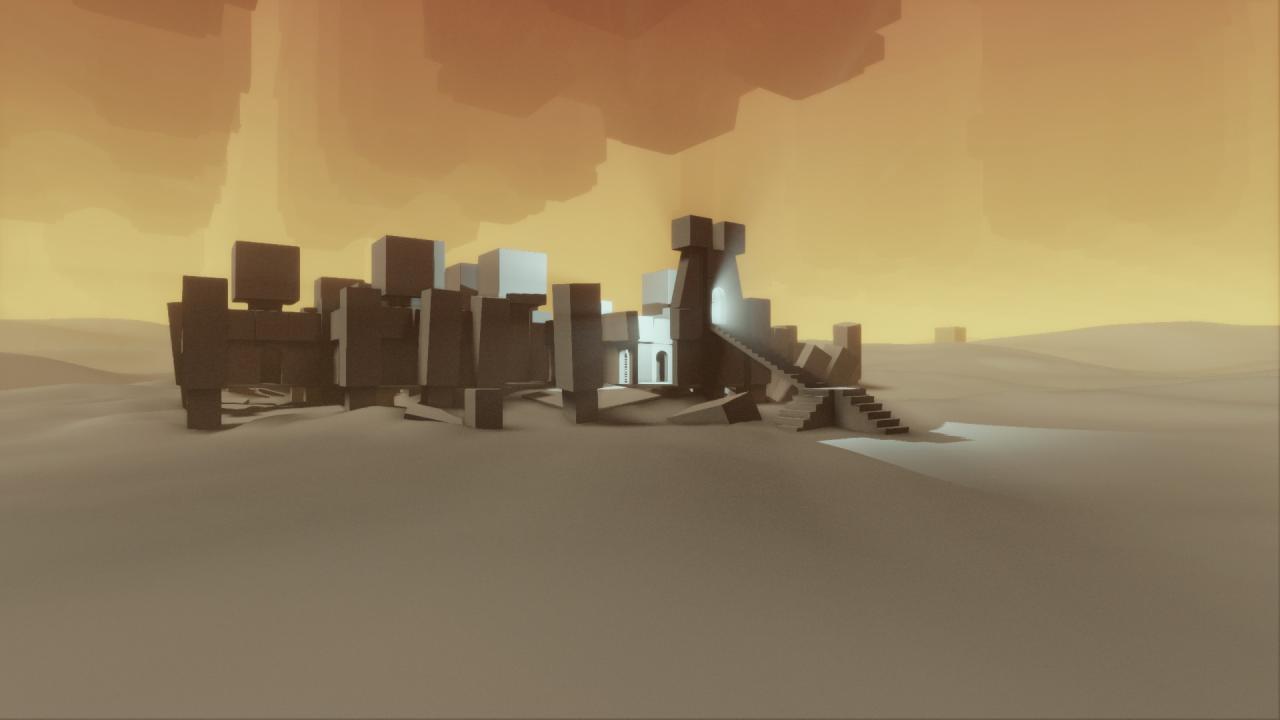