The Getting Started Guide describes the basics of the game like Winning and Losing Conditions, how to Construct Buildings, Exploring, Creating and Mobilizing Units, Production and Trade, Increasing Your Population etc.

1. Game Basics
Planet Colonization is a society management and colony building game with strong weighting on economics. You control one of 4 colonies that strive to conquer the exoplanet and overcome the rivals.

To Start a Game
Click the New Game button and the pre-generated colony name and planet name are shown. You can change these to find new game environments or to replay interesting ones you have previously found.

2. Winning and Losing the Game
You win the game if all of the three rival colonies are defeated. A colony is defeated if it loses its value or if there are no colonists left.

You also lose the game if there are no colonists left. This can typically happen because all of the residential buildings are destroyed in a war or the colonists leave because of unfavorable living conditions.

3. The Beginning
In the beginning of the game you have the initial buildings for accommodation, industrial production and units at the Vehicle Base to start expanding the colony. Your goal is to build a powerful colony capable of dominating the economy and overcoming the rival settlements. When the game starts, you can see only a small part of the planet and you don’t know where the other colonies are. 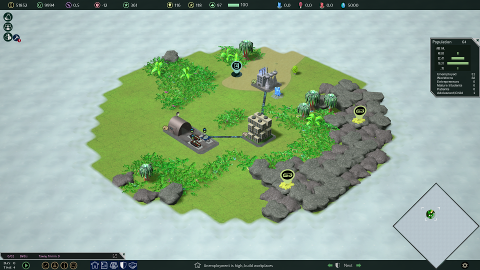 To build and expand your colony you need to take care that the financial situation stays healthy throughout the time. The building materials are bought from the market, so you don’t necessarily need to produce them by yourself.

To connect new buildings to the colony you however need to collect the resource called Aether after the initial reserve is used. An Aether drop can be seen on the picture below. 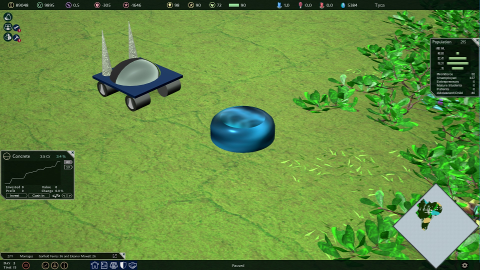 The first thing you should do is set the tanks to protect the buildings from the alien lifeforms that may be very harmful in any stage of the game. You can then start exploring the surrondings by moving the explorer into the unexplored area.

To Move a Unit
Left-click the unit, and then right-click any passable location on the map. If the location is passable the targeting symbol is blue, otherwise it is red. 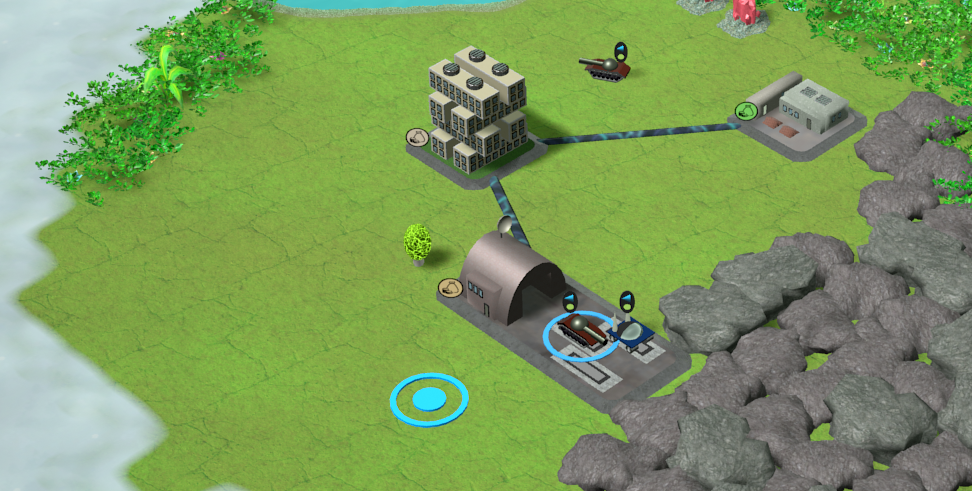 4. Collectable Items
As you explore the planet, you discover items having alien energy that strengthens your colonists. Red Crystals give bonus to colonists’ morale and Blue Crystals improve their knowledge. Fungus strengthens the colonists’ practical skills. Aether is needed to connect new buildings to the colony. The amount is shown on the top of the screen.

To Extract Items
Left-click an Explorer, then right-click a Blue Crystal, Fungus, Red Crystal, or Aether. 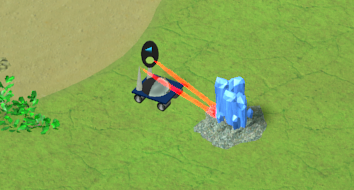 5. Increasing the Population
The more colonists you have, the stronger your colony is. The population can grow by two ways. The colonists naturally start families and have offsprings who will grow up and eventually join the workforce. Every now and then there are also space travelers around who are willing to join your colony for a fee.

To Hire New Colonists
When there are colonists available to join the colony, the Hire Colonists button (rocket symbol) is visible in the upper-left corner on the right side of the Society button.

Click the button to open the list of colonists that would like to join. You can then decide if you accept the fee they are asking. 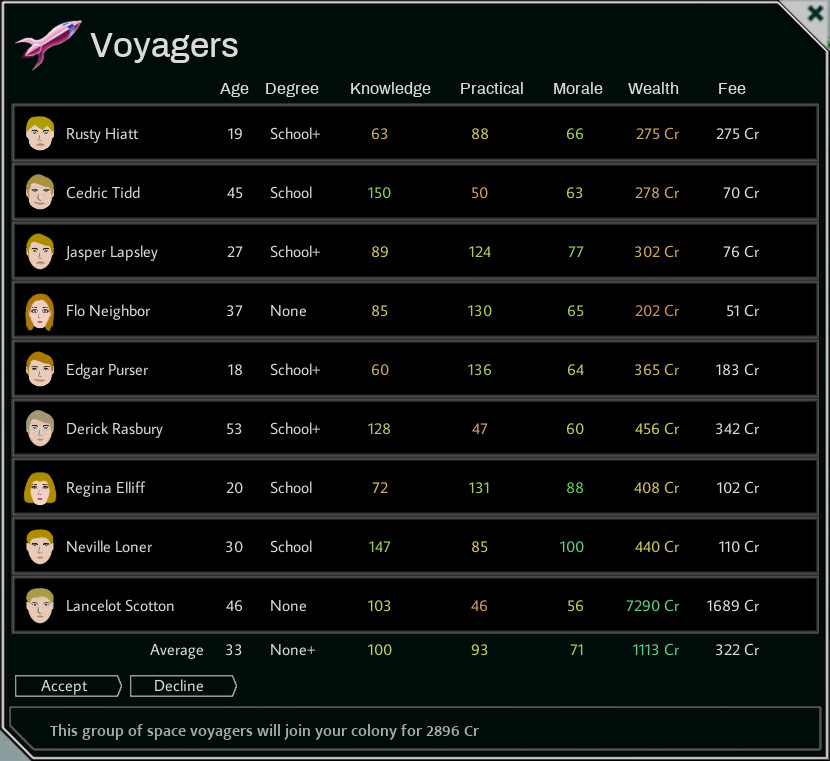 6. Supporting Your Population
As your population grows you need to build more housing to support it. Each Apartment House has room for 85 colonists. If there are more colonists than that in a single Apartment House, it has a significant negative impact on the colonists’ morale. The colonists prefer to live in Habitation Modules that offer residency for one household. 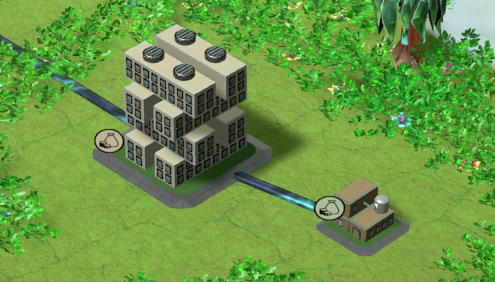 The population panel in the upper-right corner of the screen shows your current population, age distribution and the colonists’ occupations.

To Build an Apartment House

1. Click the New Building button on the bottom of the screen to open the Buildings Panel: 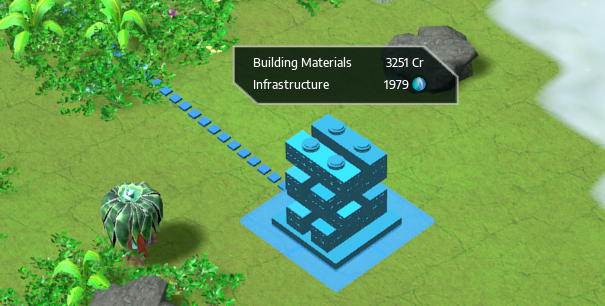 You can see how much the building materials cost and how much Aether is needed. If the building is blue, it can be build. If red tiles are shown instead, then it cannot be build there and you can try a different spot.

7. Constructing Buildings
There are four different classes of buildings: Civic, Raw Material, Industrial and Strategic. All of these are important, but they have different characteristics. Civic buildings are built for accommodation, education and health care. Raw Material and Industrial buildings are for creating workplaces and generating income for both the colonists and the administration. Strategic buildings are needed to provide security and combat force for the settlement.

To Choose What to Build
There is significant information on the building selector which should be taken into account when choosing the next building to build:

After you have made the decision you can construct the selected building the same way as in the previous Apartment House example. Please note that Raw Material buildings require suitable construction site. For example, a Mine can be built only on a Boulder Field containing Ore.

8. Exploring
In addition to harvesting, you can use your Explorer to discover more surface. Keep an eye out for resources (Oil, Limestone and Ore), vegetation, water, rival colonies and more collectable items. When you are exploring, you should watch out for Slimes that emerge from vegetation. It may be a good idea to explore the vegetation together with a Tank. The Tank can shoot the Slime which then turns into Aether drop that can be harvested. 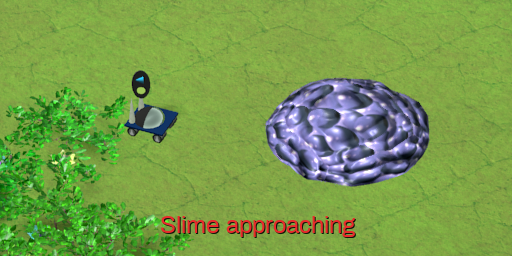 The Explorer has also the Auto Explore functionality. When you use it, the Explorer begins to scan the surroundings by itself and if it encounters a Slime it will try to evade it automatically.

9. Creating and Mobilizing Units
Explorers, Tanks and Hovercrafts are produced in Vehicle Factories (Select Strategic types from the New Building Panel). You can choose which unit to produce before you build the factory. 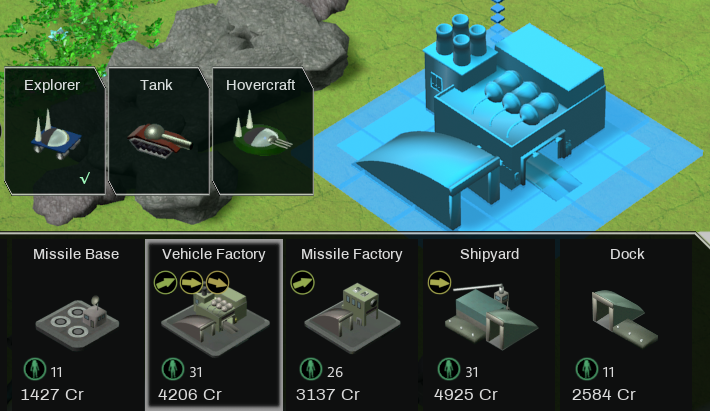 It is also possible to change the product later after the factory has been built by right-clicking the building and then clicking the unit to produce from the Building Properties panel. 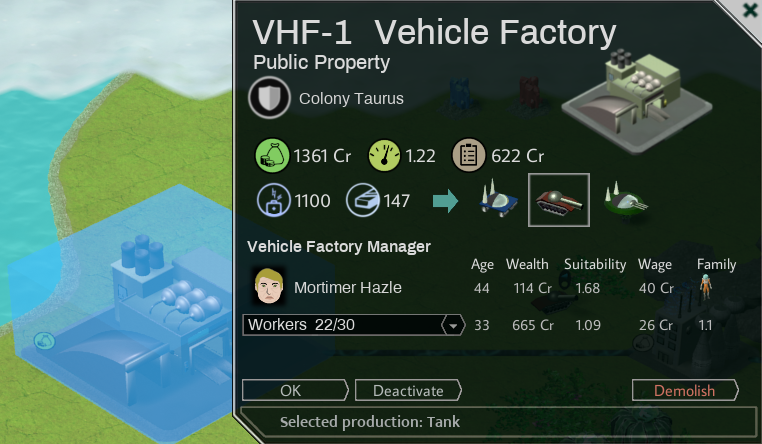 When the unit has been produced, it goes to the storage from where it can be mobilized, sold or kept there to make sure you have enough units when needed.

To Mobilize a Tank

1. Produce a Tank in a Vehicle Factory (see above).

5. Set the number of units to mobilize to 1:

The Tank is now mobilized to the default Vehicle Base. 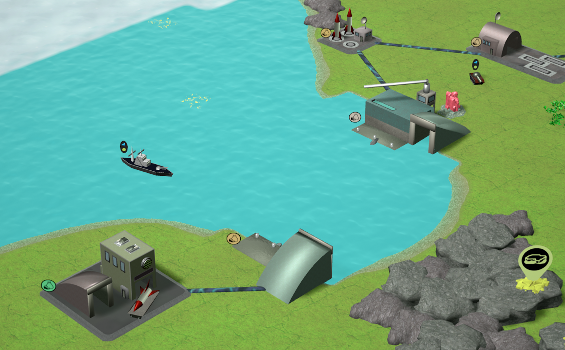 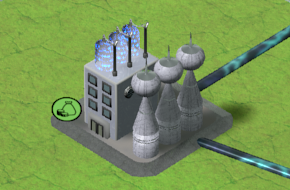 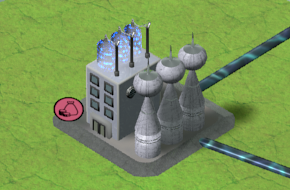 If the building is unprofitable, it may be a good idea to switch it off. This can be done by right-clicking the building and then pressing the ‘Deactivate’ button on the Building Properties panel. After this the deactivation indicator becomes visible and the building is not in operation. 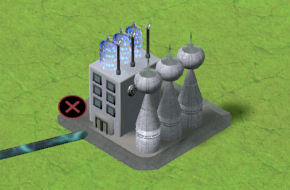 As the market situation changes the demand for the products of the building can rise higher again. A building can be activated again from the Building Properties panel (opened by right-clicking the building).

To see when it’s the suitable time to activate the building, press the Show Building Info button on the bottom bar: 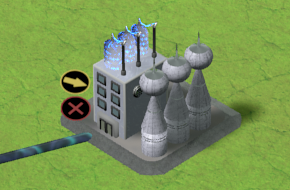 11. Trade
The buildings of your colony and the rival colonies consume and produce goods to the market. This creates supply and demand that affects the commodity prices. You can take advantage of the price changes or secure the financial position you have by making investments.

The Trade Panel is opened by clicking the Trade button on the bottom bar:

On the panel you can see the price development of the commodities and make new investments or sell existing investments. You can choose the time period of the graph by clicking the All (default) or the 1d (one day) button. The curve shows the price development of the commodity and the percentage in the upper right corner tells how significant the price change has been during the selected time period. 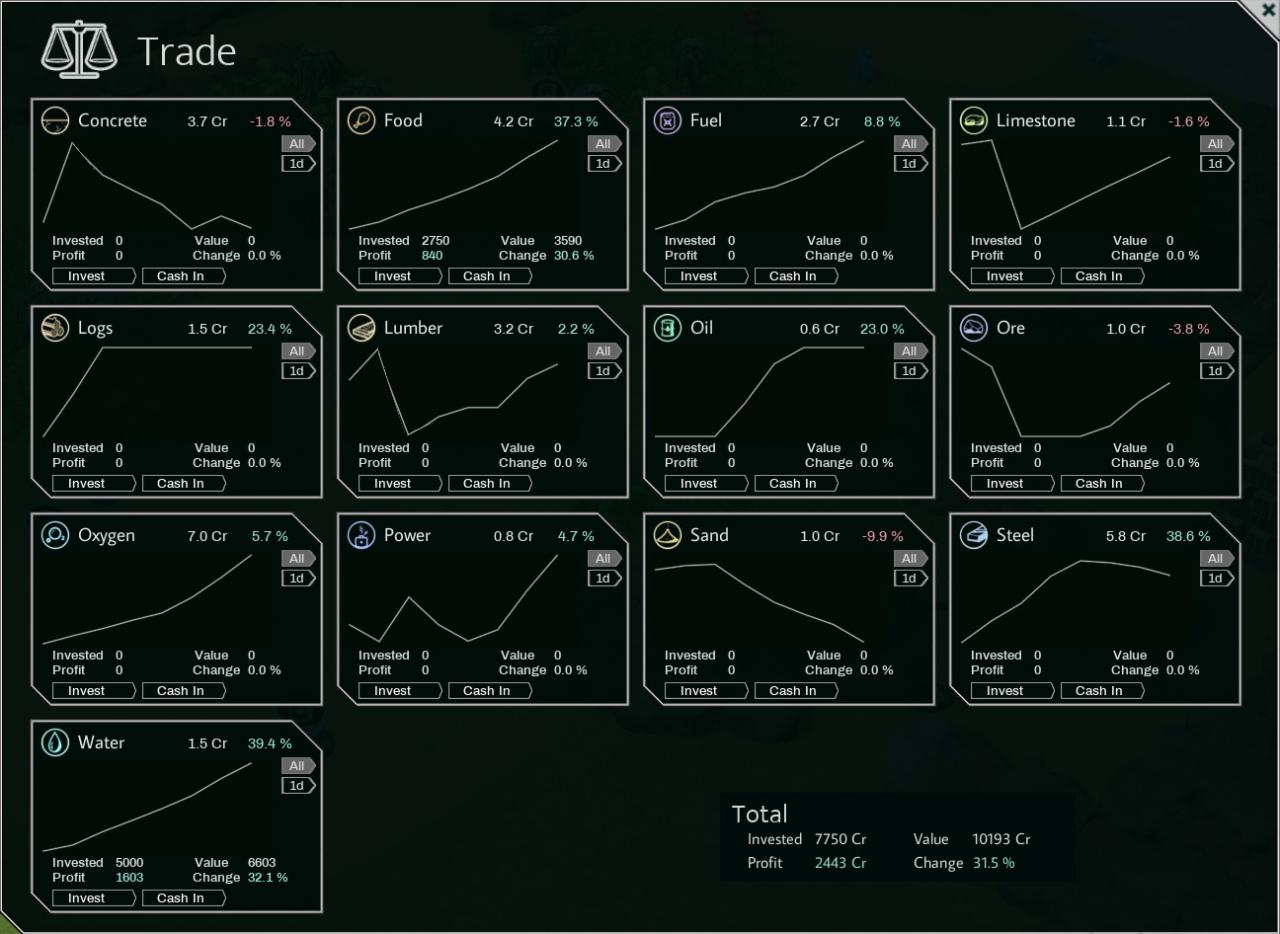 1. Click the Invest button of the commodity you choose to invest in:

2. Move the slider to set the investment amount:

4. The Investment is done and you can now follow the value development. 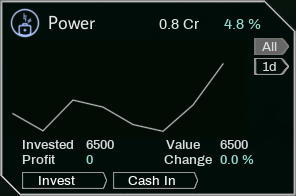 To Cash In an Investment

2. Move the slider to set the cash in amount:

4. The Cash In is done and the remaining investment (if any) is shown. 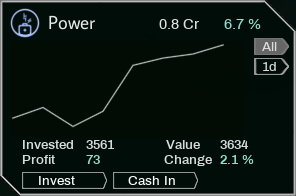 12. Relations
As you explore the planet you will at some point bump into the rival colonies. You can to some extent live as neighbors and make deals that can be beneficial. However, they have come to the planet for their own purposes and will have a strict vision of how you should behave. This may lead to conflicts of interest and even to a war.

On the panel you can see all the established connections (in the beginning of the game there are no connections between the colonies) and the relation status. 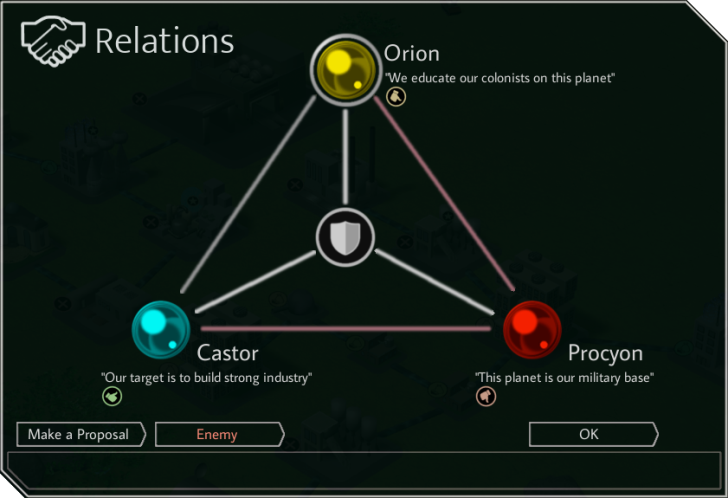 The thumb symbol tells how acceptable you are from the rival colony’s point of view. If the thumb symbol is green and pointing upwards, your relationship is good. The more red it is and the more it points downwards, the closer you are to war.

To Propose a Deal

First select the target colony by pressing the colony symbol. The silver-colored selector circle is now moved around the selected colony:

Click the Make a Proposal button if you would like to make a deal with the selected colony:

This will introduce their representative to you and you can then open the Deal Panel: 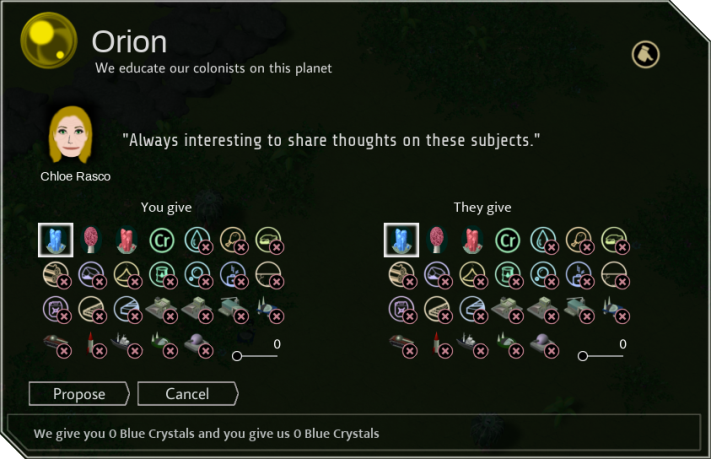 Select the target colony by pressing the colony symbol the same way as above:

State of war now exists between you and the selected colony.

You can cancel the declaration of war by pressing the Enemy button again as long as you haven’t closed the panel.

13. Controls
Scroll left
a or <left arrow>
Scroll right
d or <right arrow>
Scroll up
w or <up arrow>
Scroll down
s or <down arrow>
Zoom in
z
Zoom out
x
Pause game
<space bar>
In-game menu
<esc>
By plcolonization

My Vow to My Liege: All Endings Guide

A very simple rub guide and some lists.   Rub Guide 1. Go through the in-game tutorial. 2. Find the "weak points". They...

For players that are wondering what to do at the start of the game and how some things work. Bare bones guide.   Tips When you...

Ni no Kuni™ II: Revenant Kingdom – How to Transfer a Save File between Computers or Steam Accounts

This guide aims to show you how to manually transfer your save file between different steam accounts or computers.   1. Backing...