Re ZERO The Prophecy of the Throne: 100% Achievement Guide

How to achieve all of the achievements in Re:ZERO The Prophecy of the Throne. Contains spoilers for the game.

The following achievements can be earned through playing the story normally;

Beneath the White Sun

All Was Taken Away

Kicked Out the Uninvited Guest

Repelled at the Slums

Searching for the Parents Once More

Just the Two of Us

When going for post-game achievements, use your Cleared save from your previous playthrough. Things like CGs (Memories) are stored per-save file, so you will need to use the same save to store your progress on these. Additionally, loading from a Cleared save will let you make some choices at the start that you couldn’t before, which have achievements tied to them.

From the Beginning
Started the second loop.
Load a save file that cleared the game.

Waterside Flower Garden
Enjoyed the view of Emilia and the others in their swimsuits.
It appears for this achievement that you need to see both the swimsuit events. You can see each one by choosing “Remember that one time” after loading a Cleared save and then later choosing “I know, I’ll invite Beako too!” or “Oh, I can’t wait!”… but it seems as though you can only do this once per run of the story, meaning that you have to play through the story again just so you can choose the other option. This is because there doesn’t seem to be a way to go to a specific place in the flowchart. The two swimsuit choices are required for the memories achievement (“Fond Memories”).

This will probably end up being the last achievement you get, as you will need to start again from your second Cleared save in order to make the choice you couldn’t do last time.

You Are Supposed to Pick Her, I Suppose!
Spent time with Beatrice instead of heading to the royal capital.

Give Me Romance
Spent time with Emilia instead of heading to the royal capital.
Unlike with the swimsuit choice, you’re able to do the above two achievements in one run, as choosing one option will send you back to the start of “Strategic Tea Time”, so you can just choose the other after.

After beating the game, load your Cleared save. When you get control of Subaru during the very first time (“Strategic Tea Time”) go to see Beatrice in the West Hallway.

This will send you on a different route, where you get the options “I want to get closer to Mili” or “I should repay Beako for her kindness”.

Choose “I want to get closer to Mili” for “Give Me Romance” or “I should repay Beako for her kindness” for “You Are Supposed to Pick Her, I Suppose!”.

Fond Memories
Unlocked all Memories in the Album.
This is unlocked by gaining all the memories in the game. I’m not sure if you need to do everything on the flowchart or not. To complete the flowchart you basically need to Return By Death in each mission, but I don’t think these have any Memories tied to them. I would personally recommend doing it to be safe seeing as you will need to do 2 playthroughs anyway, but I think this achievement just requires you to have seen all the Memories/CGs. If someone knows for certain let me know!

I strongly recommend saving before starting any mission briefing, speaking to everyone, and Thinking as Subaru repeatedly until you have all the information.

The Worst Decision
Chose “No… Never mind.” during a briefing. 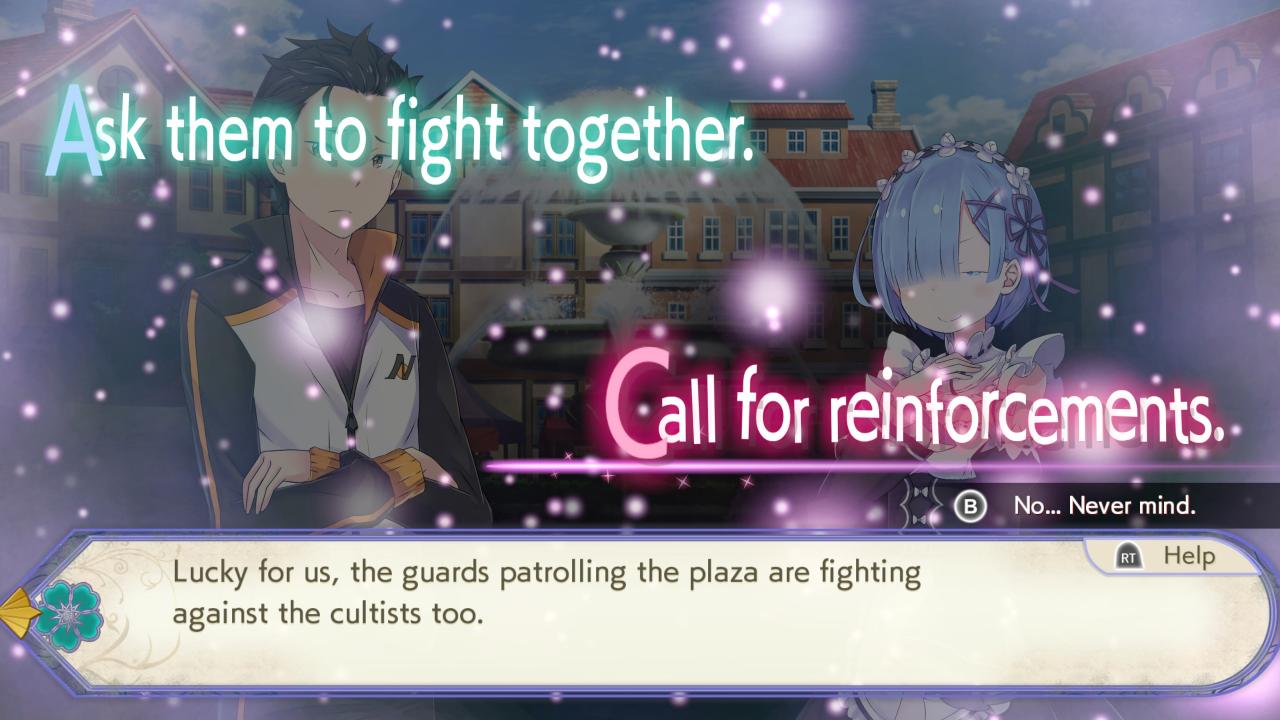 When presented with two options when planning a mission, choose “No… Never mind” instead (by pressing the back button on your keyboard or controller). 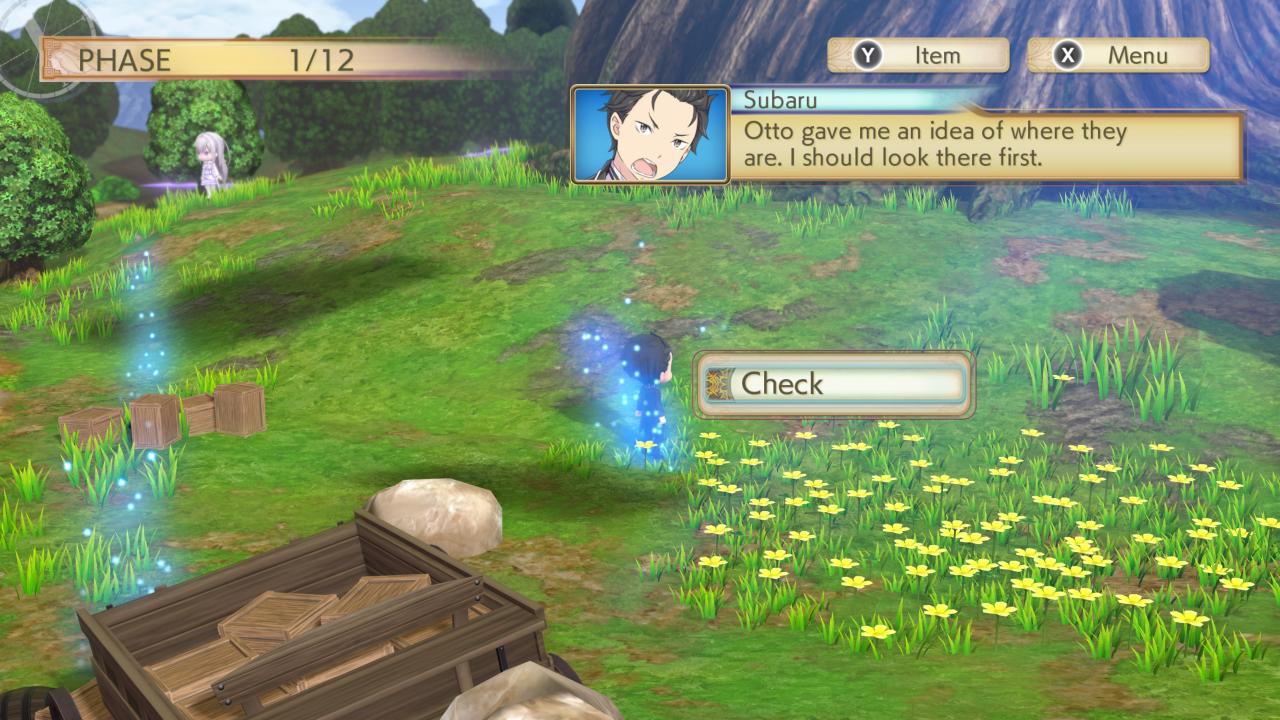 During the first mission, go to the right and Check the flowers.

A Familiar Future
Received a bag of silver from Anastasia beforehand.
This achievement is earned during the mission where you need to help Anastasia escape Wolf (“Drama in the Shopping District”). Before the mission, speak to everyone at least 3 times and make Subaru Think 3 times before speaking to Anastasia. Choose to run away from Wolf. 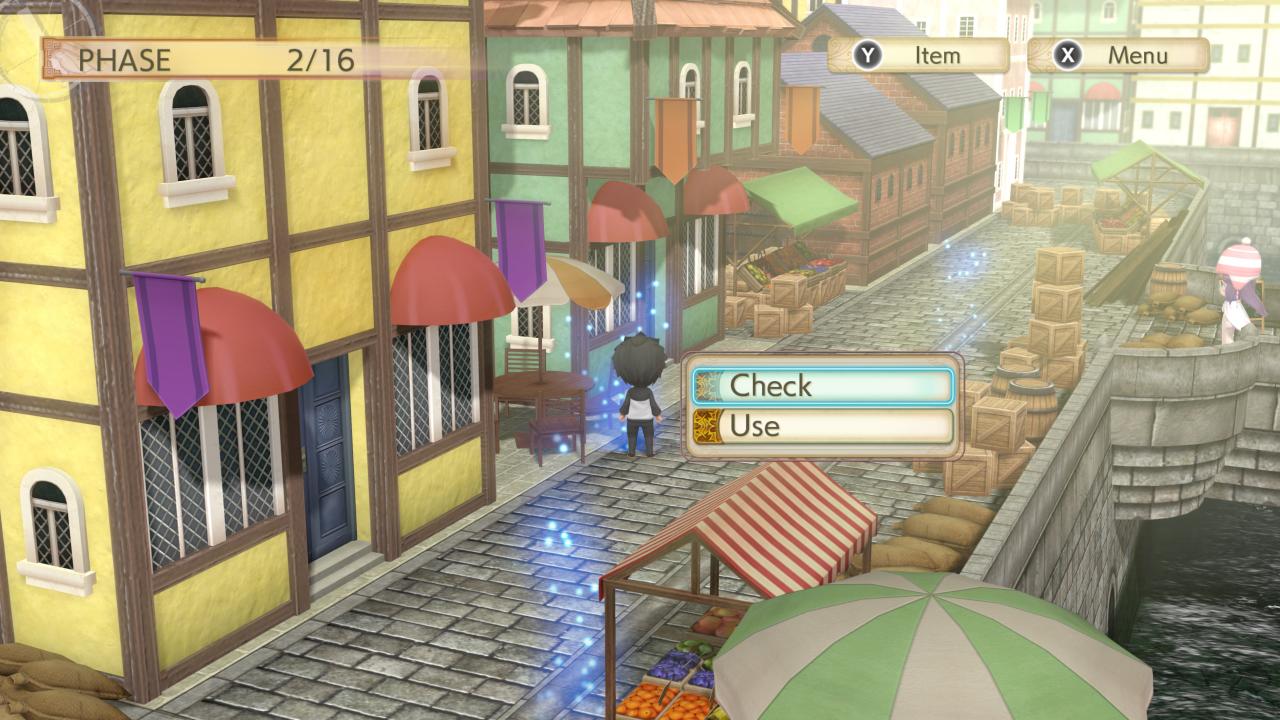 During the briefing, choose “Knock over wooden boxes and lumber”. Then choose “There may be mercenaries in the tavern”. Talk to the mercenary on the left side (by Checking the seats shown above), then talk to Anastasia to get Silver.

Now, fail the mission and Return By Death. When you next start the mission, go and speak to the mercenary again and you should get the achievement.

Still Unseen Hands
Escaped from Petelgeuse without revealing his Unseen Hands.
This achievement is earned during the mission where you need to help Rem fight the Witch’s Cult (“Panic at the Royal Capital”). Talk to everyone 3 times and make Subaru Think 3 times before speaking to Petelgeuse.

During the mission briefing, choose “Call for reinforcements”. Next, choose “Take the shortest path”. Finally, choose “Attack from the right”. 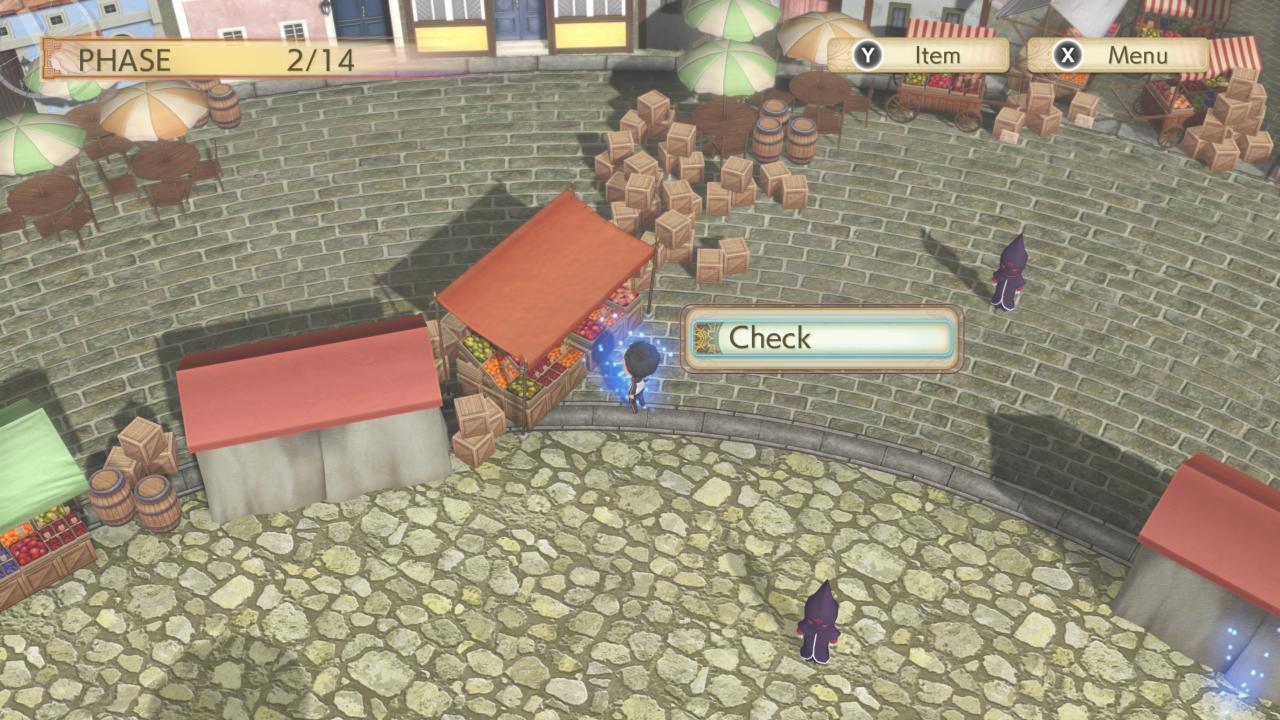 When the mission starts, check the appa stand in the north (shown above). This should give Subaru the item “Breaking through”. Waste Subaru’s turns until Phase 8 after this, when Rem should reach Petelgeuse. Use “Breaking Through” on Rem and this should allow you to clear the mission without revealing Petelgeuse’s hands.

You Are Indeed Sloth…
Ran out of time on a phase and failed a mission.
I achieved this during the mission where you need to search for Rem’s uneasy feeling in the garden. Just run out of turns.

Choose “Don’t sacrifice more than necessary”. This will allow Subaru to taunt Wolf. The other options shouldn’t affect the achievement, so choose whatever. 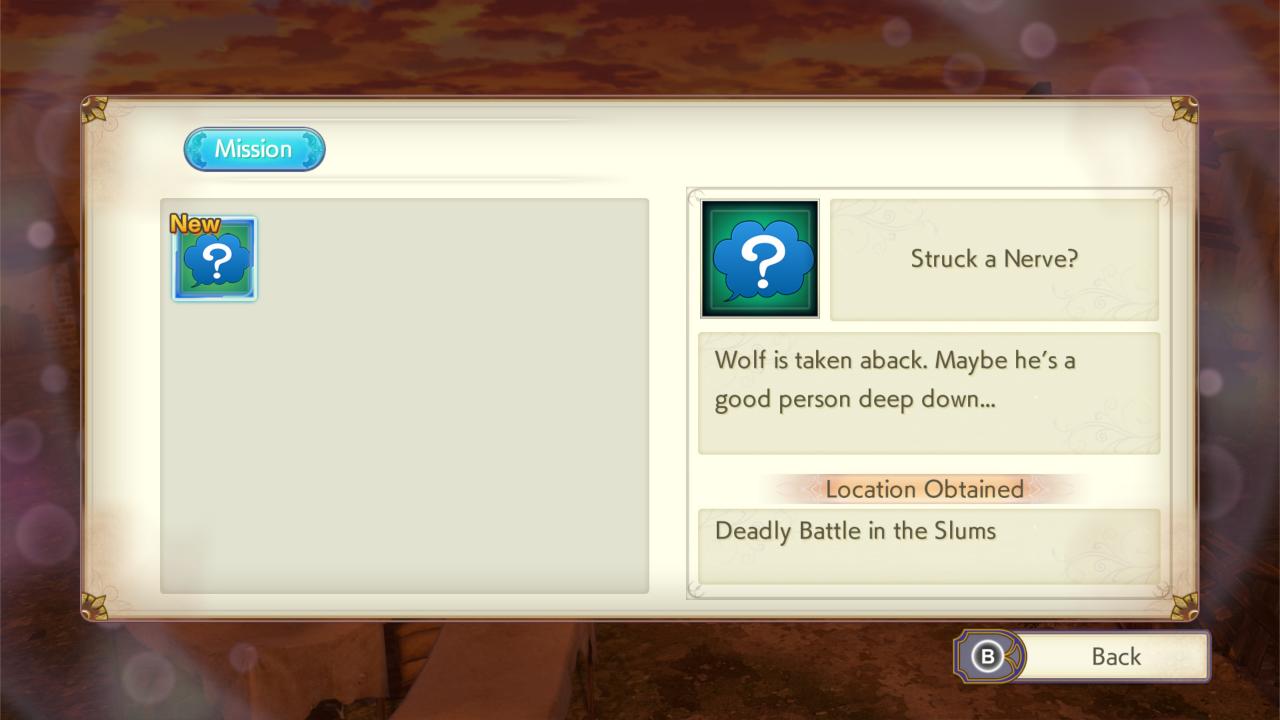 A Sweet Treat
Salum gave the girl some sweets.
This achievement is earned during the mission where Subaru, Rem and Salum try to find the lost girl’s parents (“Made a Girl Cry”). Speak to everyone but Salum and the girl 3 times and Think as Subaru 3 times to make sure you have all the information. After doing this, speak to Salum.

During the mission briefing, choose “Respect Salum’s opinion”. Then choose “Keep an eye on the girl”. 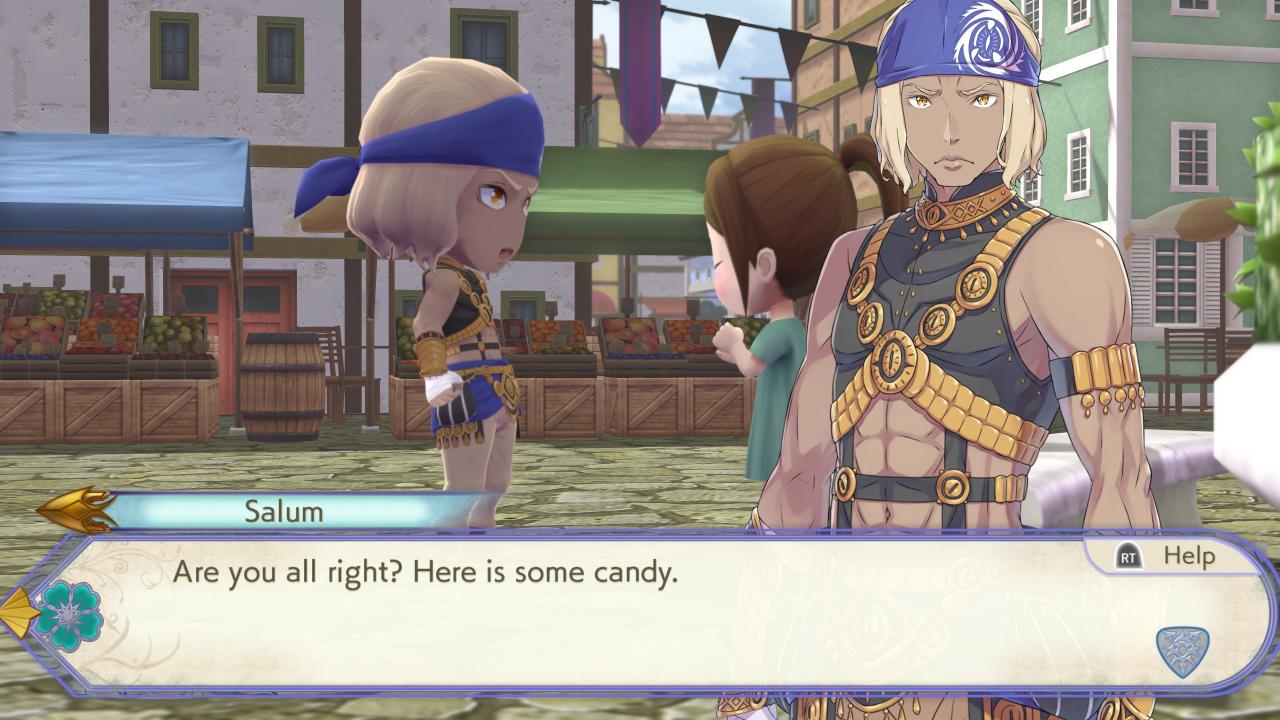 Do not speak to the girl at all during the mission, and don’t finish the mission before Phase 18. On Phase 18, Salum will give the girl some candy, which will award the achievement.

There Will Be No Next Time
Nearly got found by guards and Sakura twice.
This achievement is earned during the mission where Subaru, Rem and Felt sneak into the Church (“Infiltrating the Transcendent Dragon Church”). Speak to everyone 3 times and make Subaru Think 3 times to make sure you have all the information before choosing to go to the Church.

During the mission briefing, choose “Knock objects over”, and then choose “Sakura’s powers”. During the mission, continue with the mission as normal until you knock the boxes over. Once you have knocked the boxes over (like above), try to run into the knight twice. Thanks to the choices made in the briefing, you’re allowed two mistakes before being caught by the guards. The achievement should unlock after the second time running into the knight.

Finishing all the above achievements should award;

Thanks for reading! If I’ve made any mistakes let me know! 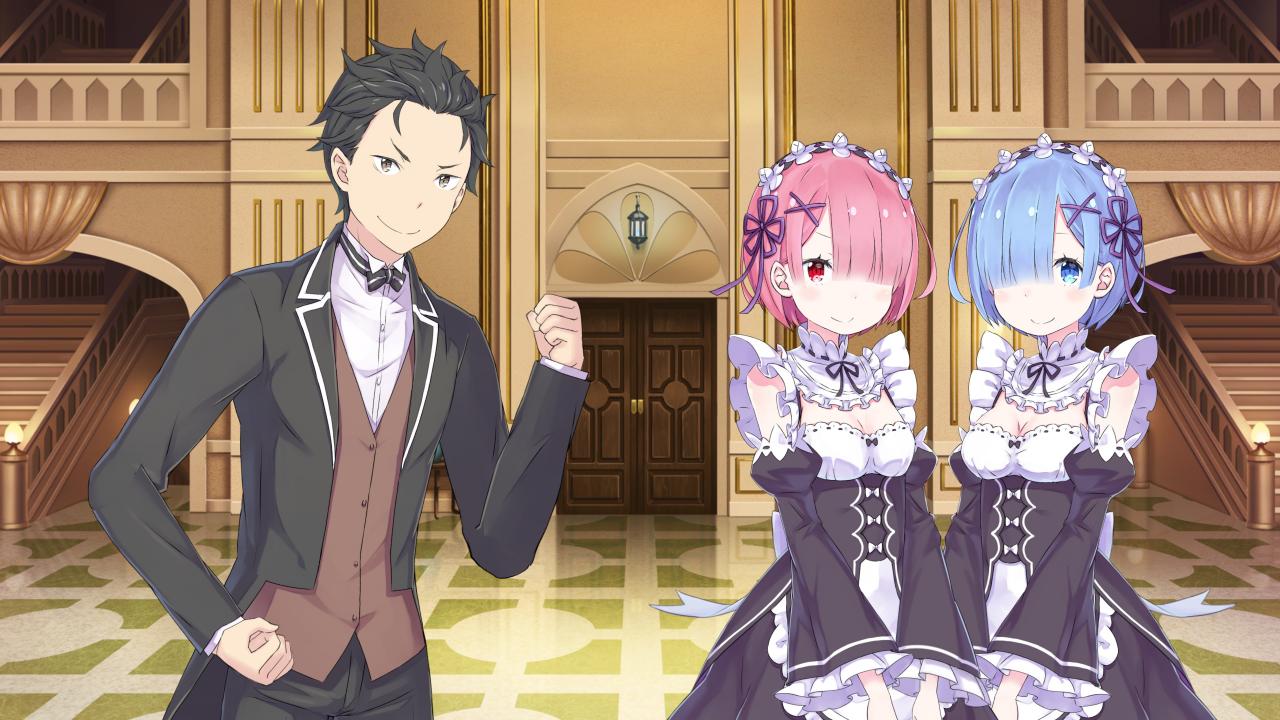 2 thoughts on “Re ZERO The Prophecy of the Throne: 100% Achievement Guide”