A quick and short guide to start of any new player clueless on what to do or where to start.

Introduction
Welcome to Rebirth Fantasy Online!
This guide will try and help you understand a little more about the game and how to start off on your journey.
If any of the keybinds set by default does not fit your liking, the Settings found at the bottom right corner of your screen by clicking on the menu tab will let you fix that.

Click any of these in the Guide Index to be directed to listed explanation.

Movement
Your movement speed is quite slow until you manage to get a pair of boots. Once you get a pair, you’ll feel like the wind.
Boots can be equipped in one of the 3 Accessory Slots on your Character Page, equipping multiple boots however will not increase movement speed stat further.

As a new beginner these are probably the boots you would want to get first as their level requirement to equip is quite low. 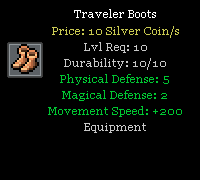 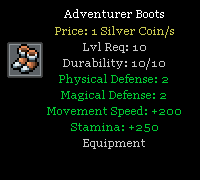 Traveller Boots drop from level 25-30 Goblin Champions. They are located at the deepest depth of Talli Village’s right side beach cave.

Adventurer Boots drop from 40-45 Trolls. They are located at the cave north east from Lifa Town.

Both boots are a rare drop, so it would be probably easier to buy them from experienced players, to get you going, there are other boots available ingame too, but they require an even higher level and are more difficult to obtain.

Equipment
Equipment comes in many shapes and forms, as it be drops, quests, chests or crafted.
You have a total of 8 Equipment Slots.

Each equipment piece generally has a strength and weakness and are categorized in three types.
Light, Medium, Heavy 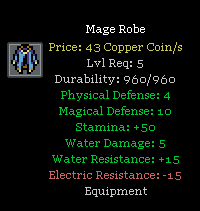 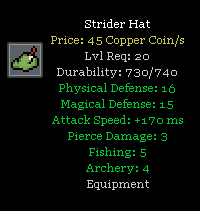 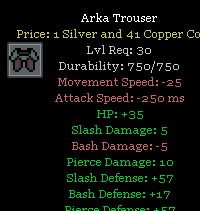 Depending on your playstyle and what skills you use in combat, you can mix between them all for a unique way of slaying your foes, or carefully calculate which pieces of equipment you need to cheese your way through.
Is a monster strong in Fire Magic? use Fire Resistant Equipment!

Weapons of course have different uses too, they will be the main factor of your damage and there are many types to choose from.
Swords, Greatswords, Daggers, Spears, Bows, Staves, Axes, Crossbows and probably more to come! Each weapon type excel in certain stats better than others.
Are you a piercing kind? use daggers, spears or maybe even a bow!
Light magic? try finding a staff that powers up light magic! 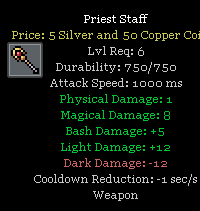 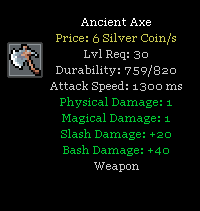 You can get rings, necklaces, costumes and much more too.

Combat and Stats
So you’ve found your first monster, most likely those pesky Cave Rats…
Use skills of various stat types to bring your foe to its end, before they do you in!

Both you and the Monsters use skills created with various cores that give them special effects, raise their damage, and change their element. So, learn the monster’s attack pattern and you can potentially avoid certain attacks. A key feature when a monster is attacking is that it starts to shake. Simple stuff.

Here you can see the stats of a Lizardman.
From the looks of it, he seems to be using slash damage skills, so in order to counter him you might want Slash Defense equipment, though with enough defense it wouldn’t matter. He’s kind of weak.

You can also see that he is generally weak to anything, but Bash Damage. Other monsters are more critical when it comes to their stats, but it explains what I’m trying to say here.

Through fighting, gathering or crafting you can gain Stat XP to level up your stats in their respective pools.
Each time you hit an enemy you will gain some Stat XP for the type of stat you attacked with when hit by an enemy you will gain resistance or defenses according to what the enemy hit you with.
Gather a plant, crafted an item? Stat XP!

…unless you have blocked XP gain by pressing the ø sign then that stat will be locked and unable to gain Stat XP.

Increasing your stats is quite important if you want to come far.

Skills
The most important part to have in order to fare well in combat, inspect enemies, turn invisible and much more!
Skills are a very fun part of this game as it has a rather unique “Core System” which lets you build your skills however you like.
This might probably be the most confusing part of the game and might be why you came to this guide in the first place.

As you start of in the ruins you’ve been given Slash, Pierce, Bash, Fire, Wind, Refresh skill books, each being a basic attack which does damage in their respective stats and pools.
Upon closer inspection they seem a little bit too basic perhaps. 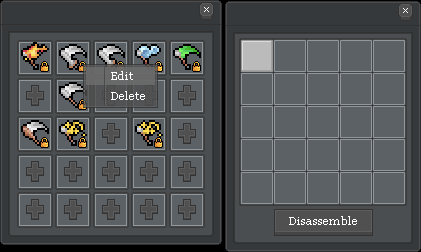 A single Slash Main Core, nothing else.
These Main Cores can be improved with other cores known as Target Cores, Repeater Cores, Power Cores and Effect Cores, each doing their respective thing.

Range Core is a must have if you want to hit something accurately or at a distance, since just hitting a single tile infront of you is quite the painful ordeal, though some weapons do increase the range of your skills regardless, but is also enhanced with a range core.

Do keep in mind that more cores in a single skill would increase it’s cost and cooldown, and not all cores combine with eachother.
Ex: Burn Effect only works with Fire Damage Main Core.

Another way to get examples of how to build your skills is the Guild Skill Book Shop.
If you’re going to play as a Magician, I highly recommend buying the Fire Ball in order to get the “Range Core: Target 6 Distance” 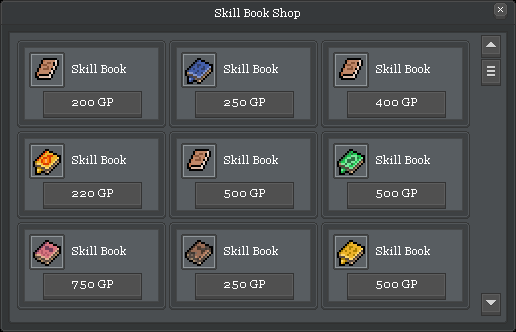 Here you can buy skill books and gain various new skills and cores to mess around with for the cost of Guild Points earned by doing Guild Missions given by the guild every 20minutes.

Once you’ve mastered the arts of the Core System, your skills might end up looking like this. 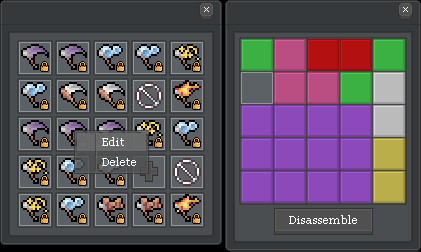 Gathering
Ahh, gathering of resources. You can cut logs to gain Woodcutting Stat XP, mine ores for some delicious Mining Stat XP, cut some grass or dig sand for Searching Stat XP and of course tossing your rod out in the sea to earn some Fishing Stat XP.

Cut trees with an axe, gain logs, golden logs, sticks and various tree goodies and as you level up you will slowly start to notice the amount is increased by a small margin too. 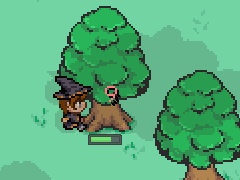 Mine ores with a pickaxe, gain lots of valuable ores, copper, silver, gold, platinum used to craft more than just equipment, the go to stat to level up if you want to be self sufficient and craft your own tools to gather more and more.
Most likely the most useful profession out of all the gathering stats. 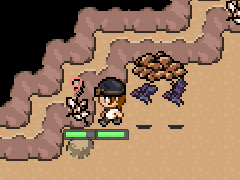 Cut grass with a Sickle and gain herbs used for potion making, a little boring but neccesary! 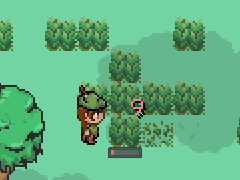 Dig sand with a shovel for smelting some glass bottles, well.. kinda boring, but the shovel can also be used to dig up treasure! Who knows what you might find! 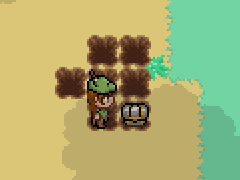 Crafting
There are currently two Crafting Professions, Forging and Alchemy.

Forging lets you smelt ores into ingots, craft heavy and medium type equipment, tools, shields, weapons and so forth. 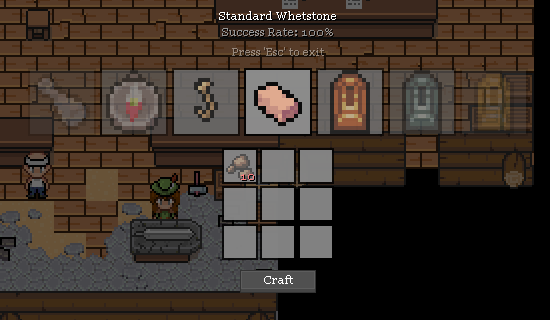 Alchemy lets you craft Staves, bows, light and medium type equipment, potions, traps and so forth. 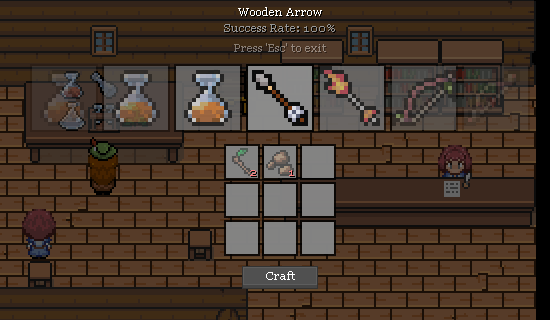 Both quite essential in my opinion.
You gain more % craft rate each time you stat up in said stat. You will still gain Stat XP when failing a craft, but it will be less than when succeeding.

An almost complete list of skits broken up into segments of thirteen, for ease of comparison against the Reminisce menu. Note: This list...

Here is a simple list of what maps to find the dog tags and armor paint schemes on in Encased.   Dog Tags Anomalous Grotto:...

This map displays the tunnels, caves, and networks thereof for the Ancestral Plains map for Beasts Of Bermuda. Perhaps not the prettiest...

Eastward: How to Fix Game Won’t Launch, Framerate, Blurry and Other Issues

Eastward is a beautifully detailed and charming adventure game developed by Pixpil. it is available now via Steam and Switch. however....

Destiny 2: The Best Loadout For Every Legendary Lost Sector

Here's the best loadout I found for the Season of the Lost legend lost sectors if: You're lower power level or You don't have many armor...