A consistent method to clear level 160 skipping the hardest jump. I used a controller.

Briefing
If you’ve made it this far you still have one last challenge ahead of you. This is a walkthrough of the final level of the game and it’s meant to allow you to clear it in a reasonable amount of time. There will be a video demonstration and a picture highlighting each section of the level. 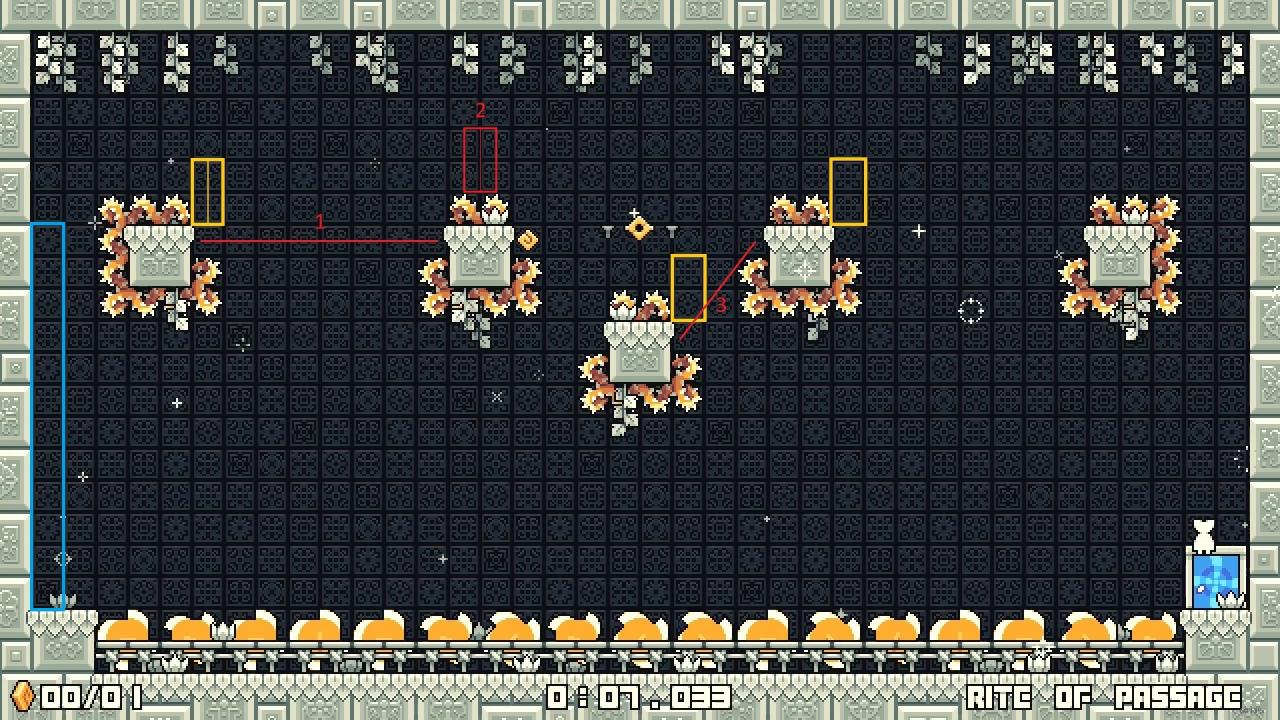 Beginning (Blue indicator)
Something that’ll save you time in the long run is holding left when you die. So you respawn, head left and wait until you touch the wall before you start climbing.

3 quick jumps (the first one sliding up until you reach the peak of the jump) will get you to the height you need to clear the first jump on the spikes section. As seen in the video the timing is pretty much jump as soon as you touch the wall. When you get the hang of it this works very consistently and speeds things up as this section is essentially free.

Something to note is that once you enter the spikes section of level, you can complete the entire thing without ever letting go of right or left, the movement keys I mean. The only exceptions to that are the first and second red indicators.

Golden Indicators
You approach these from full jumps and full momentum. When you line yourself up with the background you just hold left. Time it correctly and you’ll make it. I try to time it when I’m at the center of the tile as shown in the first gold indicator. From my experience you have turn to the left later than you’d think.

Once you land on the wall you immediately press jump and the right key/arrow. It’s a matter of getting the timing down, as if you slide down the wall you’ll hit the spikes. All these jumps are the same and require the same inputs from you, so if you can get the hang of one you’ll be able to do them all.

Red Indicators
1 (First large gap) If you just hold right the whole time you’ll hit the spikes above the stone block, I think this is because of the height coming from the last jump. While jumping to the right you want to quickly let go of right and immediately press it again. I do it around the second half of the gap.

2 (Coin skip) As in the previous jump you have release the right key for a brief moment or you’ll go past the optional coin. Time it correctly, as if you do it too late will miss the coin, doing it too early will hit the spikes.

3 (Short gap) There’s no time to react on this short jump. You have to press jump twice in quick succession, one for the left wall one for the right. The timing might faster than you’d think at first.

The last large gap after the 3rd gold indicator doesn’t require you to ever let go of right. You can just full jump safely. One thing to note is every jump in the video is a full jump, holding the jump button the entire time except for when I have to press jump again.

Having trouble falling for the glasses wearing girl of your dreams? Well, this guide is for you.   General Overview This game...

Yorkshire Gubbins is a comedic point and click adventure game. In this guide we will walk you through the game earning every achievement...

Screenshot guide with written explanations about collectibles and achievements + ~80mins walkthrough with all collectibles...

Here is the co-op campaign walkthrough for Secret of Harrow Manor game.   Manor This is the first area of the game. There are...