Second Extinction™: How To Solo Kill A T-Rex

How do you go about doing this?

The easiest way I’ve found to kill a T-Rex is to use the Grenade Launcher.

THE GRENADE LAUNCHER IS ONLY AVAILABLE FOR AMIR

The reason for the Grenade Launcher will be explained below, but the main idea is to completely negate the fact you need to shoot it’s neck to deal heavy damage.

The Grenade Launcher is a tool of destruction and can easily kill a Rex with no upgrades, so long as you bring Ammo resupplies.

However you can upgrade the Grenade Launcher a few times to make it by far one of the strongest weapon in the game, which means that you wont have to take Ammo Resupplies as there are Ammunition Packs located around almost all of the T-Rex encounters.

The Impact Detonator and Hair Trigger Upgrades from the Impact tree are the bare minimum requirements for this to be super effective.This will allow the grenades to explode on impact, as well as fire as fast as you can click.

I haven’t finished upgrading my Grenade Launcher, but with the setup in the picture it’s easy as. 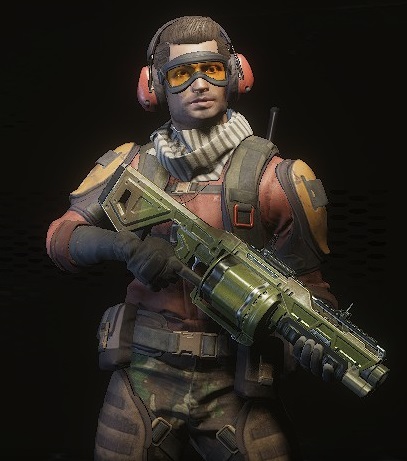 Amir has the Orbital Laser which when used on the T-Rex will deal massive damage, his scan also helps to detect the other dinosaurs in the area that may come and get in the way.

Video Demonstration Of The Strat
How to do the strat
It’s honestly as simple as dodging the T-Rex as you hammer it with Grenades and using your Orbital laser when you can.
The get out of jail free card
Just before you get knocked down, you can start healing and continue healing even while getting up off the ground.
By Matto