Siralim 3 Sigils – Names, Properties And Use

This guide will focus on what the Sigil names and properties mean and some strategies to effectively use them to farm Itherians and Special Creatures (Shop/Event/etc) for knowledge, cores and singulars.

They are the key to accessing Itherian Realms using the Teleportation Shrine and are accessible after finishing the main story. The properties of the Sigil influence the creatures and loot within that Itherian Realm. The higher the percentage bonus from the sigil properties, the better the rewards in the form of experience (both mage and creature), resources, and loot quantity. Itherian Realms are the only places players can find Itherian Creatures. Itherian Artifacts can also be found in these realms, although not exclusively since Ianne can provide Itherian Artifacts in normal realms as a talisman effect. Completing the Realm Quest in Itherian Realms opens up a portal directly underneath the player as soon as they complete the last task of that quest. This portal takes the player to the boss of the realm, which must be defeated before the player can keep their loot from the realm (no purifying fountains in Itherian Realms). Note that cores, cards, talismans, resources, and experience earned are still retained whether or not the realm boss is defeated. Also, after defeating the Itherian Boss, Umaro appears providing 3 talisman upgrades (4 with Thylacine Card).

Sigil names have two variables: random adjective before “Sigil of the” and a location descriptor afterwards.

The random adjective helps in sorting sigils and navigating to the desired sigil. It is purely random and serves no other purpose for that Itherian realm. This adjective is selected randomly from the following list:

The location descriptor corresponds to one of the 15 realm types: 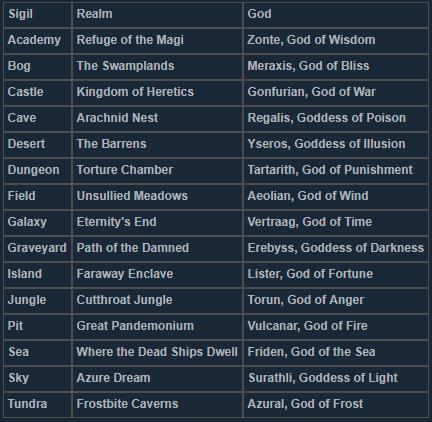 Each sigil has 1-5 properties and the icon next to the sigil changes based on the number of properties it has.

There are 3 types of properties: [P] Player, [E] Enemy, and [R] Realm Sigil Properties. Each property gives a certain amount of bonus to the overall Sigil percentage boost. These are not purely additive. The final Sigil boost from combining multiple properties will be higher than the amount obtained from simply adding them together. Nevertheless, properties with a higher base boost will also result in a larger boost to the overall Sigil percentage. There is also a Talisman, Unbroken Mirror, which increases the bonus gained from Sigils. This Talisman can be obtained from the Shady Dealer and has a maximum rank of 400, which corresponds to a 100% multiplicative increase to the Sigil bonus. The properties shown later on will have a number and percent sign at the beginning of each property. This shows the base bonus that sigil property provides. The properties are organized below based on the highest bonus that property can provide.

There are several types of mobs that you can encounter in Itherian Realms and understanding how the various sigil properties works first requires a bit of knowledge about these mobs.

Nemesis Mobs:
– Same as normal mobs, except they give 3x XP and resources as well as drop loot afterward
– Can be both Nemesis and Same Race/Mob of a Given Race at the same time.

Mobs of a Given Race:
– Contain creatures of the same race
– By default, they are normal mobs
– Extractable
– Singulars can be found
– Can be both Mob of a Given Race and Same Race/Nemesis at the same time.

28% – No Health Regen After Battle
After battles, your creatures’ health (HP) does not regenerate. Miniboss battles and Itherian boss battles regenerate creature HP still though. Also, cards that increase HP cause your creatures to regen a little bit of HP each battle still.

25% – No Mana Regen After Battle
After battles, your creatures’ mana (MP) does not regenerate. Miniboss battles and Itherian boss battles regenerate creature MP still though. Also, cards that increase MP cause your creatures to regen a little bit of MP each battle still.

12% – Stats Are Shuffled
Base stats are shuffled. Tome stats are not shuffled so more tomes will make this effect less noticeable.

10% – Can’t Have Buffs
Your creatures can’t gain buffs in battle.

8% – No (one of the classes) Creatures Allowed
Can’t enter realm with creature of that class in party. Using seeds to change creature class allows all creatures to enter these sigils.

8% – Can’t Resurrect
Your creatures cannot resurrect. This prevents all forms of resurrection.

6% – Debuff – (one of the debuffs)
You start battle with debuff. Creatures inherently immune to debuffs will not get it (Apis Protector and Lone Wolf builds). However, Regalis + Apis Protector will still have debuffs on all creatures except Apis Protector since the debuff applies before the trait applies.

20-30% – 40-60% Chance to Resurrect
Enemies have a chance to resurrect after being killed. This cannot be prevented by Hate and Other Triumphs. Some common strategies for these sigils include Final Breath and Stay Dead.

7-21% – 20-60% Chance to Resist Damage
Chance to for enemies to resist all forms of damage. When this happens, it will show 0 damage being done.

18% – Immune to Attacks/Spells
Enemies cannot be attacked or have spells of any kind cast on them. Note that you can still cast spells on your teammates and attack your teammates. This can be useful with spells like Dark Transformation and when attacking one of your creatures with Fracture.

4-12% – Reflect (20-60)% Damage
Enemies reflect a percentage of the damage as damage against the creature dealing that damage.

10% – Immune to Debuffs
Enemies are immune to debuffs.

5.5% – Copy Your Spell Gems
Enemies start battle with copies of all your spell gems. Generally good to avoid bringing spells like Sacrifice to the Light and Lycanthropy to these sigils.

2.5% – Immune to (one of the classes)
Immune to attacks and spellcasts from that class. Note that damage from other sources still counts even if the creature dealing that damage if of the class enemies are Immune to. This functions similar to the God and Boss battles with class immunity.

12.5% – Enemies Belong To Same Race
Makes 10 random mobs in realm be of the Same Race mob type (discussed above).

8% – Inhabited By (one of the races) Race
Makes 10 random mobs in realm be of Normal/Nemesis mob type with 1 mob of Same Race type and 1-2 mobs of Normal type.

1% – Contains Extra Itherians
Greatly increases chance to find Itherians in realm. This property stack multiplicatively with Pudding and Itherian Talisman allowing for 100% of the creatures in this realm to be Itherian once talisman is around rank 400.

1% – Chests Contain Extra Artifacts
Chests contain special extra artifacts. Note that these artifacts are immune to the trashcan artifact blocking effect. Also, this is the only known place in game where artifacts with more than 5 properties can spawn – as many as 8 properties on a single artifact have been reported.

Note that this means Mobs in a realm with both Same Race and Extra Dumplings or Extra Itherians will have 10 mobs that will just be Same Race with no dumplings or itherians except for the chance for them to spawn in the other 1-3 mobs in realm.

Shop and Event creatures are normally very difficult to find since they only appear in Same Race mobs, which normally only occur in 1-2 mobs in realm. And even then, those Same Race mobs are completely random, which means you might get races that don’t have any special/shop/event creatures. Here is where the Same Race + Mobs of a Given Race sigils come in. These allow 11 Same Race mobs to spawn in realm and when combined with Mobs of a Given Race allow for specific targeting of races with Shop/Event/Special creatures. While it may seem difficult to find these Sigil randomly, they are actually some of the more common Sigil properties. Using power to modify Sigils over and over, it is possible to get a decent number of Sigils with both Same Race and Mobs of a Given Race properties. Hundreds of Sigils can be farmed in normal realms with high loot drop boosts from CJ and talisman effects. Then these Sigils can be modified in bulk until Sigils with the desired effects are found, which allow for targeted farming of Shop/Event/Special creatures for their cores, knowledge, and singulars.

Siralim 3 has released on Oct 15, 2018 on steam. This guide was written by Meissner_Effect

Ive been seeing a lot of questions sofar in the discussion board that could be answered with a small guide, so as I learn how to do things...

Dyson Sphere Program: How to Boost Your FPS

Dyson Sphere Program is now available on Steam with early access. Here is a simple guide on how to increase your FPS in the game. if you...

This guide is for understanding how to play and progress through the World of Mercenaries PvE Campaign, and will go over how to beat the...

Fully accessible and discovered Map for version 0.6.0 if you're unsure that you're missing anything and would like to see what you could be...

Thronebreaker The Witcher Tales: How to Easily Defeat Gernichora