A guide to the Nyalda Marriage Maker ritual, including how to succeed and what rewards you can get.

I think of Nyalda Marriage Maker as the most finicky ritual of the game—not necessarily the hardest, but perhaps the most complicated.
Learning the Ritual

You can start the game knowing this ritual if your first god was Nyalda and when the First Clan divided your ancestors were the best magicians.

Otherwise, you can learn it through sacrifice to Nyalda. (Be patient, though, because she’s got a lot of mysteries to get through…) 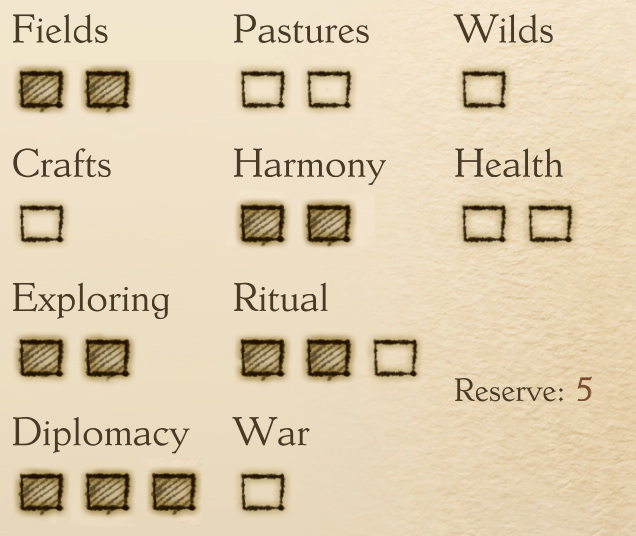 As usual, a variety of Sacred Time magic allocations can come in handy in this ritual—provided you invested at least two points in the relevant area!

Diplomacy Magic can help choices in all stages of the ritual, including all options in the final stage. It’s probably the single most valuable area for this ritual, especially if your secondary quester isn’t the best (more on that below).

Harmony and Ritual magic can come in handy in two stages each, depending on your choices.

And Exploring and Fields each help with one choice in the ritual. (The choice Fields Magic helps with is the only way to unlock my favorite reward from the ritual, that of increased grain production).

You can ask both Riders and Wheels to help with this ritual. As usual, Riders are significantly easier to convince, and Riders who agree with you about Cenala easiest of all (provided you don’t have a reputation as a rite-shirker).

If Cenala hasn’t been introduced or the schism isn’t an issue, your odds of convincing Riders will be better if your first god was Nyalda, you have one of her worshippers on the circle, and/or a circle member has the Matriarchal personality trait.

You can ask Wheels to help, but frankly, doing so is likely more trouble than it’s worth.Personally, I don’t seek help from Wheels in this ritual. Because of their sexist ways, they actively hinder “choices drawing on women’s power” (including telling Little Yelm that a wife is not a slave, or calling on Shargash’s wives for aid).

However, if those are not the choices you plan on, it’s an option. (As usual, the Wheels are put off by a Hyalor worshipper on the circle and like seeing a Relandar worshipper there, and they’re very unlikely to help if you’ve shirked helping at their own rites.)

Taking a treasure will give your odds of success a fairly minor boost, and can open up opportunities if you stray from the ritual path. Of course, you’ll also risk losing it if things go badly.

Your sacrifice (helped by Ritual magic) also influences your starting bonus. I tend to max the Goods slider, but I’m also pretty sure that’s rather excessive—you may not actually have to sacrifice more here than you would asking a god for Mysteries.

As always, it’s a bad idea to perform the same ritual twice in less than five years. Avoid doing so.

Nyalda Marriage Maker is unusual among your sacred rituals in that you must send two clan members into the Gods War rather than just one. The primary quester enacts the role of Nyalda herself, refusing her unwanted suitors. The secondary quester acts as Nyalda’s divine kinswoman, taking over marriage negotiations when a suitor Nyalda actually wants appears.
Primary Quester (Nyalda)

Primary questers for Nyalda Marriage Maker must be women who are not shamans. Beyond that, the game recommends choosing a Nyalda worshipper who is good at Bargaining and Lore, although these are not the only skills that can be useful (and indeed, a quester can get through with one but not the other).

High Bargaining can get your quester through all three stages; a combination of Bargaining and Leadership can also be useful. High Lore on its own will only get the quester through two stages, though; the same is true of Magic and Diplomacy.

High Food on its own will only take care of one stage, but it does unlock an excellent reward. So Food plus another skill can be one path through the ritual.

You must also select a secondary quester to deal with the final stage of the ritual by conducting marriage negotiations on Nyalda’s behalf. All female clan members, including shamans and tricksters, are viable options.

The secondary quester will be tested on Bargaining, Diplomacy, or Lore, depending on what you want her to negotiate for.

This choice is made during the ritual, not before. Note that you choose the goal of the negotiation for before you choose the secondary quester—you can’t back out and choose something else if, say, you decided to bargain for cows and then realize that your best bargainer is only Good at the skill. So while choosing your primary quester, also make sure you have someone else competent in one of those skills!

(Depending on which option you’re taking, worshippers of Ekarna and Osara can have advantages as secondary questers.) 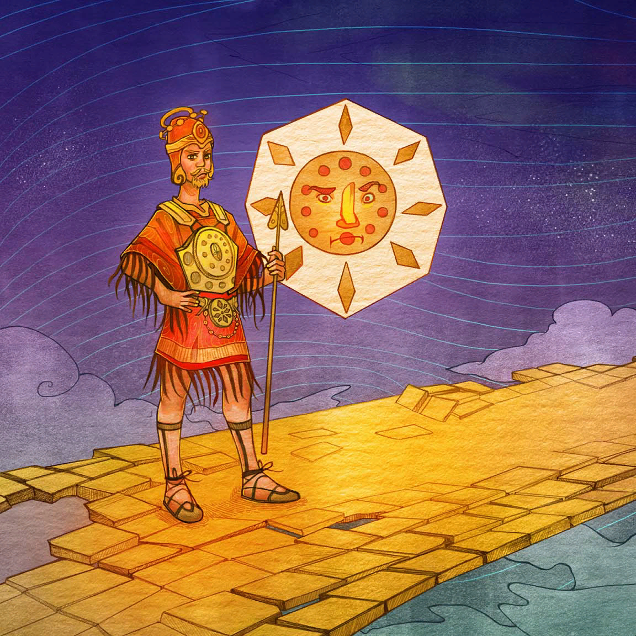 Nyalda refuses to marry Little Yelm because, as a distillation of Dara Happan patriarchy, he wishes to chain her up in his palace. (He’s also just not a very impressive sun god, by Rider standards.)

This is the stage of the ritual where failure can sometimes result in the quester getting lost in the Gods War.

How does the quester deal with Little Yelm’s marriage proposal?

“A true god of the sky would never choose life under a roof.”
“A wife is not a slave.”
Lead him to a hill where a troll will ambush him.
Let him marry an attendant disguised as Nyalda.
Offer him marriage to one of Nyalda’s attendants. 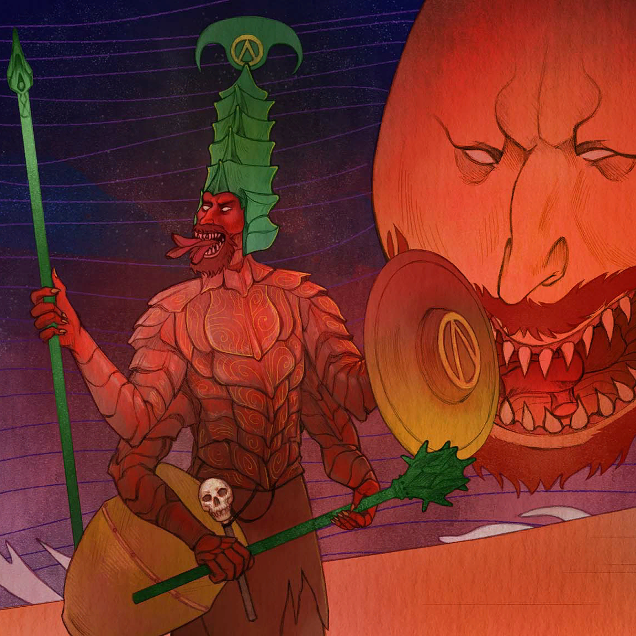 The River Wife, incidentally, seems to be the Oslira: Alkoth is located on the Oslira under the glacier.

How does the quester avoid marriage to Shargash?

Summon his Rice Wife to threaten him with hunger.
Summon his River Wife to attack him.
Let him marry an attendant dressed as Nyalda.
Offer him marriage to one of Nyalda’s attendants. 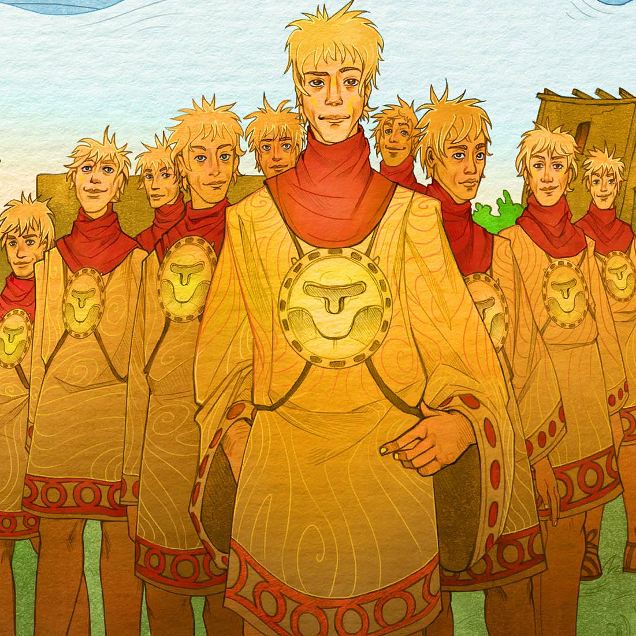 It’s not really clear what the Golden Men are—they’re portrayed as stupid creatures, not full gods and certainly not worthy of marrying even a divine attendant, and their template in the myth version of this song is a human man. On the other hand, the quester can call them solar fragments, their counterparts in Elmal’s myth are “small suns”, and they can make more of themselves from gold (the bones of solar gods).

Some random Gloranthan nerdery: I’m pretty sure the runes on their hems are all Light, not Fire—that is, the rune Yelmalio, who Riders call the Weak Sun, ended up with when the troll god Zorak Zoran stole his Fire.

In any case, they want Nyalda to marry their leader. How does the quester respond to their presumptuous offer?

Stage 4: Elmal and His Kinsmen 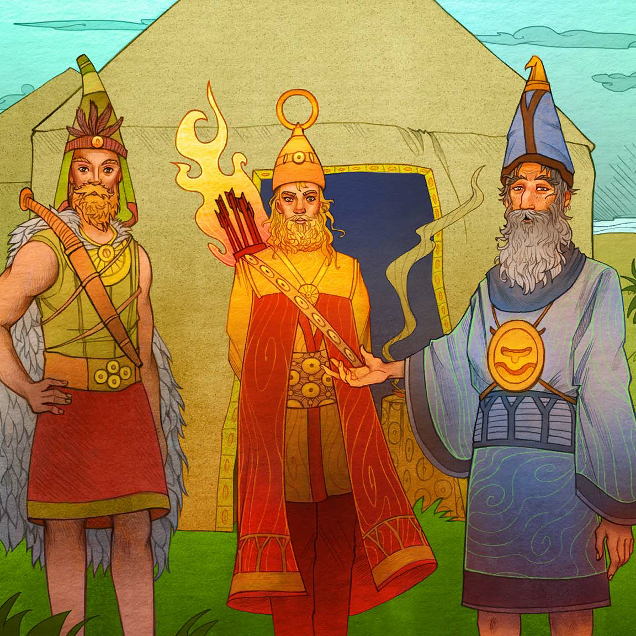 Elmal is behaving as Rider suitor should: standing back and letting his relatives (mostly his brother Relandar) do the talking. All the others were scandalously forward!

This section has a rare entirely wrong choice. It’s there as foreshadowing so you don’t make the same mistake in a situation where it will get you in real trouble.

This section is also weird for another reason: your primary quester isn’t handling it herself! Instead, she calls in a helper to represent Nyalda’s kinswomen, who will negotiate with Elmal’s kinsmen on her behalf. This secondary quester must be female, but can follow any religion, including shamanism.

Her skills, not the primary quester’s, will determine success here.

(It might be possible to choose a male secondary quester if your main one is literally the only noblewoman in the clan who is healthy/available. I have not actually been able to check this, though.)

Having found a suitor she approves of, what does the primary quester instruct her relatives to focus on in the negotiations?

Cows.
“How does he differ from her rejected suitors?”
A demonstration of Elmal’s divinity.
Proof of true love
The head of an enemy.