Six Ages Ride Like the Wind: Guide to Taming the River

In theory, Taming the River is an easy ritual. In practice it can be tricky, because unlike most other rituals, there isn’t a clear path through it based on a single skill. A successful river-tamer has to be good at more than one thing. here is a guide to the Taming the River ritual. 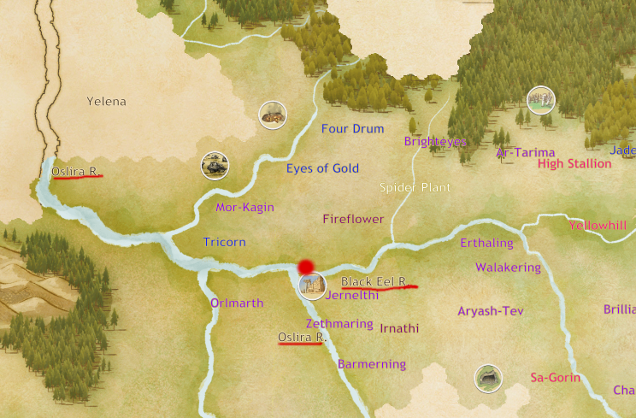 Glorantha’s rivers are powerful magical beings as well as waterways, and crossing them is unreliable and dangerous. Your expeditions may be lucky enough to cross easily, or you may be forced to sacrifice goods or magic to the river to cross—or even forced to turn back entirely, wasting a turn.

(The Trout Spirit can make crossing untamed rivers easier, but it doesn’t entirely remove the risks. Even if you have it, it’s a stopgap, not a real solution to the problem.)

There are two tameable rivers in the game. The Black Eel, the weaker of the two, flows through your valley. While all the valley’s Rider clans are on the same side of it as you are, all the Rams and some Wheels are across the river. Sending traders or emissaries—or raiders—to their lands requires you to cross it. And if you want to send explorers to the south, including the Ram kingdom of Forosan, they’ll have to cross the Black Eel as well.

The fiercer river Oslira meets the Black Eel to your west, at the ruins of Elempur (the point where the Black Eel joins the Oslira is also marked with a red dot on this map). Usually, one or two Ram clans are on the other side of this river. You also have to cross it to visit the lands to the far west, including the Spirit Hills and Autumn Mountains and the Ram kingdoms of Pentenan and Vestenan.

Other waterways, including the Oslira’s other tributary to the west, don’t cause these issues. Perhaps they’re weaker than the Black Eel, or perhaps (since you have to cross the Oslira to get to them) they’re too intimidated by your prowess to cause trouble. 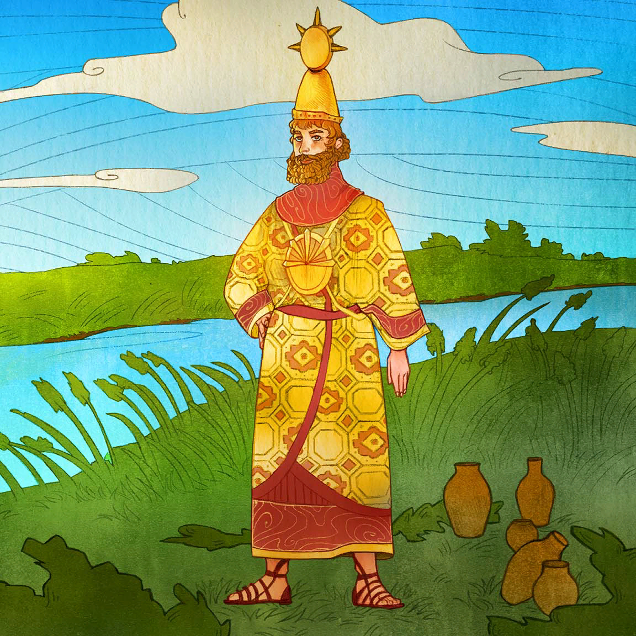 The star of this ritual is Reladivus, city god of lost Nivorah—and not one of the gods your people still actively worship. Thus, you cannot sacrifice to him for his mysteries.

You start the game knowing Taming the River if you choose the forces of Water as your clan’s ancestral enemy.

Otherwise, you can learn Reladivus’s ritual through sacrifice to his father, Elmal. Since Elmal has a lot of mysteries, it may take a while to learn this particular one from him. Be patient, and if you’re prioritizing things that require crossing those rivers, start early. 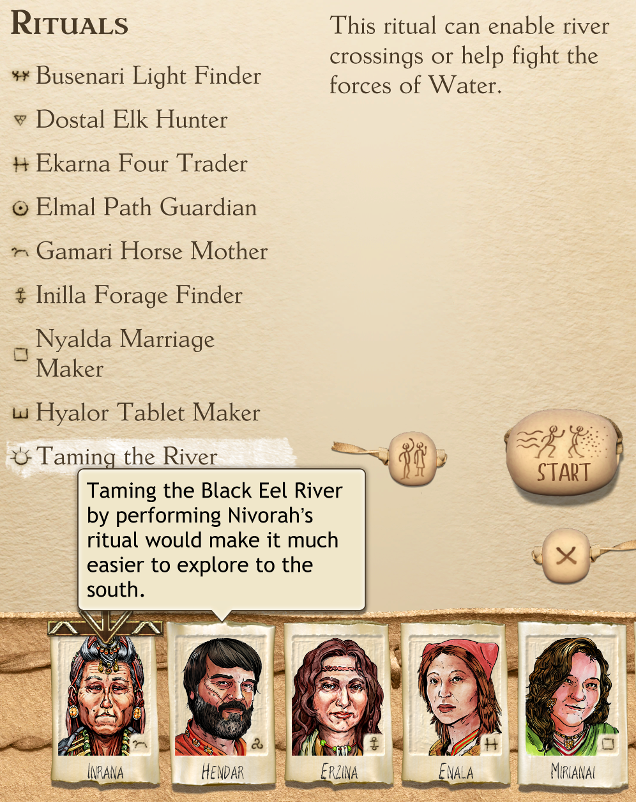 This ritual has four rewards:

The first two rewards, enabling easy crossing of the two major rivers, are the important ones. Get them before you consider the others.

While not worth passing up actual river-taming for, the 75 goods reward is significant—especially when paired with the lower sacrifice cost of using Black Eel water (more below).

I have not, personally, found protection against the forces of Water useful, but you might end up in a situation where it is. 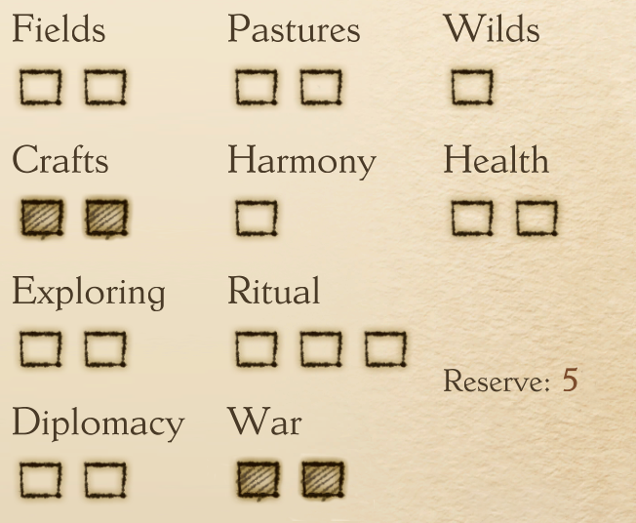 Two points in Crafts (possible only if Tepekos was the god you took from Nivorah in clan creation) will help with another option.

Make sure you leave some magic in reserve. You need positive clan magic to conduct a Gods War ritual!

(However, one point of magic is enough. You don’t need to have the three points that Taming the River costs—just be aware that you’ll end up with negative magic if you have less than that when the ritual begins.)

If you already have the clan hall built, conducting the Ceremony venture can give you a little more clan magic and help set things up for a successful ritual. However, finishing the clan hall should be prioritized over this venture.

You can ask both fellow Riders and Wheels to help; these are separate choices, and the latter is more difficult to pull off. (You can ask Wheels only if you have already decided to ask Riders.) There’s no reason not to ask Wheels to help with this ritual, though. It predates your division into different peoples, and their presence won’t hinder or complicate any options.

For this ritual, you’ll be given the choice of whether you want to prepare using Black Eel or Oslira water. This is important for two reasons. First, you can only tame the river whose water you used! Second, using the Oslira’s water makes the ritual significantly harder. Thus, you should use Oslira water only when conducting the ritual to tame the Oslira.

I usually sacrifice about 15 goods when using Black Eel water, and 35 when using Oslira. This is probably excessive—I’ve gotten away with much smaller amounts sometimes, particularly with Ritual magic in play—but I tend to be cautious in this respect.

Any non-shaman leader is eligible for this ritual.

Since you no longer worship Reladivus, there’s no one best religion for this quest—although worshippers of Relandar and Ekarna do have advantages at one option each.

The main consideration for choosing your quester should be their skills. This is the single most important factor in ritual success. The selection screen says that you want someone skilled at fighting and negotiating. This is one possible combination to get through the ritual, but honestly, not the one I’d look for first.

Finally, personality matters. This is rarely a make-or-break quester characteristic, but a quester’s personality can influence their odds of success at certain options. Do you have a noble who never shuts up about the Golden City? They’ll be strongly motivated to defend it in this ritual. And other traits can help or hinder particular options. 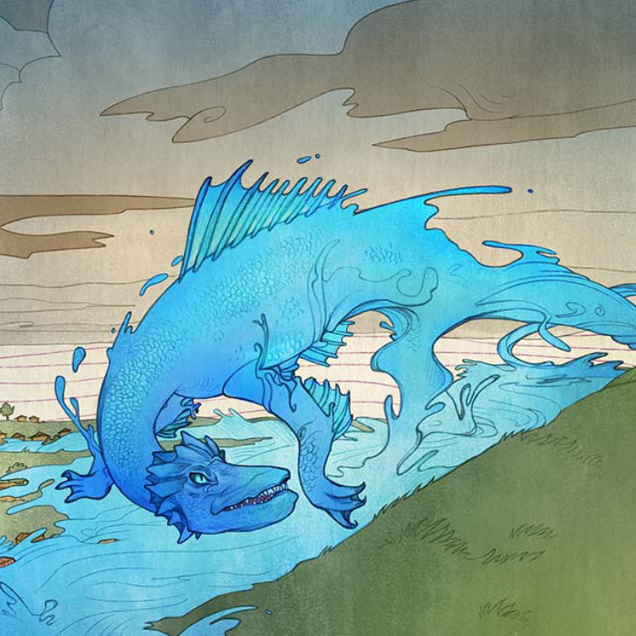 Unlike other rituals, which have multiple distinct stages, Taming the River essentially has the same stage three times—three floods, which you must deal with in three different ways.

There are five options; you can use each one only once. (In other words, you can avoid using only the two strategies you think would go worst.) A sixth option to “ride for home, abandoning the ritual” (give up) appears if the ritual has gone poorly so far.

At the beginning of each flood, your clan loses a point of magic. If you succeed, or fail after facing all three floods, this ritual costs your clan three points of magic.

Succeeding at two stages is usually enough to succeed at the ritual as a whole, though not always—two marginal successes and a bad failure can add up to a failed ritual.

People Playground: How To Get The “Faraday Malfunction” Secret Achievement

The way to get the new secret achievement.   Note: You must be on the 1.14 beta version, which you can look up a seperate guide...

A short video guide for all the blueprints that appear as optional objectives.   1-3 "Like Wolves on the Prowl" This one is...

Here is a 100% achievement guide for you to get through Sacred Stones game.   Info All achievements can be earned by...

A short guide listing the locations and story points for achievements   Story Bait and Switch: Just start the game...

161 levels of pure pain. Rolly boi will be our punching bag.   Getting Started The purpose of this guide is to show where I...