A more advanced, in depth guide to succeeding in realistic difficulty. (Not yet fully completed! In development.)

The Beginning (Character Set Up, Base Set Up, Software Set Up)
Set up your character on realistic difficulty with full support (no marketing), full HR, and 2-1-1 in System/2D/Audio. 1-1 for art. 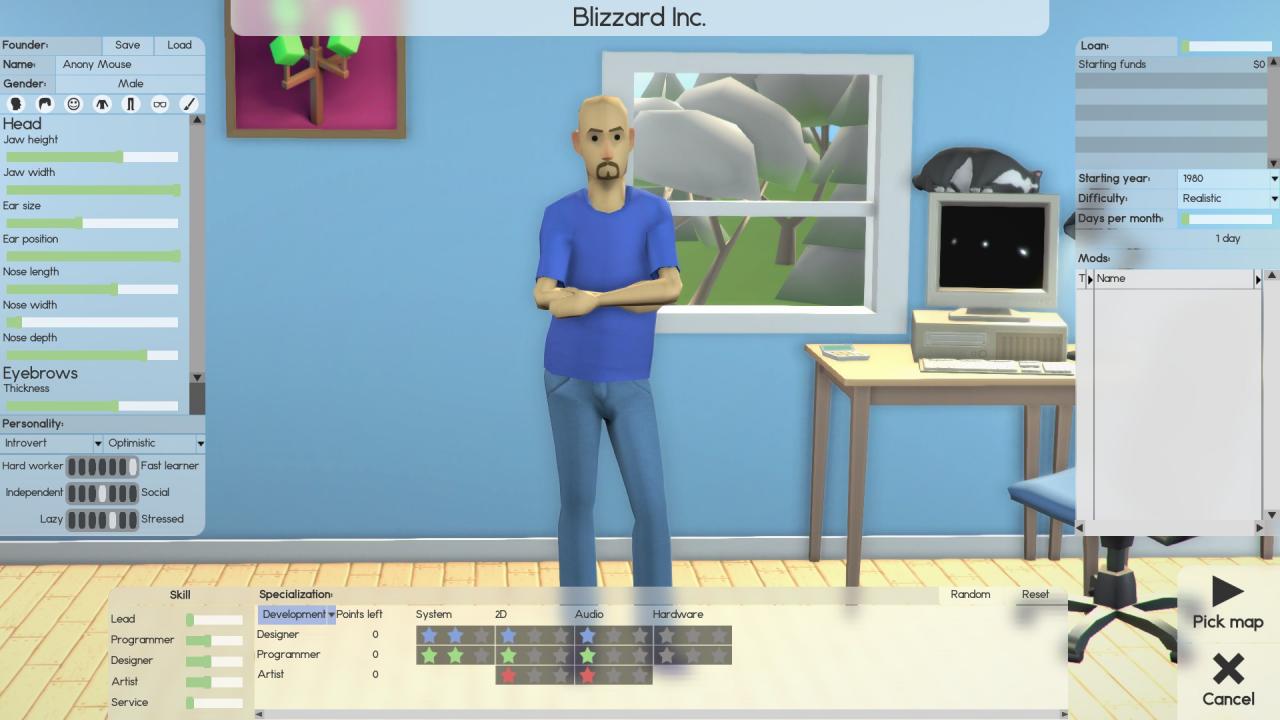 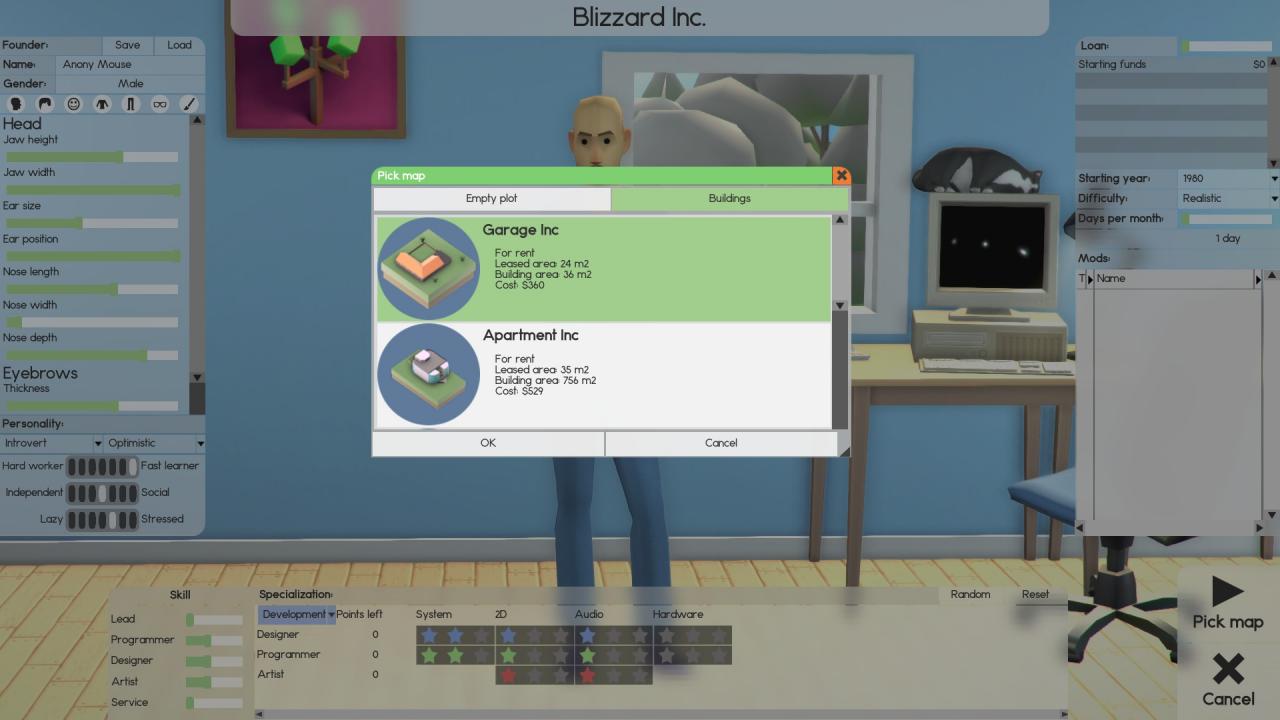 When the game starts let it run until the next day begins, then take out a 10,000 loan: 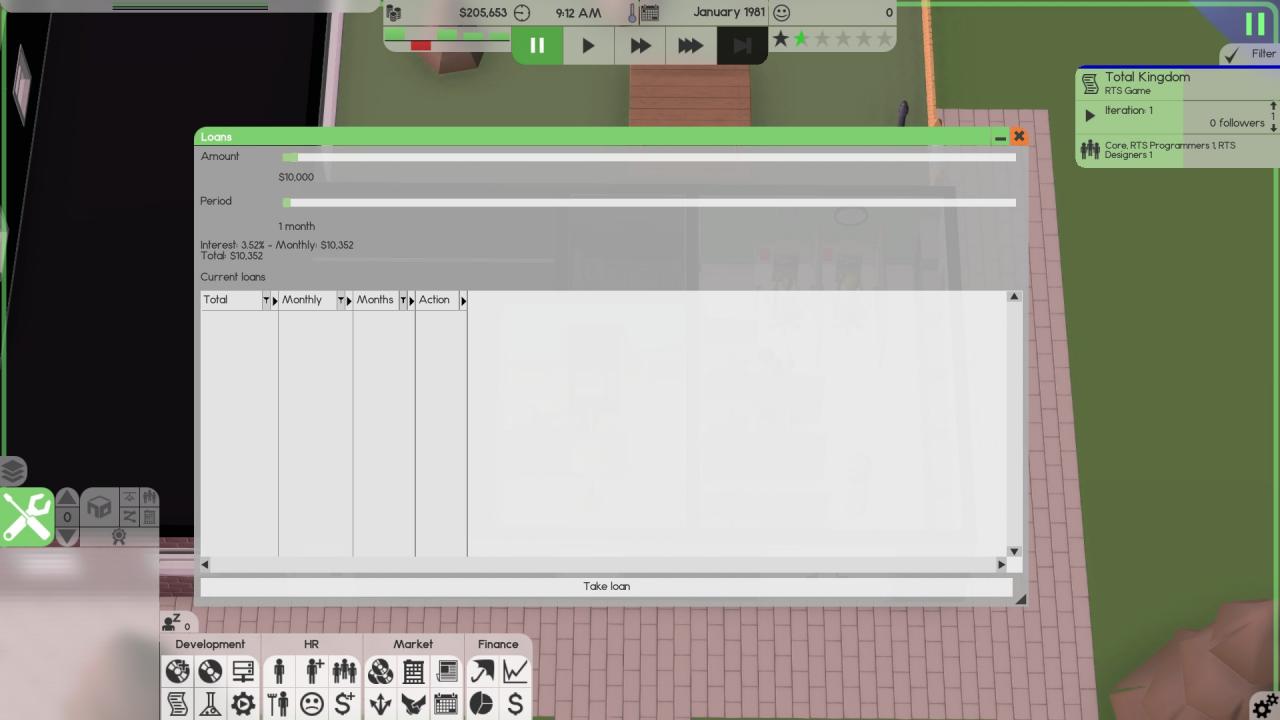 Set up a base – rent out the little room to the left, put a table and a server in there. Then in the main garage put a table, chair and computer and line the right side with bookshelves. When we hire our employees, we will sell 2 bookshelves and put a couch: 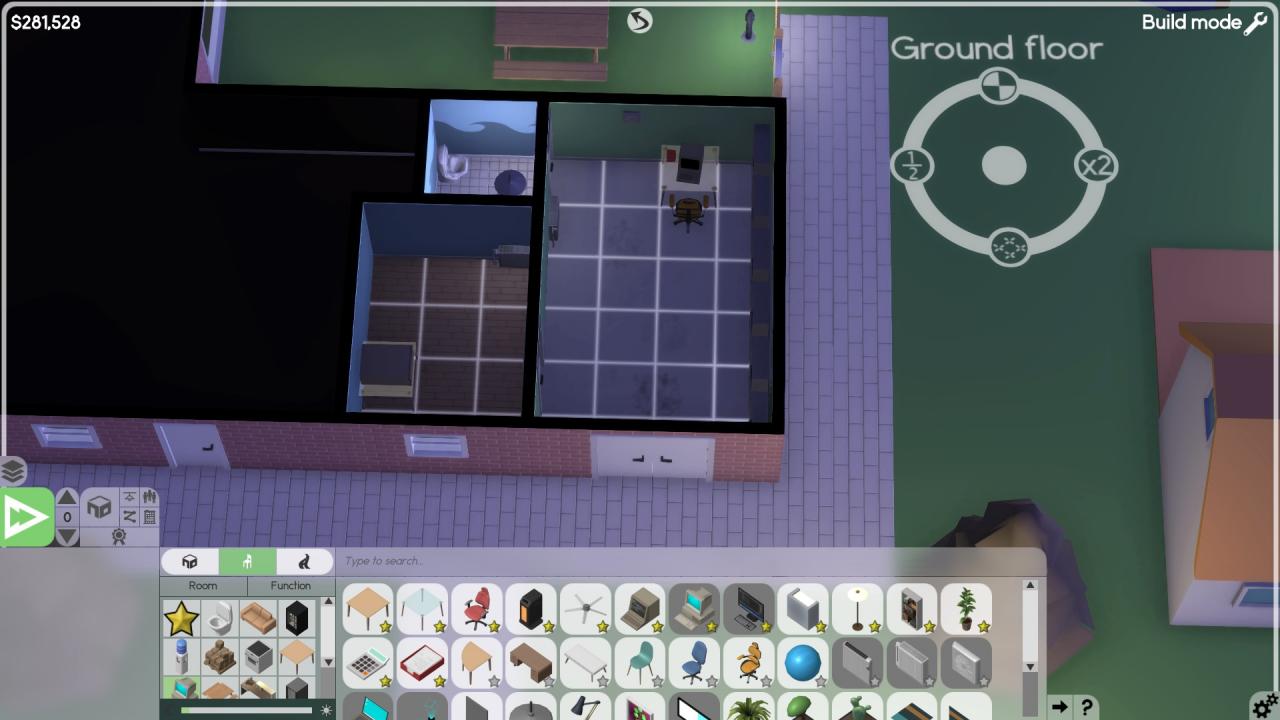 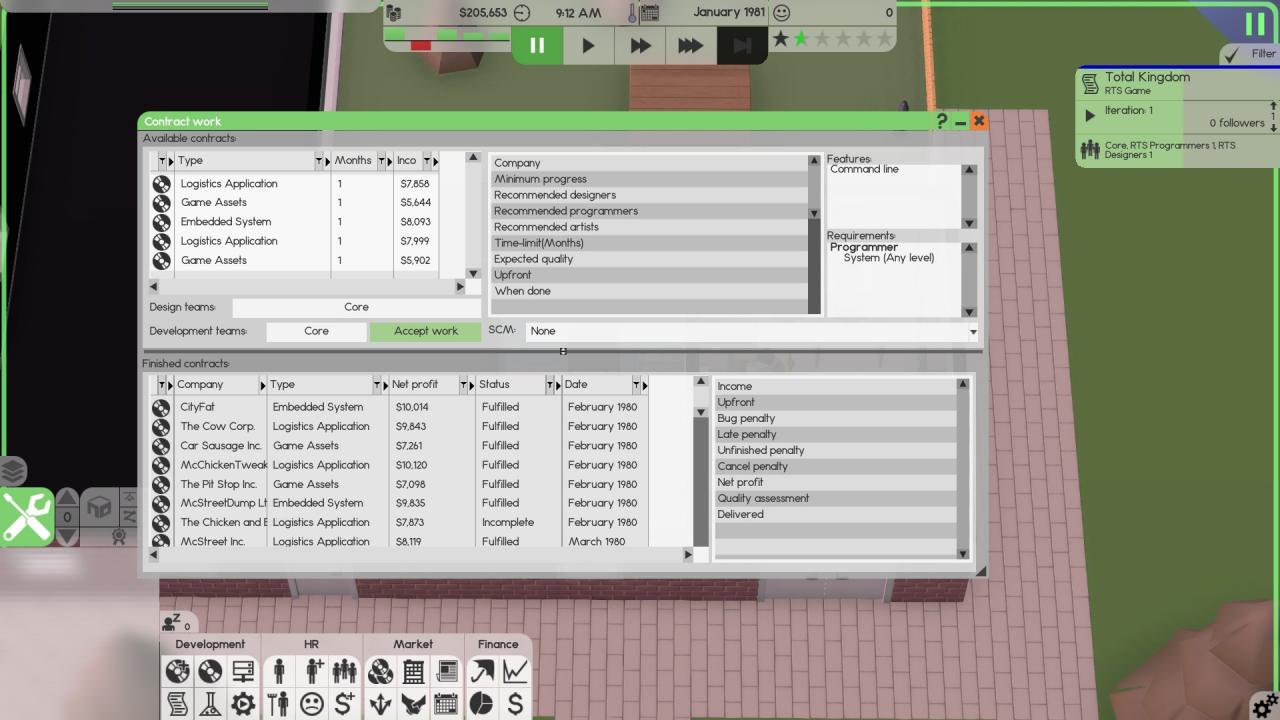 Hit Develop on all of them immediately. Don’t complete them until the next day (To slow reputation gains and stay on level 1 contracts) Usually what i do is accept the contracts at the end of the day before my ceo leaves (not after, or else he won’t start them), then complete them the next day (so I don’t waste time over working them and getting too good of rep) make sure to complete as soon as they reach the line (pause, complete) don’t do any bug fixing or development just programming/art: 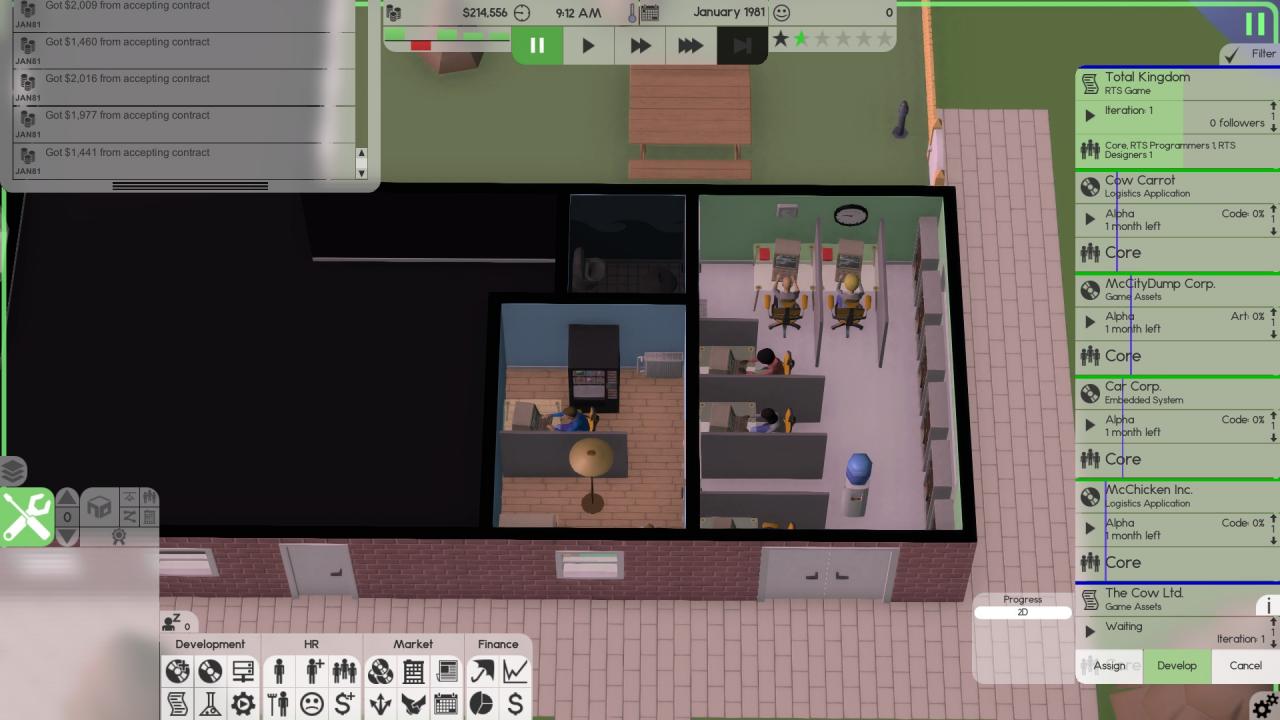 Start Development of a game (your choice):

You’re going to choose your server to support development. Choose all 1 star system, audio and 2d. On system choose mod support (2 star). Only choose the most recent version of each unique operating system (3 versions up and down get included) then set up the pyramid like so. You will use a pre-existing framework. Your core (CEO) should stay on development of this even while doing contracts at same time: 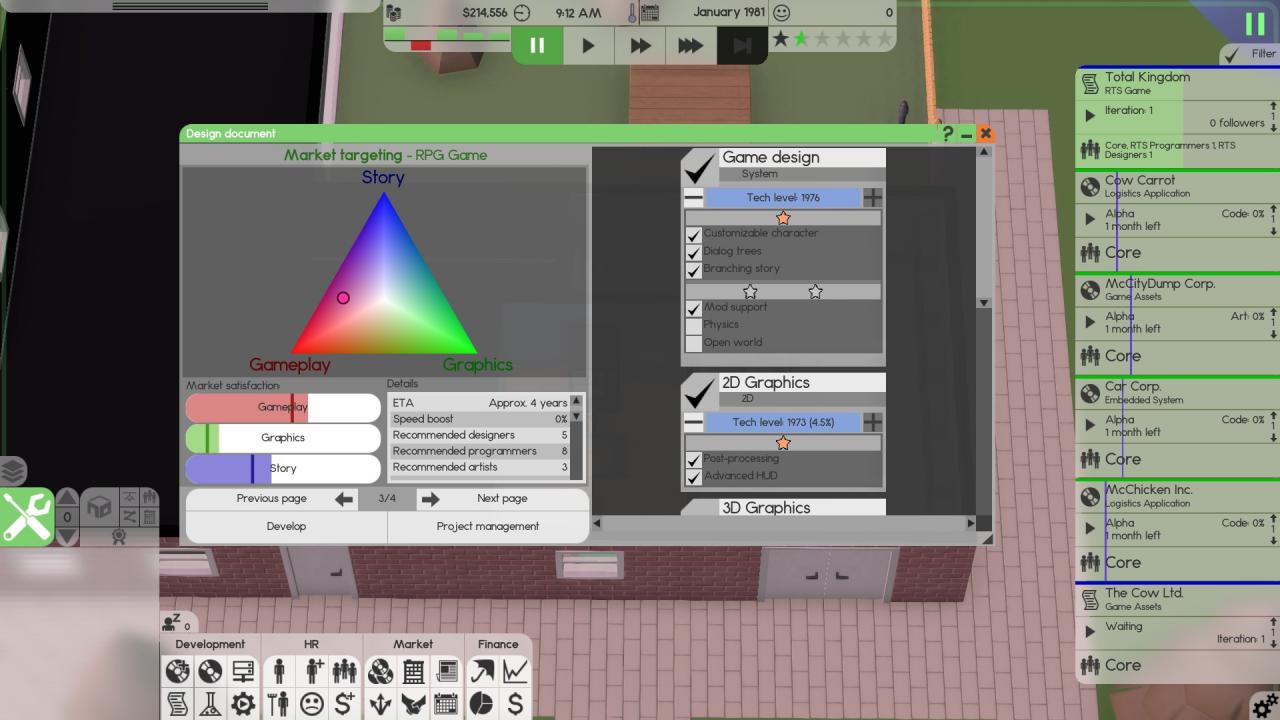 Now set up your teams (You’ll want to follow this scheme for all future teams).
You’ll note that my core team is set up for 6 pm leave time because my CEO never gets stressed but if you schedule past 6 he just falls asleep, and my other teams to 3 pm. Later on we will change the teams up for now this is our beginner set up: 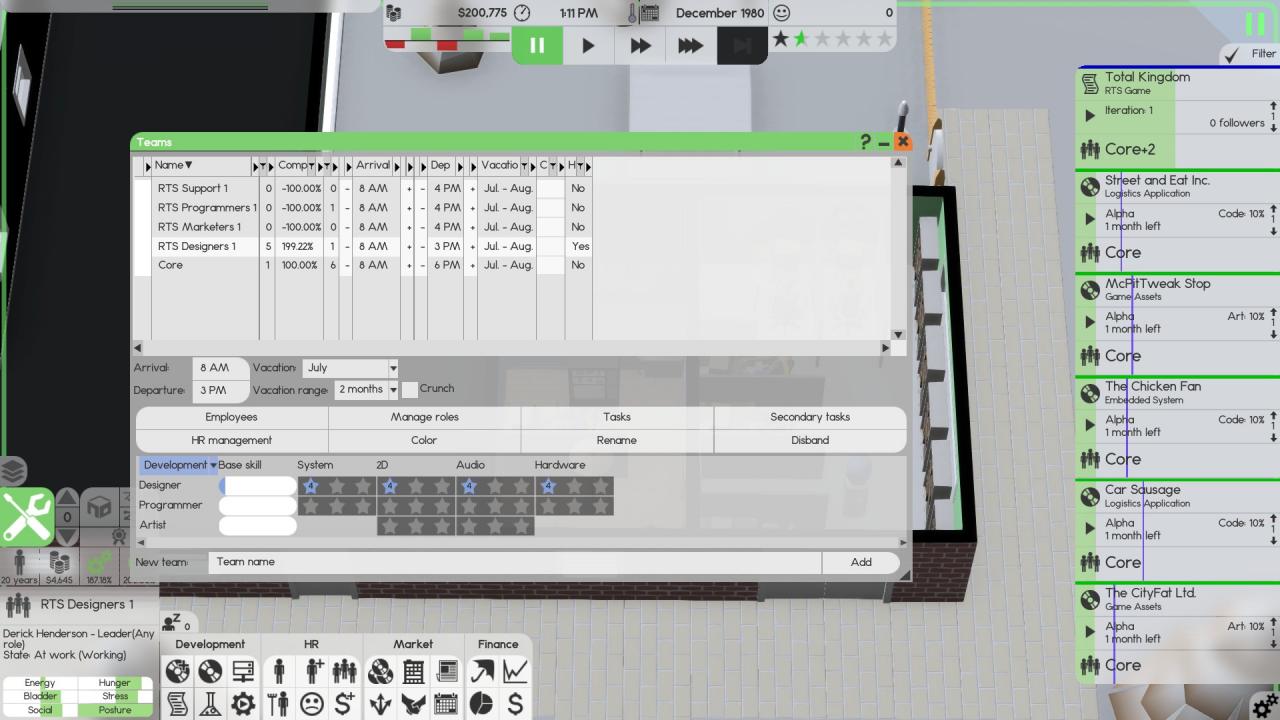 You will want to hire 1 leader (low skill level) 1 star in all HR skills. If you can get them with programming/dev skills that’s a bonus.

You will want to hire developers 1 star (low skill level) in audio/2d with the exception of 2 star in systems. 4 of them put them in the development group along with the leader. It’s going to be hard to find, but they also need to have good or better compatibility or they will cost you an arm and a leg (every time they’re unhappy they will ask for a raise). If you can’t get 2 star systems, 1 star is fine just keep in mind that they will not level up by the end of the first iteration and won’t be able to complete the iteration. You will need to have them do contracts to finish their lvl 2 systems education and you might run out of money. By the time development is done we will be firing all these employees.

Move your core (CEO) to the server room he does not get affected by the noise. Make sure to right click the small room and asign it to the core team so you don’t mix teams.

By now your set up should look like this:

First Software (Development, Support, Marketing and Printing)
Your first software should have been a video game if you followed the steps on the first section.

This first software isn’t to make it rich. It serves the core function of getting your teams skills up to be profitable in the future when your reputation is better. How do you build reputation? Support! Your support team is crucial, more than your marketing team. We will go into that much later.

For now, you’re going to iterate until the whole thing is on the 3rd iteration of development (don’t wait for gold, we can make up for it during programming phase).

You will need to have your core (CEO) do marketing for the project once you hit 3rd iteration. You will send a test build out, then begin the programming phase.

Now on to the steps…

1. Keep accepting contracts with your core (CEO only). Do the steps in section 1, start programming immediately don’t dev or bug fix. Complete as soon as the line is reached. Don’t let contracts go late if they’re not completed fully just complete them anyway.

2. by the end of the first iteration(you will stop at the end of iteration 3) you should have over 200k in the bank.

3. Once you start the programming phase fire all the developers.

4. Each time your leader levels up, level automation.

5. When hiring your programmers, you should hire for Medium skill level. You will want them to have 2 star marketing, 3 star systems and one to have 2 star 2D, another to have 2 star Audio. If you can find 1 star 2d and 2 star audio that’s fine.

Okay! So what to do now, you’ve reached the programming stage?

You’re going to set your core (CEO) to do ART ONLY! Have him complete the art for the program solo. Iterate the art once and have him do it again. While he’s doing art, have him do all the art contracts to keep you from bleeding too much money.

Once you’ve iterated the art you shouldn’t have to iterate the programming. Get it to 100% and review if it’s over 90% move on to bug fixing. Get 300 bugs fixed, and release a test build and then the next day release it and start marketing!

We aren’t doing printing yet. We are going to order our copies, order 10k. Set marketing budget to 50k. Set both ceo and programming team to handle marketing + support.

after 3-4 months you should have 300k+ in the bank. It’s time to move to our new building that we’re going to create!