A guide on what equipment to put where in the Space Crew game.

Equipment for your ship

On the placement of rifles, medical supplies, extinguishers and space suits.

Having played dozens of missions this is my recommendation on what equipment to get. This will be assuming you can afford this with the in game currency. When purchasing aim to fill out to this pattern.

= Boarders always come in the rear
= I find the rear and side gunners good to intercept boarders
= Fires start at the various electrical panels or at kinetic weapons using overdrive.
= I use the engineer to fix engines.
= Bridge crew (pilot, comms and security) seem to be best left up front.
= Gunners drop kits in hand when they enter turrets giving a crude ability to move things.
= 2 or better 3 rifles will quickly gun down enemy boarders
= At least one space suit is needed until your have 02 capable mask-helmets and a second space suit is a good backup
= Medical kits are for emergency quick healing or reviving dying. The medical station should handle minor wounds after fights.
= Multiple fires can break out at the same time.
= In the cargo bay is this oddly placed equipment station. There is an electrical panel just left of it. Its a common on fire item especially if damaged by enemy boarders. Putting an extinguisher seemed a good idea but unless you pick it up and move it by the rear gunner at mission launch you can’t get to the extinguisher without standing in the fire itself. This worked out as badly as it sounds.

So the recommendation is:

Rack 1: medical kit and phaser rifle
Aft most and in the cargo bay.
At launch rear gunner picks up the rifle and walks back to the turret to drop it outside. Alternate: fire extinguisher and phaser rifle; but you must move both at launch to drop at the rear turret.
Healing available if rear gunner needs help mid-flight.

Rack 4: medical kit and space suit
Central reactor room near engineer’s station.
Space suit for engineer to go out and fix engines. If engineer need fire extinguisher the port and starboard positions have them (racks 2 and 3).
Medical kit the engineer can take to revive a gunner.

Rack 5: medical kit and medical kit
Port side ahead of port turret.
Lots of healing.

Rack 6: fire extinguisher and space suit
Bridge rear equipment.
Allows bridge crew to act as extra fire fighters. The second space suit is the backup or alternate in case something happens to the first one.

Starting equipment when you are broke:
My recommendation is to get loaded quickly the following in this order your:
1 = first fire extinguisher
2 = first space suit
3 = first rifle
4 = 2nd rifle
5 = first medical kit

What you are doing is:
1 = stopping the inside of the ship from burning and clearing flames so you can repair things inside
2 = having oxygen O2 to go outside to fix the engines so you can fly home
3 and 4 = having the firepower to deal with boarders
5 = able to revive a crew member who is dying

Then load other items as you wish. Since an update the game is kinder on the costs to move gear around.

There is certainly room for debate on the overall count of extinguishers, space suits and rifles in favour of a few more medical kits. I played many extra low risk missions just because it was fun and don’t seem to need to medical the crew so much. 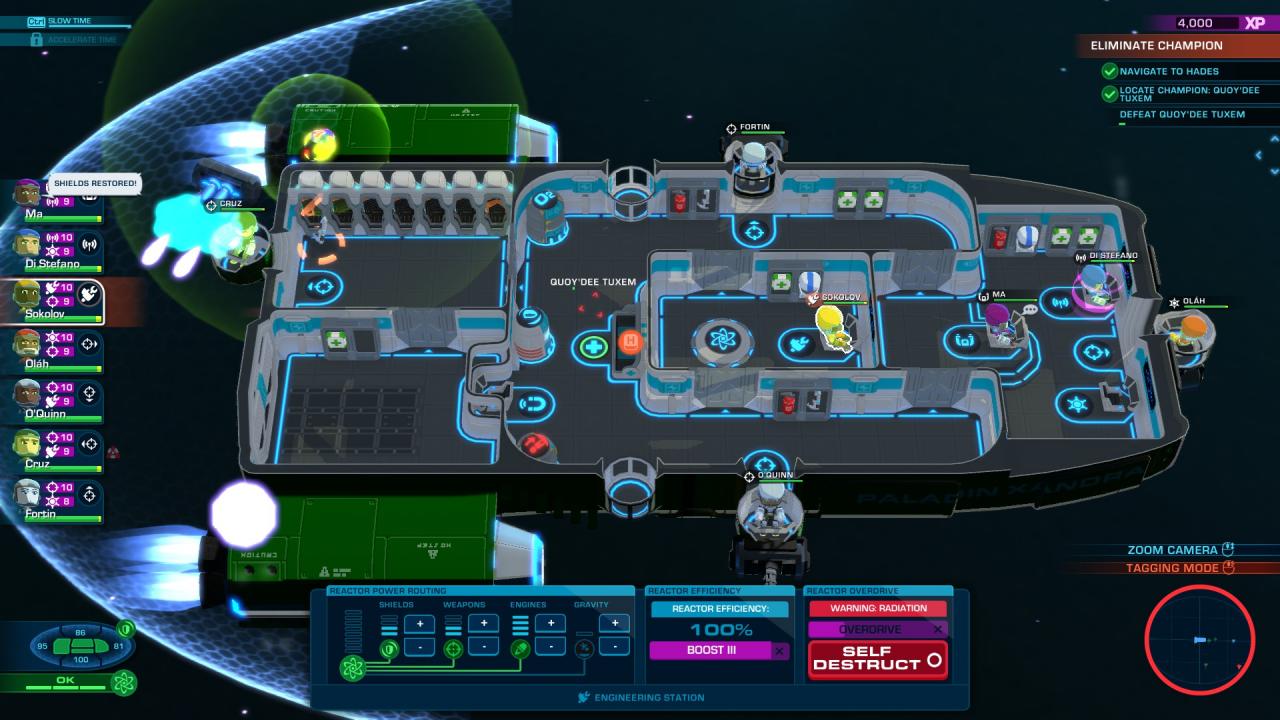 Note how by the rear turret there is a phaser rifle on the ground. This was carried over from the now empty spot in the cargo bay’s equipment rack.