This guide will show you how to use the droid hero bb8, including star cards, abilities, and general play style

Intro
BB8 is a hero that I’ve started playing a lot, he’s definitely underrated by most players and in the right hands, can kill or seriously damage any other hero, including Vader. This guide will show you how to use bb8, including the star cards I recommend for each game mode.
Confusingly Worded/Useless Cards
There’s three cards that fit into this section, two confusingly worded cards,and two useless cards cards. 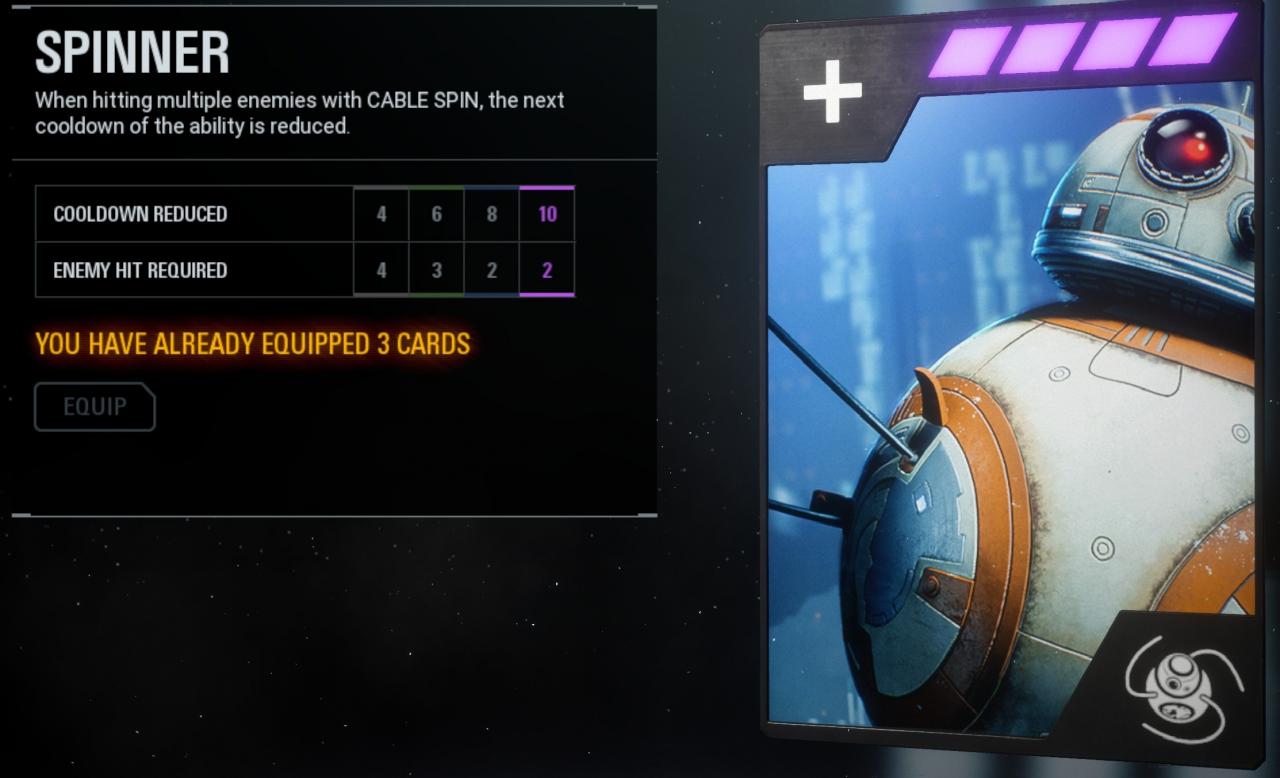 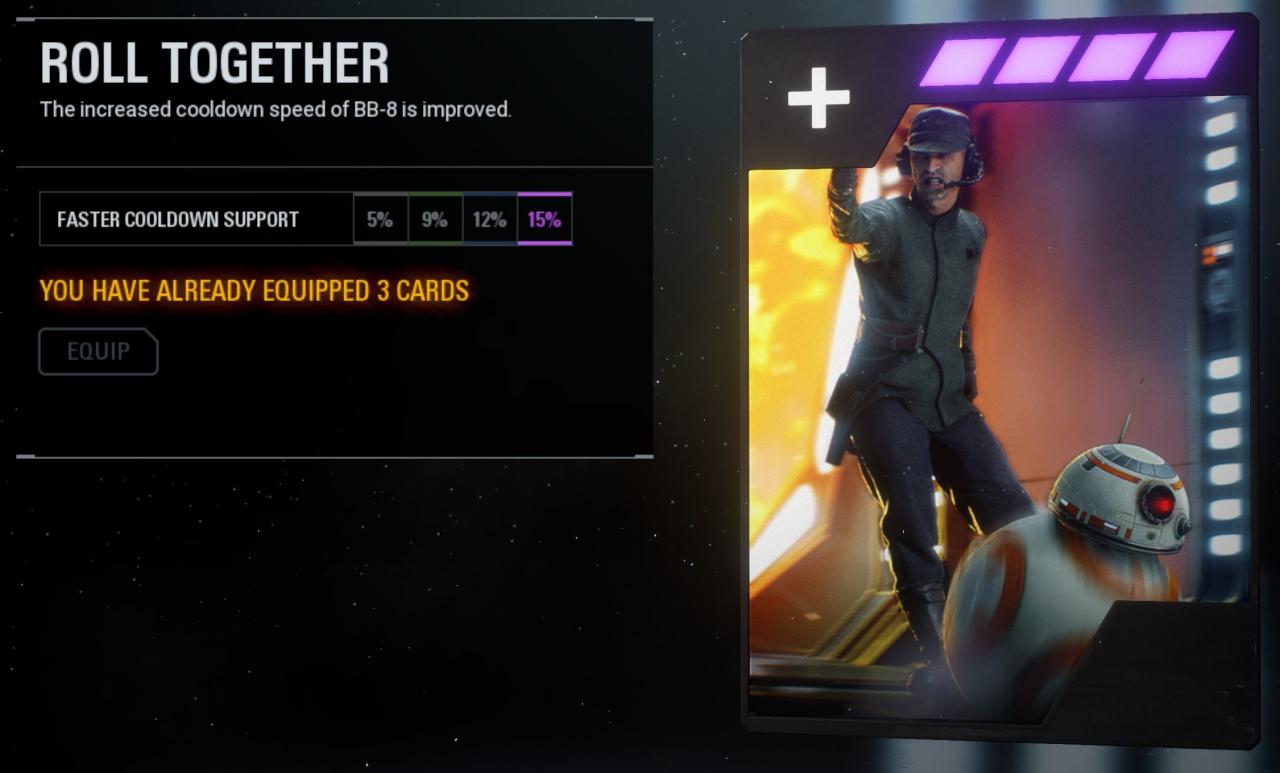 Roll together increases BB8’s swift ability passive ability, which decreases the cooldown speed for his allies, it does not affect BB8’s ability cooldown. This card is also useless as you need to be almost right beside your allies for swift reaction to be in effect. 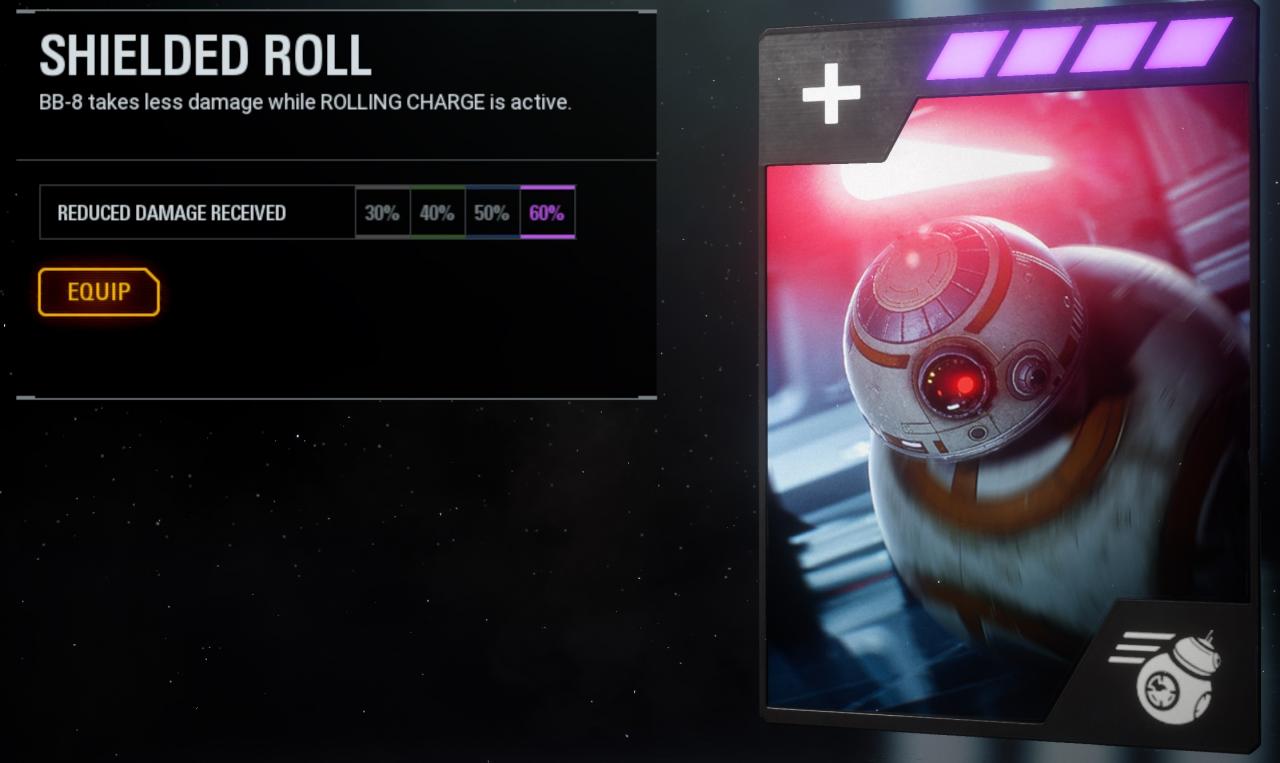 Shielded roll is useless, as any lightsaber hit or explosion stops this ability, and charging at enemies from a distance isn’t how this ability should be used, making it quite literally useless, unless you want an entire card just to run away quickly. 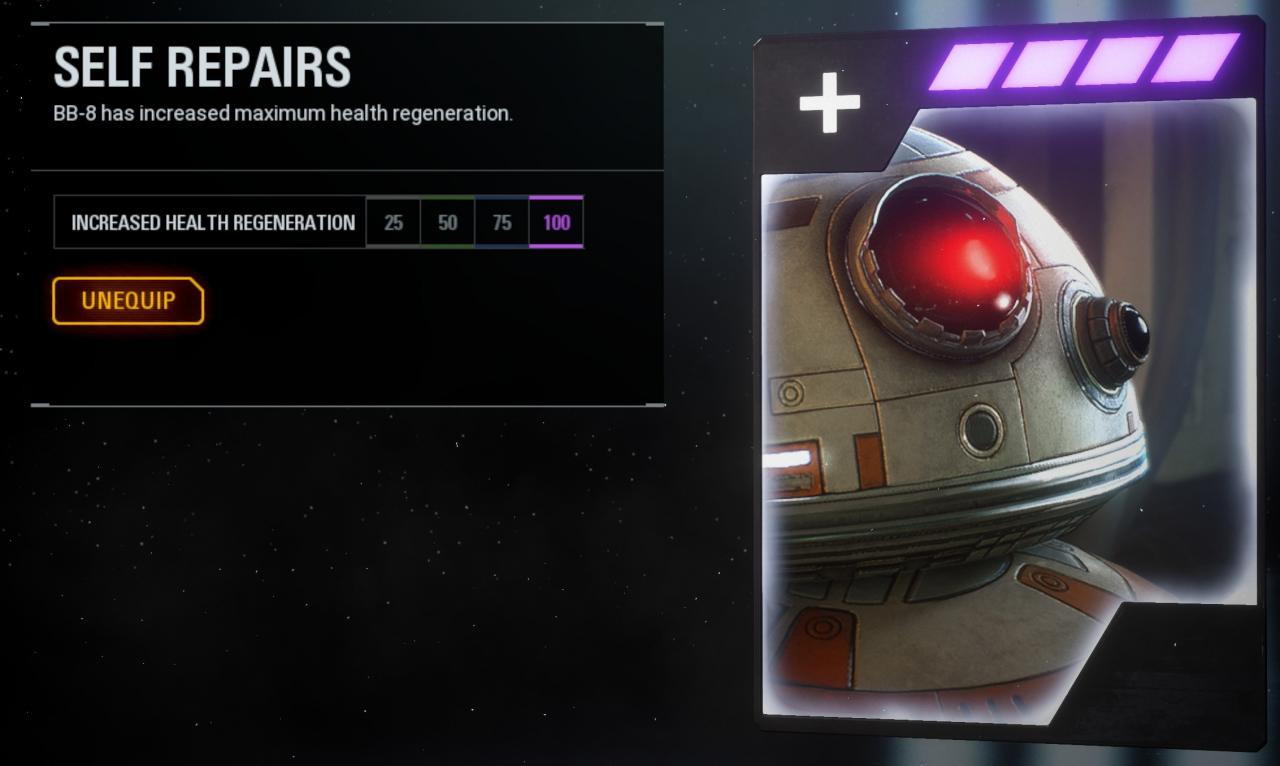 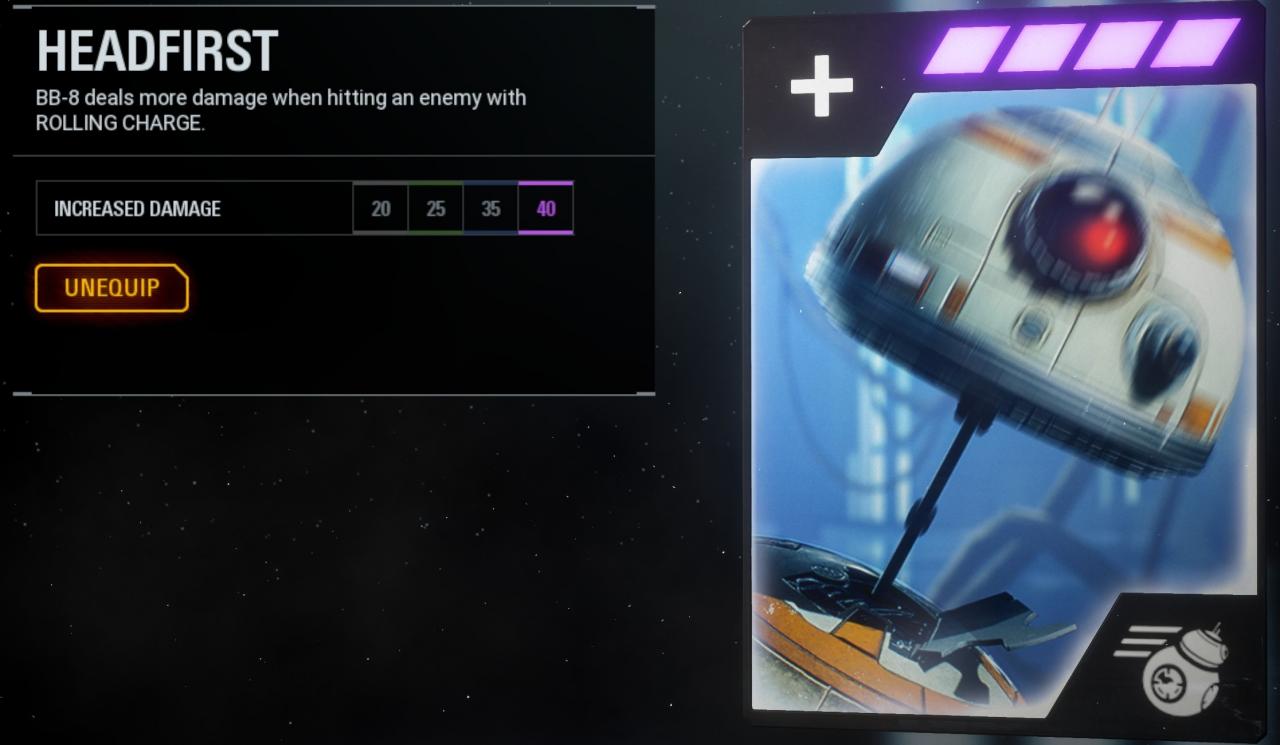 The second card I recommend is headfirst. This will increase the damage of BB8’s rolling charge attack from the base 150 on heroes up to 190 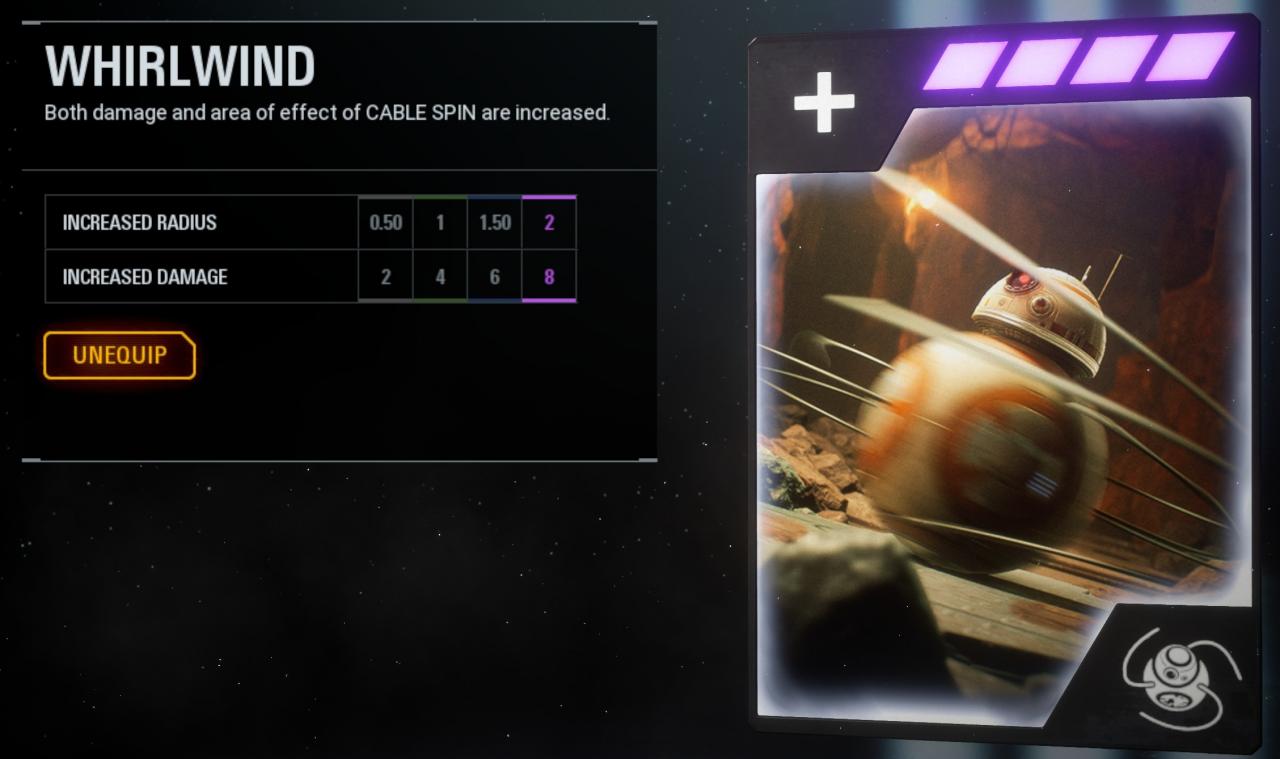 The third hero showdown card I recommend is Whirlwind. This card increases BB8’s cable spin damage from 45 up to 53 at max, dealing roughly 177 damage every second. Whirlwind also increases the radius of cable spin from 5 meters up to 7 meters

Star Cards for Heroes vs Villains

Self-repairs, again for the large health regen pool of 400 health. 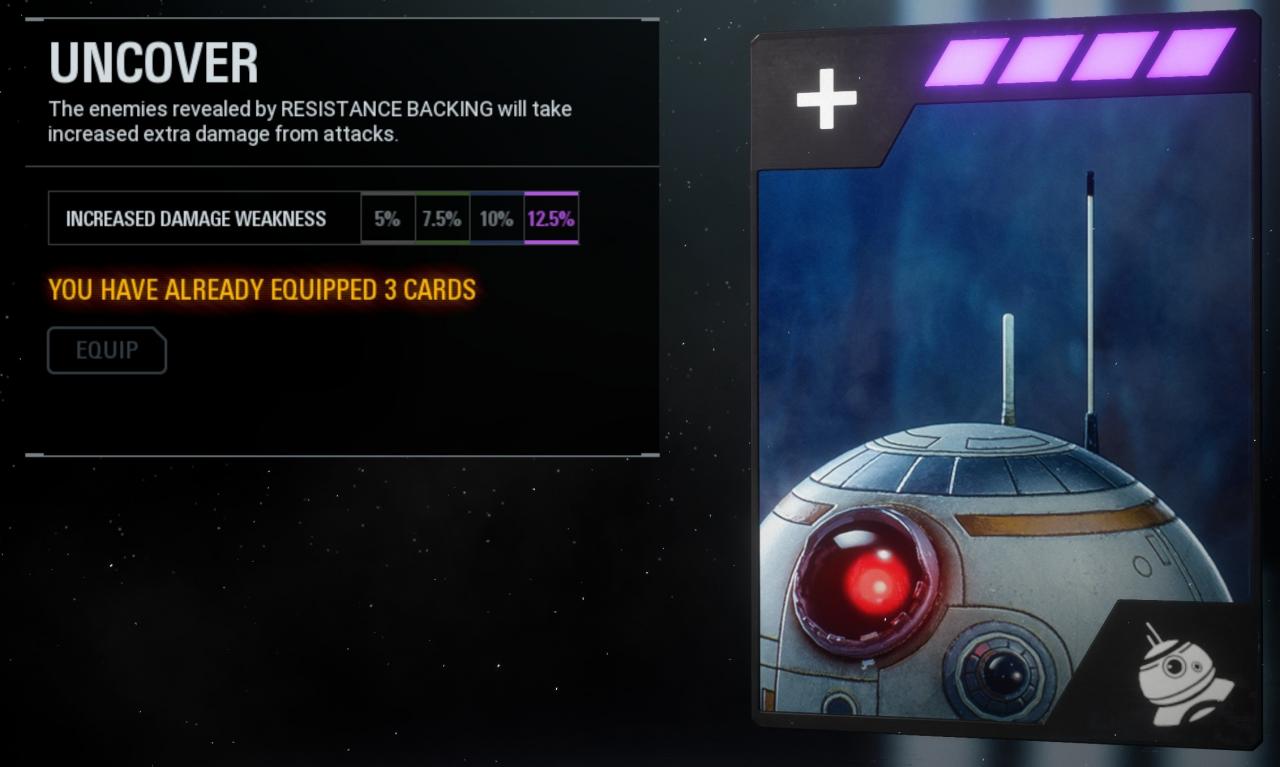 Second card I recommend for HvV is uncover, this card is best for HvV as you’ll be next to teammates with lightsabers that do a lot of damage, and in HvV BB8 is more of a support hero. This card increases BB8’s resistance backing weakening ability from 5% up to 17.5%.

I’d say stick with whirlwind for HvV as well for that extra damage and radius on cable spins, as most villains will be swinging at the saber or blaster heroes, they mostly won’t be focusing on BB8, and you’ll be able to get in some extra damage. but you can there is an alternate third card you can use if you don’t find this card appropriate for HvV.

This is really the only alternative card for HvV I can say is useful, as previously stated this card requires multiple hits to take effect, not concurrently though. It decreases the cooldown time of cable from 25 seconds to 15 at max.

Once again, self repairs for that extra health regen of 400 at max. 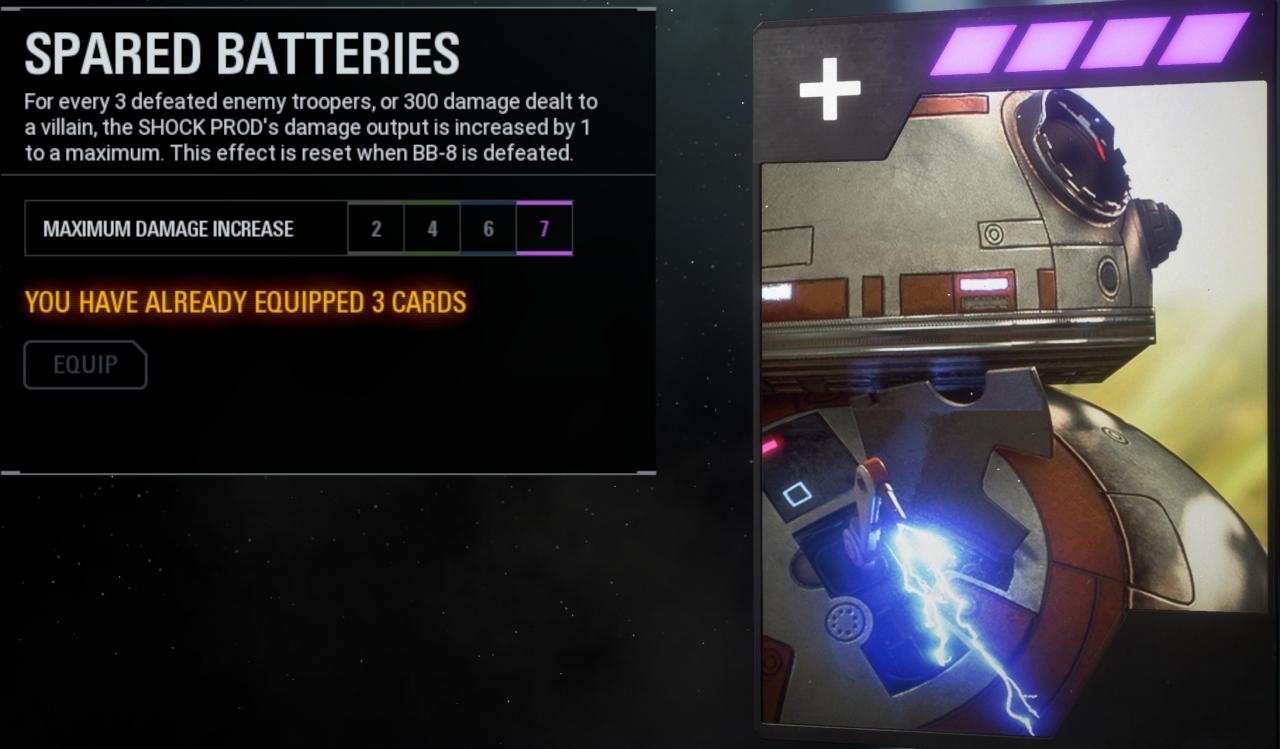 The third and final star card for supremacy/GA is spared batteries, This card increases BB8’s shock prod damage by one for every three troopers defeated, up to a max of 7. With this card at max damage increase BB8 will do 120 damage every second with his shock prod.

Whirlwind can also be used, but I highly recommend spared batteries over it in trooper modes as cable spins kills troopers very quickly.

Abilities
First are BB8’s passive abilities. BB8 captures objectives faster than other troopers and heroes, because he counts as two units when capturing an objective. His second passive ability, Swift reaction decreases the cooldown of allies abilities by 5%, the area of effect for this ability is ~7 meters,

Combat Abilites
BB8’s first ability, Resistance Backing, scrambles enemies radars, reveals enemies to him and his team, as well as weakens revealed enemies by 5%. This ability has a radius of 20 meters, lasts 12 seconds, and has a cooldown of 18 seconds

His second ability cable spin, deals ~150 damage every second to both troopers and heroes, killing any base class and reinforcement in at most 2.5 seconds if they are not health boosted. This ability deals the same amount of damage to villains. Cable spin lasts 8 seconds, and has a long cooldown of 25 seconds

The final ability, rolling charge, deals 200 damage to troopers, and 150 to heroes. Rolling charge has the ability to knockdown troopers and heroes, if the heroes are not blocking with their sabers. This ability has a cooldown of 10 seconds. There is also a glitch on this ability, which allows you to chain it together if you need to run away, if you cancel the ability at the end of the charge, it will restart and you’ll continue the rolling charge, it’s hard to time but can be learned easily.

Play Style
For Hero Showdown, your best friend in this game mode is your dodge, dodge in circles, left and right, around whoever you’re facing, your abilities are best used in conjunction with each other in this mode. I like to activate resistance backing, then rolling charge, and if they get knocked down, activate cable spin, use your shock prod to prevent the heroes from regenerating, as it won’t be the main way you cause damage, but as a way to keep their health lower.

In HvV, stay close to your teammates, use resistance backing to let your saber hero teammates do a little more damage, and rolling charge to give them a chance to hit the enemy while they’re down. As most enemies will be focusing on saber heroes, come up behind them and shock/cable spin them.

In trooper modes, flanking the enemies and using your cable spins is the best way to clear objectives, use your size to your advantage, it will be easier to get behind the enemies as most of them won’t see BB8 rolling, and he has a small hit box that most players struggle to hit. Since BB8 captures objectives twice as fast, use that to your advantage, stay on objective where enemies won’t see you immediately, there’s spots you can go to that are harder for enemies to see on most objectives.