STAR WARS™ Battlefront™ II: How to Use Darth Maul

Intro
Darth Maul is one of the Sith lightsaber wielding heroes available in battlefront 2. This guide will show you how to effectively use his abilities and star cards in order to maul the enemies with Maul.
Star card 1 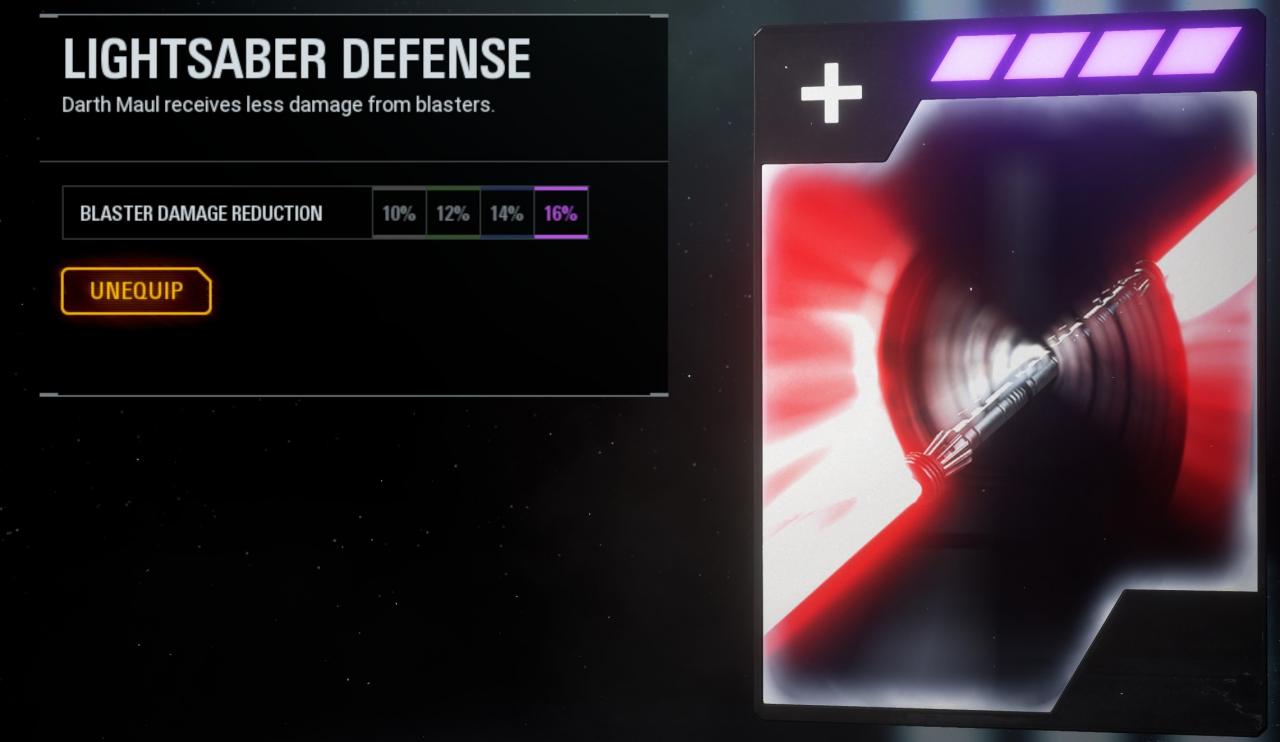 The first star card you should be using is lightsaber defense, being able to receive less damage from blasters is useful in both attack and retreat. The less health you lose from taking damage from blasters, the closer you will get to getting full health from every kill. The 16% decreased damage from blasters may not seem like that much, but i assure you when you are surrounded by enemies, or being shot at from a distance you cannot attack from, this card will save you. 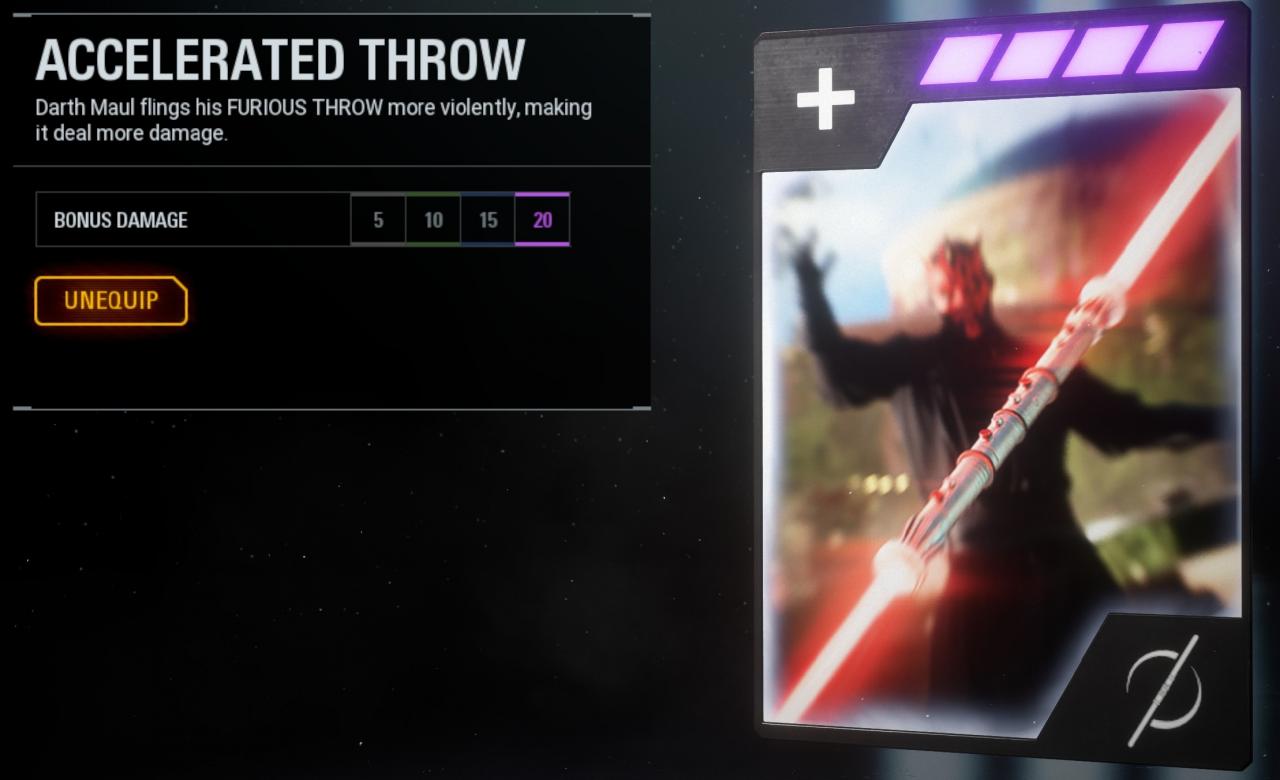 The second star card you should be using is accelerated throw. The accelerated throw card increases the damage of Mauls throw on initial throw and the return impact. The first level of this card increases the base damage of 85 to 100, every other level of this card increases the damage by 5, up to 115 damage, making Maul capable of inflicting up to 230 damage if the lightsaber hits on both the initial throw and return, killing any base trooper class, as well as the aerial class. The increase of damage is also useful for dealing damage to other heroes from a maximum distance of 20 meters. 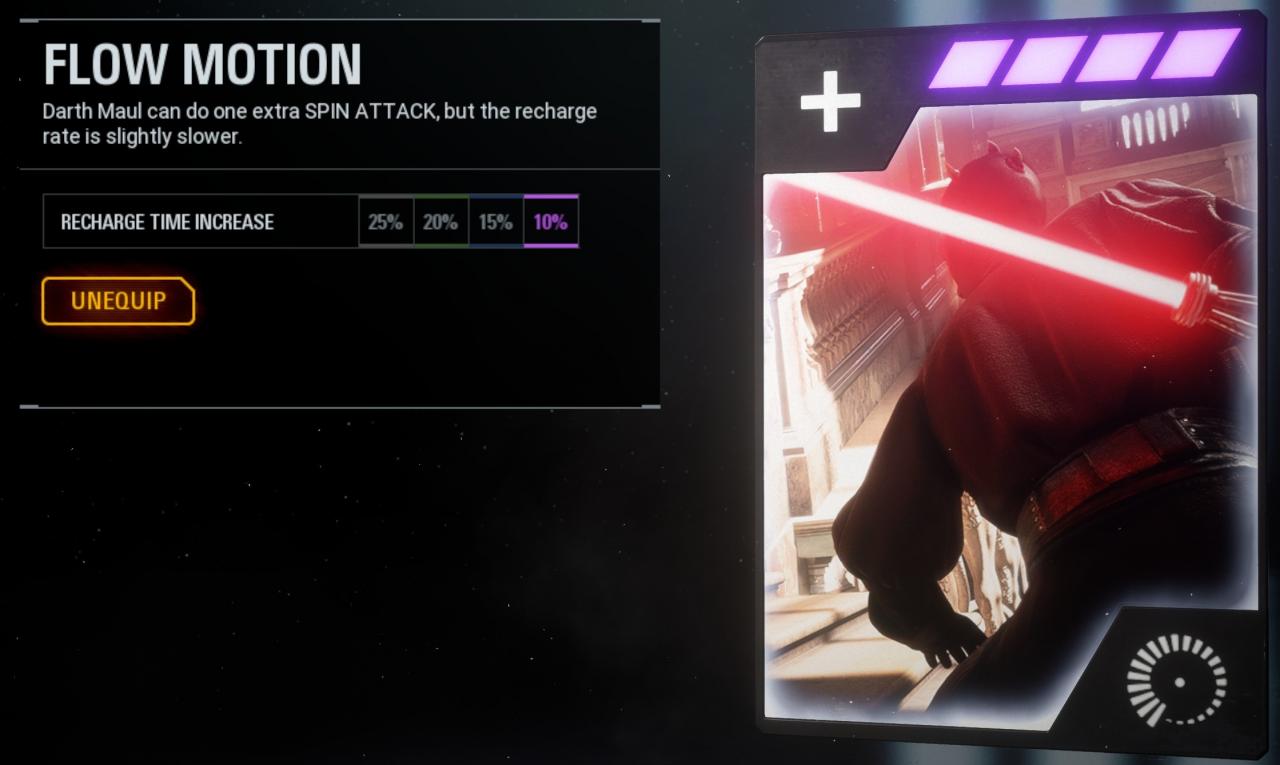 The third card I suggest you use is Mauls Throw Motion. This card gives Maul the ability to do one more extra spin attack, at the cost of a slower recharge rate. Without this card equipped Mauls default recharge time for one spin is 5 seconds, at level 1 with this card equipped the default recharge time is 6.25 seconds per spin attack; each level roughly decreases the cooldown time for each spin by about 0.23 seconds, down to a total cooldown time of 5.5 seconds, per spin, giving a total recharge time of 16.5 seconds, as opposed to the default 15 seconds. The extra 1.5 seconds doesn’t make much of a difference considering you gain an extra attack in that time. 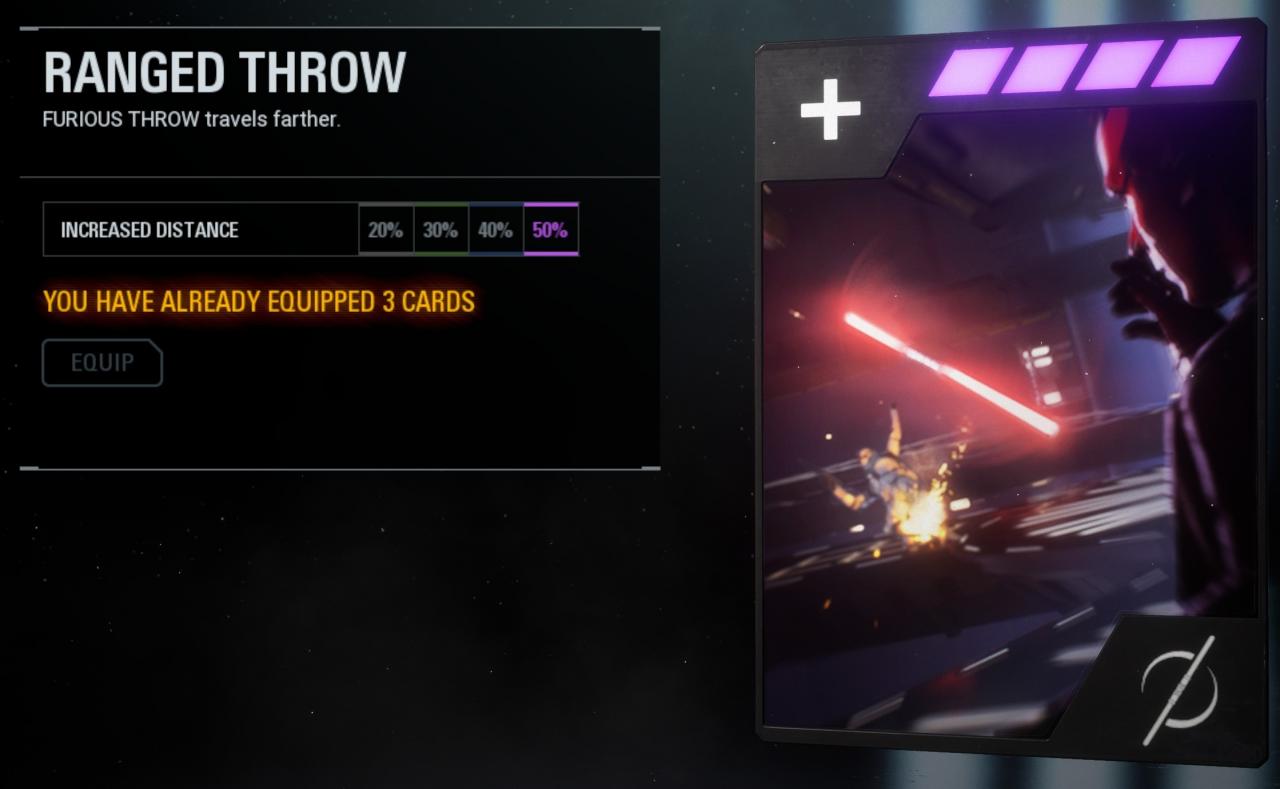 The only other star card I can recommend using is ranged throw. The base throw distance as mentioned earlier is 20 meters, this card increases the distance initially to 24 meters, and and extra 2 meters each level up to 30 meters. If you’re going to use this card you should use it in conjunction with Mauls accelerated throw, in order to buff his lightsaber throw as much as possible. If you’re good at defense with Maul or are playing heroes vs villains, use this card as lightsaber defense will mostly be useless in that game mode

Abilities
The first ability Maul has is his lightsaber throw, the best way to use this ability is to take out or damage a few enemies that are too far away to hit with your lightsaber; 20 meters is the max range of his throw, and each hit deals damage, meaning if you hit on the initial throw it does damage, and it also deals damage on the return to Maul. I find this ability the best to use if there is a lone trooper a decent distance away from you, as the return hit will kill any base trooper and aerials if you are using the accelerated throw card.

The second ability, is in my opinion, the most useless ability Maul has in terms of getting kills, the choke hold should only be used in two circumstances. One is if there is a large group of enemies in front of you and you need to clear the area, since the ability only at base deals 77 damage, you won’t get too many kills in this scenario, but you will effectively clear a path for your team, and will get multiple assists. The second scenario this card comes in handy is getting heroes away from you, if you need to retreat to regain health, or there is somewhere a rival hero can fall to their death, use this ability, but remember that if you are dealing with a lightsaber wielding hero, if they are blocking you cannot choke hold them.

The third and final ability is the lightsaber spin attack. I use this ability if there are two or three enemies infront of me that are kind of parallel to each other or behind each other. At base the spin deals 100 damage, two spins kills any base trooper, as well as aeriels. This attack can also deflect blaster shots while you are lunging forward, if you use this attack on an enemy in front of you there is a chance you can deflect some blaster shots back to them. Using this attack twice in a row to kill enemies also makes it a lot harder for them to hit you as you do move quite fast, decreasing the chances that you will take damage, while dealing a lot of damage to them. If you use this ability with one spin left, you can easily kill every classes with one or two lightsaber hits after the spin. I recommend to always try to keep at least 1 spin in your arsenal for retreat.

Play style
A good Maul player should always be on the move, never be within 10-15 meters of where you previously were 2-3 seconds ago. His speed combined with his dodge, and lightsaber spin should make this easier, this is why I say you should keep at least 1 spin available at all times, and why flow motion is the most useful Maul card. The spin is not only useful for attack, but also for moving around quickly, specifically for retreat. The only acceptable time to use all your spins is fighting heroes, I use all my spins in rapid succession usually, dealing at most 300 damage and quickly moving back and forth between the enemy, the spin combined with your lightsaber throw will make dealing with other heroes much easier, the faster you can move, the easier it will be to kill heroes. To deal with troopers running away from you, use one of your spins to get closer to them, than use a lightsaber throw, by the time your saber returns to you your spin will be recharged. If you bite off more than you can chew, use all his spins if you have to retreat to safety, this is where the extra spin attack from flow motion will come in handy the most, and is where I use it the most; if that isn’t enough use both of his dodges as well, but you should have enough separation from you and the enemy with just the three spins. Only use you choke hold out of desperation to clear out groups of enemies in your way if retreat is not possible, or again, if you can throw an enemy hero off the map.
By Maul

A (somewhat) complete reference of the maps, along with some tips & strategies.   Map mechanics & general tips Map...

Step by step guide to reach the secret ending in the level "The cursed house"   Step 1: Study Move to the study cam. Click on...

In this guide i hope to show you how you can use the CutScene command to experience the new intimacy POV cutscenes.   0....

A quick and easy guide to Mercenaries in Rome Total War. This Tier List was created by Gaius Victor, if you have any other option, please...