This guide covers the basics of battles, the main characters and what their abilities are, and the enemies you meet with specific strategies for defeating each one (I would skip this last section unless you are struggling, as it’s more fun to come up with strategies on your own). 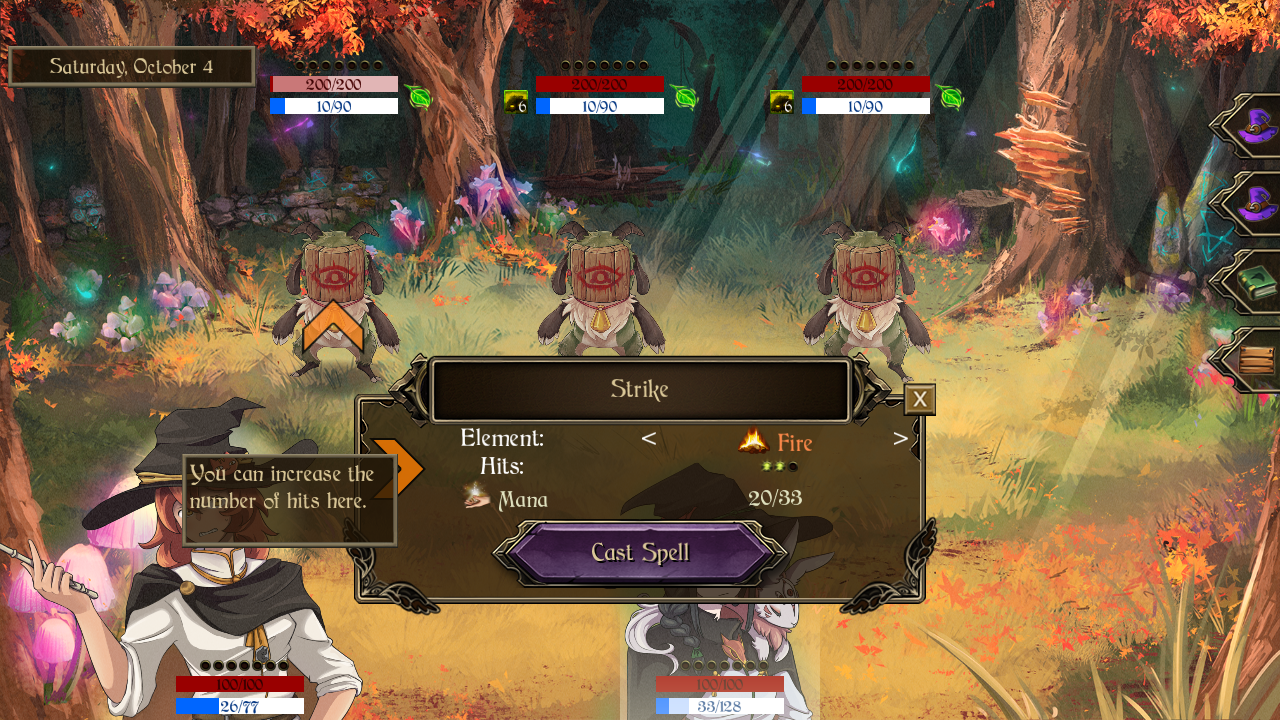 Griselda learns spells based on what classes you take each week. You can look at the Spell List tab of the Encyclopedia to see a list of all spells, and at what class you learn them. Strike, Pact and Sense are all useful first level spells that Griselda doesn’t have. However, don’t stress too much about what spells you learn, as the battles are designed that you can win them even if Griselda never takes a single class.

If you do teach Griselda Strike, unless you also teach her Elemental Strikes she will only be able to use fire-type strikes. They will also be weaker than Dianthus’s fire strikes, as Dianthus has higher Bravery than Griselda, so it’s usually best to use Griselda’s strikes to clear barriers, and use Dianthus for the actual damage dealing.

Over the course of the game, Dianthus will learn:

Light/Attract (from her Summoning classes) – same as Griselda’s Light and Attract spell. But, useful if you need to cast them and Griselda is out of mana.
Wave – The same as Strike, except it hits all enemies, costs twice as much mana and can not miss. Usually, you want to pick off one enemy at a time with Strike (as it takes mana to breech defenses), but against multiple enemies relying on Shadows/Decoy, this can be worth it as it cannot miss no matter how many stacks of Shadows the enemy has.
Strike Mastery – This adds a Type option to Strikes – you can hover over them to read descriptions of them all. I usually do Homing strikes, as like with Wave, they cannot miss.

At this point, I recommend you try fighting the enemies yourself and use the above to come up with strategies to defeat them. However, if you’re struggling with a specific enemy, here’s some tips on each one.
Red-eyed Faun

These enemies are relatively weak, have no barriers, and only two attacks. The only thing that makes them dangerous is Sever. Like Dianthus’s Sever, this will lower your mana regeneration until you can only generate 7 mana per turn. There are 3 general strategies to defeating them:

While they don’t have much health, they can cast a LOT of barriers and have a Decoy which will dodge the first hit of every attack unless you cast sense on it, making them one of the hardest enemies to actually injure. They also have the dreaded Spectral Wave, which like Wave is a ranged, undodgeable attack, but it also clears one random buff per hit. That means Link, Shadows and Intimidate are pretty useless against them. However, there are many ways to deal with them:

With high health, barriers, hard exoskeleton and regeneration every turn, Pact is probably your best option if Griselda has learned it. Unfortunately, even when pressured, Dianthus still won’t use Pact. But, it is possible to defeat without Pact (even on Hard where it has a lot more regeneration per turn). Luckily, with a defensive Air witch and an offensive Earth witch, you couldn’t pick a better pair of witches to deal with the Knightbane.

To avoid spoilers, I won’t name the boss here. But, the biggest issue you’ll have with it is its Siphon ability. Every other turn, it will use Siphon to steal all mana from one witch, leaving them unable to cast anything, and applying a weakness debuff. The other turn it will use that stolen mana to fire element-less strikes. The stolen mana lets it strike enough to kill an undefended witch in one or two attacks. However, since it doesn’t attack on the turn it Siphons, you have two turns to prepare for the strike – even if one witch will have no mana for one of those turns.

Thanks to David Maletz for his great guide, all credit to his effort. you can also read the original guide from Steam Community. enjoy the game.